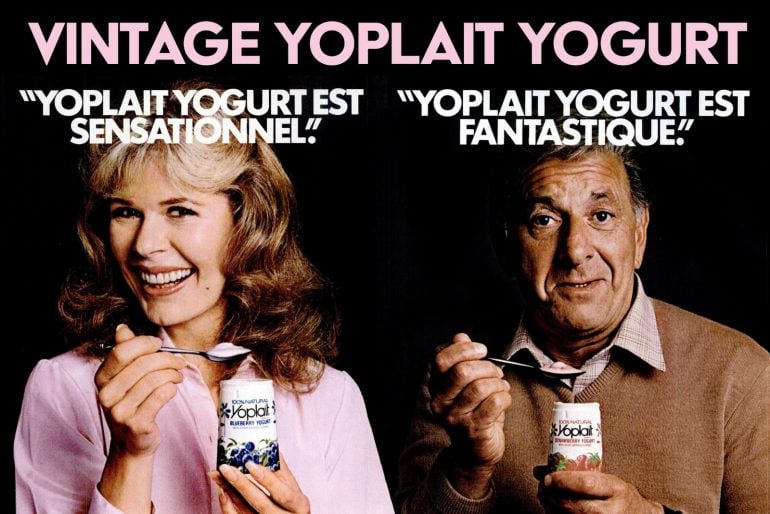 During the first few years that Yoplait yogurt was sold in America, the company — a subsidiary of General Mills — played up the brand’s French origins, and paid several American celebrities to promote the product.

But not only did they show off the yogurt, they spoke with delight about how wonderful Yoplait was… and they did it all en Français.

Excerpted from an article by Martin Rossman in the Clarion-Ledger (Jackson, Mississippi) August 30, 1979

Jack Klugman speaking French? Sure, and next you’ll see Muhammad Ali dancing with a ballet company.

No, really, you’ll see the actor in a commercial these days pushing Yoplait yogurt, which has its origins in France.

Klugman can be seen seated in a kitchen trying the product. An off-camera announcer says: “The yogurt of France is called Yoplait. Some Americans don’t know about it… yet.”

He goes on to say that when Americans do try it they find it different and creamy, with real fruit. He adds: “It’s just amazing what happens when a real American gets a little taste of French culture.”

Actress Loretta Swit of M*A*S*H and Dodgers manager Tom Lasorda carry on much the same.

The product also is being promoted by a large yellow hot-air balloon and by sampling at festivals, marathons, shopping centers and large businesses. 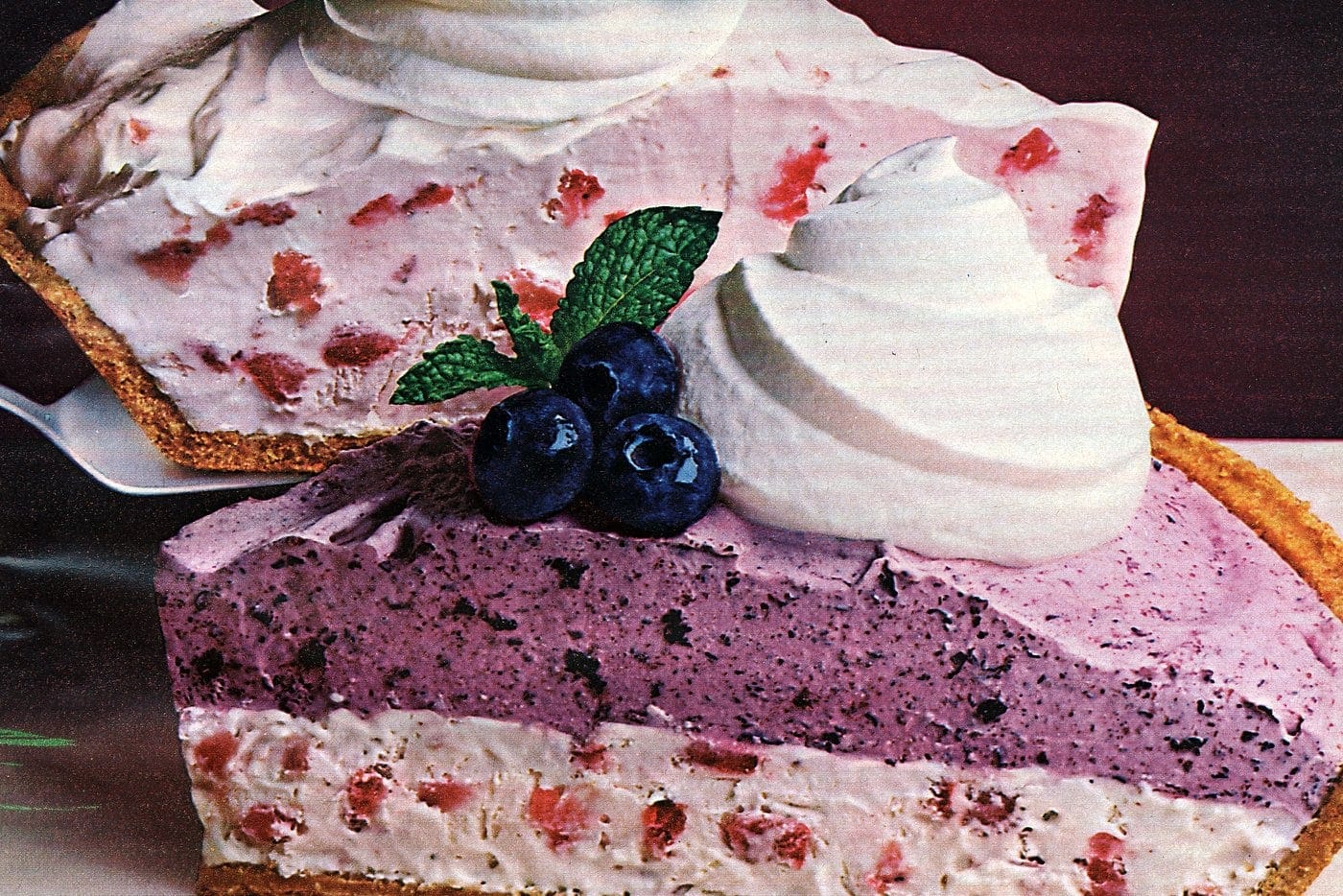 Yoplait, the yogurt of France, is now made in America. And when real Americans get their first taste of it, they’ll say it’s different. It’s surprisingly creamy, amazingly

smooth. It’s all-natural yogurt with active cultures and real fruit mixed throughout. Or, in other words, as Judd would say, “Yoplait est delicieux.” 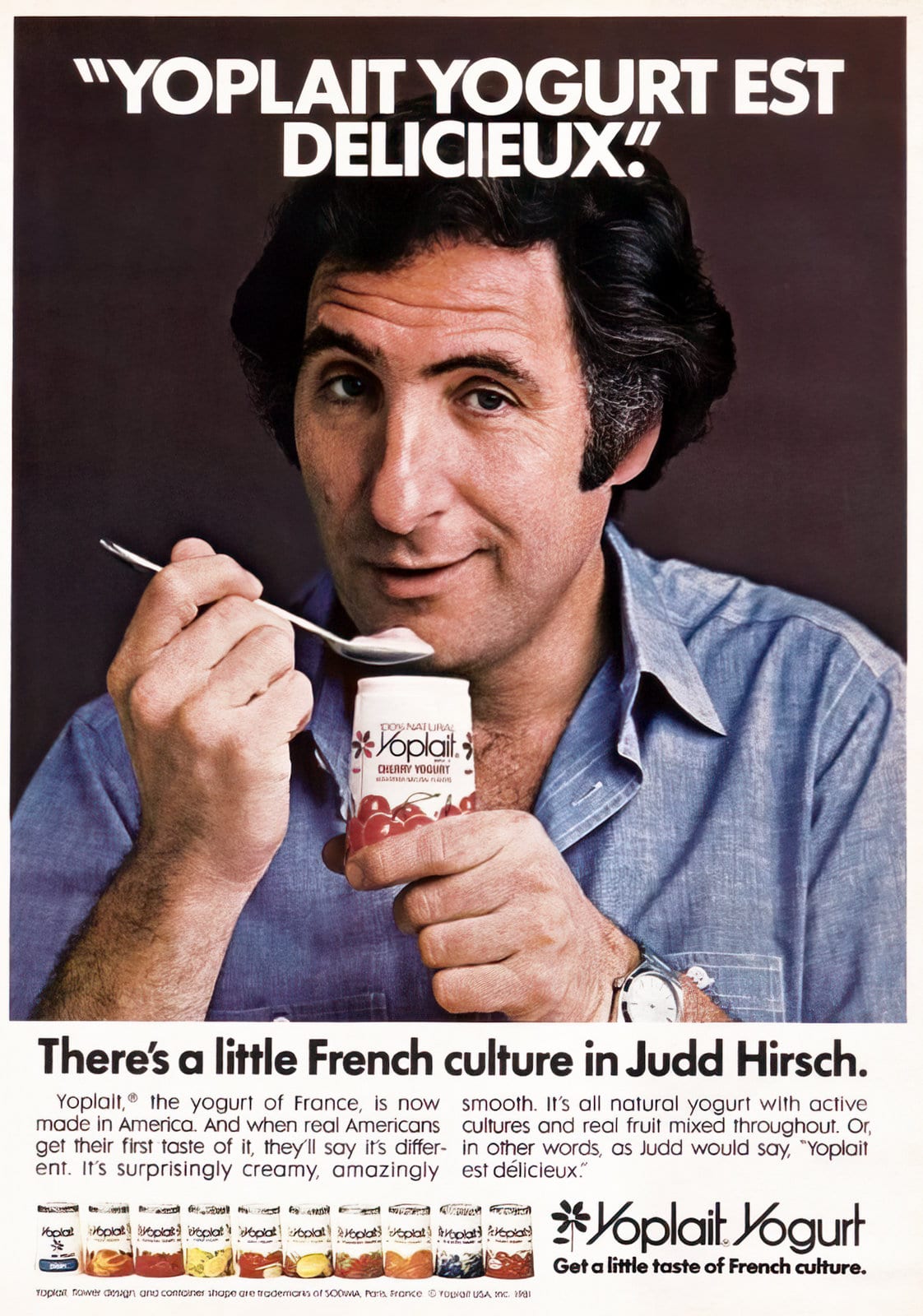 Yoplait, the yogurt of France, is now made in America. And when real Americans get their first taste of it, they’ll say it’s different. It’s surprisingly creamy, amazingly smooth.

It’s all-natural yogurt with active cultures and real fruit mixed throughout. Or, in other words, as Loretta would say, “Yoplait est sensationnel.” 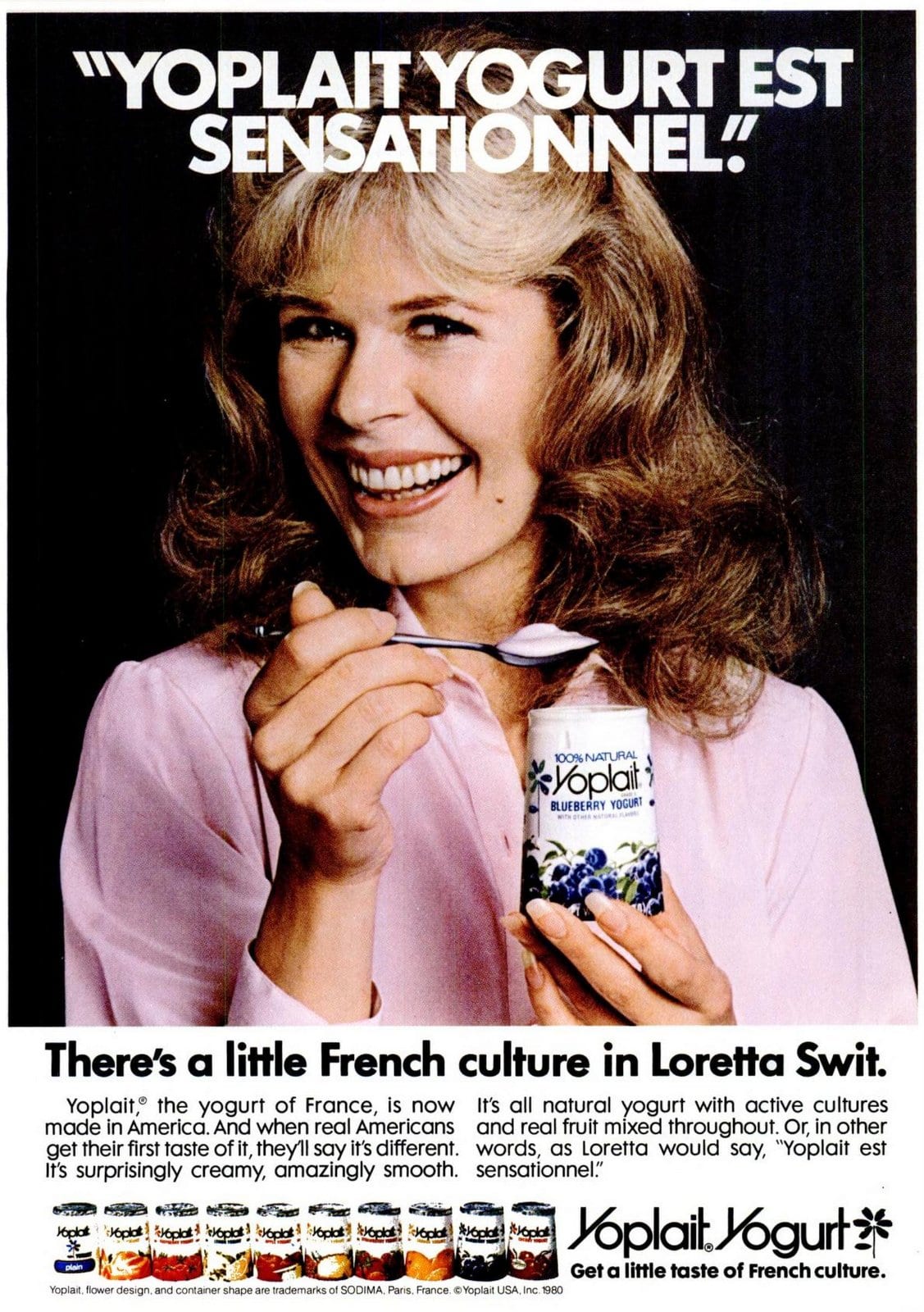 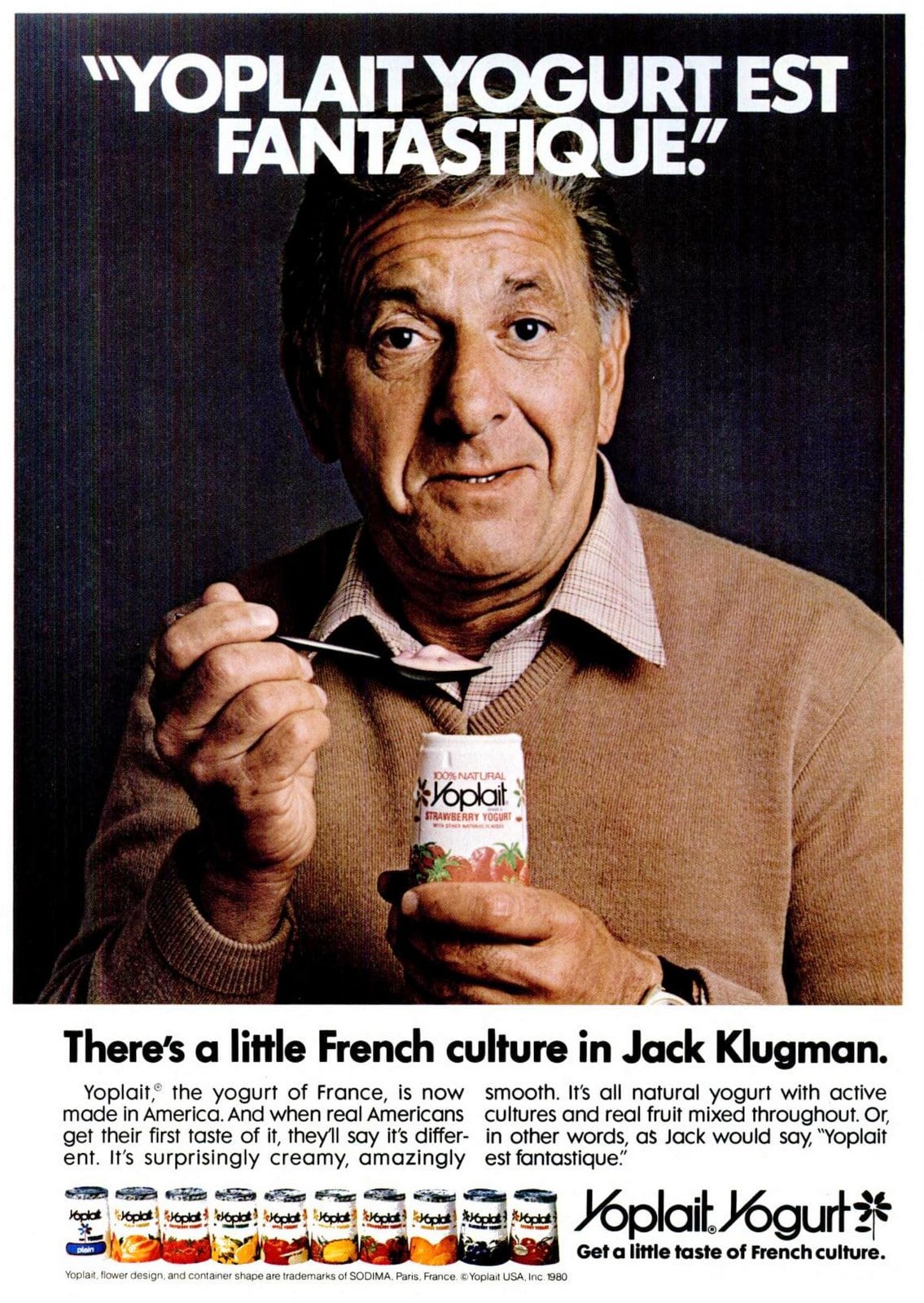 The yogurts of Yoplait, with Tommy Lasorda

AMERICA GETS ITS FIRST TASTE OF FRENCH CULTURE.

With a yogurt called Yoplait. A one hundred percent natural yogurt with active yogurt cultures imported from France. And real fruit mixed throughout.

And a taste — so incredibly smooth and creamy our first spoonful left us feeling “Merveilleux! Fantastique! Sensationnel! Fabuleux et incroyable!”

THEN WE GOT OUR FIRST TASTE OF “CUSTARD STYLE” YOGURT.

Next, Yoplait gave us a yogurt even the most imaginative gourmet couldn’t have dreamed up. “Custard Style” yogurt.

A yogurt with all natural ingredients and real fruit puree blended into a texture that’s so wonderfully thick it might be mistaken for fine French custard. The whole idea was so deliciously new So “Revolutionnaire!” 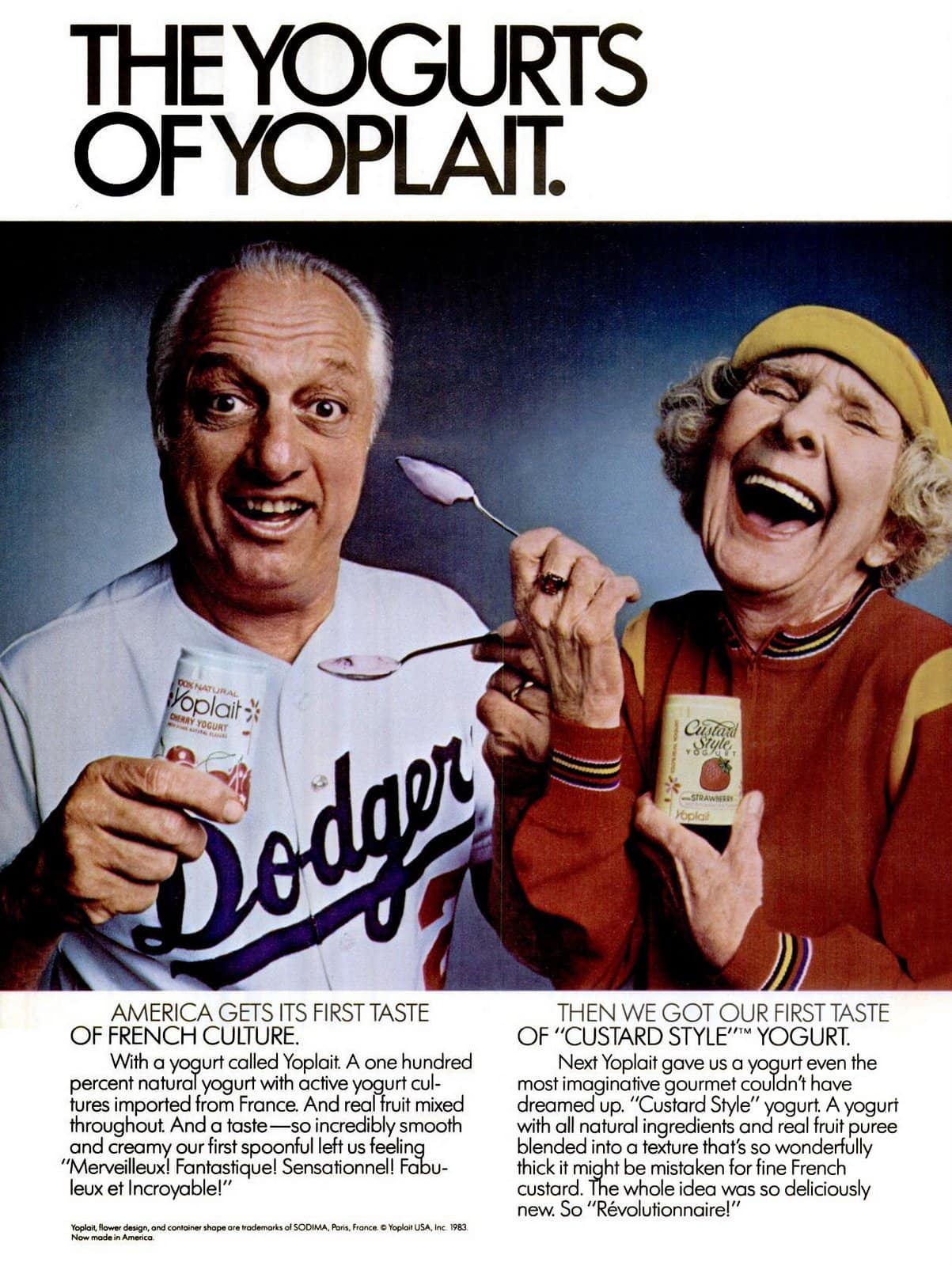 There was once a great innocence in America. Our people had experienced no yogurt of sensational taste. We knew mainly of tart-tasting yogurts with fruit preserves on the bottom. Suddenly that all changed.

Just as the ever insatiable American was wondering, “What more could Yoplait give us?,” Yoplait answered with walnuts, and chewy wheat grain, and many varieties of real fruits. All of which Yoplait put into “Breakfast Yogurt.”

This awakened America to a yogurt so substantially more in taste and texture, each spoonful was truly “Extraordinaire!”

NOW THOSE OF US WHO DREAM OF TASTING ALL OF LIFE’S GREATEST PLEASURES CAN ONLY WONDER… WHAT’S NEXT? 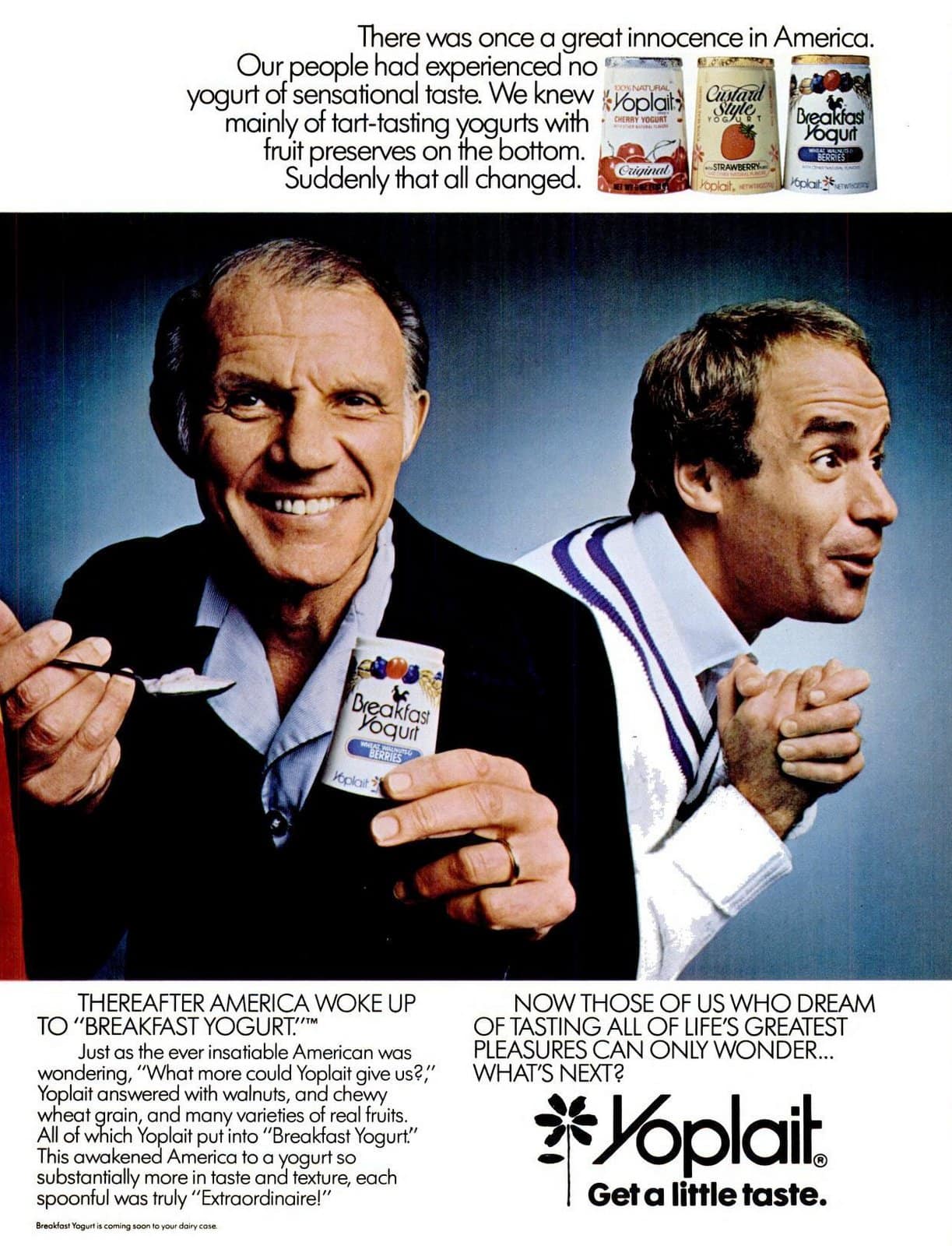 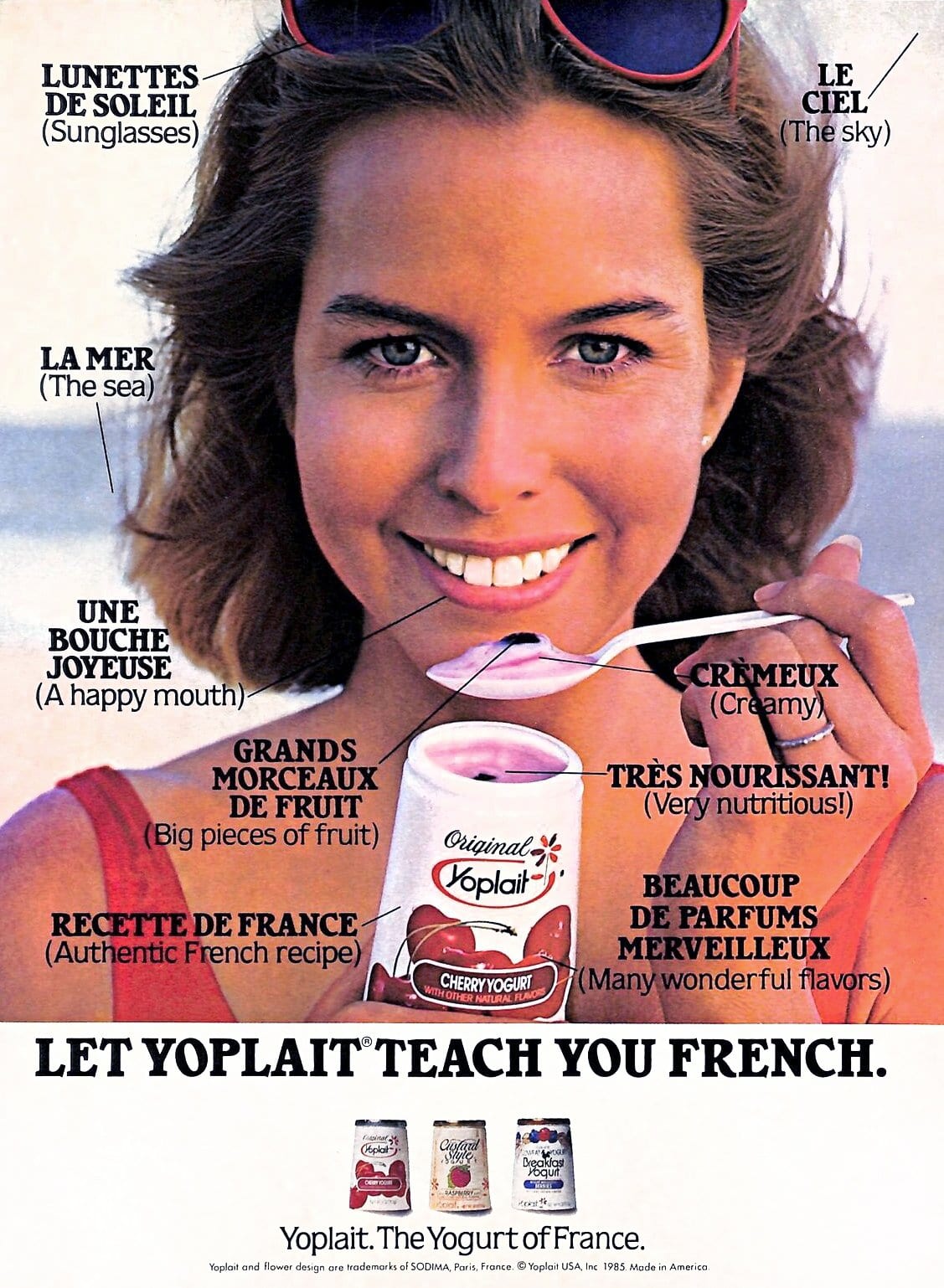 Teri Garr tells you why to eat Yoplait yogurt (1987)

In her own words, Teri Garr tells you why you should eat new thicker, creamier Yoplait.

“First of all, because now Yoplait is thicker.

“Second of all, because its creamier.

“Third of all, because it’s still 100% natural and really very good for you.

“Fourth of all, because to me, Yoplait tastes better than all those other yogurts.

“And fifth of all, because… well, just because.”

New thicker, creamier Yoplait. Taste how good yogurt can be. 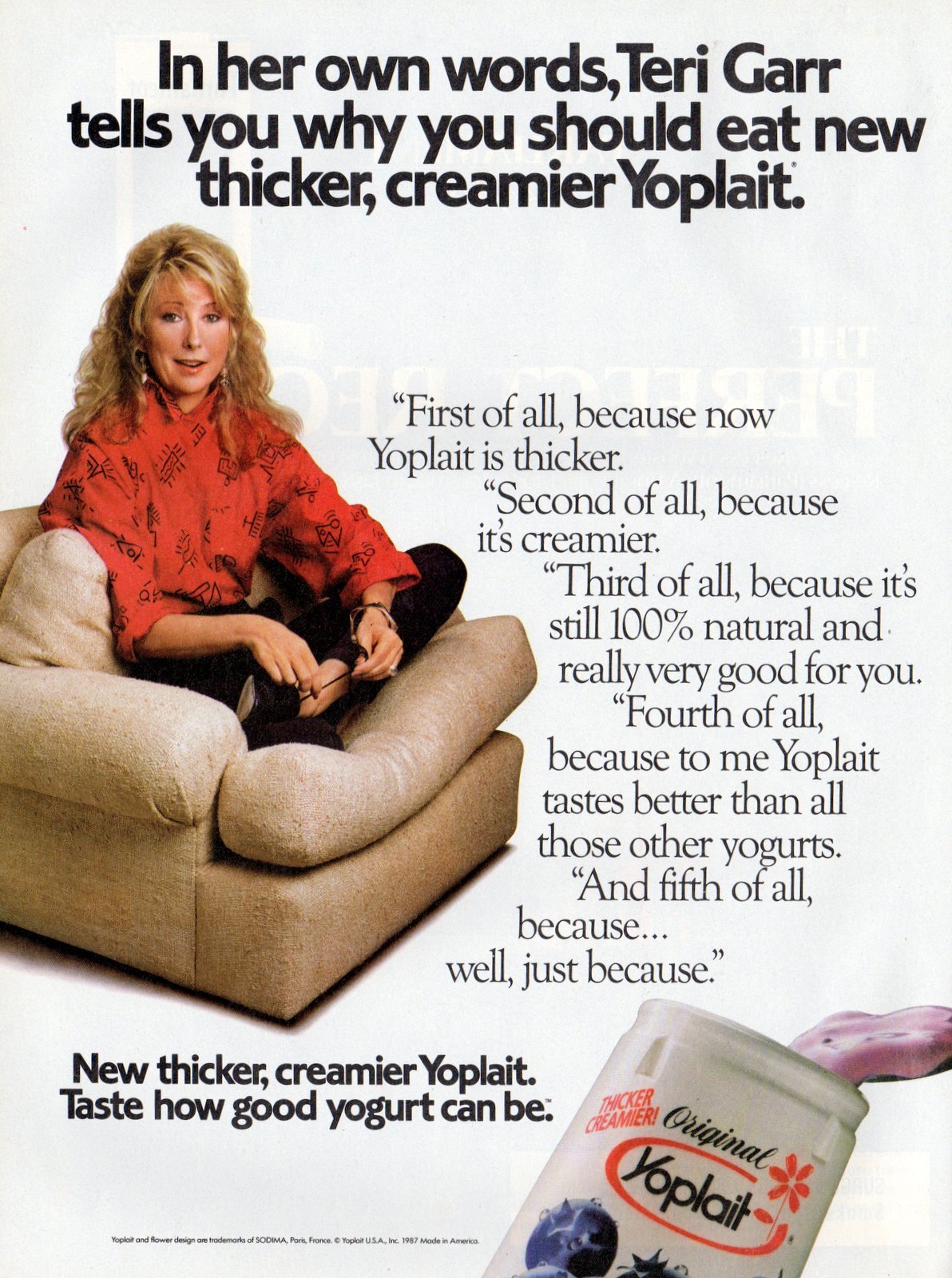 At last. Finally, Mmmm. It’s about time. And only 90 calories. Introducing New Yoplait Light. With NutraSweet.

Only 90 little calories. And all the wonderful, creamy taste you’d expect from Yoplait Mmm. Yes. New Yoplait Light. The Light at the end of the tunnel. 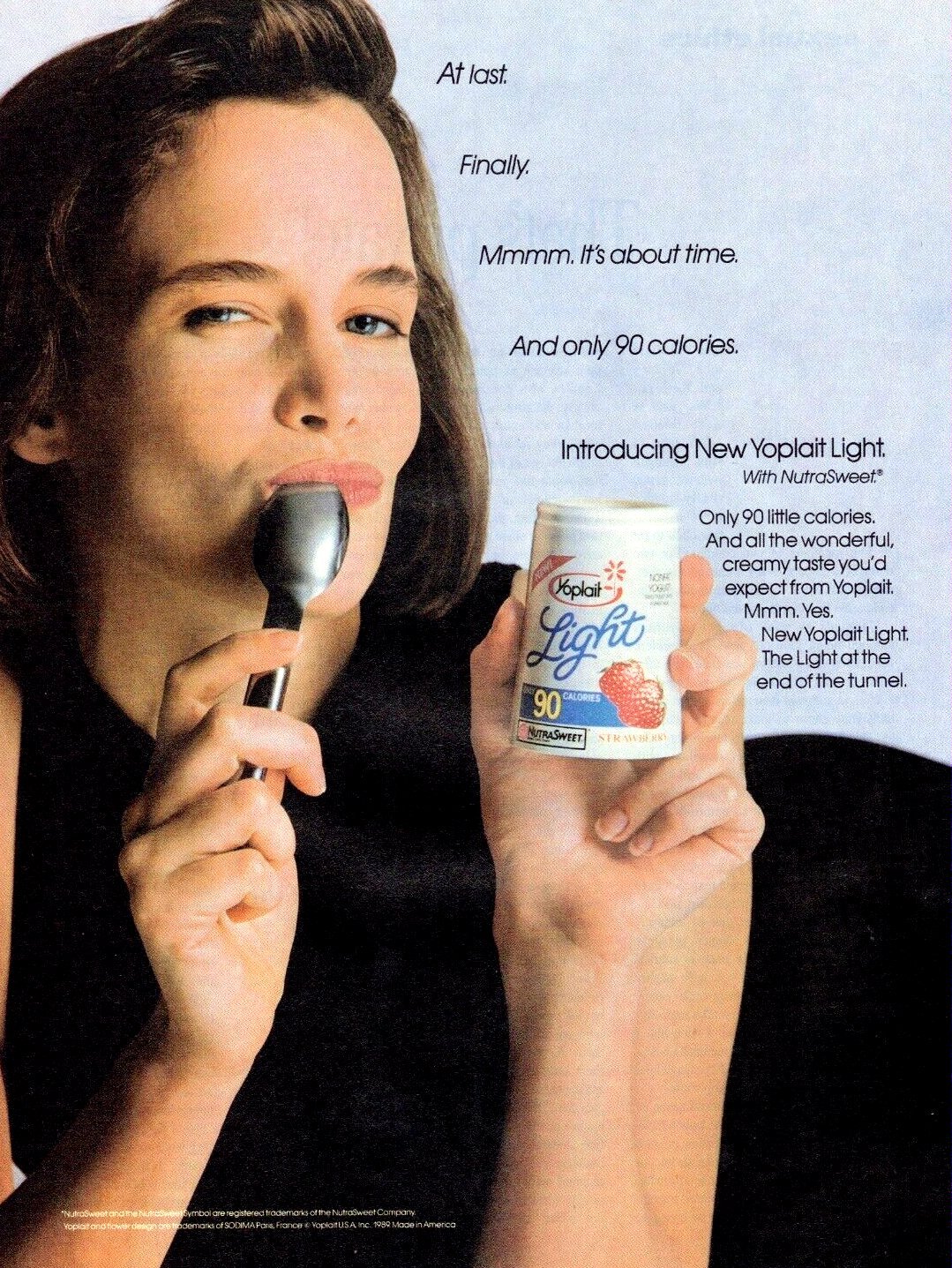 Recommended by 9 out of 10 pediatricians.*

Gobbled up by 10 out of 10 kids. A good source of calcium and protein. With a taste kids love.

* In a recent survey of more than 600 pediatricians, 9 out of 10 said that they would recommend Yoplait Custard Style yogurt for children. 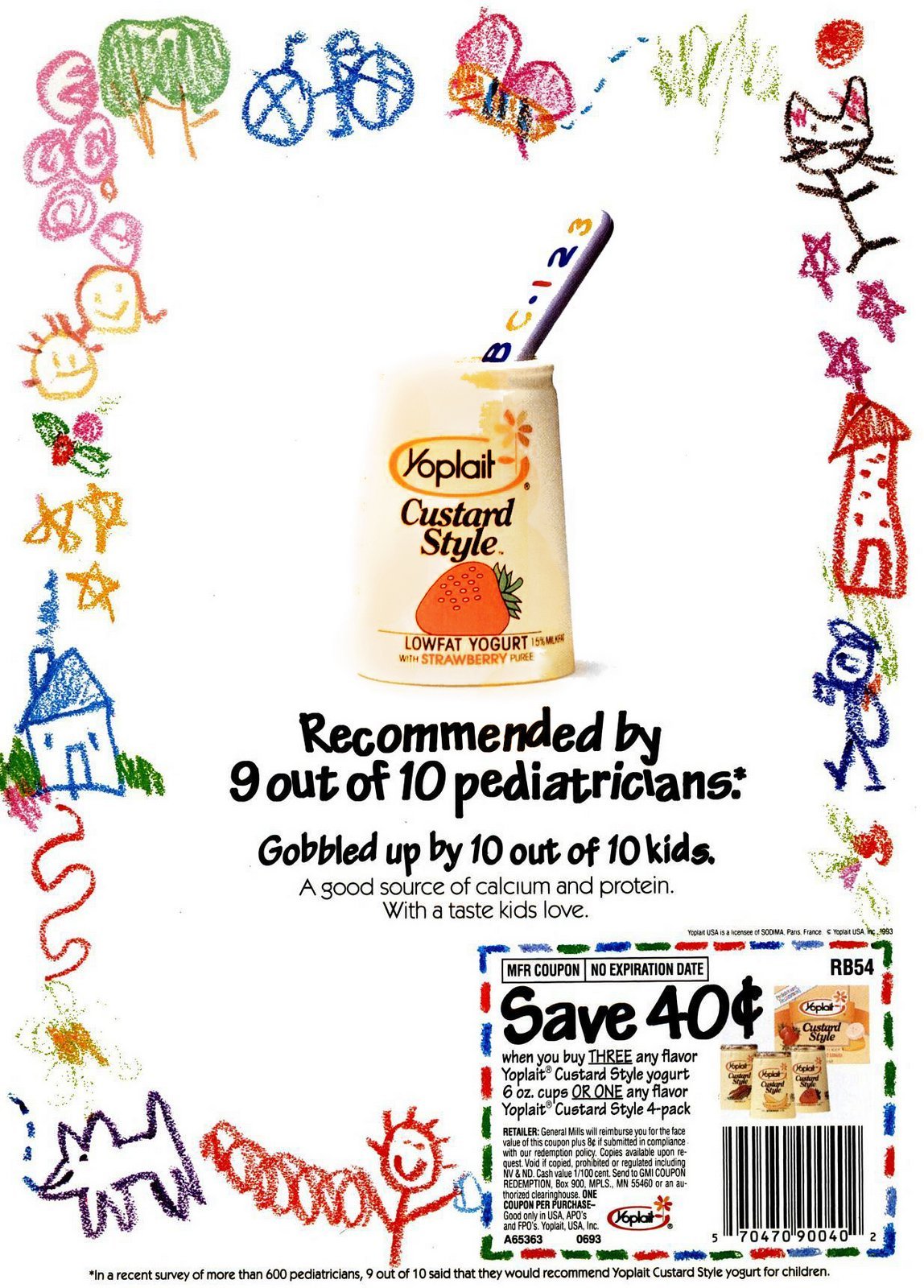 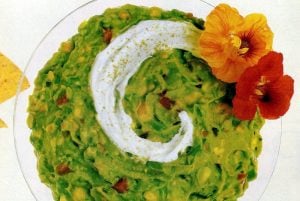 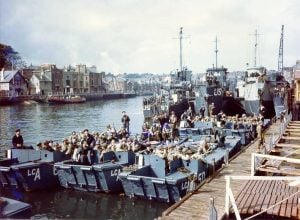