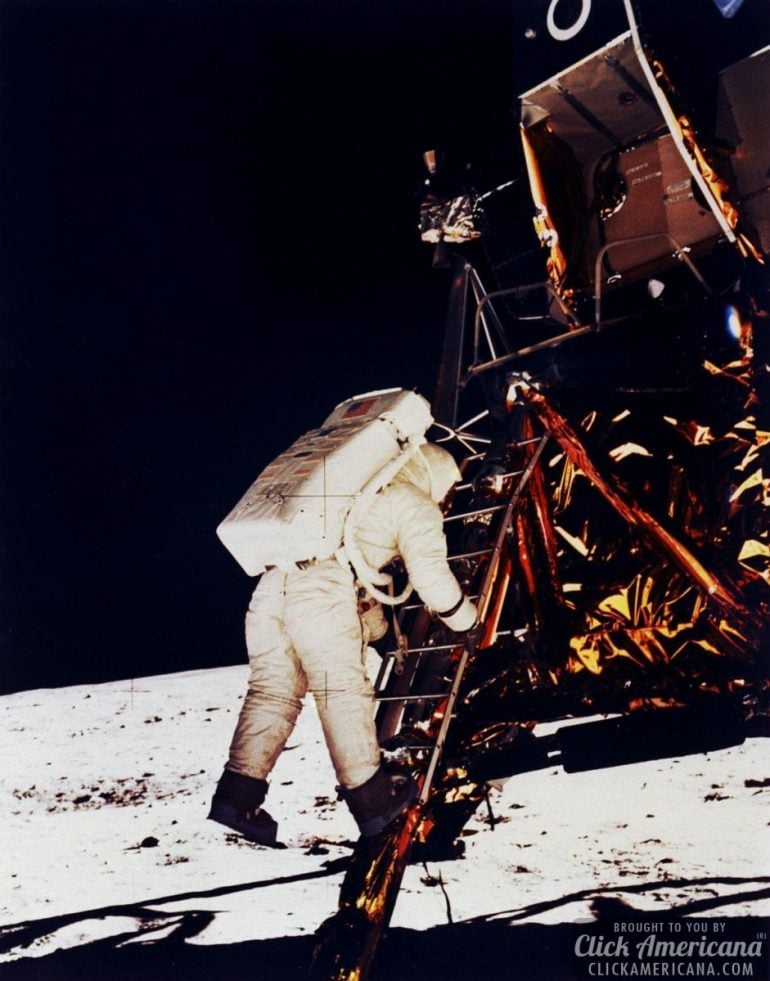 When it comes time to set Eagle down in the [Moon’s] Sea of Tranquility, Neil Armstrong improvises, manually piloting the ship past an area littered with boulders. During the final seconds of descent, Eagle’s computer is sounding alarms.

It turns out to be a simple case of the computer trying to do too many things at once, but as Aldrin will later point out, “unfortunately it came up when we did not want to be trying to solve these particular problems.”

When the lunar module lands at 4:18 p.m EDT, only 30 seconds of fuel remain. Armstrong radios “Houston, Tranquility Base here. The Eagle has landed.” Mission control erupts in celebration as the tension breaks, and a controller tells the crew, “You got a bunch of guys about to turn blue, we’re breathing again.”

Armstrong will later confirm that landing was his biggest concern, saying, “the unknowns were rampant,” and “there were just a thousand things to worry about.”

At 10:56pm, EDT Neil Armstrong is ready to plant the first human foot on another world. With more than half a billion people watching on television, he climbs down the ladder and proclaims: “That’s one small step for a man, one giant leap for mankind.”

Aldrin joins him shortly, and offers a simple but powerful description of the lunar surface: “magnificent desolation.” They explore the surface for two and a half hours, collecting samples and taking photographs.

They leave behind an American flag, a patch honoring the fallen Apollo 1 crew, and a plaque on one of Eagle’s legs. It reads, “Here men from the planet Earth first set foot upon the moon. July 1969 A.D. We came in peace for all mankind.”

More of the moon landing transcript from NASA

109:22:59 Armstrong: Okay. I just checked getting back up to that first step, Buzz. It’s… The strut isn’t collapsed too far, but it’s adequate to get back up.

[The ladder is mounted on the west strut and is, therefore, in the LM’s shadow. The recorded image is fairly dark. Journal Contributor Markus Mehring notes that, as a result of the information from Bruce, Buzz changes settings on the DAC and the recorded scene brightens, “just in time to catch Neil and his historic step off the footpad.”]

109:23:38 Armstrong: I’m at the foot of the ladder. The LM footpads are only depressed in the surface about 1 or 2 inches, although the surface appears to be very, very fine grained, as you get close to it. It’s almost like a powder. (The) ground mass is very fine. (Pause)

[Neil has his right hand on the ladder and will step down with his left foot, leaving his right foot on the footpad.]

[After examining the soil disturbance around his left boot, Neil moves his right hand lower on the ladder and steps down with his right foot.]

109:24:48 Armstrong: Yes, the surface is fine and powdery. I can kick it up loosely with my toe. It does adhere in fine layers, like powdered charcoal, to the sole and sides of my boots. I only go in a small fraction of an inch, maybe an eighth of an inch, but I can see the footprints of my boots and the treads in the fine, sandy particles.

109:26:16 Armstrong: Okay. The descent engine did not leave a crater of any size. It has about 1 foot clearance on the ground. We’re essentially on a very level place here. I can see some evidence of rays emanating from the descent engine, but a very insignificant amount. (Pause)

109:27:13 Armstrong: Okay. It’s quite dark here in the shadow and a little hard for me to see that I have good footing. I’ll work my way over into the sunlight here without looking directly into the Sun.

109:28:17 Armstrong: Looking up at the LM…I’m standing directly in the shadow now, looking up at Buzz in the window. And I can see everything quite clearly. The light is sufficiently bright, backlighted into the front of the LM, that everything is very clearly visible. (Long Pause) 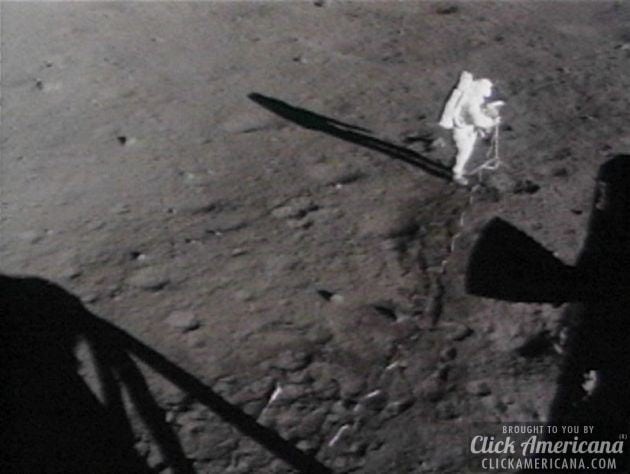 109:30:23 Armstrong: The (Hasselblad) camera is installed on the RCU bracket. (Pause) And I’m storing the LEC on the secondary strut. (Long Pause)

109:31:05 McCandless: Roger. Neil, we’re reading you loud and clear. We see you getting some pictures and the contingency sample.

109:32:19 McCandless: Neil, this is Houston. Did you copy about the contingency sample? Over.

109:33:25 Aldrin: (Commenting for Houston’s benefit) Okay. Going to get the contingency sample there, Neil?

109:33:30 Aldrin: Okay. That’s good. (Long Pause) (Providing some commentary as he watches Neil out the window) Okay. The contingency sample is down (that is, Neil has the sampler assembled) and it’s (garbled).

109:34:09 Aldrin: Looks like it’s a little difficult to dig through the initial crust…

109:34:12 Armstrong: This is very interesting. It’s a very soft surface, but here and there where I plug with the contingency sample collector, I run into a very hard surface. But it appears to be a very cohesive material of the same sort. I’ll try to get a rock in here. Just a couple. (Pause)

[Because the Moon has no atmosphere, the surface is continually bombarded by large and small meteorites – mostly small. Each impact digs a crater and sprays ejecta around the immediate area. The net effect is that the very top layer of the soil is very soft. However, each of the impacts shakes the subsurface layers in the area around the crater, and that shaking tends to settle the subsurface layer and make it denser. Indeed, as Buzz will discover when he tries to drive a couple of core tubes into the surface at the end of the EVA, below about 4 inches, the soil is very densely packed, rather like beach sand becomes after a wave has withdrawn.][Neil collected a total contingency sample of 1015.29 grams, including four rocks, each weighing more than 50 grams (terrestrial).]

109:34:56 Armstrong: It has a stark beauty all its own. It’s like much of the high desert of the United States. It’s different, but it’s very pretty out here. 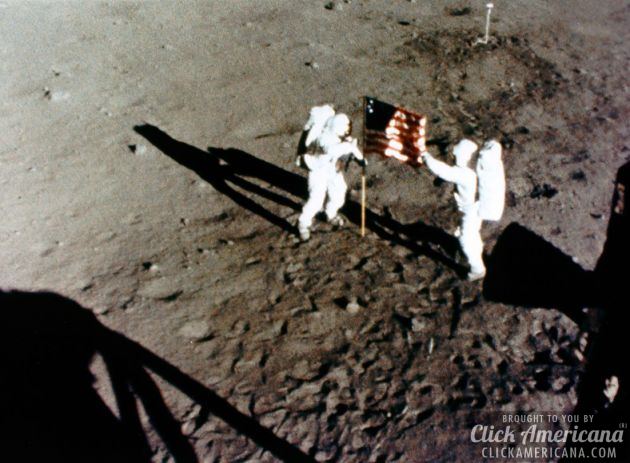 Moon landing video: “That’s one small step for a man, one giant leap for mankind.” 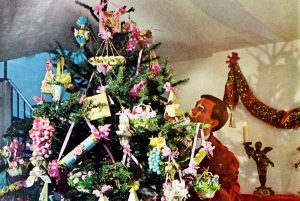 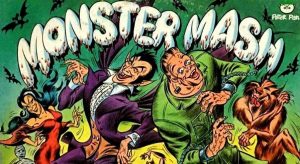 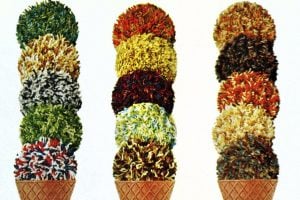