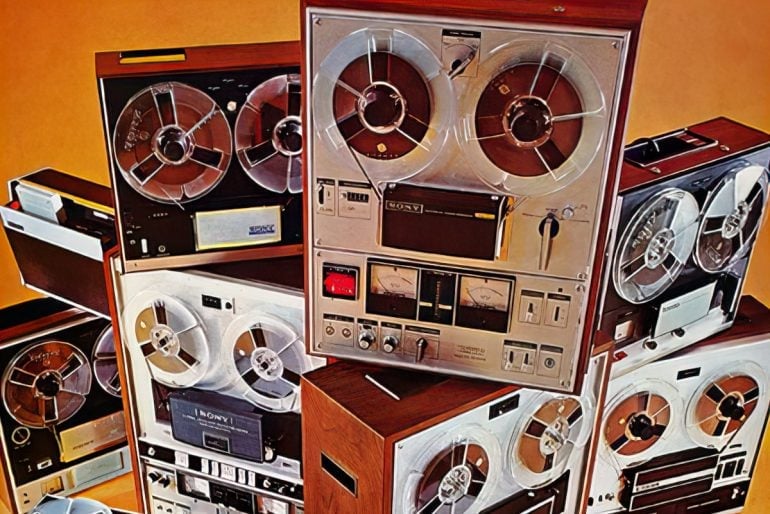 Reel-to-reel tape recorders hit the commercial market in the 1940s — and their evolution was boosted by the financial support of none other than Bing Crosby, who saw great potential in the technology.

Here’s a look back at how the industry really got going, plus see some of the top vintage reel-to-reel tape recorders available from the ’50s through the ’70s. 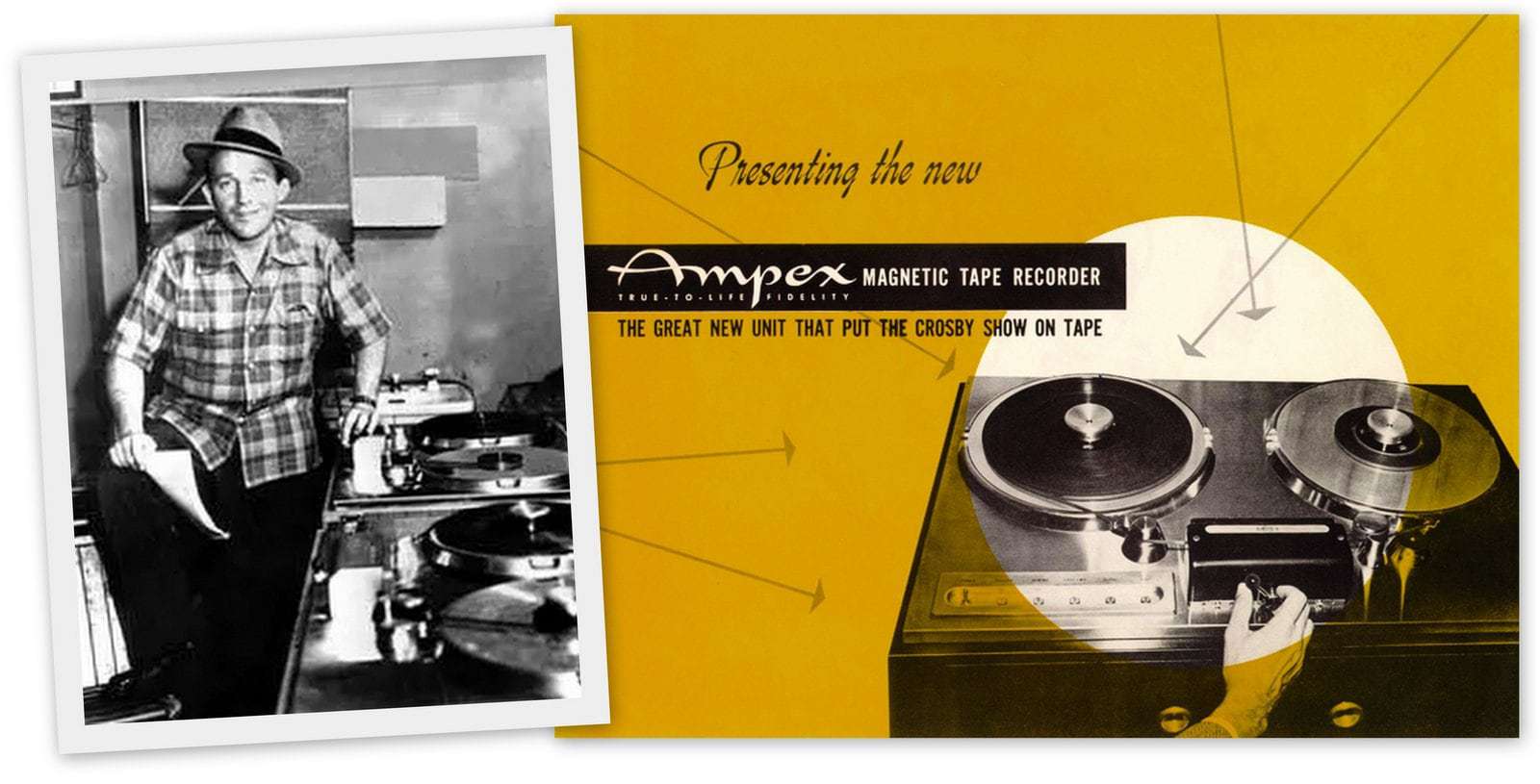 The tape recorder resisted practical application until the development of electronic circuitry in the 1930s.

These early devices, called Magnetopohons, were used by the German government for wartime propaganda broadcasts.

Just after [WWII], several Magnetophons were brought to the United States by returning military personnel and exhibited to gatherings of engineers. At such a meeting in 1946, Alexander Poniatoff saw the Magnetophon for the first time.

While others in the industry scoffed at this relatively primitive magnetic recorder as an impractical novelty, Poniatoff saw in it a potential product worthy of his technical team. Ampex set about improving the concept exemplified by the Magnetophon, and in 1947, produced a recorder which demonstrated the practicality of magnetic recording.

The Ampex Model 200 was the first professional-quality magnetic recorder to be offered commercially. It was immediately adopted by the radio broadcasting industry as a basic tool for producton and time-delay of network broadcasts in 1948 and by the music business for mastering high fidelity records. 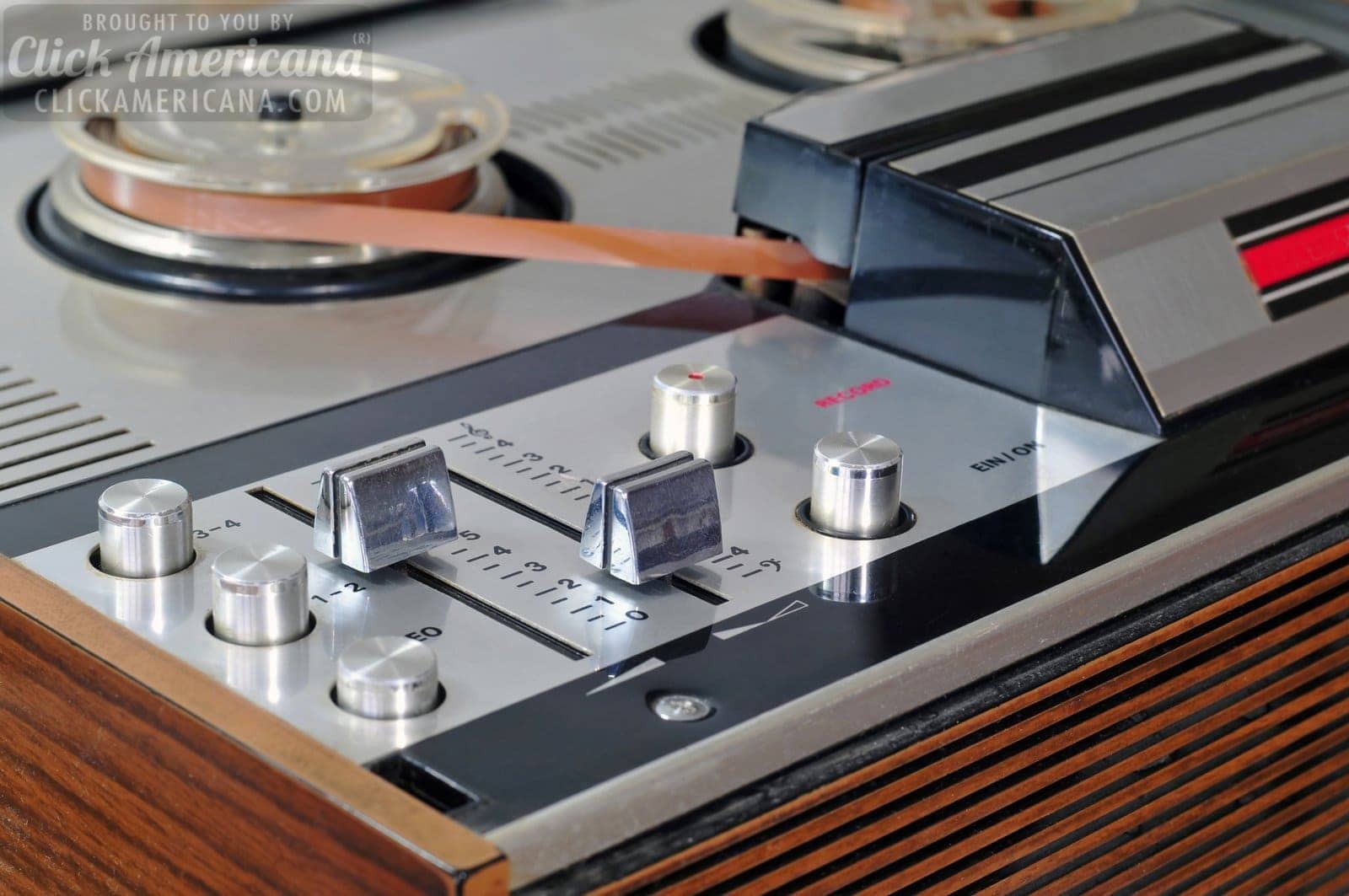 A key figure in launching the Model 200 was Bing Crosby. At the peak of his radio popularity in 1947, Bing wished to record his weekly network shows, which the pressure of live broadcasting inhibited.

He turned first to electrical transcriptions, but the sound quality was noticeably impaired by this process, and the problems of editing and producing the show using discs were formidable.

Hearing of the magnetophon, Bing arranged to test it in the production of a show. The results were so encouraging that he sought to make tape recording his standard means of production.

This led him to Ampex, from which he purchased not only the first Model 200, but the first 20.

From this point, the Crosby show was taped at a relaxed pace, easily edited down to a half-hour format and broadcast with sound quality indistinguishable from a live program.

In the years since the historic Model 200 appeared, magnetic recording has taken its place alongside the printed page as a basic means by which man captures, stores, organizes and retrieves information about himself and his environment,

For those under 30, a world without magnetic recording is difficult to visualize, so basic has it become in modern life.

Descendants of the Model 200 play vital roles in man’s exploration of space, in data processing and record keeping, in research, education, communications and the enjoyment of our leisure time.

In 1969, total sales of magnetic recording equipment and tape and other recording media throughout the non-communist world will be well over $3,000,000,000, according to William E. Roberts, Ampex president and chief executive officer.

Let the magnificent Wollensak Stereophonic bathe you in sound, rich, and full-bodied as only stereo tape can bring it to you. Listen to the sound of the world’s greatest voices, triumphal orchestras captured precisely by the exclusive Wollensak “Balanced-Tone.” 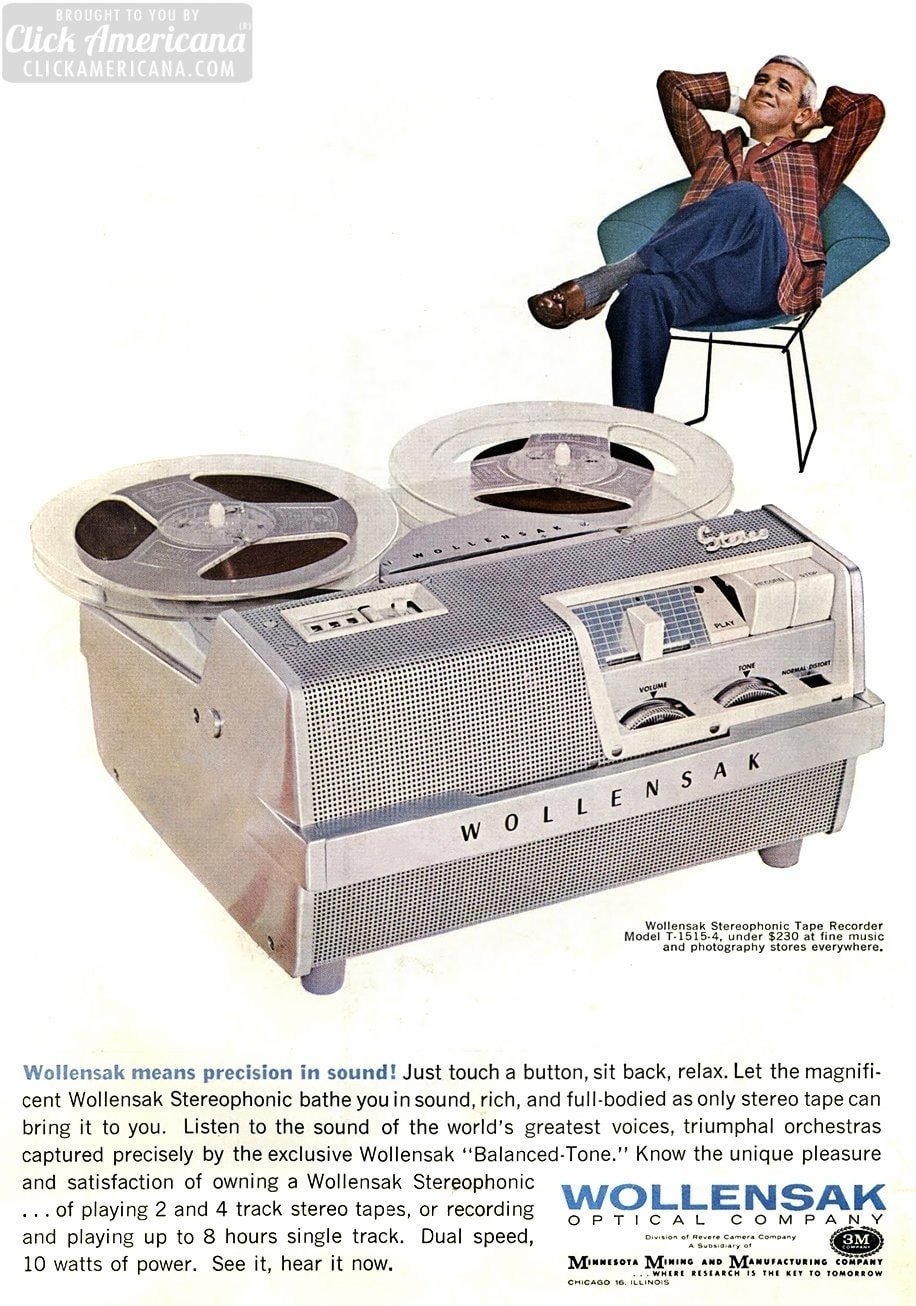 “Frankly, I bought it just for office use. But soon I was taking it home — to parties — everywhere. Push-buttons make it a cinch to operate. And thanks to “Golden Throat” tone, the playbacks really sound professional.

You also get two speeds: one is best for voice-one for music. But don’t take my word. Today, ask your RCA Victor dealer to show you the Congressional (model 7TR2) in tan simulated leather. If you prefer Hi-Fi, there are 2 beautiful models from $199.95.

It’s a new idea. It’s a portable tape recorder designed by General Electric for the whole family to use.

Use it to record baby’s first words. Birthday and party time fun. Dad can test out a speech. record a lecture. Teenagers can tape jazz. Mother can tape a voice-letter to send to her son in the Service.

It’s easy to operate. Just press the button to record, rewind, play back or stop. It’s rugged. Plays back words and music with a clear, true sound on 1/2-hour reels.

(General Electric is first to design Ultra-Balance into an inexpensive tape recorder. This engineering breakthrough installs a precision-balanced flywheel into the recorder’s capstan drive to give you the constant tape speed so important for faithful fidelity.)

The price is family-budget size. under $40. See it at your dealer’s. Try it. If you have a family camera. you should also have a new General Electric Family Tape Recorder.

MORE: V is for Victrola record players: The history of the famous gramophones that entertained millions 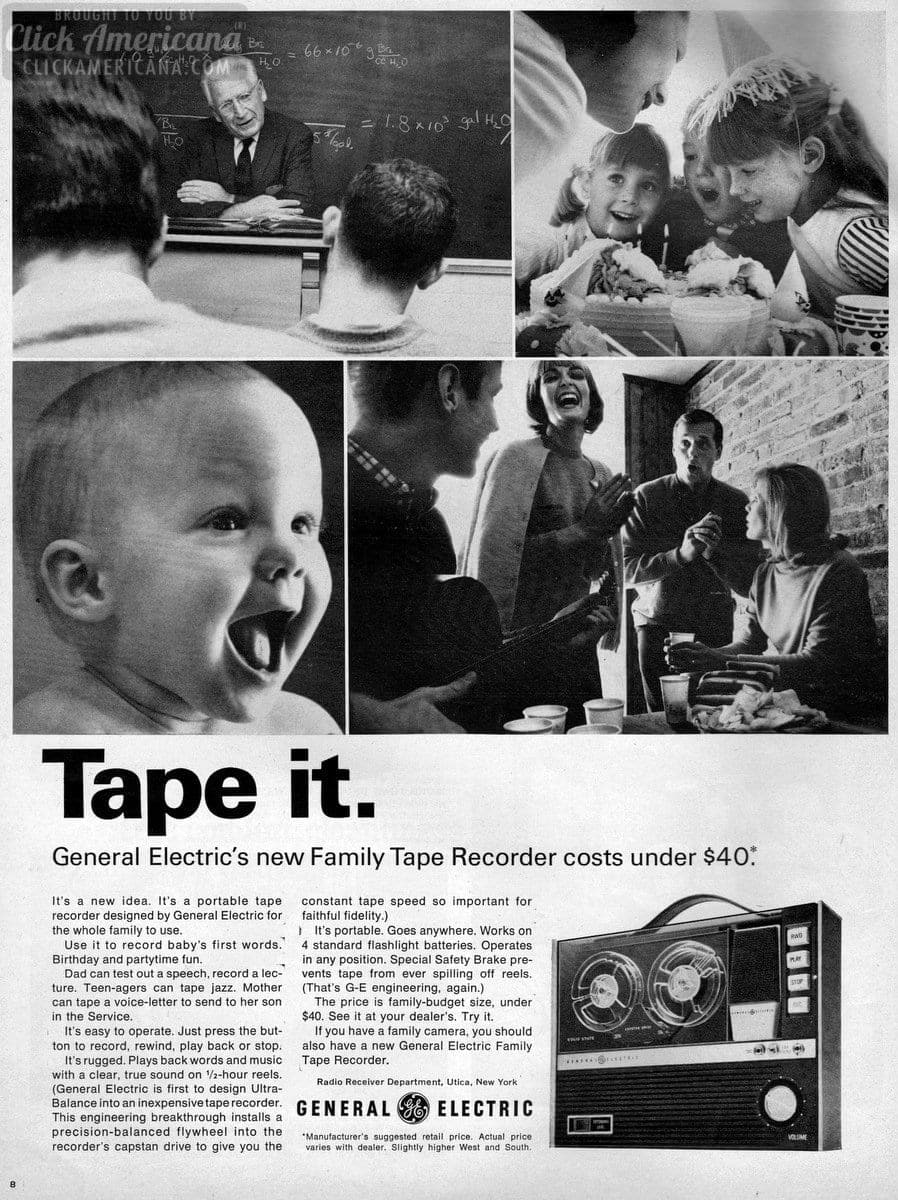 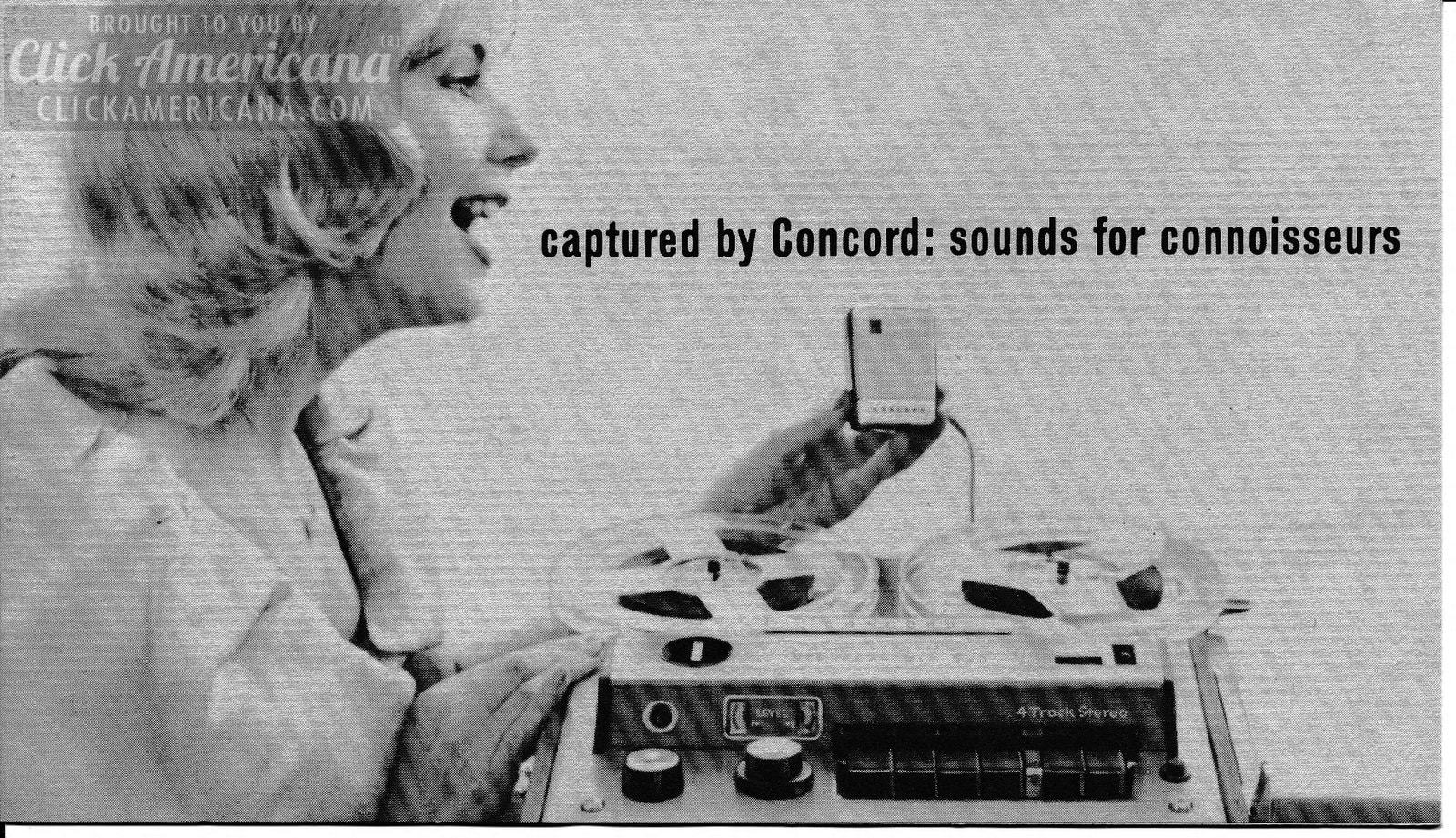 More style, more features than any other recorder in its price class. The construction is typically Wollensak: rugged, reliable, absolutely top quality in both design and materials.

Never before has a budget priced tape recorder contained such a luxurious array of features, plus the superb new Control Central that contains a sound studio of highly versatile advantages in a hand span. Price: $149.95*

No matter how elaborate your home stereo sound system is, it’s incomplete without a tape deck. And Sony/Superscope brings you the most complete line of stereo tape decks in the world.

Decks that fit all pocketbooks. that suit particular systems. that meet specific needs. And every Sony/Superscope deck — regardless of price — is the finest money can buy.

Each instrument is flawlessly crafted. with rigorous testing at every step of construction. Then each instrument undergoes a complete series of quality-assurance tests — performed by skilled technicians at one of the most modern and sophisticated tape-recorder test facilities in the world.

So you may be sure that the Sony/Superscope product you purchase will give you years of trouble-free service.

The Sony/Superscope deck that’s exactly right for you is at your dealer’s now. 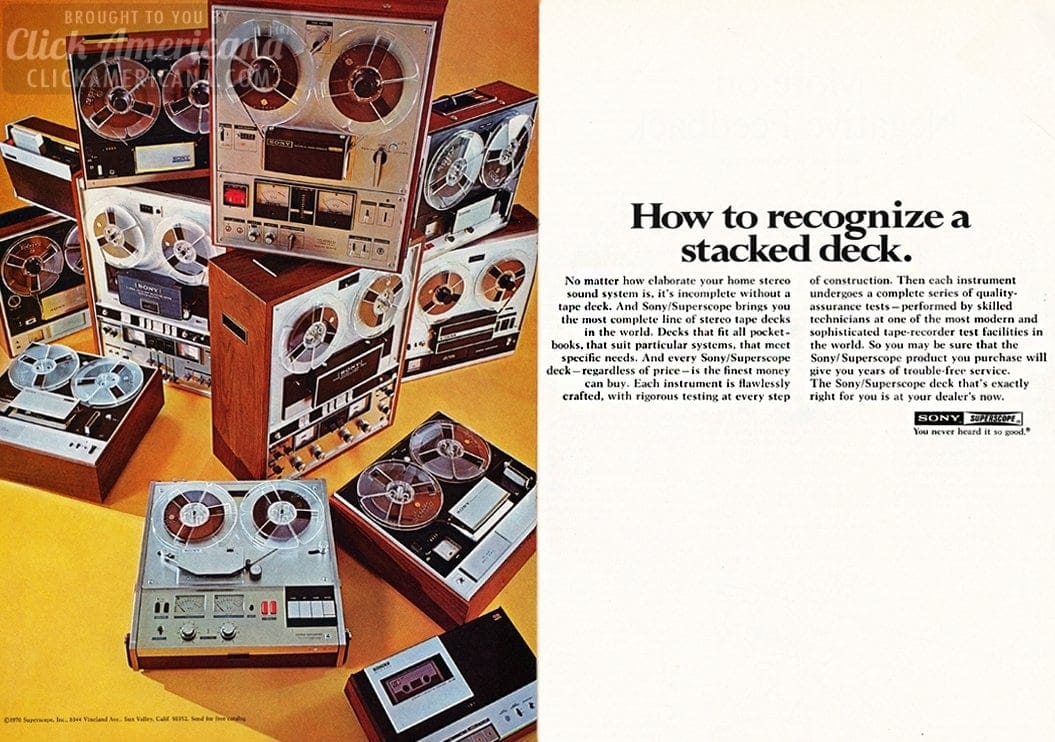 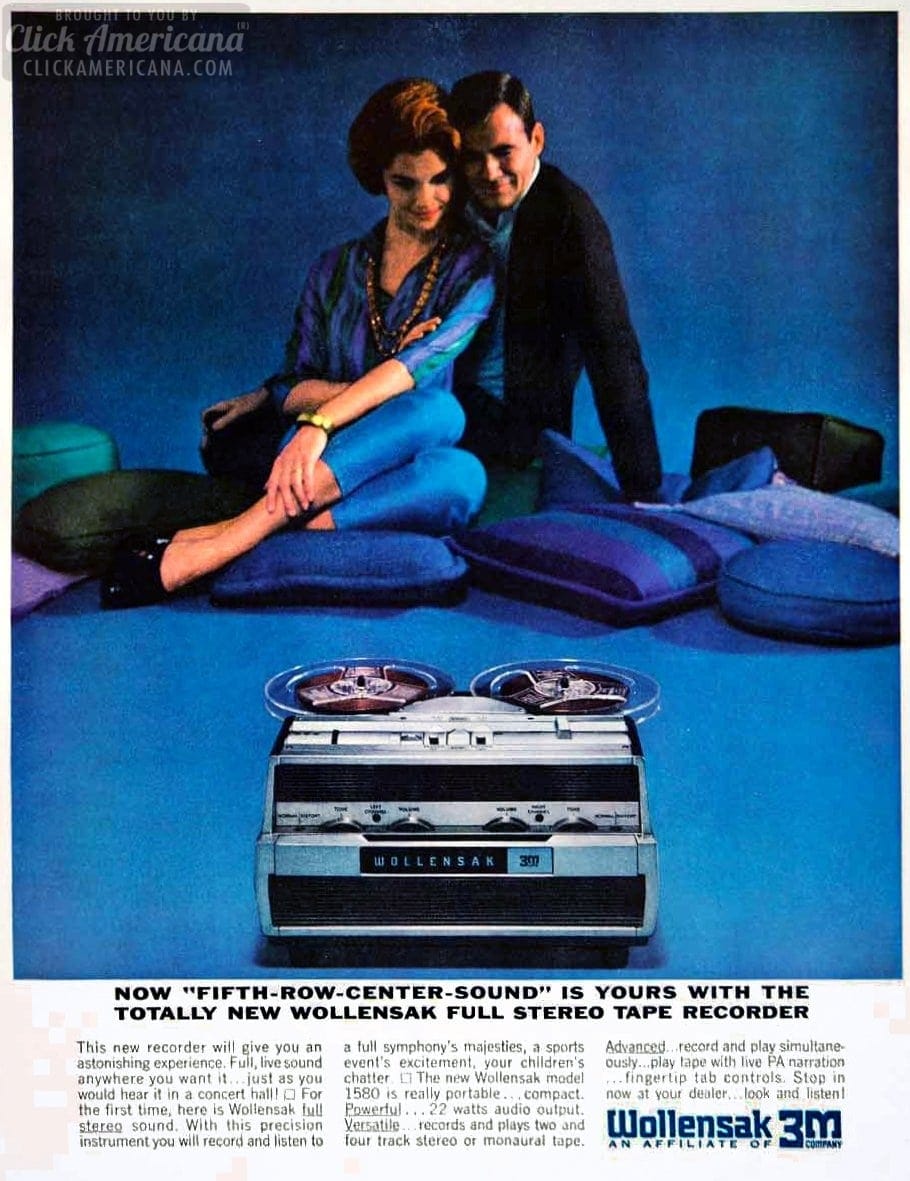 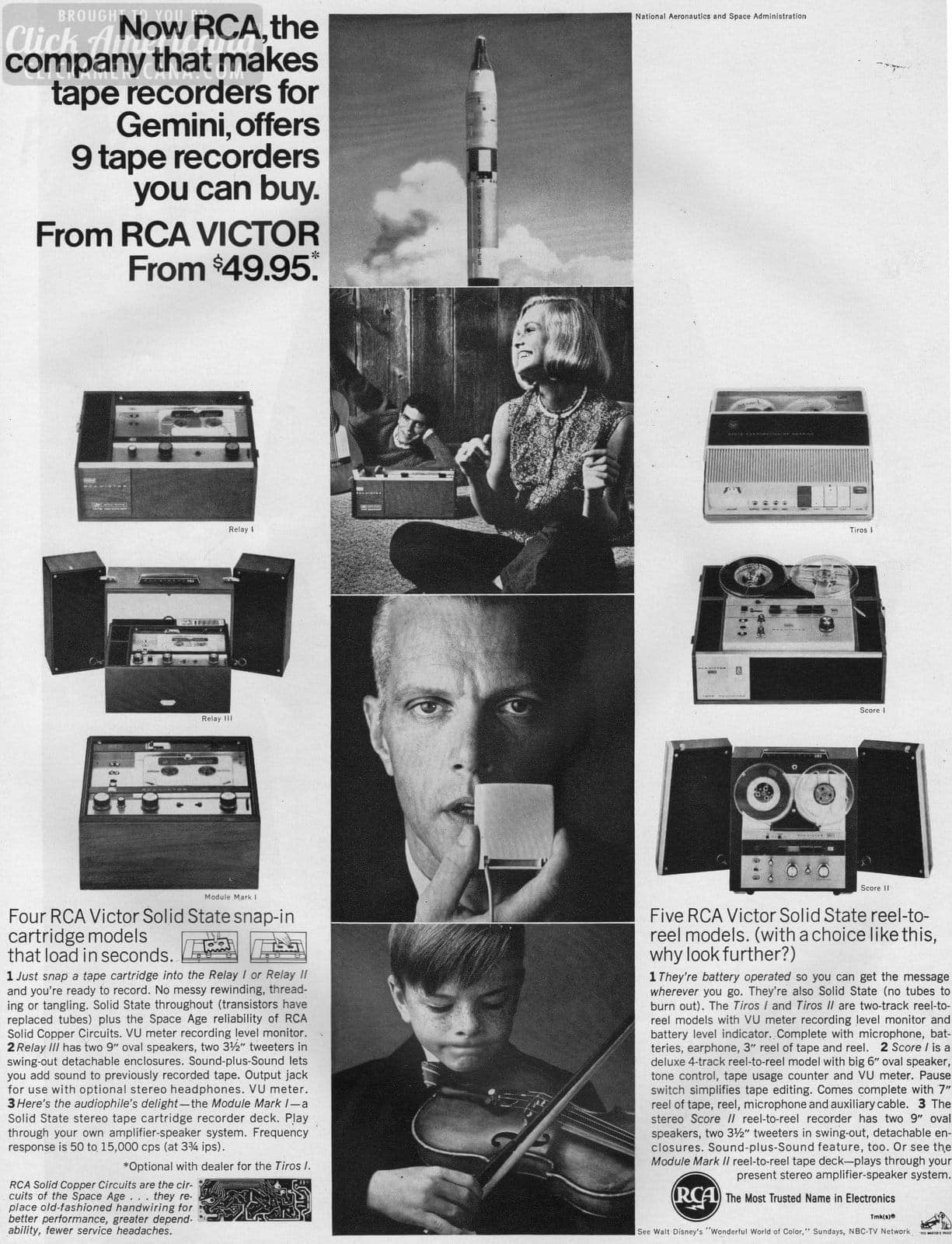 Wollensak 5750 Twin-Wing Stereo Tape Recorder. Speakers swing out for play, fold when not in use. Easily detachable for strategic placement on wall, or table, in bookcase. Vertical or horizontal operation. Attractively woven speaker facings. 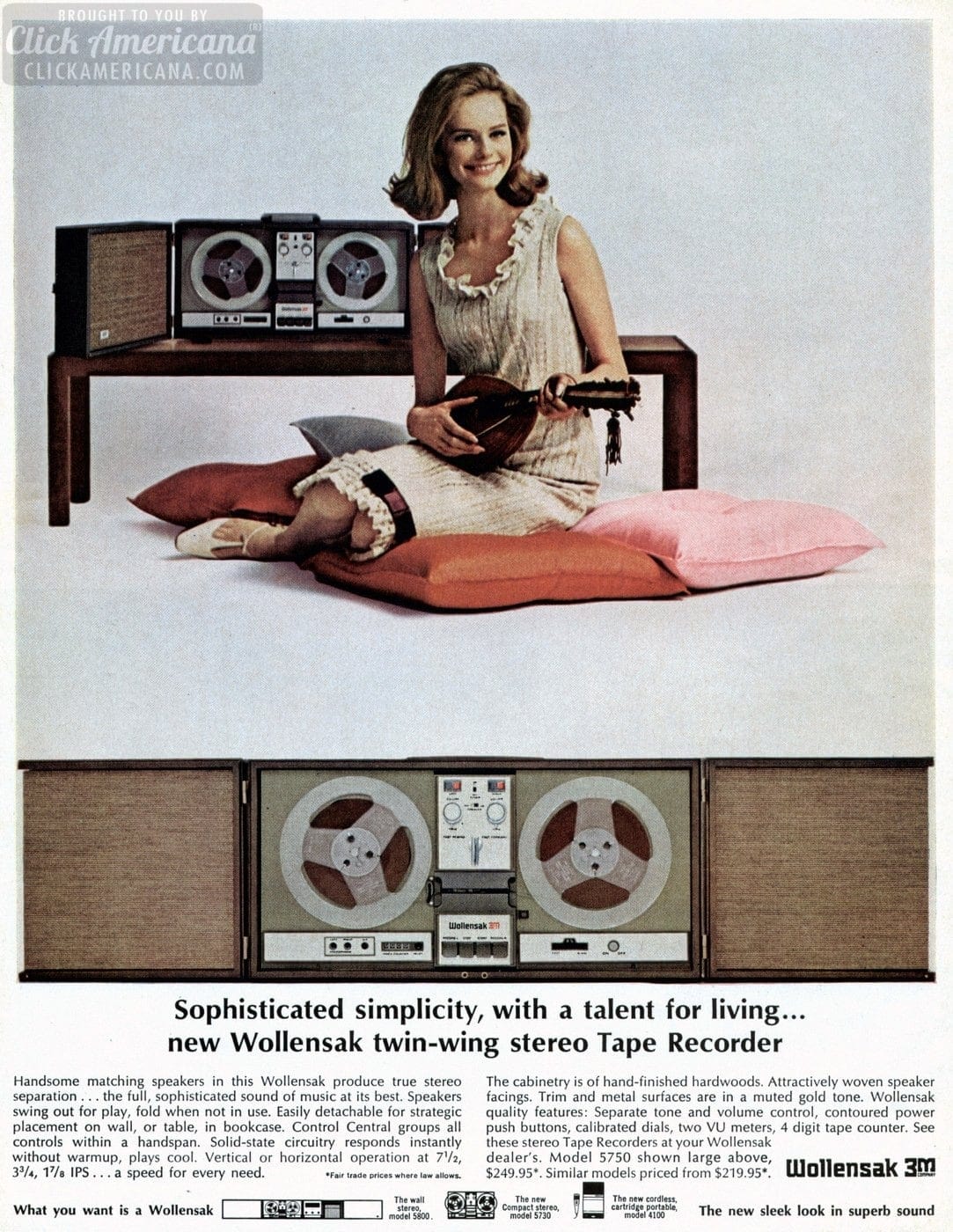 MORE: How to choose a turntable: Old-school tips for the best record players

Now, from World-famous Sony, the perfect playmate for your record player — the new Sony model 250A solid-state stereo tape recorder.

With a simple, instant connection to your record player, you add the amazing versatility of four-track stereo recording and playback to complete your home entertainment center.

Create your own tapes from AM, PM or FM Stereo receivers, or live from microphones-up to 6-1/4 hours of listening pleasure on one tape!

This beautiful instrument is handsomely mounted in a low-profile walnut cabinet, complete with built-in stereo recording amplifiers and playback pre-amps, dual V.U. meters, automatic sentinel switch and all the other superb features you can always expect with a Sony. All the best from Sony for less than $149.50.

NOW SEE THIS: Vintage portable radios from the ’50s to the ’80s