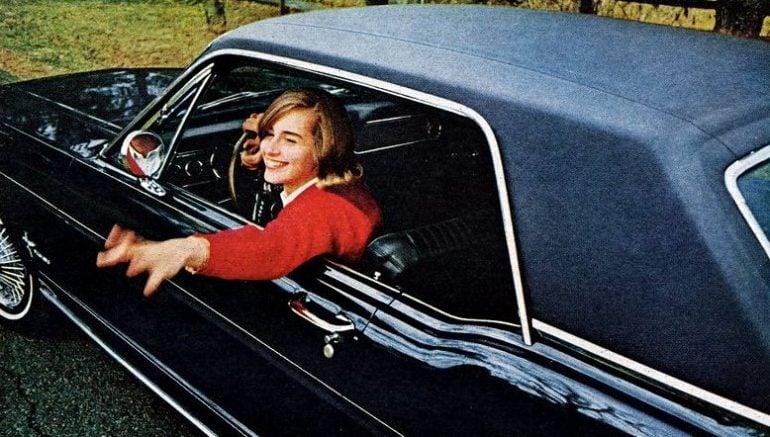 What really broke down Joan’s reserve was the solid practicality of Mustang’s deep breathing Six. She knew she could trust this husky, suave brute of an engine to squire her around town, drive her to the mountains for a weekend, even drop her off for dinner with the girls (who will never guess how little Mustang costs her to own and run).

Extraordinarily considerate of a girl’s feelings… and her pocketbook.

Take a test drive and see if you should give in to Mustang because of sheer Six appeal. Smart girls do. 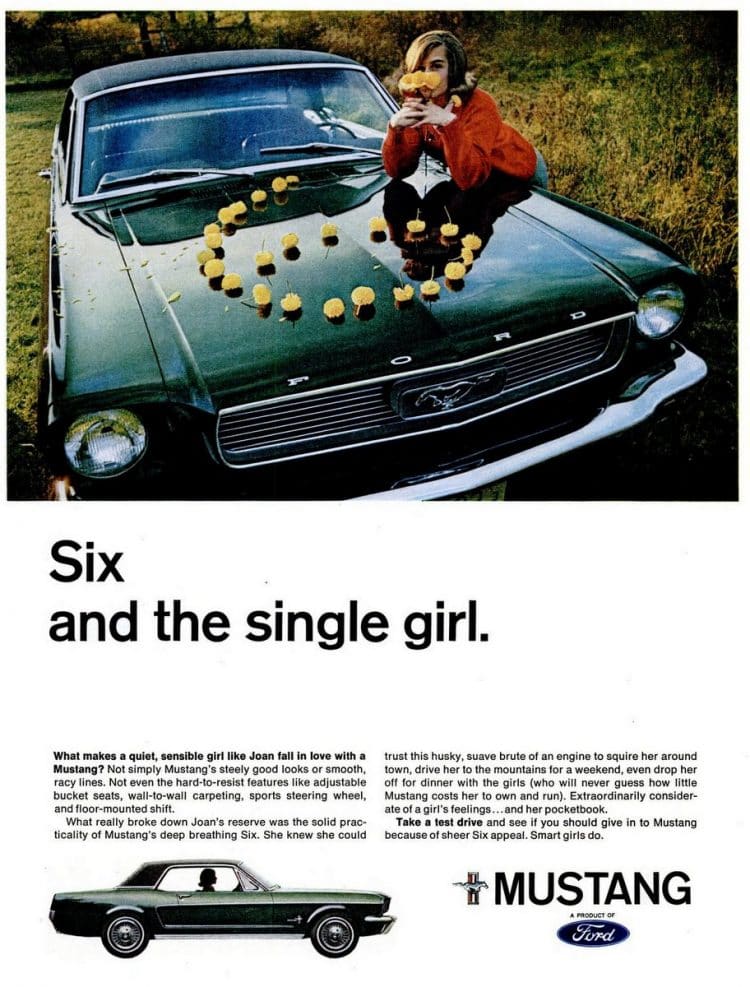 The ’66 Ford Mustang: Sweetheart of the supermarket set

Mustang is a sweetheart no matter how you look at it. Aesthetically. Economically. Its good looks are standard equipment. As are bucket seats, all-vinyl interiors, full carpeting.

And economy is a Mustang specialty… particularly when it comes with six-cylinder emphasis.

Your Mustang with its “getaway” six races to the market, drops off the kids, picks up the man in your life… all in one gas-saving breath.

Step out of this one in the parking lot and the whole supermarket recognizes you as a girl who’s as smart as she is pretty. As a matter of fact, you are! You’ve earned your “A” in Home Economics.

ALSO SEE: Look back at the 1973 Ford Mustangs 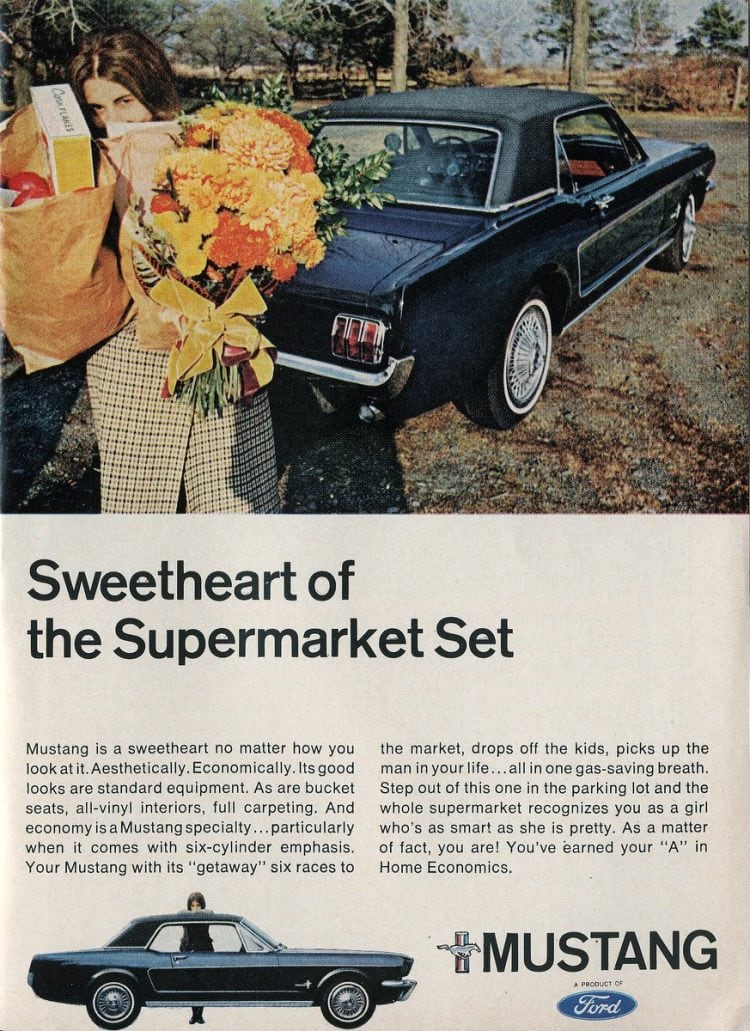 So you chose a Six for your Mustang! Congratulations.

You’re behind the wheel of one of the snappiest, brightest, best-looking, common sense cars in the world today: Mustang with its big, hot 200 cubic-inch Six.

This Mustang makes gas economy standard… is real bright about adjusting its own brakes… is dead right about not making unnecessary trips for routine maintenance (just about every 6000 miles or 6 months is enough). And it maneuvers easily into tight parking spots.

Nobody will deny you’re driving one of the most dashing cars around. With no-cost trappings like bucket seats. Floor-mounted, fully synchronized, 3-speed shift. Vinyl trim. Door-to-door car carpeting.

That’s your basic Mustang … dash plus savvy. You can add many, many more options for extra dash. Say, that’s you, isn’t it? Aren’t you glad you took the time for a test drive at your Ford Dealer’s! 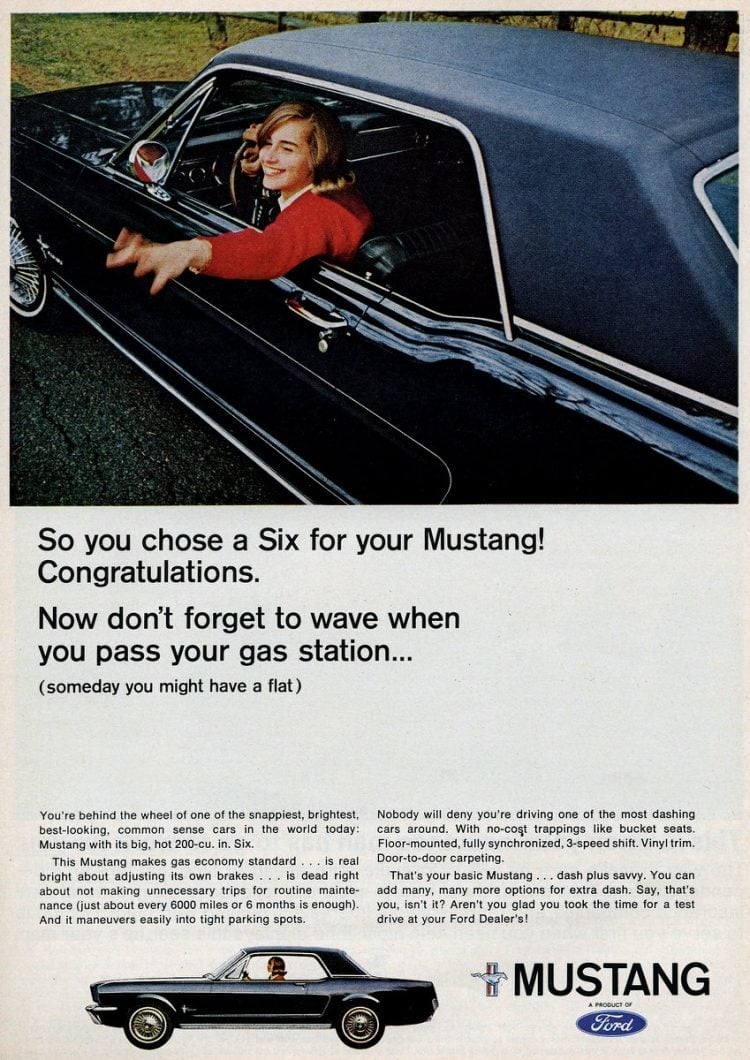 MORE: The 1965 Ford Mustang will transform you! 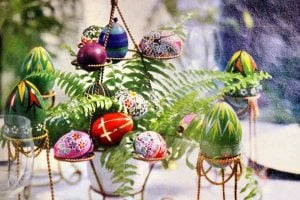