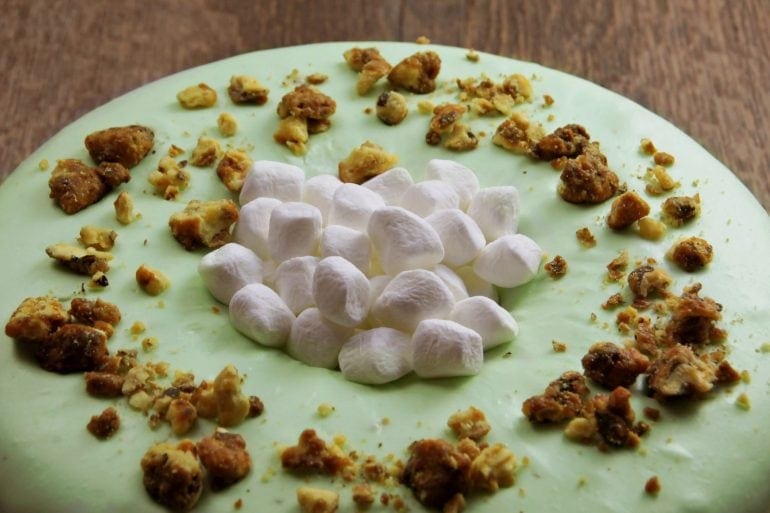 For reasons unknown, one word that was big in the news at the time — Nixon’s Watergate scandal — somehow got attached to this pistachio pudding cake. (There were suggestions, of course, that an im-peach flavor would have made more sense.)

While Watergate might have actually had nothing to do with the green wonder, the notorious name certainly piqued the curiosity of many people… and, judging by its popularity in the seventies, apparently also tickled a lot of tastebuds.

In the name of historical research, I decided to give this retro recipe try! I used a fluted pan for the cake itself, and decided to frost it with a pistachio pudding buttercream icing rather than the faux whipped cream-based frosting several people recommended 40-plus years ago.

So what did the family think of it? They were happy to eat it, but we all found the flavor to be… unremarkable. (For all anyone could tell, it was made from regular cake mix with the addition of few drops of green food coloring and several drops of almond extract.)

Okay, so while it didn’t blow our minds, but was still a fun experiment, and the whole thing was gone less than 48 hours later. Fortunately, I was able to get a few photos before then, and you can see the pictures of how it looked below.

Also here for you is the text from several different newspaper articles published during the ’70s. They will tell you a bit more about the excitement surrounding this cake, and you’ll also get to see several recipe variations on the Watergate theme! 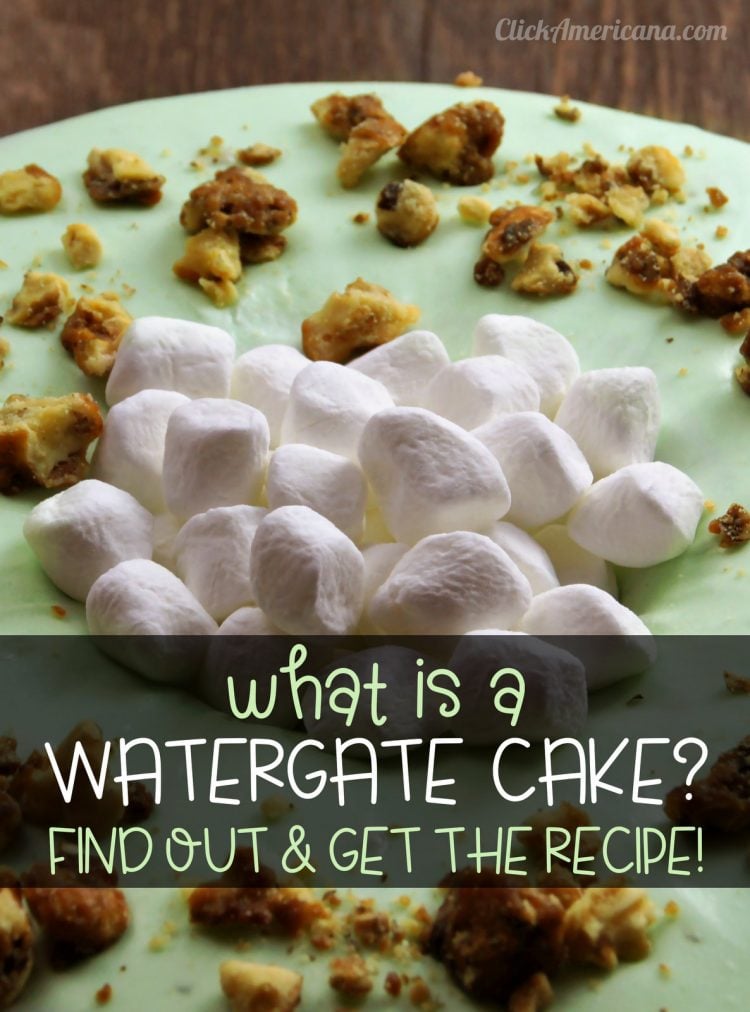 Before setting off on a new year of food and recipe ideas, we like to look over the past year’s recipes and repeat the ones that are reader favorites.

Sometimes it is hard to pick the favorites, but this year it was simple. Any time that more than 100 people will sit down and take the time to write out a recipe to help answer another reader’s request, that has to be a popular recipe. Such was the case last spring when Mrs Gary Warnecke of Kirkwood requested the recipe for Watergate cake.

This request set off a reaction that lasted for weeks, and provided various versions and stories. Basically, the recipes submitted fell into two camps: one calling just for the instant pistachio pudding mix, and the other adding chocolate. 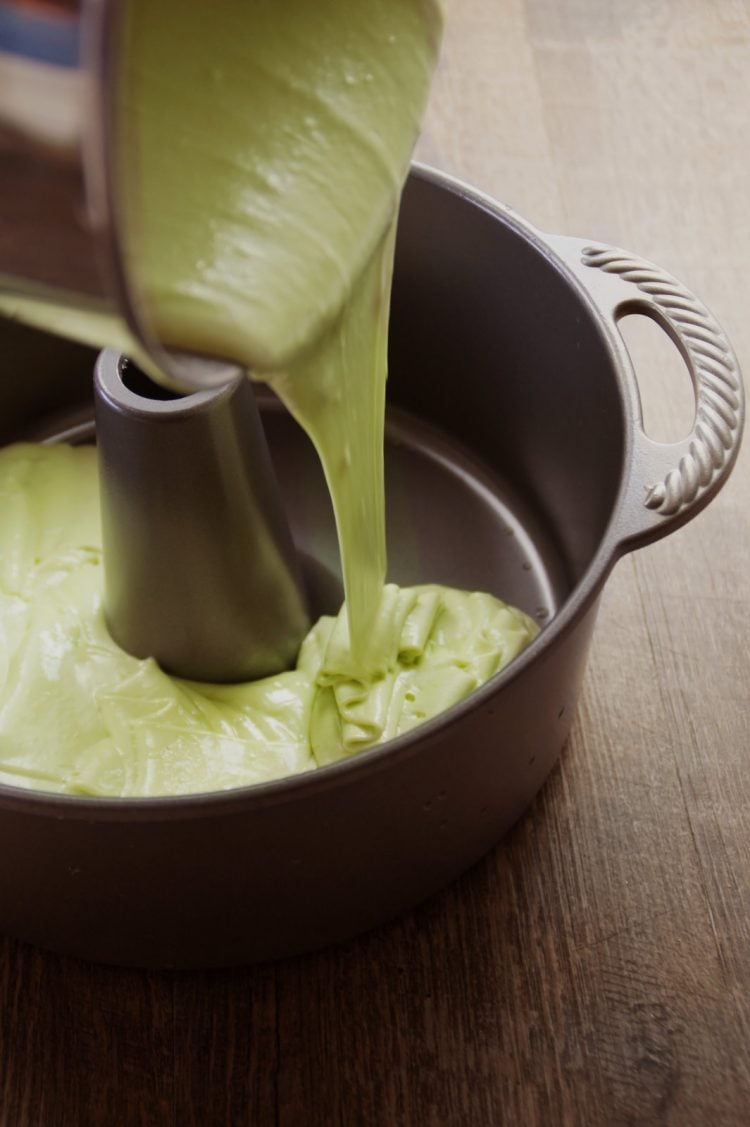 The one thing that all the recipes had in common was the inclusion of instant pistachio pudding mix, and several area grocers must have wondered what caused the sudden demand for this product. As for the name, every letter had a different story, but the most common one was that it was called Watergate cake because it had such a great cover-up (icing).

The Watergate cake with cover-up icing is a lovely green, and perfect for a St Patrick’s Day table. It is quite rich. For extra trim, you can add little green sprinkles, but do this only if you plan to serve it the same day, because they will melt and run into the icing by the second day (it still tastes good, but doesn’t look so pretty).

The chocolate Watergate Cake is a delicious, moist Bundt cake that is great to eat as is or with a dusting of powdered sugar. – St. Louis Post-Dispatch (St. Louis, Missouri) – January 5, 1977 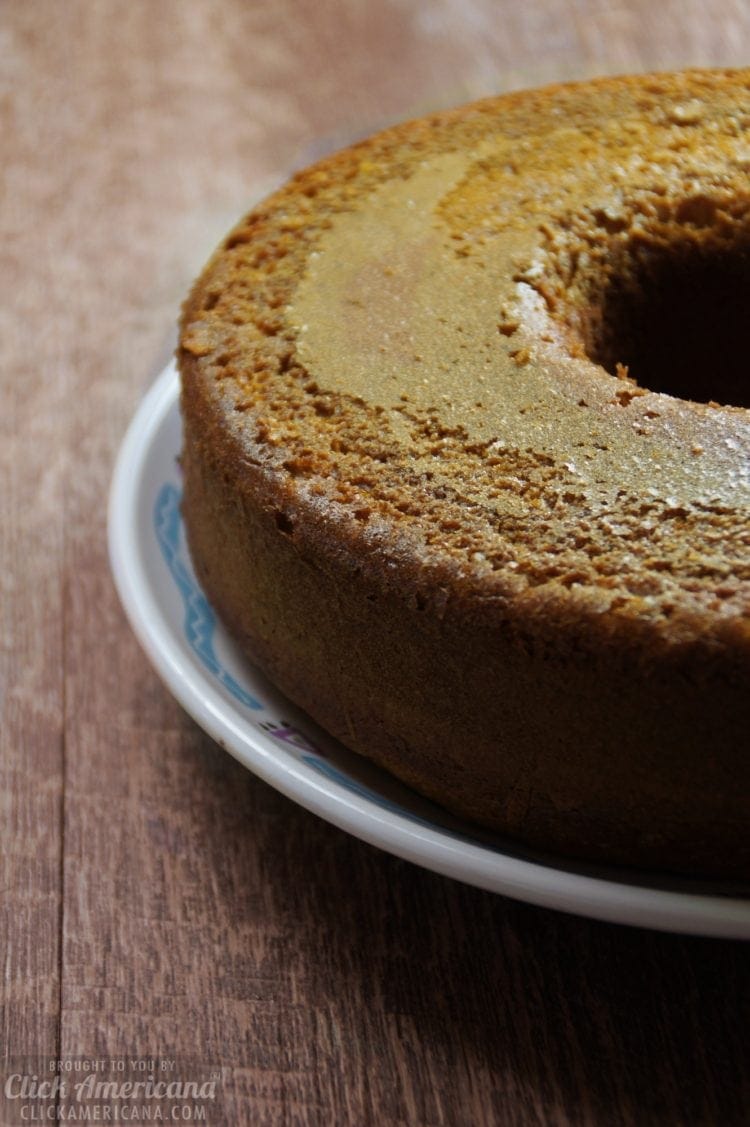 Mix together all ingredients and beat well. Pour batter into prepared cake pans (2 layer pans or one 13×9 inch pan.)

Bake at 350 degrees for 30-40 minutes. Remove from oven, cool and ice. Sprinkle with nuts and coconut if desired. 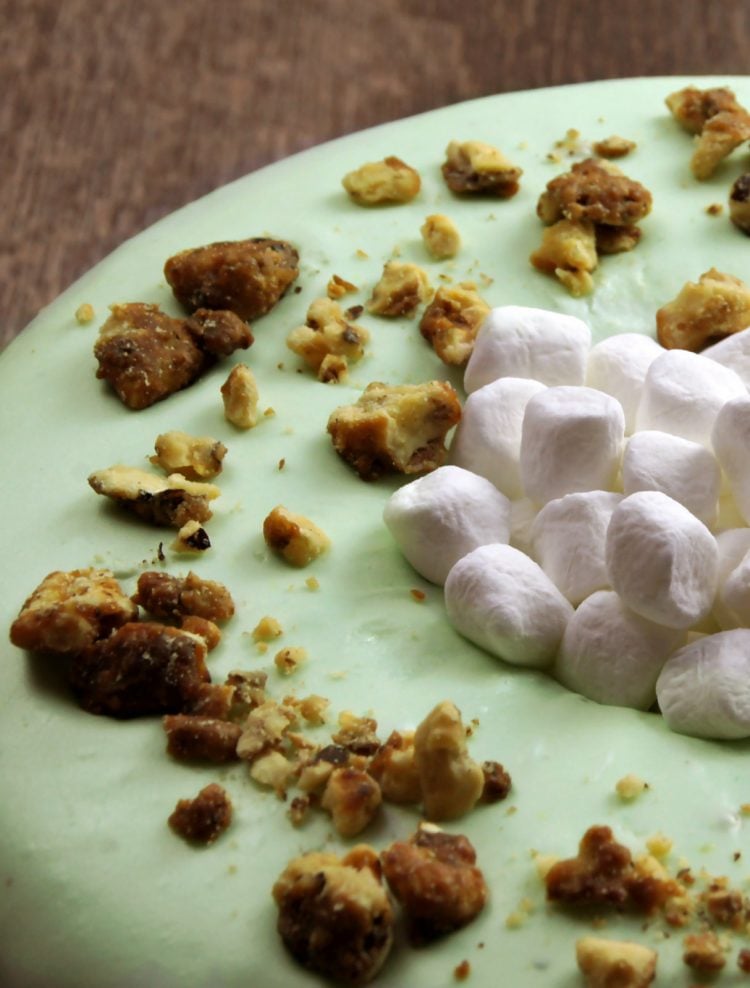 Beat first three ingredients together until thick. Spread on cake and cover with one or more of the last four ingredients. Keep frosted cake in the refrigerator.

Mix the milk and pudding mix together until the mix is dissolved. Add to butter and whip. Add vanilla, if desired. Slowly add in powdered sugar until fully blended and frosting is of a spreading consistency. (You may need more or less powdered sugar.) Sprinkle with chopped nuts of your choice, marshmallows and coconut (if desired). 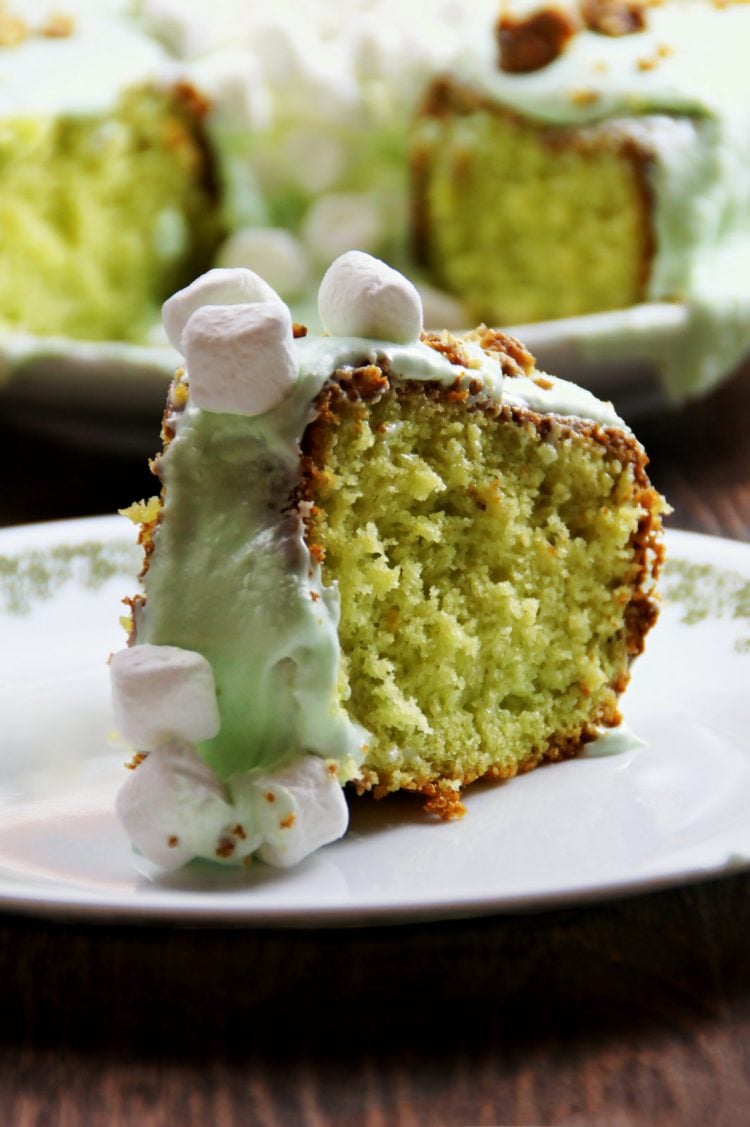 2. In a large mixing bowl, combine cake mix, pudding mix, water, orange juice and oil. Beat on medium speed of an electric mixer for 2 minutes or until mixture is smooth. Add eggs, one at a time, beating well after each addition.

3. Grease a 12-cup Bundt pan (or tube pan) generously with shortening. Dust with flour and shake out excess. Pour 275 of the batter into the pan. Mix remaining 1/3 batter with chocolate syrup. Pour evenly over batter in pan.

4. Bake for 50 minutes in preheated 350 degree oven or until cake springs back lightly when touched. Remove from oven and cool in the pan for 15 minutes prior to removal. This is delicious plain, or dusted with powdered sugar. Yield: 16 servings. – Pensacola News Journal (Pensacola, Florida) – December 16, 1976

The following is a different version of the cake recipe, and it has been known as Summer Coolness. – Mt. Vernon Register-News (Mt Vernon, Illinois) – November 4, 1975

Cream and then add 1 cup nuts. Press into a 9 by 13 baking dish and bake 20 minutes in a 350 degree oven. Do not let crust brown. Let cool, then top with the following mixture.

Mix and pour over the top of cheese and Cool Whip layer. Over this, spread the remainder of Cool Whip. Keep cake in refrigerator.

Note: This is also good with chocolate pudding.

ALSO SEE
Watergate is the hot address in Washington DC (1969) 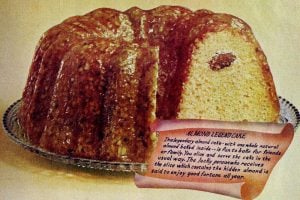 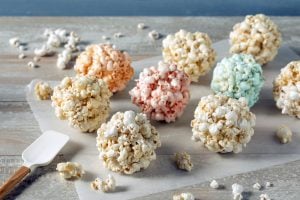 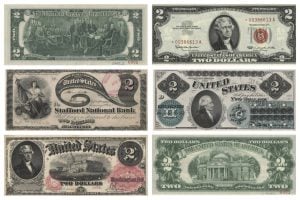 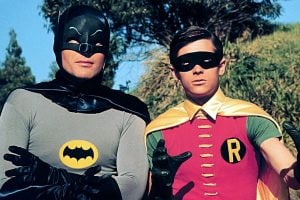 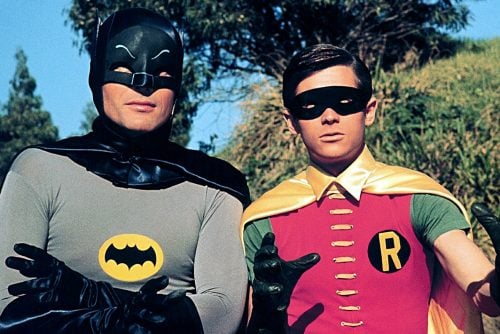