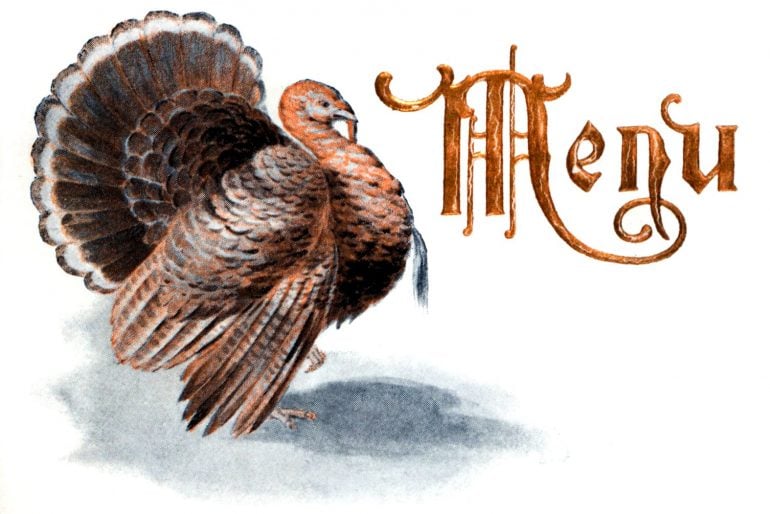 For a Colonial-style Thanksgiving, on the table should be old-fashioned pickles, bar-le-duc or currant jelly, gooseberry jam and tart preserves.

Philadelphia cream cheese should be served with the bar-le-duc jelly. Use cold plates under the hot ones on which the food is served. 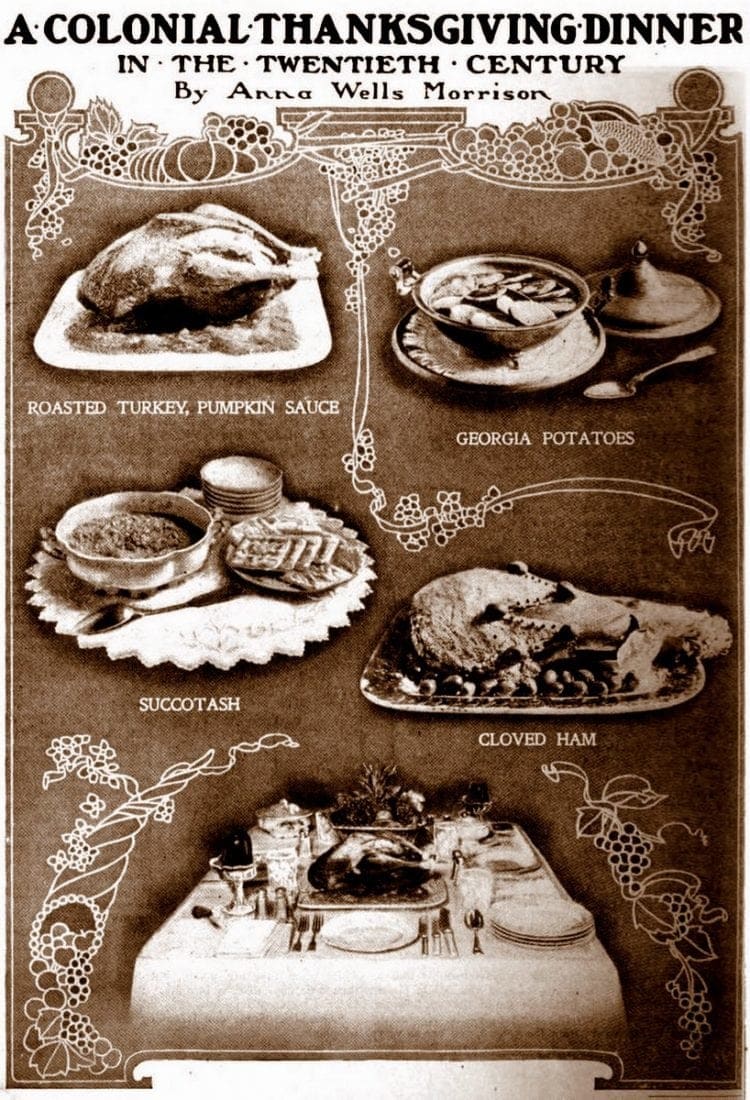 Mix a cupful each of finely chopped beef suet, sweet milk, molasses, seeded raisins and flour, two cupfuls of cornmeal, and a level teaspoonful of soda sifted with flour and meal: dip a cloth bag in hot water, dust inside with flour and pour the batter in, tie securely, leaving a quarter for the pudding to swell.

Plunge the pudding into a deep kettle full of boiling water; cover and boil constantly for three hours, refilling the kettle from the teakettle of boiling water as that in the pot evaporates. When done, remove and plunge into cold water; take out and drain immediately; cut open the bag and place the pudding on a hot dish; serve with the following sauce.

For a ten-pound fowl, use the inside crumb of a large loaf of stale bread; crumble and toss in butter in a frying pan until brown; remove to a bowl and add one large onion, one head of celery minced very fine, six milk crackers soaked in hot water until soft, four whole eggs, one teaspoonful of sage, and salt and pepper to suit; beat up until light; then fill the fowl.

Put in a saucepan one cupful of hard cider, two cloves, six peppercorns, one bay leaf and one teaspoonful of sugar. Let infuse for ten minutes; strain and thicken with a teaspoonful of cornstarch wet with a little cold water; simmer; serve hot.

Add these to butter, sugar and milk alternately with three-quarters of a pound of flour; beat until light; then add one teaspoonful of cinnamon, half a teaspoonful of ground mace and half a nutmeg grated When the dough is light add it to the cake batter; turn into a greased tin and bake for one hour in a moderate oven.

Stuff the turkey with bread and sage dressing. Cut a pumpkin into cubes, add a cupful of water, simmer all day; press through a colander; return to the kettle with butter, vinegar and ginger; brown; serve cold.

Soak the ham overnight; boil two hours, then cover with flour paste and bake for two hours; remove the paste and three-quarters of the skin; cover the flesh with cracker crumbs and sugar; arrange cloves about the edge; brown in the oven. Serve with cider sauce and pickled walnuts.

Cook two quarts of Lima beans for half an hour; drain, then add kernels from six ears of corn, a cupful of water, half a teaspoonful of salt and a pinch of pepper; when the corn is tender add a cupful of milk with a little butter. 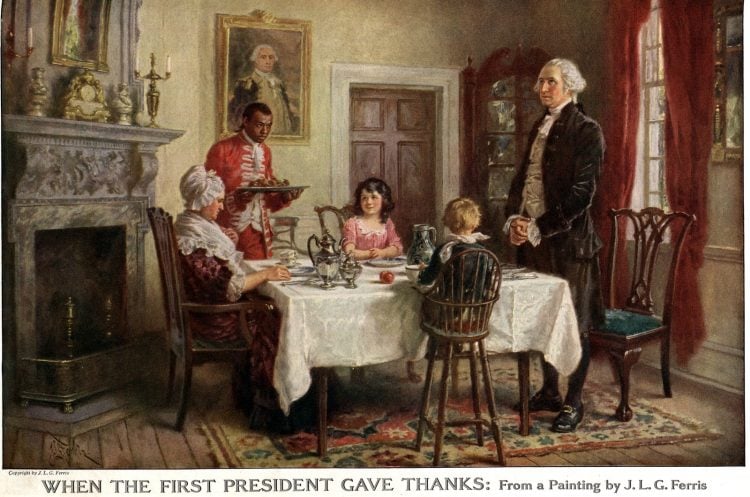 Boil sweet potatoes until they are almost tender; pare, then cut them into slices and arrange in a baking dish with bits of butter, sprinkle with sugar, turn a wineglassful of sherry over them and bake until they are a rich brown.

Beat six eggs, one pound of sugar, half a pound of butter, the grated rind of three lemons and the juice of six; then cook in a double boiler until like honey; when cold turn into a pie-crust shell; trim with fancy crust pieces and brown in the oven. 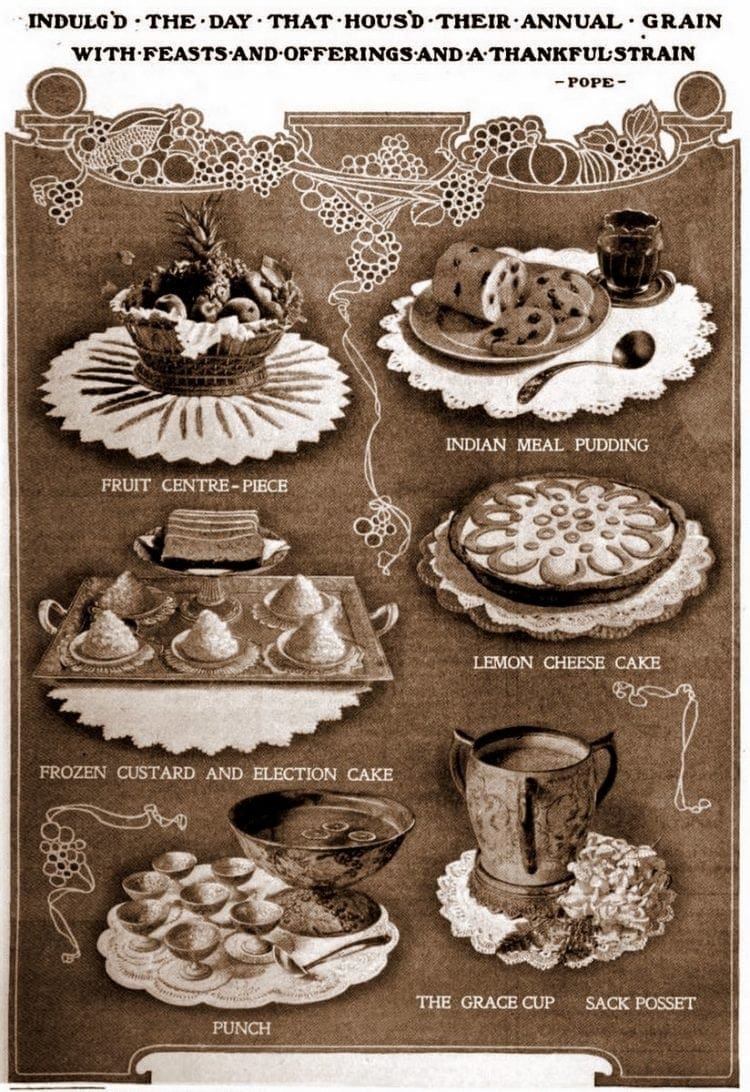 At the conclusion of the dinner, grace is said and the “grace,” or loving, cup is handed around, each guest drinking of the sack posset. Posset properly means “a drink taken before going to bed”; in ancient times, it consisted of milk curdled with wine.

Arrange wheat or other grain heads around an embroidered centerpiece; then place on it a basket or silver or china dish filled with grapes and polished November fruits. Place grape scissors in the dish.

This is served from a buffet to all the guests, who stand and drink the health of absent friends, after which they seat themselves to partake of the good things that follow. 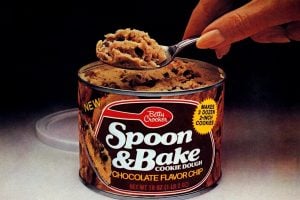 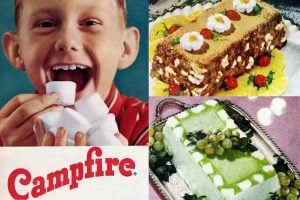 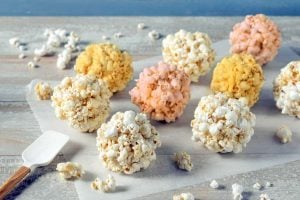 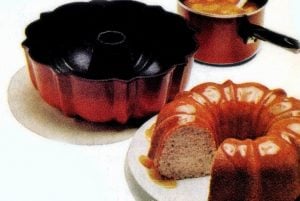