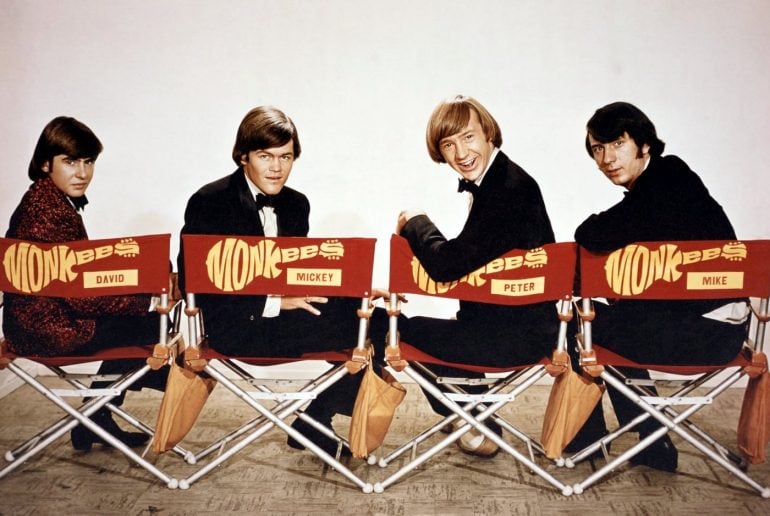 The Monkees may have been a prefab TV band, but there was nothing made up about their real-world success. Here’s a look back! 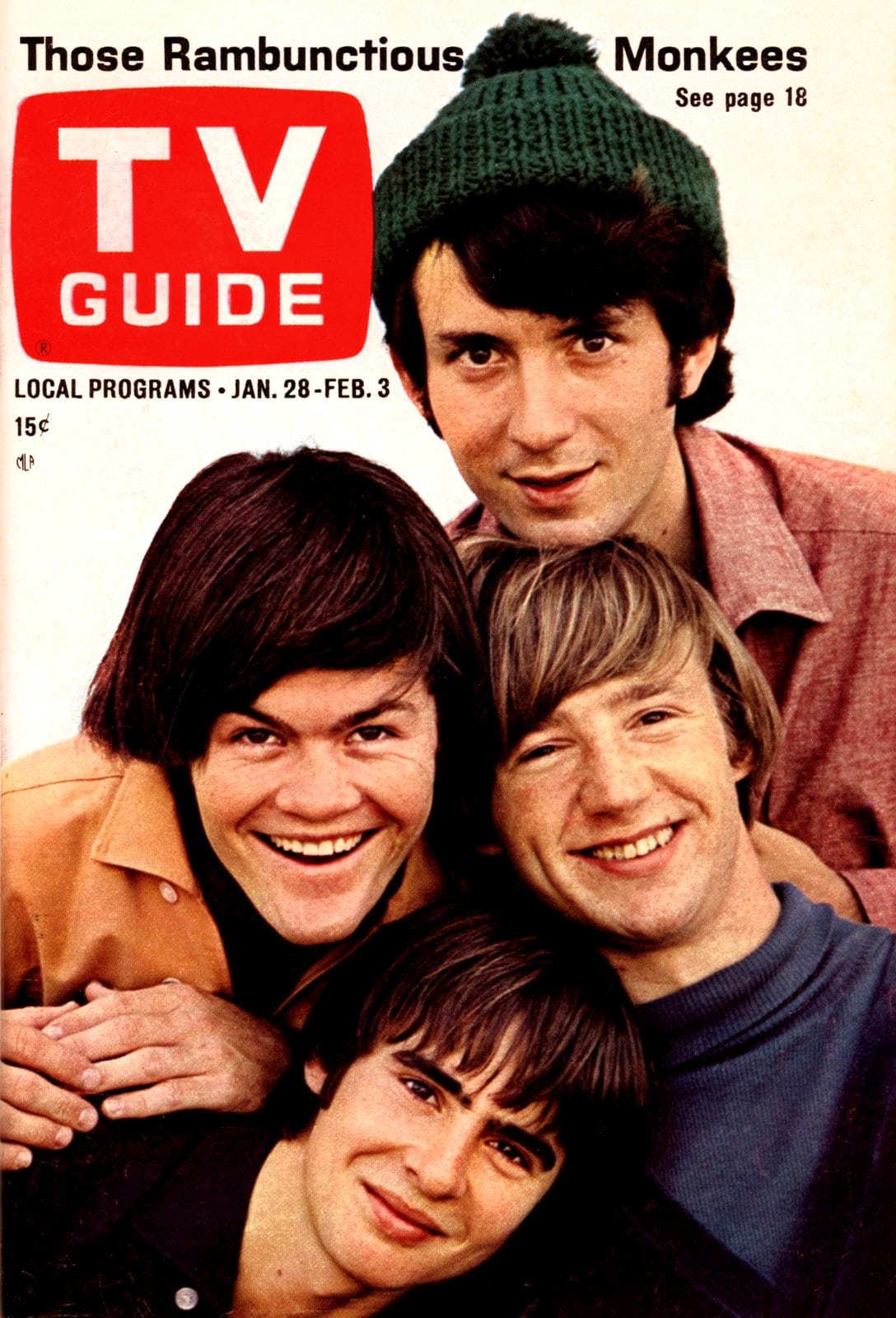 They’re cute as a button, sharp as a tack, hot as a firecracker, new, entirely different from any group you’ve ever seen or heard before — and they’re a bit on the kookie side.

They’re The Monkees, individually and collectively, and if there had been such a thing as television in the Roaring Twenties, and if The Monkees had been around (they weren’t even born then!)… well, they would have been called the cat’s whiskers.

MORE: Flapper slang dictionary: 120 words to help you talk like they did back in the ’20s

The Monkees is the new Screen Gems series, co-sponsored by Yardley and Kellogg’s, and they’ll be seen in vivid color — yeah, man, vivid — Monday nights, early, on NBC-TV and in El Paso on KTSM-TV.

Early, so the teenagers may see and enjoy. And it’s a safe bet parents will join in for the fun and crazy doings, too. It’s that kind of show.

It’s also the kind of show that’s almost impossible to describe. Reasons? Several, but two specifically serve to add to its appeal.

Every photographic trick in the book is used in the offbeat series. You’ll enjoy some of the wildest chase scenes ever filmed — another excuse for mom and dad to watch. Shades of the Keystone Kops! 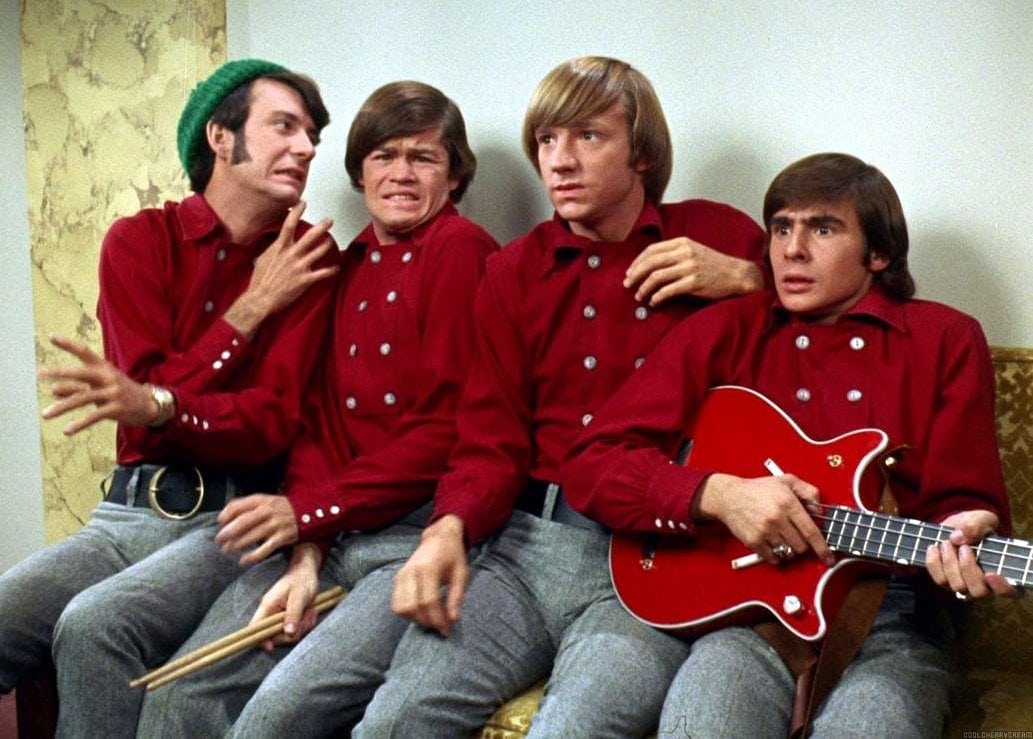 The Monkees: In the bag

The Monkees are real though, all four of them. In the 19-20 age bracket, the fellows are in the same “bag” (English translation: one’s likes, talents, attitudes and behavior patterns). More definitively, their “bag” is, in a general sense, life itself.

The cameras follow them through their collective lives, accompanied by their own music, adventures and misadventures. But, beyond that, the best way to become familiar with The Monkees is to watch the show.

Each member has a name. It’s easier to remember them, individually, that way. The names are, in order, Micky Dolenz, David Jones, Mike Nesmith, and Peter Tork. 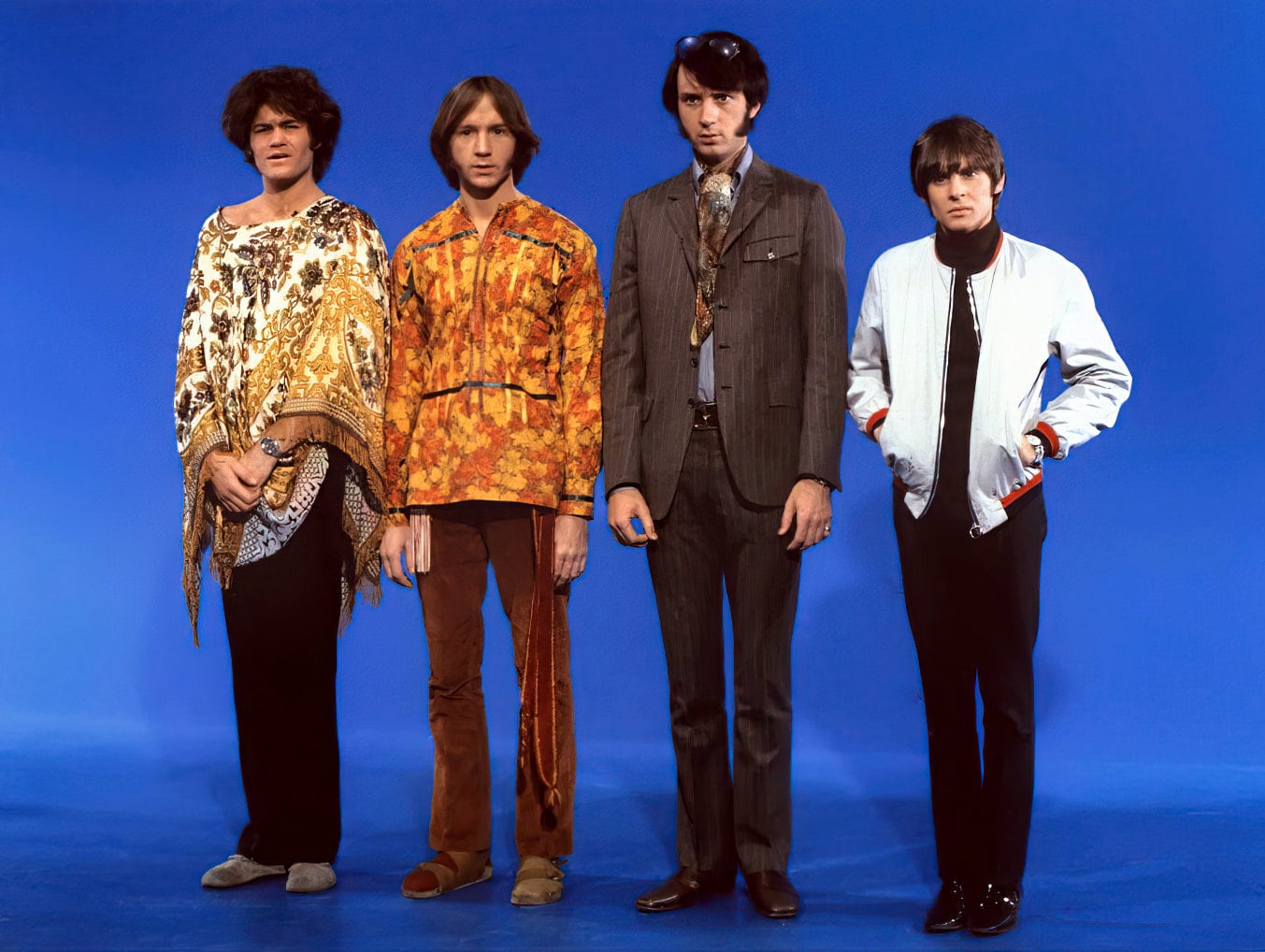 It may be disappointing to learn that they’re all conventional, standard American kids, except the one called “Davy.” He’s standard enough, but he’s from overseas someplace.

Your researchers were unable to trace the accent. He comes well-recommended, though, and he’s compact, alert, and athletic. They’re all athletic.

Have to be, because co-producers Bert Schneider and Robert Rafelson put them through weekly paces which would bring on the horrors to anyone not physically qualified for a life of derring-do.

About the Monkees, individually

Pint-sized David Jones, smallest and swingingest of The Monkees at a strapping 5 feet 3, gave up a career as a jockey to become an entertainer.

He played the role of The Artful Dodger for two years in Broadway’s version of “Oliver,” and it was there that Bert Schneider spotted him and signed him posthaste to a Screen Gems contract. 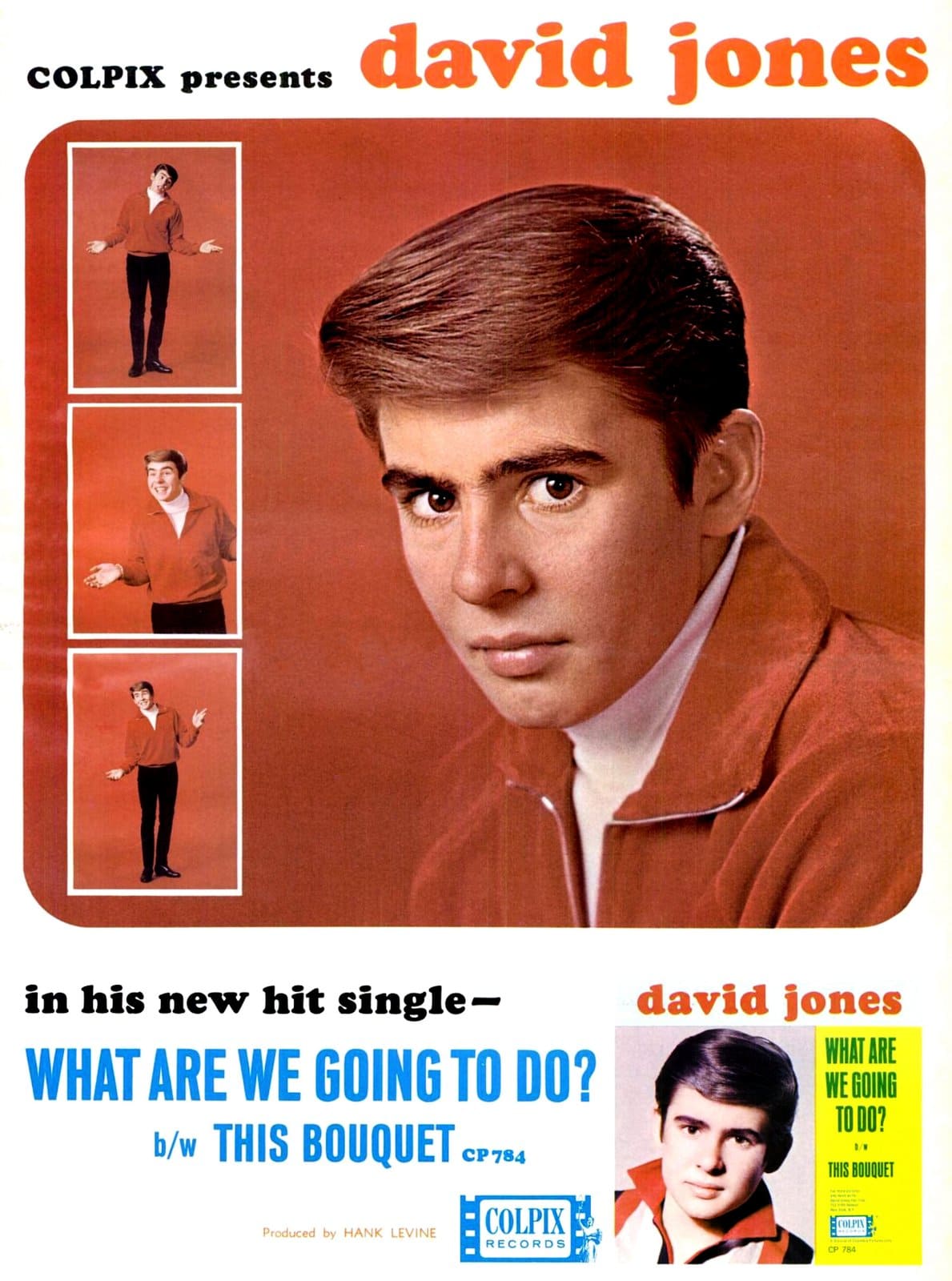 Micky Dolenz is the tall one, a long-legged drummer who is no stranger to television. He was Circus Boy. Recall? That was 10 years ago, and Micky starred in the role for three years.

High school and the study of architectural drafting at Los Angeles Trade and Technical College has occupied his time since. He sings, plays guitar and has made night club appearances and television guest shots.

Dallas-born, San Antonio-reared Mike Nesmith will be quickly called “Wool Hat” by his fans, because he always wears one. Everywhere. To bed, even. Someone gave him a guitar once, but he didn’t know any songs.

That didn’t stop “Wool Hat.” He made one up, has been working at it ever since, and eventually he piled into his sports car and headed for Hollywood, a five-a-day road tour as member of a trio, and eventually, to The Monkees.

Peter Tork, Monkee No 4, is a native of Connecticut, where his father is an associate professor at the University of Connecticut. Peter worked in a thread mill after a brief (and unsuccessful) try for a higher education at Carleton College, Minn, but decided that wasn’t for him, either.

But he had always been something of an amateur musician-singer so he got a job in Greenwich Village as a folk singer, went on a tour, and he has been a working professional ever since.

All share a deep understanding of creative dogma, whatever that means. 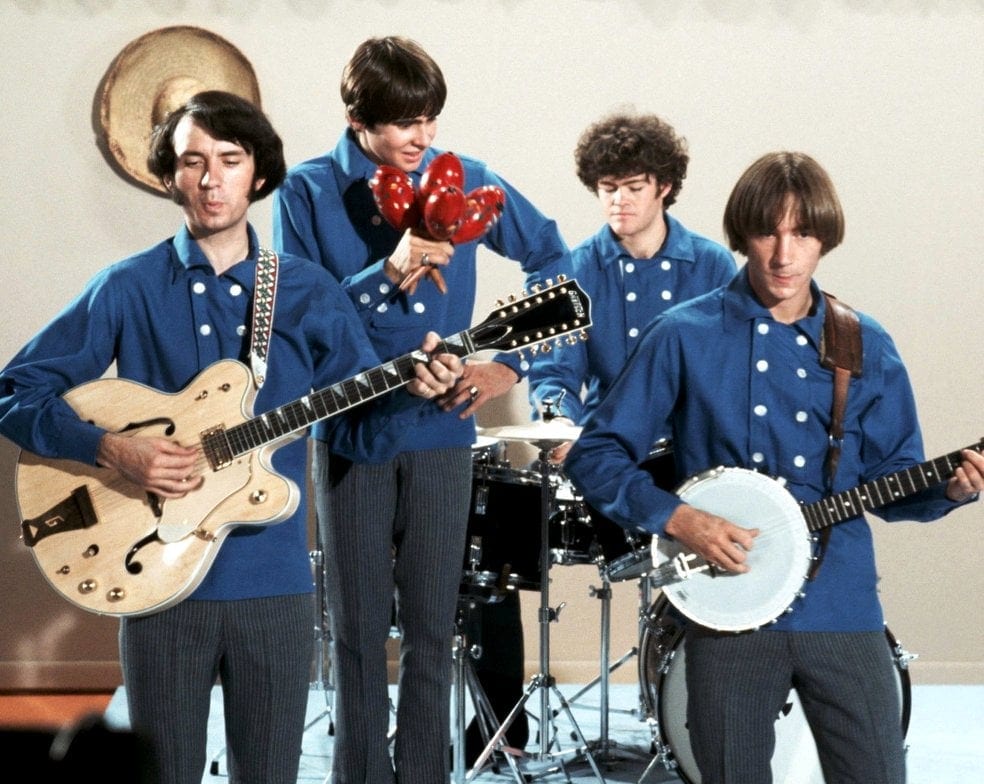 Like most basically nice — and occasionally nutty — youngsters, The Monkees are in the throes of that “we-have-opinions-too” age. What follows is an exclusive interview granted, under rather mad-cap conditions, on the set.

If you think it’s confusing, consider this: Our reporter dictated the interview from the hospital. It had to be dictated. His arms, locked tightly behind his back by a restrainer, could not manipulate his typewriter. 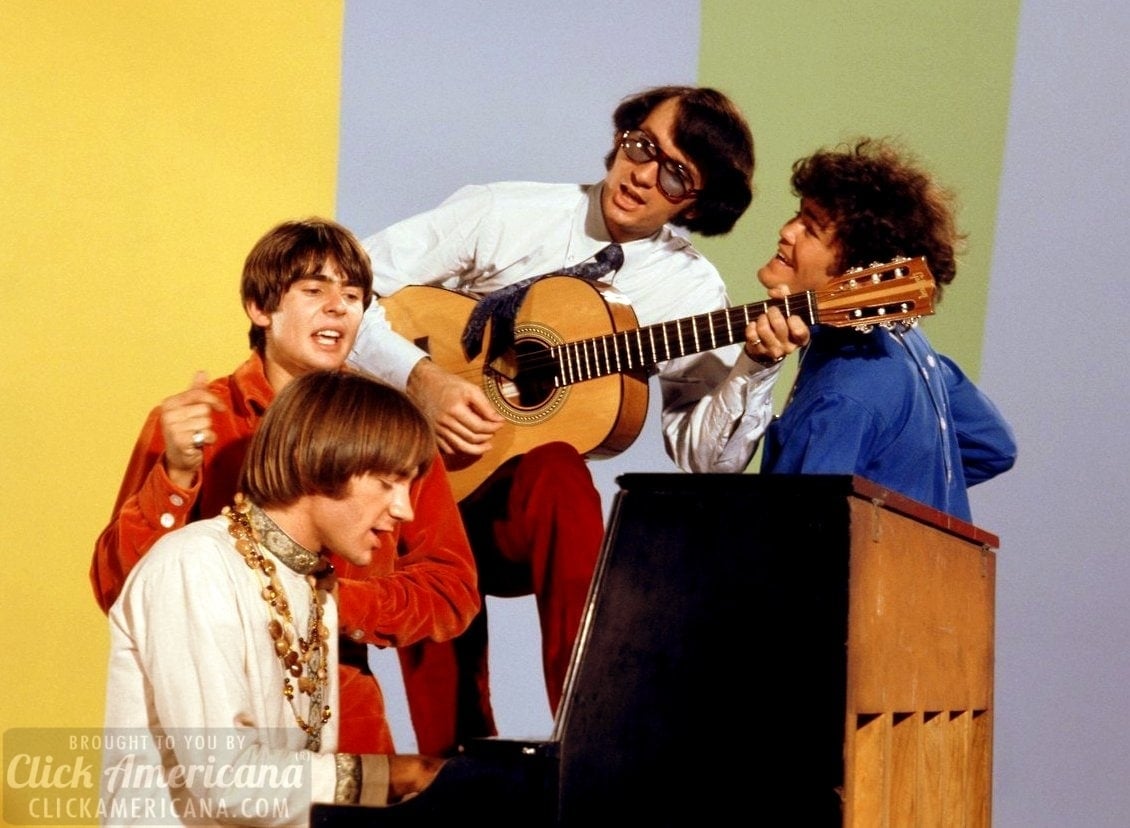 QUERY: Gentlemen, since this is the first time I have ever interviewed four people at one time, I’d like to suggest we try not to interrupt or talk all at the same time. Agreed?

QUERY: Now, now! Remember the rules! Seriously… what’s The Monkees all about?

DAVY: It’s a tidied-up version of the Patty Duke Show. Mike thinks a lot of Patty.

MIKE: Would you believe a Mod Documentary?

PETER: Or the Hit Parade of the soaring ’60s.

QUERY: Look here, I suspect you’re just doing a spoof on The Beatles. After all, I’ve seen the pilot film and…

DAVY: By George, he’s got it! We’re spoofing. It’s Spoof City all the way. But we’re spoofing the Bronte Sisters.

QUERY: Now we’re getting someplace. Another question. Why do you and so many like you wear sloppy clothes and long hair?

PETER: Because we’re indifferent to fads.

QUERY: I get the message. I think. Now, about respectability. What do you guys really think of it?

MICKY: Do you mean fiscal integrity — balanced budgets, and all that?

QUERY: I mean respectability and social acceptance as opposed to offbeat behavior.

DAVY: We think they are groovy and we also think respectability is not always a symptom of sanity.

PETER: You read that on a box of cereal, Davy.

DAVY: No, I saw it on Lawrence Welk’s tee-shirt.

QUERY: I don’t know whether you’ve given me much of an interview. But I must say I have enjoyed your humor — off and on.

QUERY: I guess not.

MIKE: You’ve been a real sport.

QUERY: It’s my job. I know you’ve been putting me on. Why be sore about it? Besides, I always shake like this at 11 in the morning.

The Monkees’ “Daydream Believer” hit the number one spot on the Billboard Hot 100 chart in American in December 1967, where it stayed for four weeks.

It all started just about two years ago. The idea was repulsive to some of us then: to be asked to accept [figuratively] the offspring of a bankbook father and a computer mother as music. It still is.

But what was hardest of all was the fact that, deep down, we knew all along that The Monkees were good.

Oh, sure, we talked about the fact that they couldn’t even play their own instruments at first and that they were just copies of other proven formulas (computer, computer, computer, the cry kept coming) and that everything they did was watered-down imitation — but we knew, even in the beginning, that “Last Train to Clarksville” was a good record, and that this new “monster” was going to go places whether we liked it or not.

The more popular they became, the more we protested, calling the whole thing crass commercialism (or worse). We wouldn’t watch their television show, naturally, insisting it was just derivative Richard Lester-Beatle cinema.

Then came “Sgt. Pepper” and the real split. Aha, we thought. We can leave The Monkees to the teenyboppers and make the new psychedelized, experimental Beatles our intellectual heroes. 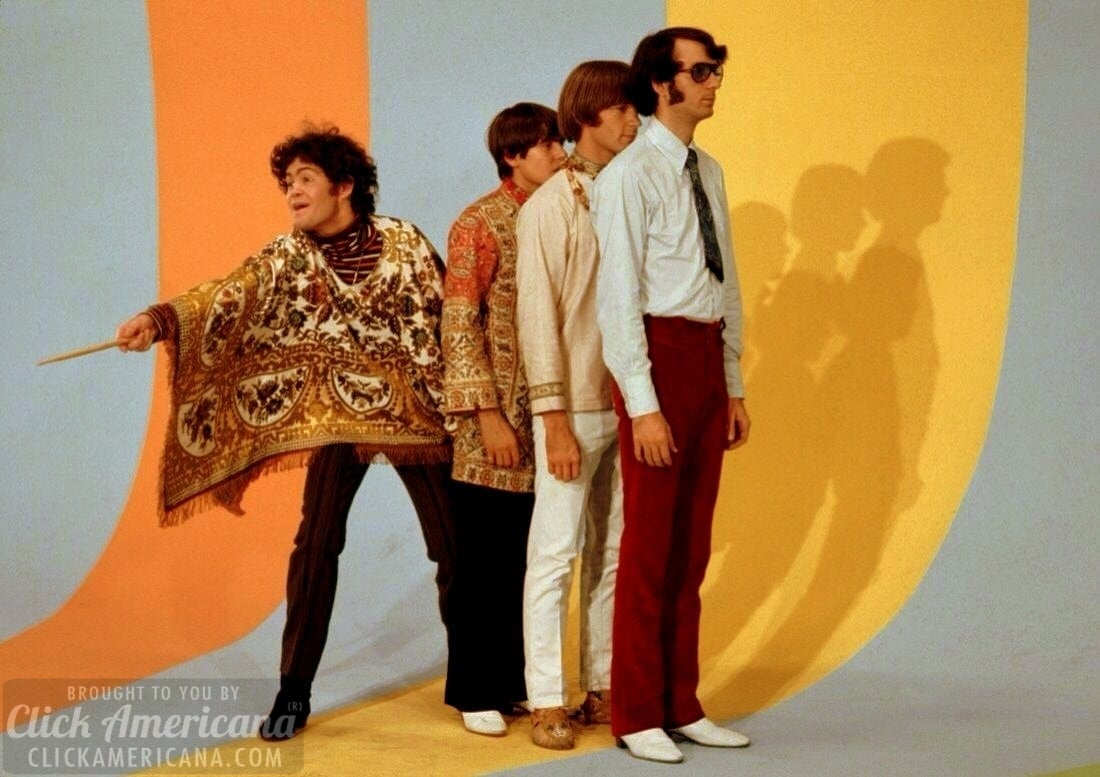 The Birds, The Bees, and The Monkees

But that only worked for a little while, as most over-simplified categorizing does. The Monkees still haven’t produced a “Sgt. Pepper,” perhaps, but suddenly the old stock put-downs for the four don’t work anymore.

They’re not poor musicians. They’re not dull or uninventive. They’re not “schlock rock, prepubescent division” [whatever Cheetah magazine may say].

Nobody lasts in popular music today who stands still or does what he did the day before. The Monkees still may not be great, but they’re certainly moving on up.

The new album, “The Birds, The Bees, and The Monkees” [Colgems, COS 109; 5 stars], admittedly still includes such teen subjects as homecoming queens, circus posters, and dream worlds [which may not really prove teen subjects after all] but there’s not a weak band in the whole album, and it’s hard to find rock anywhere better than “Tapioca Tundra,” “Valleri,” or “Daydream Believer.” 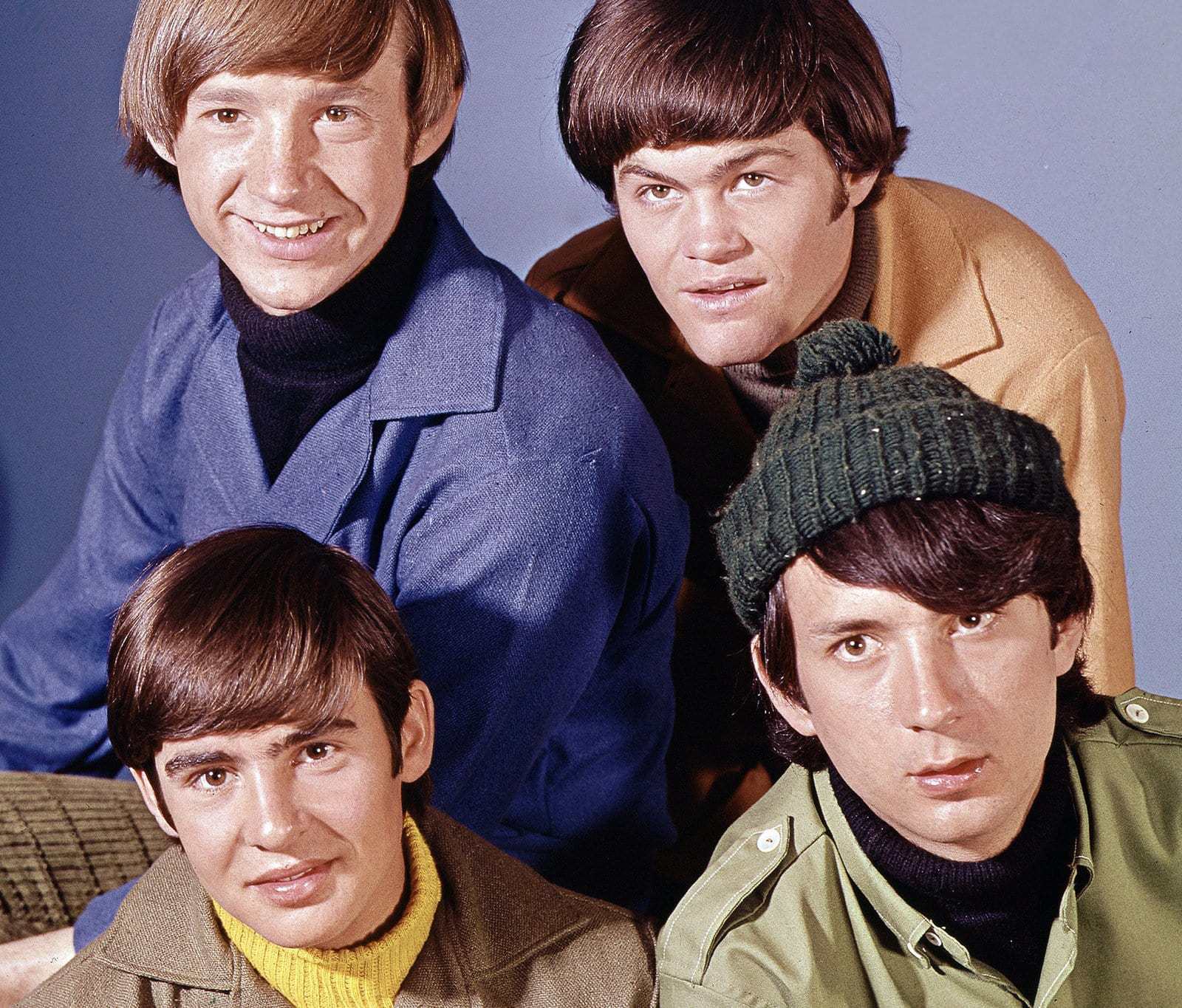 “Writing Wrongs” has jazz improvisations that go back and forth between organ and piano. “P. O. Box 9847” explores the lonely world of newspaper want-ad personals.

“Zor and Zam” mixes folk myth and poetry. “Auntie’s Municipal Court” tries to prosecute after “somebody stole their mind.”

“Magnolia Simms,” with its mono track and intentional skipping plus surface noise, is far more successful in getting back into the 1920s sound groove than the similar “Just Like Gene Autry: a Foxtrot,” in the latest Moby Grape album.

The new single, “D. W. Washburn” [Colgems 66-1023; 5 stars], likewise harks back to the ages of flappers and swing, having fun both vocally and instrumentally. The flip, “It’s Nice to Be with You,” is one of the group’s better ballads. 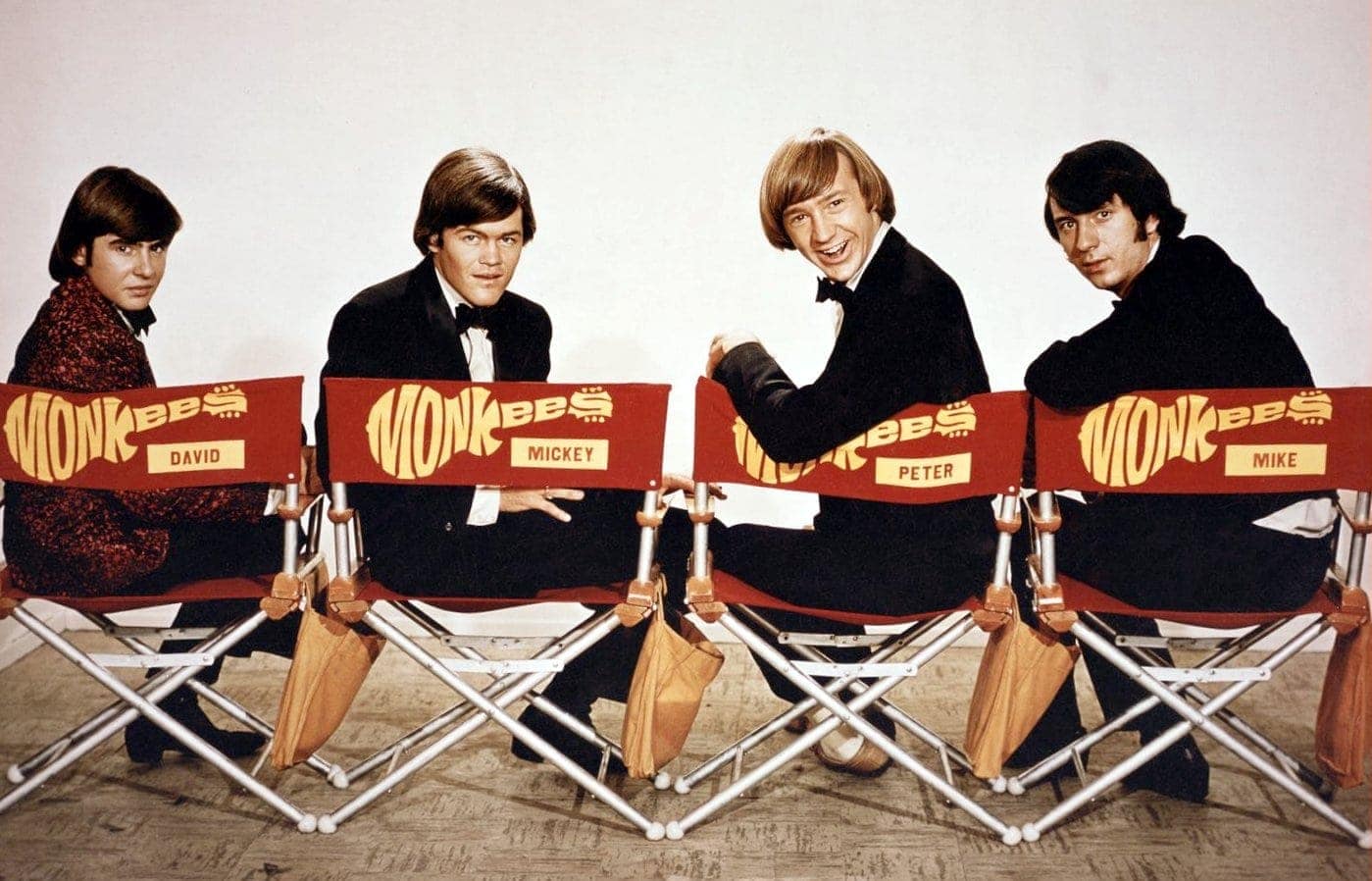 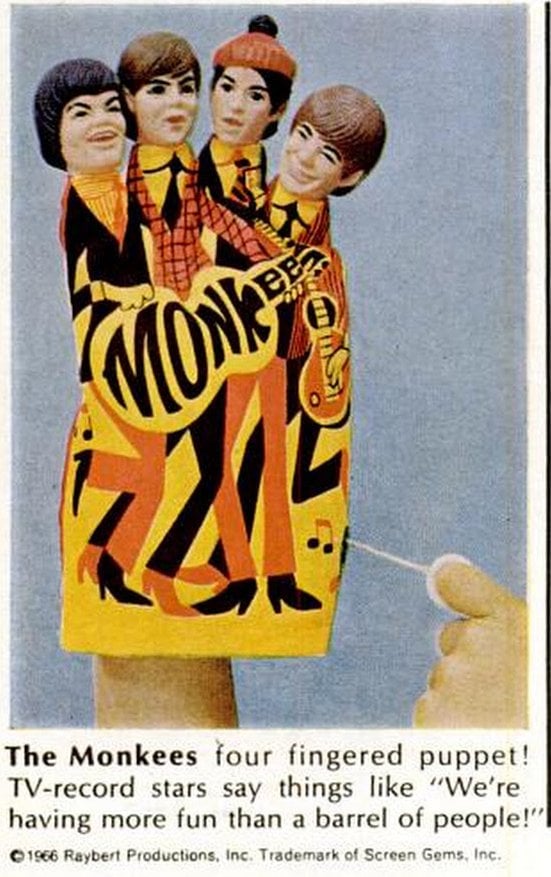 The Monkees make friends with Kool-Aid

The Monkees starred in a series of Kool-Aid TV commercials (and some print ads) during 1969 and 1970, after Peter Tork had left the group. Here’s a look at some of the spots. 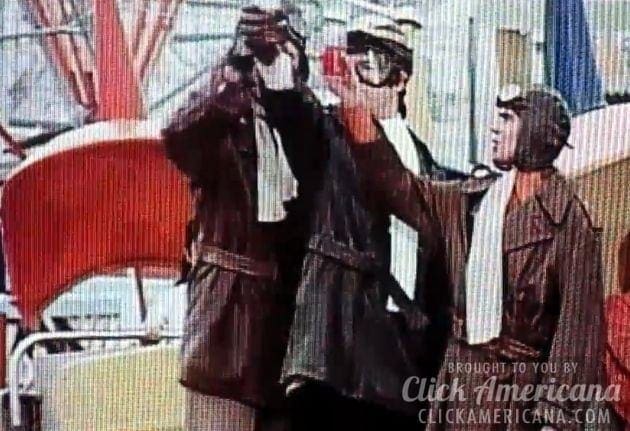 There’s nobody here but us Monkees 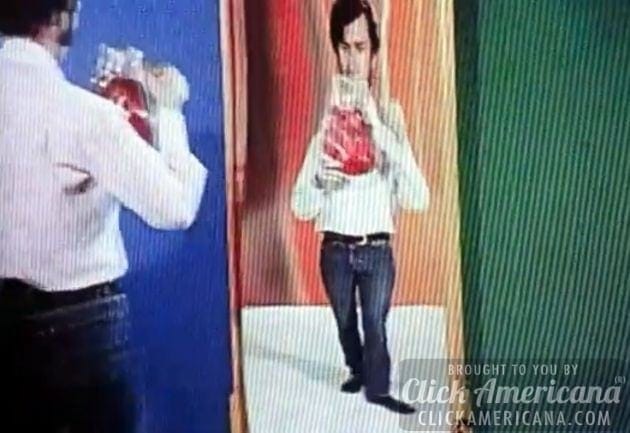 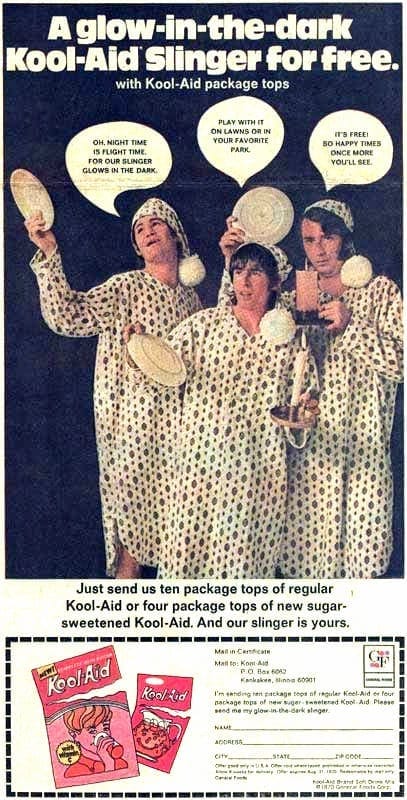 MORE: Oh yeah! Vintage Kool-Aid soft drink powdered mix, from the ’30s to the ’90s – plus all the flavor names

This track was originally written by Neil Diamond, but the version best known is this one by the Monkees, with Davy Jones on lead vocals.

It was recorded in October 1966, and featured on three episodes of their show in the spring of 1967. 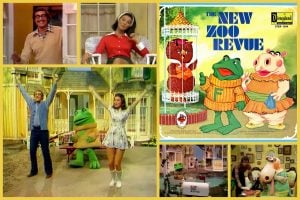 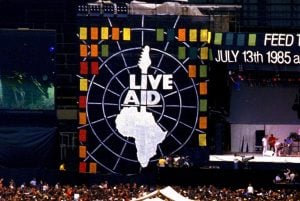 Live Aid in 1985: Look back at the record-breaking concert event beamed across the globe