Here are some more reminders of that Disney attraction, which opened in the Anaheim theme park in 1966!

This postcard, showing the attraction’s white and gold facade, was apparently produced from the late 1960s to the early 1970s: 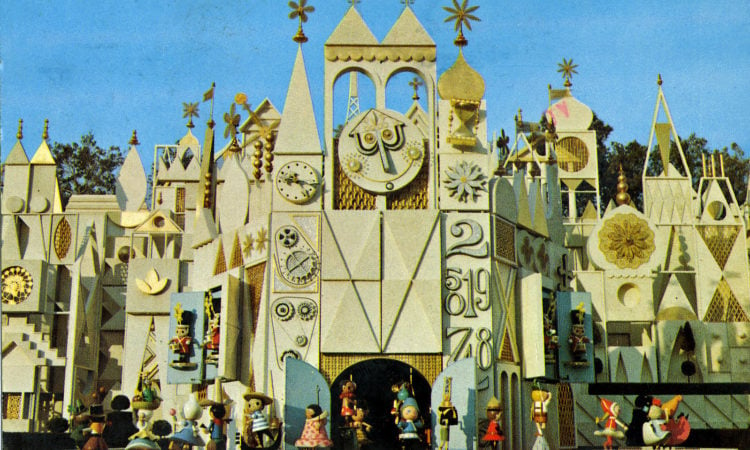 This brochure/map dated 1967 was published to showcase the ride’s partnership with Bank of America, and details its “space-age animation.”

Audio-Animatronics is the word coined by Walt Disney to describe the ingenious electronic system used to animate ‘It’s a Small World.’ The system, a fascinating adaptation of space-age electronics to the field of entertainment, combines and synchronizes voices, music and sound effects with movement. Disney technicians, appropriately called ‘Imagineers,’ have used a one-inch magnetic tape, which contains 32 concurrent tracks, to control all the sounds and movements in the entire ‘Small World’ show.

The tape sends music and voices simultaneously to speakers throughout the ride, while sound impulses operate pneumatic and hydraulic valves inside the performing figures. By this electronic miracle, ‘life’ is brought to the little people of ‘It’s a Small World.’

It’s a Small World: A smile in any language

As the ride begins, on every side is the whimsical handiwork of Disney artisans. Just ahead is the storied span of London Bridge. To the right looms the filigreed replica of the Eiffel Tower. On the left, in all its white majesty, stands the Taj Mahal. A golden Oriental sun hangs in the sky… wearing a flowing veil. A starch-stiff Buckingham Palace guard stands at attention… With an egg on his head.

You are surrounded by a flood of music as the boat glides along the Seven Seaways, and one scene merges into another as the children of “Small World” sing and dance to the show’s lilting title tune. There are hundreds of animated figures of children, animals and toys performing in the cast. A gondolier guides his vessel as he sings the show’s theme song in the style of an Italian aria; a pint-sized hula dancer undulates to the same notes, orchestrated in the soft, lazy melody of the South Seas.

Bank of America’s philosophy coincides with that expressed in the lyrics of the “Small World” song… a smile means friendship in any language.

Here are the song’s lyrics once again, for old times’ sake:

by Richard M and Robert B Sherman

There is just one moon,
and one golden sun.
And a smile means
friendship to every one.
Though the mountains divide,
and the oceans are wide,
it’s a small world after all.