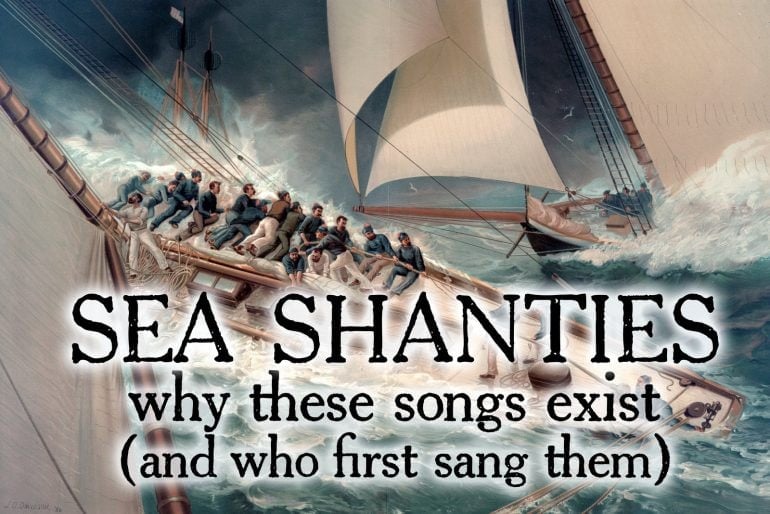 If you’ve been on social media and have been seeing the term “sea shanties” a lot lately — no, you’re not the only one who hadn’t heard of them before.

But the sea shanty is actually nothing new. In fact, these old songs have been around for centuries, or, for at least as long as sailing ships.

That’s because the shanty’s origin story begins with the people who used to work on the old ships, with the lyrics and melodies meant to help punctuate and add punch to the lifts, the hauls and the pulls.

To tell more of this ocean-faring tale, we looked way back for the story — first journeying back to 1935, and for the second, tripping back to just before the turn of the 20th century.

We’ve also included the music and/or lyrics to many of these tunes, including ones you probably already know, like “Blow the Man Down” and “Early in the Morning,” which is perhaps better known as the one with the line, “What shall we do with a drunken sailor?”

With those as your guide, maybe you can even be the next Tik Tok star. Certainly seeing #seashanties trending online is proof that stranger things have happened. 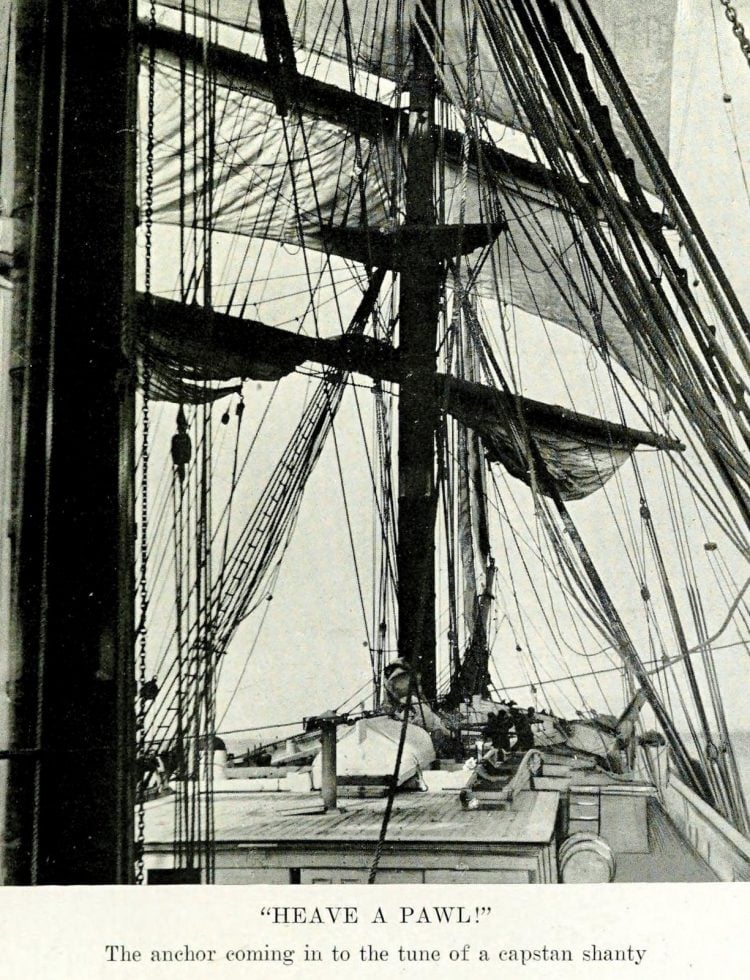 The history of old sea shanties and the shantymen (1935)

Why are they known nowadays as ‘sea shanties’? The shanty is a working song of the sea: it was born and bred on the sea, and is still grimed with salt. The sailor would as soon speak of ‘sea shanties’ as of ‘sea ships.’

The whole aim of the shanty, in the old sailing ships, was to add rhythm and briskness to the combined heaving and hauling. They were not sung for entertainment.

Though it would be a mistake to label individual tunes too rigidly, there are two, or perhaps three, fairly well-defined types which were used for particular kinds of work. They can be roughly summed up as the capstan, the pumping and the halliard or hauling shanty.

The last line of each verse, as a rule, was the signal for the big concerted pull on the particular job in hand. Sometimes a single word or a phrase gave the moment.

ALSO SEE: The Pirate Code: The rules of the sea for the infamous Black Bart’s ship in the 1700s 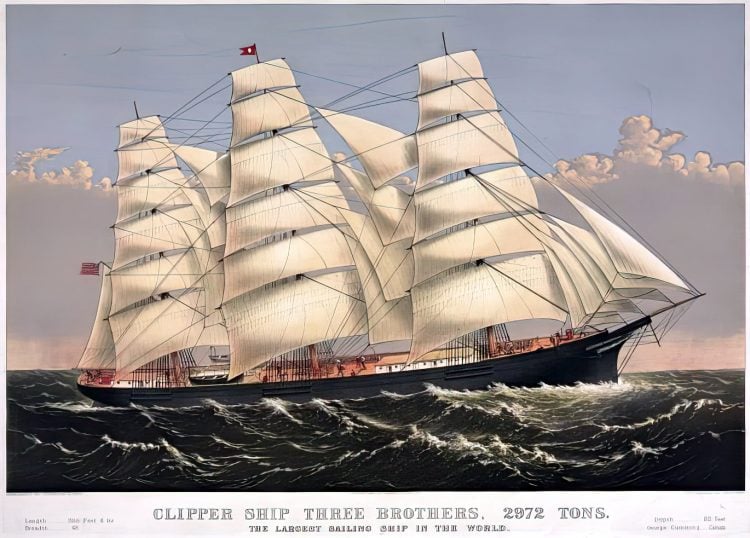 The shanty was not by any means simply tolerated onboard ship from any amiable notion that it was pleasant to hear the men sing. It was accepted as a direct incentive to effective work.

In fact, in the days of the “hell ships,” the mates were sometimes known to force a shanty from their unfortunate shanghaied crews at the end of a fist — certainly not from any esthetic motive.

In most ships, the shantyman was a recognized institution. He was usually exempted from taking part in the actual heaving. It was his job, standing to one side of the working party, to troll out the solo part or to lead the singing in an “all together” shanty. 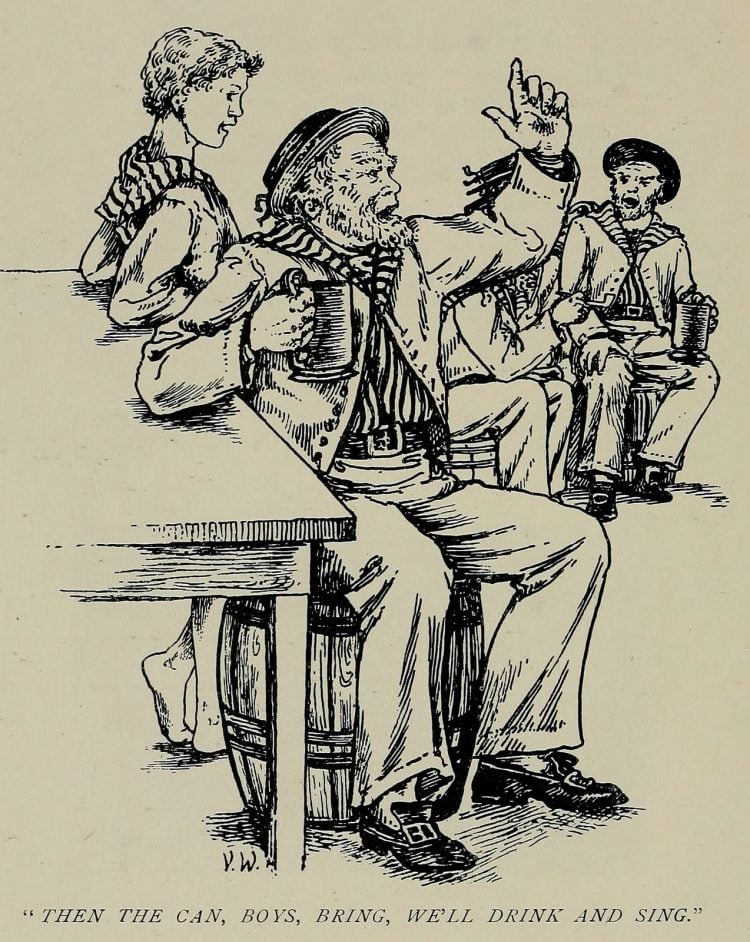 If he happened to possess a gift for extemporizing, so much the better. Apart from the refrain, the words of a shanty were largely as he chose to render them.

He might work in topical rhymes on the ship or the voyage, indulge in personalities aimed at the mates, or, if all else failed, fall back on the shortcomings of the eternally maligned cook. The shanties helped amuse the boys and brighten up the work.

As a logical result, few of them have been passed on with words that really accord with their lovely melodies. They are known to us as all such music of the people handed down by ear alone.

Are as old as the sea itself and very useful: Many a “Dry pull” has been saved by a “Shanty.”

Sample verses of the songs sung by the jolly tar: “Haul the Bowline,” “Sallie Brown,” “John Francois” and Others. 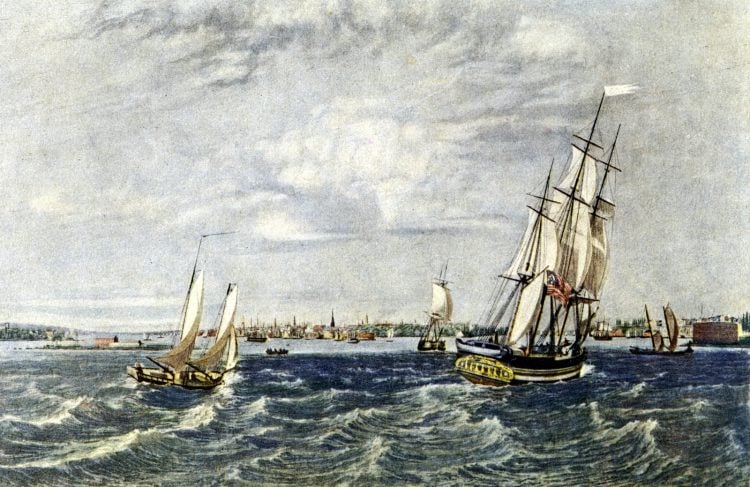 Something very different from the tumble-down structures of Shantytown. It is bunts of words and music, and the sailor who, when a “dry pull” is imminent, can add a lean-to to his “shanty,” is a favorite with officers and men.

A “shanty” in jack tar lingo is a corruption of the French “chanter,” and would, in polite circles, be called a chant.

But happy Jack wouldn’t know what you meant if you asked him for a chant. All he’d know would be that you were a landsman, and he’d proceed to jolly you for all he was worth. 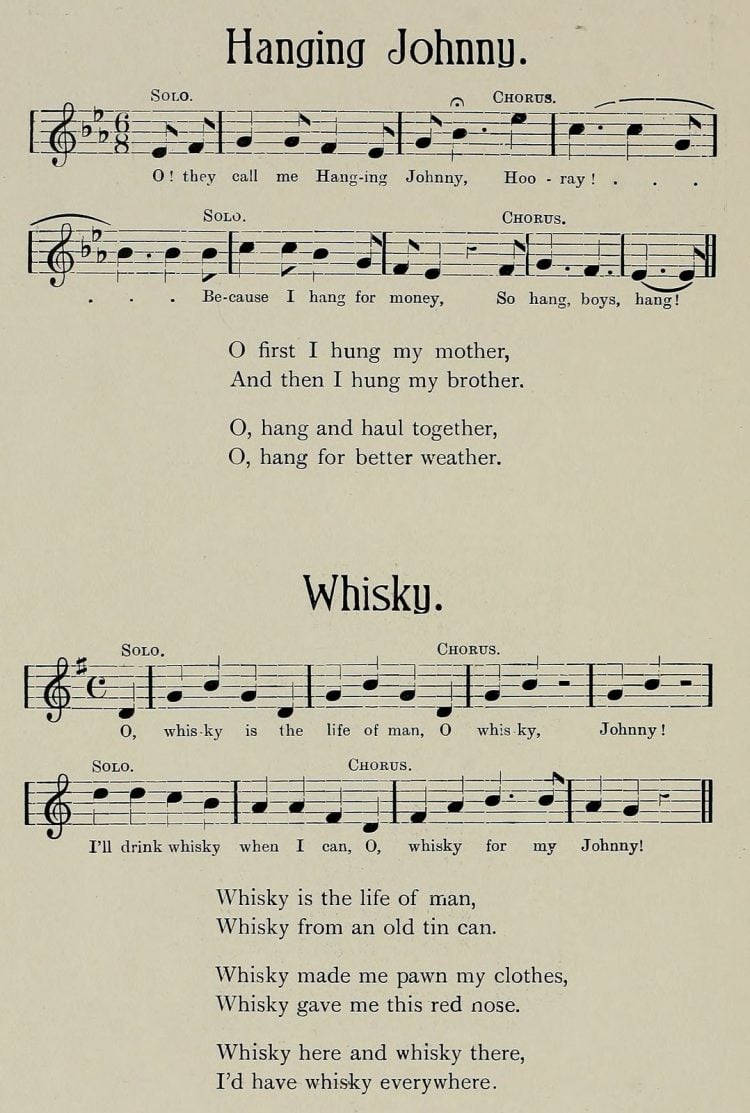 “Sea shanties” are as old as the sea itself, and sailors of every nationality have them. Anyone who wanted to make a complete collection of “shanties” would have Japanese and Chinese words and intervals to deal with, as well as English, French, Italian, German, and Russian.

A “shanty-man” is highly prized aboard ship. Many a “dry” pull has been saved by a good “shanty” started at the right moment, and with some improvisation to suit the occasion.

A shantyman who can improvise well on words is a genius in his way, and with him at the sheets, the mate’s order to “belay” will come wonderfully soon.

ALSO SEE: Where did the infamous pirate Captain Kidd really hide his treasure? (1909) 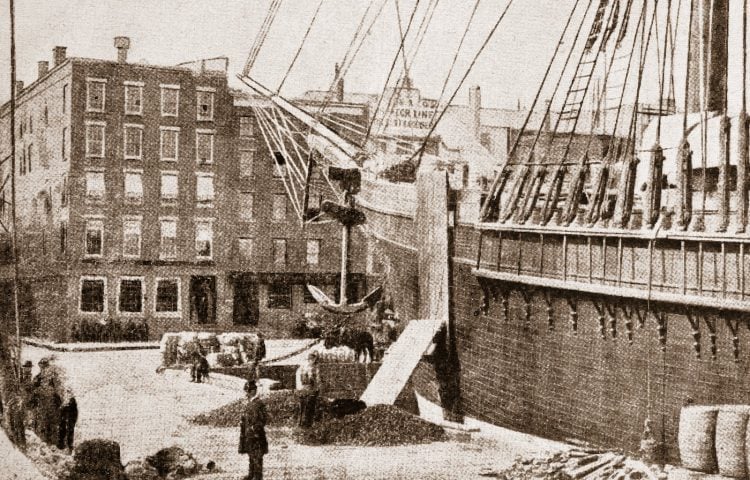 For occasions when a few strong pulls are needed, such as in boarding a tack, hauling aft a sheet or tautening a weather brace, the favorite shanty is “Haul the Bowline.”

Here are the words and music, the latter lively enough, the pull coming on the final “haul.”

If the first verse doesn’t do the business, the shantyman can add a variety of verses, of which these two are most usual:

They never fail to fetch the mate’s “be-lay!” Among shanties for long hoists — topsail halyards, for instance — the most dismal of all shanties, “Oh, Poor Reuben Ranzo,” is the most popular. A more lugubrious air was never heard afloat or ashore.

MORE: Juneteenth: What it means, and why it’s still celebrated

The hoist comes on the italicized words:

The favorite heroine with shanty men is the girl mentioned in the following:

Heroines of the Shanties 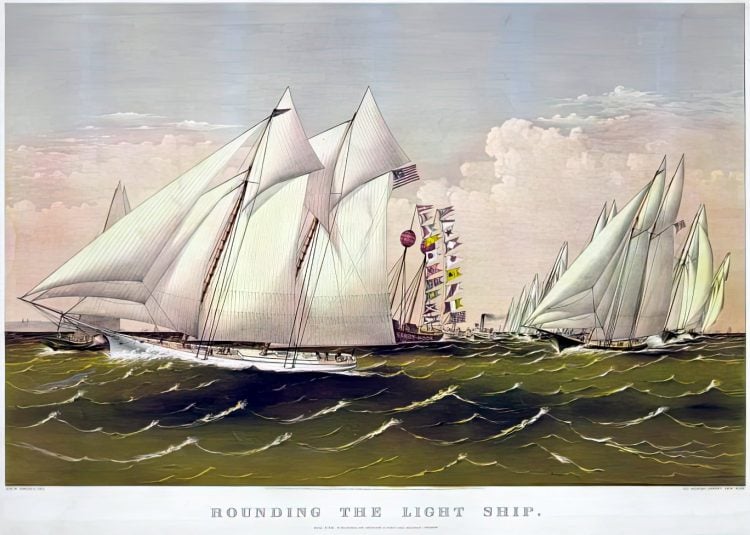 It is evident from this and other shanties that the females mentioned therein do not aspire to social prominence. For instance:

I had a girl, her name was Lize,

She put whisky in her pies.

For without whisky I can’t do.

This shanty, though hardly suited to a prohibition meeting, is a dandy as a holster. Napoleon Bonaparte figures throughout the length and breadth of one shanty whose refrain is “John Francois.”

Afterward he crossed the rocky mountains” and “made a mistake at Waterloo,” which seems to locate the scene of his defeat upon our Pacific slope. But a student of sea shanties soon learns not to be surprised at any statement which may be advanced or at any liberty of rhyme and meter, “High-low!” is a shanty which gives great latitude to a clever Improviser.

DON’T MISS: V is for Victrola record players: The history of the famous gramophones that entertained millions 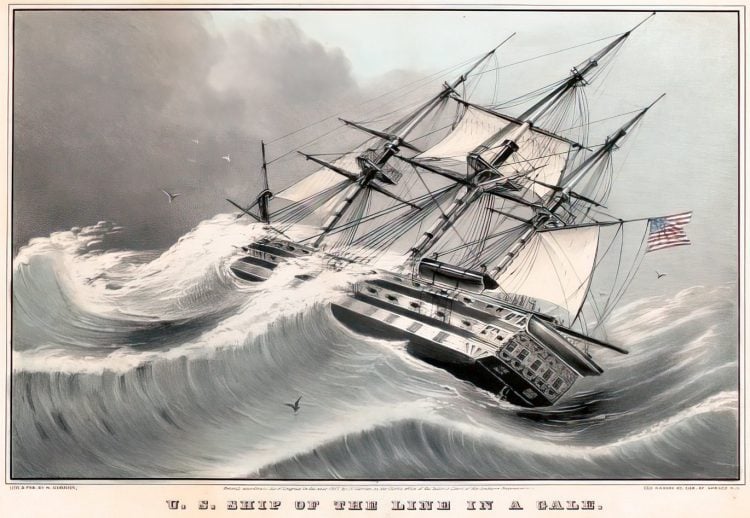 We’ll all brandy and gin,

We’ll all shave under the chin.

In Amsterdam once dwelt a maid

And making baskets was her trade.

Another popular shanty is the “Knock a Man Down” chorus:

Solo — I wish I was in Mobile Bay.

Chorus — This is the time to knock a man down.

Of course, a clever shantyman can wish himself anywhere, I. e.: —

I wish I was in New Orleans,

Where Jackson gave the British beans.

I wish I was in Liverpool,

A-going to a Yankee school.

But the greatest of all shanties concerns “Old Stormy.” Here the sailor takes the Storm King himself for a hero, and disregarding all the perils of the deep makes sport of him — plucks him by the beard, in a spirit of bravado:

Fill in the choruses and these lines give you the rest of this giddy shanty:

I wish I was old Stormy’s son,

I’d buy me a bark of a thousand ton:

I’d fill her up with New England rum,

And my old shellbacks, they’d have some.

Now if ever again I get ashore

I’ll wed the gal that I adore,

And If ever childer we should have,

I’ll bring him up as a sailor lad.

The favorite capstan, windlass, and pump shanty, when continuous force instead of sudden hauling must be applied, is “Paddy, Come Work on the Railway!” 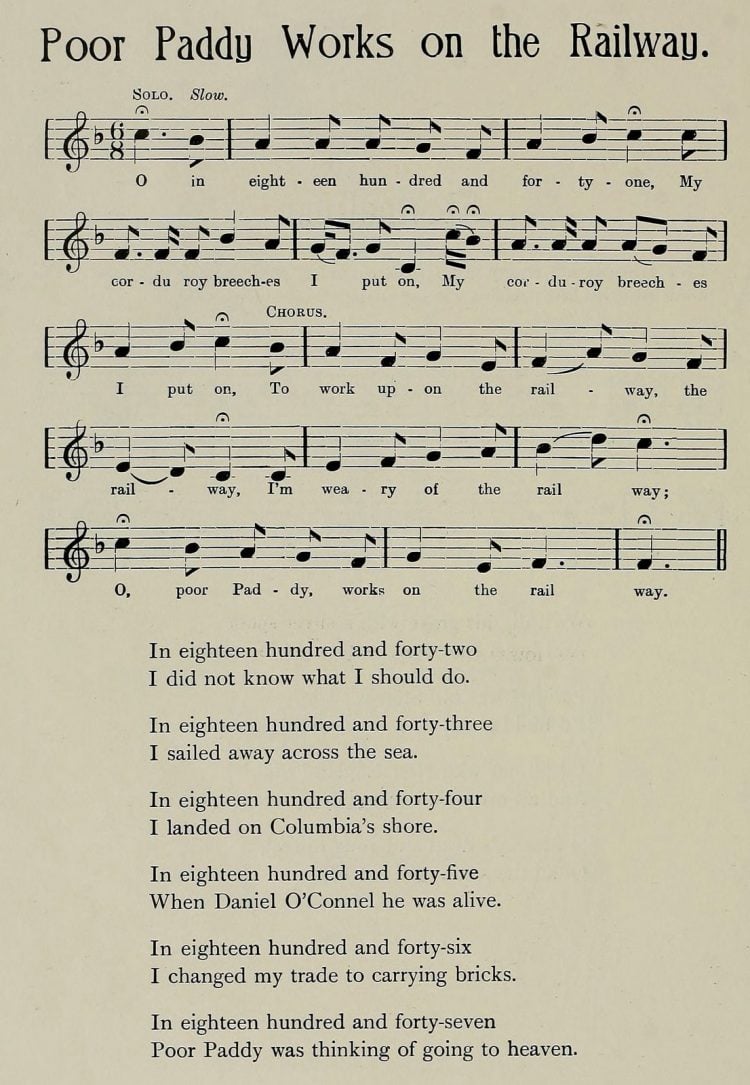 In eighteen hundred and sixty-three,

I came across the stormy sea,

My dung’ree breeches I put on,

To work upon the railway

This shanty, though still current, is out of date. For it is Tomaso, not Paddy, who now works on the railway.

This sheet music and the following pieces come from the old “Ships, Sea Songs and Shanties” book, published in 1910. 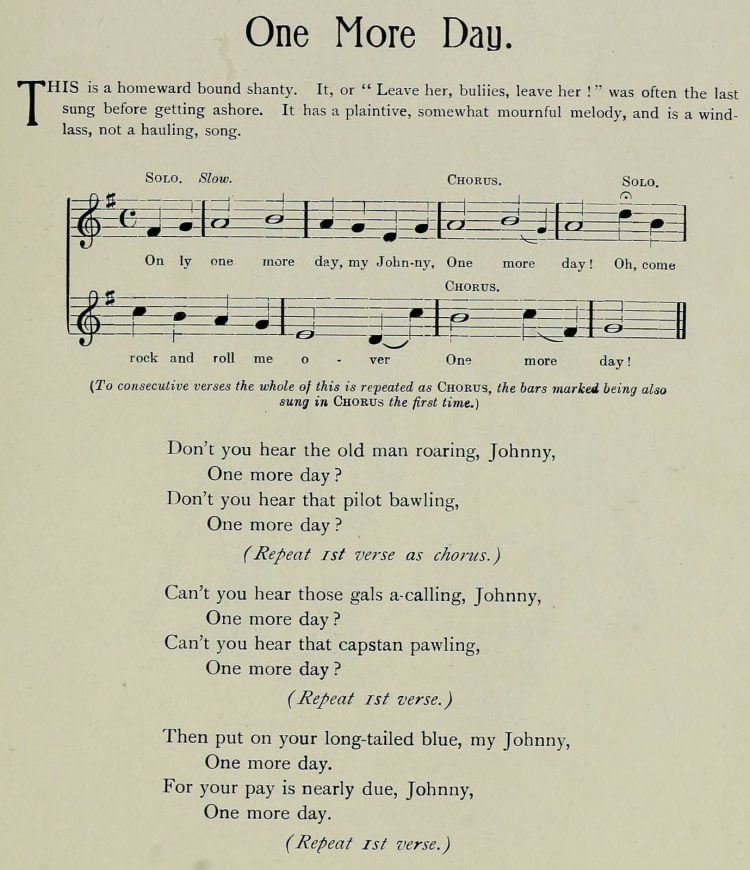 Sea shanty song “Early in the Morning” music and lyrics 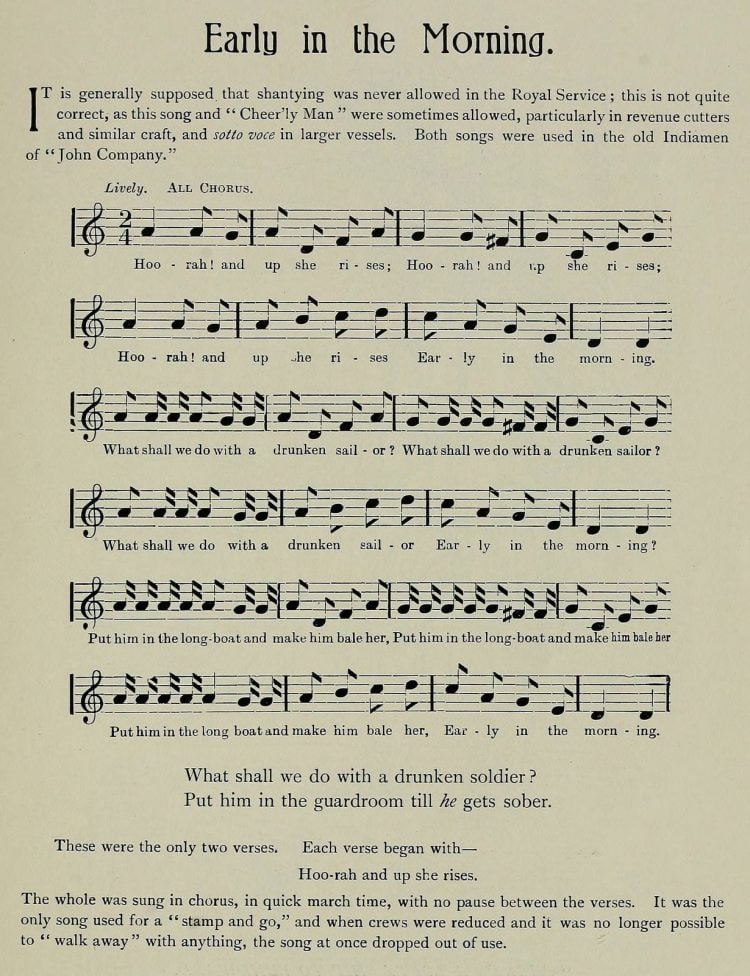 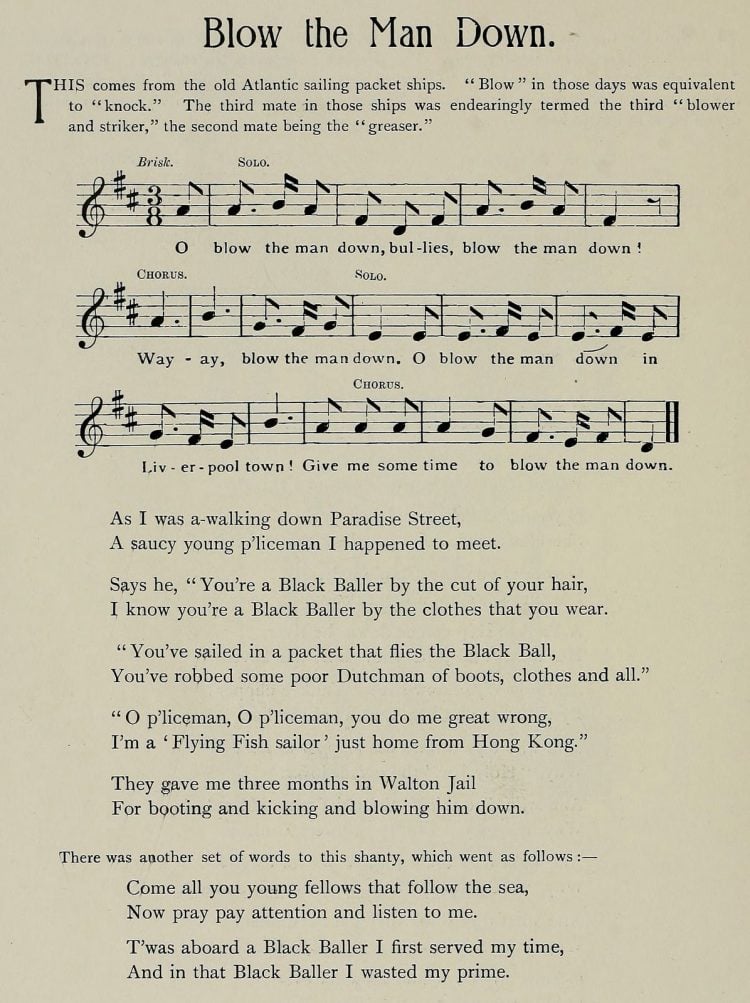 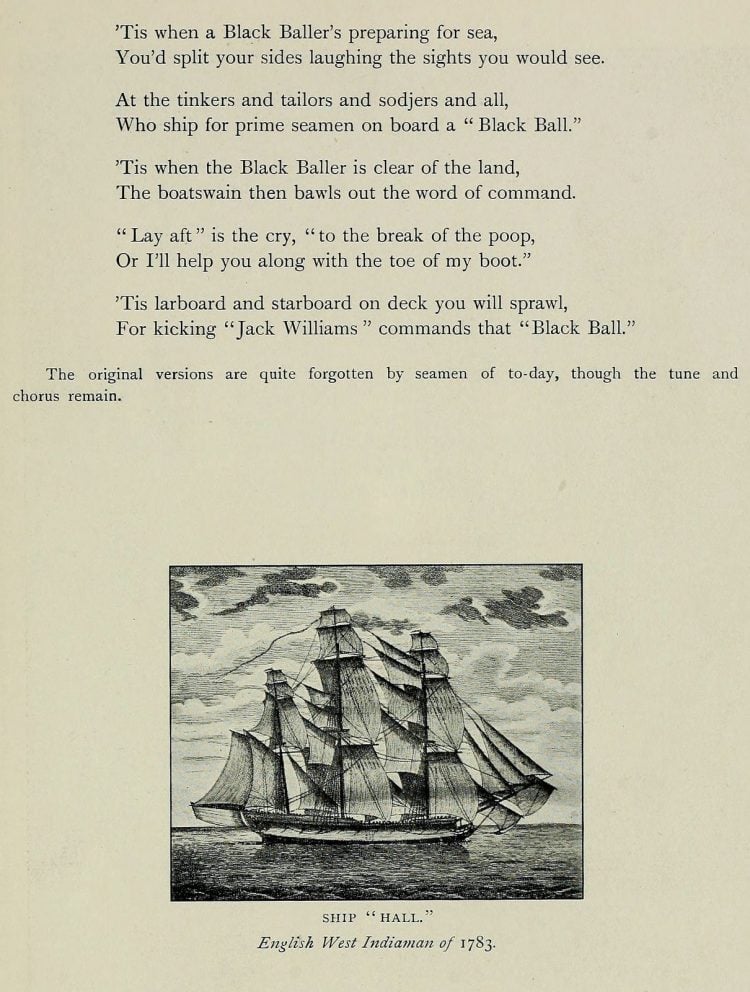 NOW SEE THIS: The unlikely history of Levi’s jeans – or, how clothing styles from 150 years ago are somehow still fashionable today 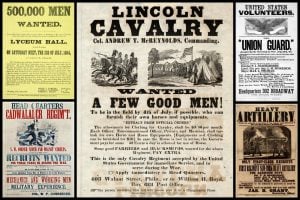 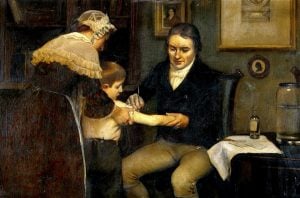