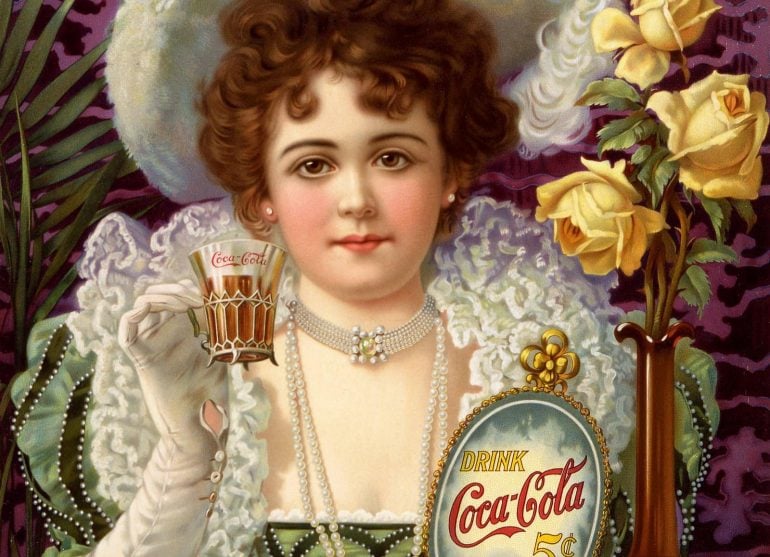 Originally marketed as a health drink when it debuted in the 1880s, Coca-Cola was said to cure everything from a migraine (aka “sick headache”) to physical exhaustion to depression.

No surprise it was so effective to help people pep up, because for its first 17 years of existence, Coca-Cola actually contained the other real coke.

But even without cocaine as an ingredient, Coke has managed to “addict” millions of beverage fans around the world. According to worldwide statistics from 2010, we drink an estimated 1.6 billion servings of Coca-Cola products every day. 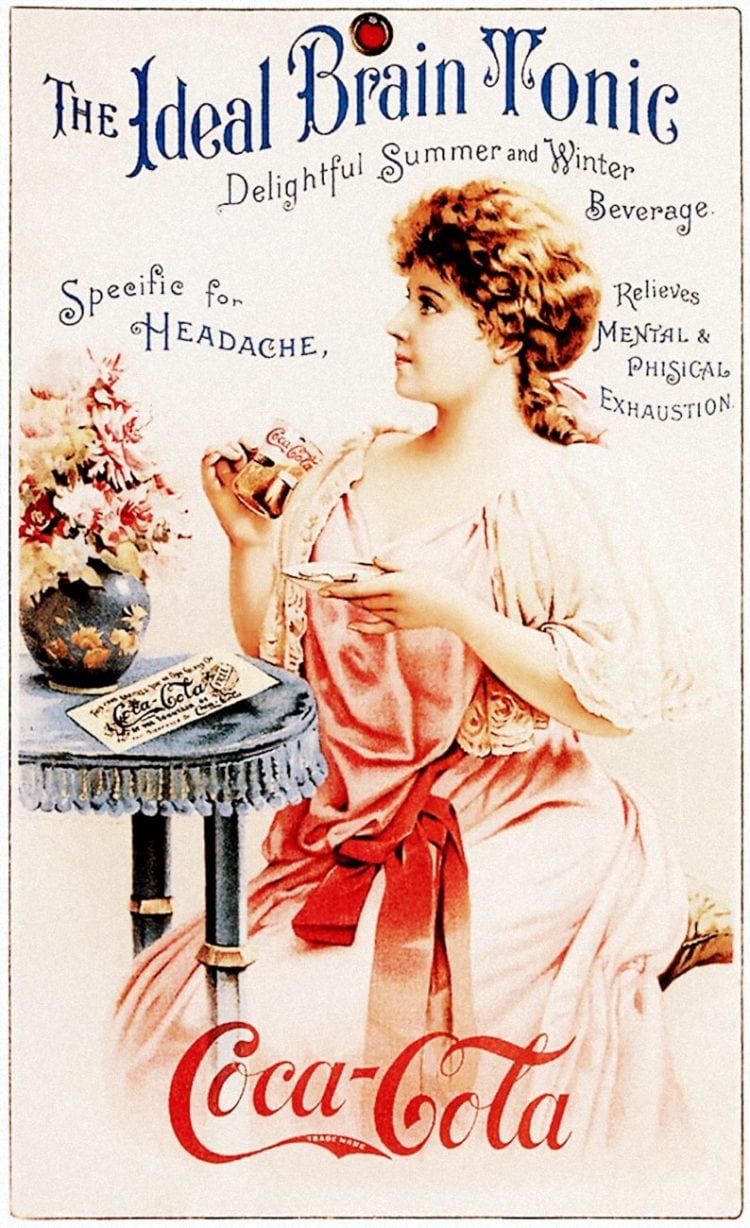 For Soda Water and other Carbonated Beverages.

This “Intellectual Beverage” and Temperance Drink contains the valuable Tonic and Nerve Stimulant properties of the Coca plant and cola (or Kola) nuts, and makes not only a delicious, exhilarating, refreshing and invigorating Beverage (dispensed from the soda water fountain or in other carbonated beverages), but a valuable Brain Tonic and cure for all nervous affections — Sick Head-Ache, Neuralgia, Hysteria, Melancholy, etc.

The peculiar flavor of COCA-COLA delights every palate; it is dispensed from the soda fountain in same manner as any of the fruit syrups. 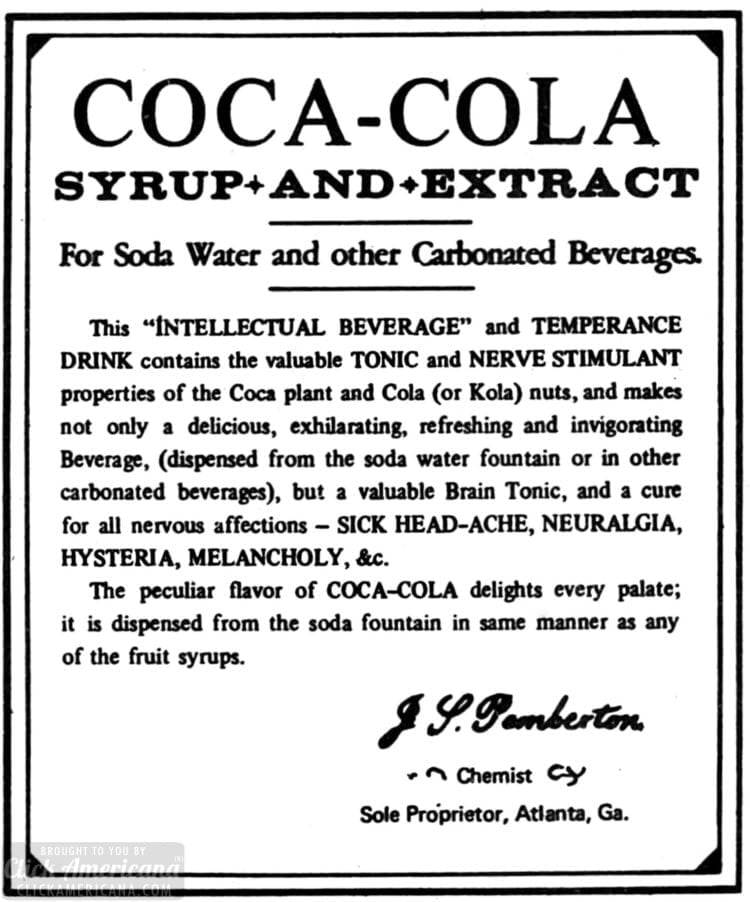 Raising the cocaine question in 1891: What’s in Coca-Cola?

As published in The Atlanta Constitution (Atlanta, Georgia) – June 12, 1891

A popular drink which is said to foster the cocaine habit

“I want to call your attention to a very vicious and pernicious thing which is going on in this and almost every other town,” said a thoughtful citizen yesterday.

“The drug stores and the soda fountains are selling enormous quantities of something they call “coca cola.” It is said to relieve nervousness, and ‘that tired feeling’ and all that sort of thing, and people are drinking it a dozen times a day. I am told by a physician that the ingredient which makes coca cola so popular is cocaine.

There is evidently enough of it in the drink to affect people and it is insidiously but surely getting thousands of people into the cocaine habit, which is ten times worse than alcoholism and as bad as the morphine habit. It is an awful drug and the victims of it are slaves. I have seen it!

And here the gentleman shuddered. “A friend of mine was a victim of it,” he continued, “and he killed himself before my eyes. He got so under the power of the cocaine habit that he saw he could not stop it, and he took a pistol and ended his life.

“I am confident that a chemical analysis of Coca-Cola would show the presence of cocaine. A physician tells me that is the ingredient which makes it popular, and it seems to me that it is a matter which the board of health ought to look into.” 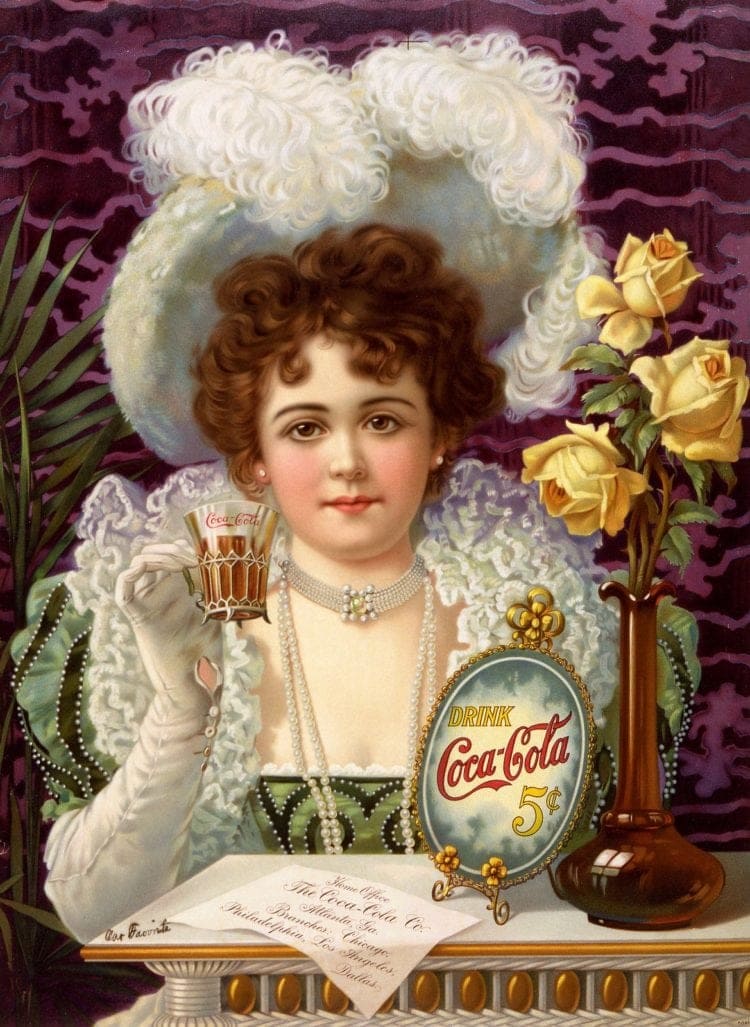 Rebuttal following the above letter: Coca-Cola said to be safe

Letter to the editor, as published in The Atlanta Constitution (Atlanta, Georgia) – June 13, 1891

There appears in the columns or your paper this morning a notice of “Coca-Cola,” a preparation which I have been manufacturing and selling largely in this and other communities, for the past three years, as a soda fountain beverage, to the principal dealers, who have dispensed it to the very best people in the community which they serve.

For nearly twenty years, I have lived in Atlanta and been known prominently as a druggist. Among the citizens of this place, I think I have a great many warm friends to whom I can refer for endorsement; that I have endeavored to live above reproach. never manifesting s desire to build up my own interests at the expense of theirs.

As to Coca-Cola, if your “thoughtful citizen” will find one person in all this country who is a cocaine user by reason of having drank Coca-Cola, then I plead guilty to their charges. In a pamphlet which I issue and distribute at much expense, I plainly state that among a great many other things which enter into its composition, we use coca leaves.

I have no objections to stating just here that one gallon of Coca-Cola syrup, which makes 128 glasses, as dispensed from the fountains, contains one-half ounce of green coca leaves, which are treated with hot water.

If your thoughtful citizen and prominent physician has got as much sense as they lack regard for correct speaking, they can readily see that a gallon of this syrup would not produce any decided effects attributable to cocaine.

Without any investigation as to who is using Coca-Cola, I feel confident that I can truthfully say that every prominent minister, a number of our most skilled physicians, together with nine-tenths of the businessmen, including all professions, are and have been for at least three years constant patrons of Coca-Cola.

Because a man once tries it and finds it to be a prompt restorer of his energies and goes back and gets it again and again should not be an argument against its use any more than against the recall of our family physician who restores to life and health the members of our family.

That some people use too much of it is not its fault or mine, but I have yet to hear of a single case having been injured thereby. The popularity of the beverage is caused as much by the judicious advertising that has been done for it as by its own genuine merits.

We trust that as you have doubtless carelessly permitted the attack to be made, you will as carefully insert this plain statement of my side of the case. 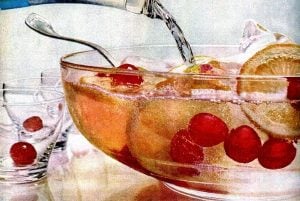 Vintage holiday punch and cocktail recipes from the 50s & 60s 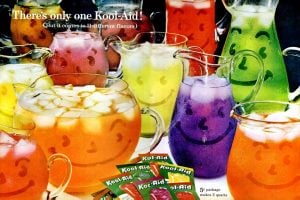 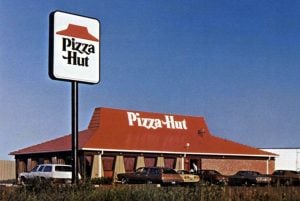