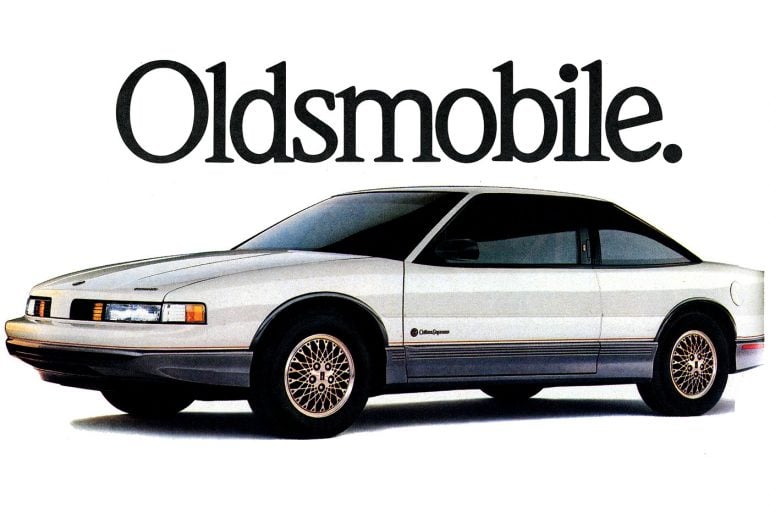 On a Cutlass Ciera, everything is built to last. Including the satisfaction. 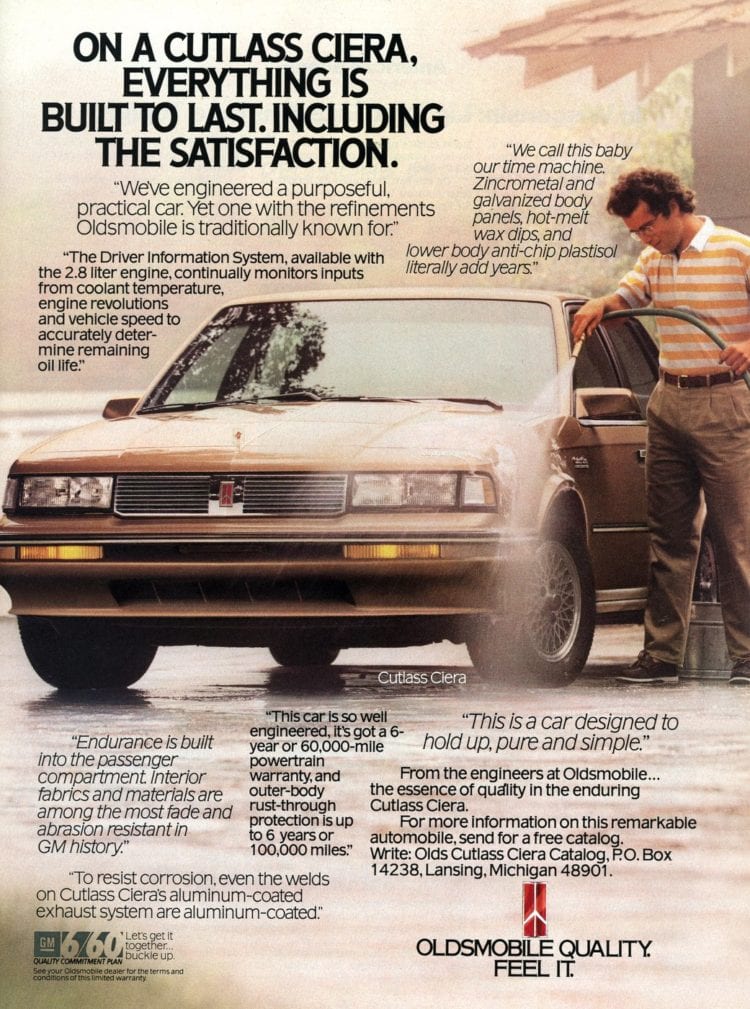 Think of it as a technologically-superb road car that just happens to seat 6.

“This car is engineered from the inside out. It seems incredible, but the interior room is almost identical to what it was ten years ago.” 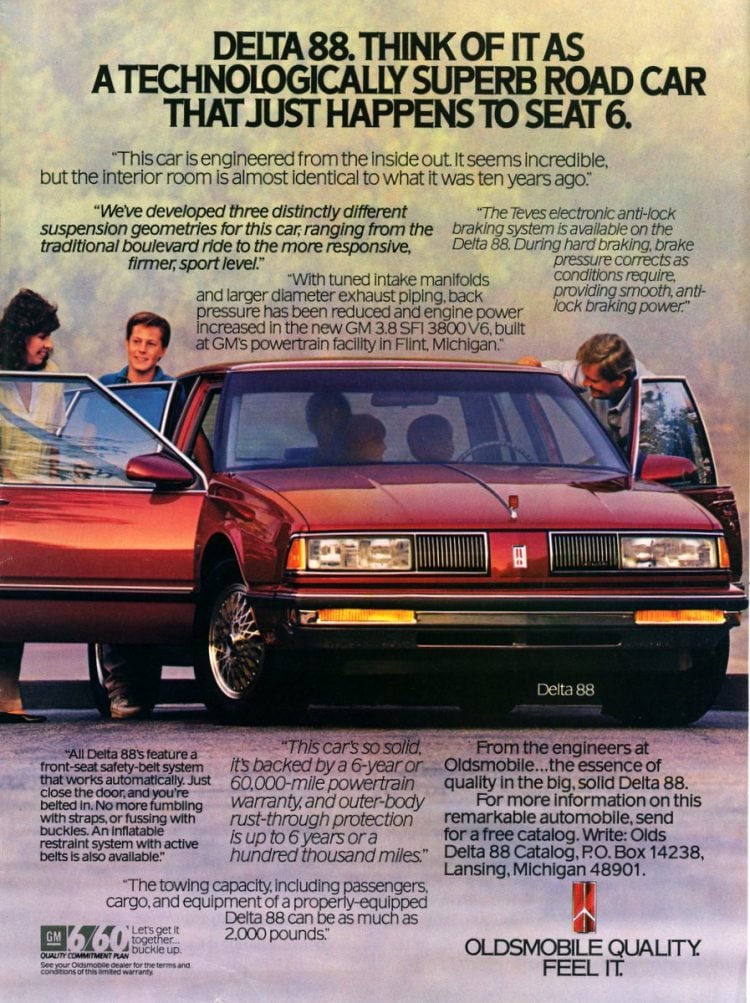 Today, you need more than style. You need substance. That’s why we gave the 1987 Delta 88 Coupe the power of a 3.8 liter fuel-injected engine. 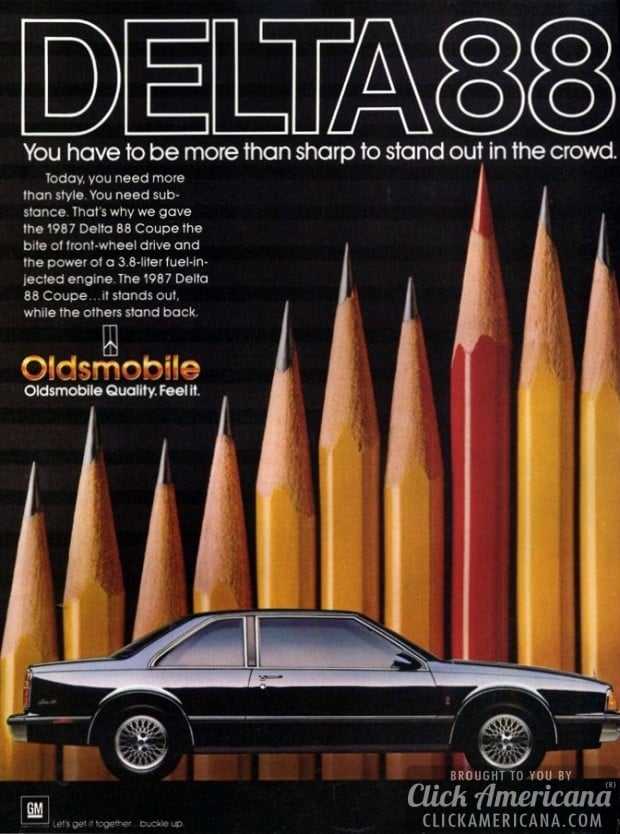 ALSO SEE
Buick Century: Most popular Buick on the road (1988) 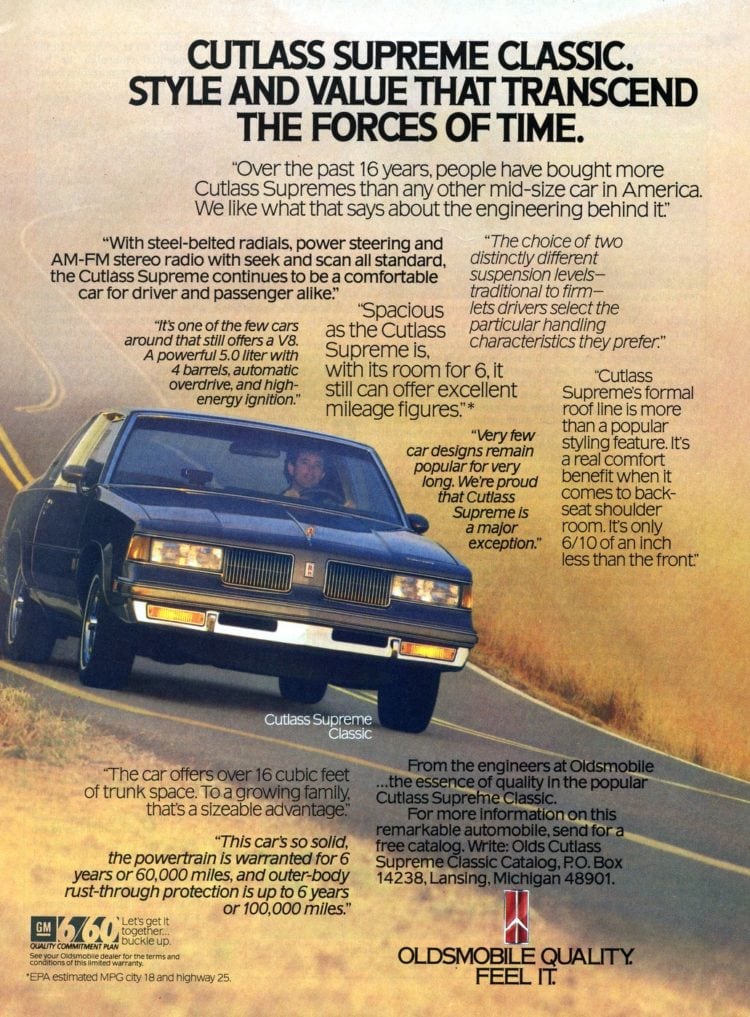 This is one car you may well want to examine from underneath, flat on your back on a mechanic’s creeper. And we welcome such a critique.

The first thing you’ll notice is that each wheel has its very own suspension system. With each system being totally isolated from the car body. Cornering is remarkable, with controlled heel and sway. At legal speeds, the way it handles is almost illegal.

Inside is like no Oldsmobile you’ve ever sat in. The ergonomic experts extended even themselves. Each seating area is genuine leather. Both front buckets adjust not only for comfort, but also for front, side and lumbar support. Every bend of your seated body will be braced for all motoring conditions.

And the driver’s view is magnificent. Genuine Burl Walnut frames the car’s instrumentation and information center. Here, computer signals are translated by constant monitoring of the behavior of nearly every moving part.

A Teves electronic anti-lock braking system features a sensor at each wheel that monitors speed and feeds the data to a microprocessor. In a panic situation, brake pressure corrects up to 15 times per second, providing smooth, anti-lock braking power.

The engine is a 3.8-liter V6 with Bosch sequential port fuel injection. Electronic sensors on camshaft and crankshaft determine the exact timing of fuel input, and the engine’s Electronic Contro! Module determines the precise amount for optimum performance.

Each car is individually inspected and test driven upon completion to assure you the Touring Sedan is the essence of Oldsmobile quality. A certificate personally signed by the final inspector is delivered with each car. Further assurance is evidenced by anew 6-year/60,000-mile power- train warranty and 6-year/100,000-mile rust-through protection warranty. See your Oldsmobile dealer for the terms and conditions of this new limited warranty.

lf you desire more information on this remarkable new automobile, we’ll send you a free catalog. Or visit your local Olds dealer and request a test drive. The limited edition Touring Sedan is Oldsmobile Quality in its most magnificent form. 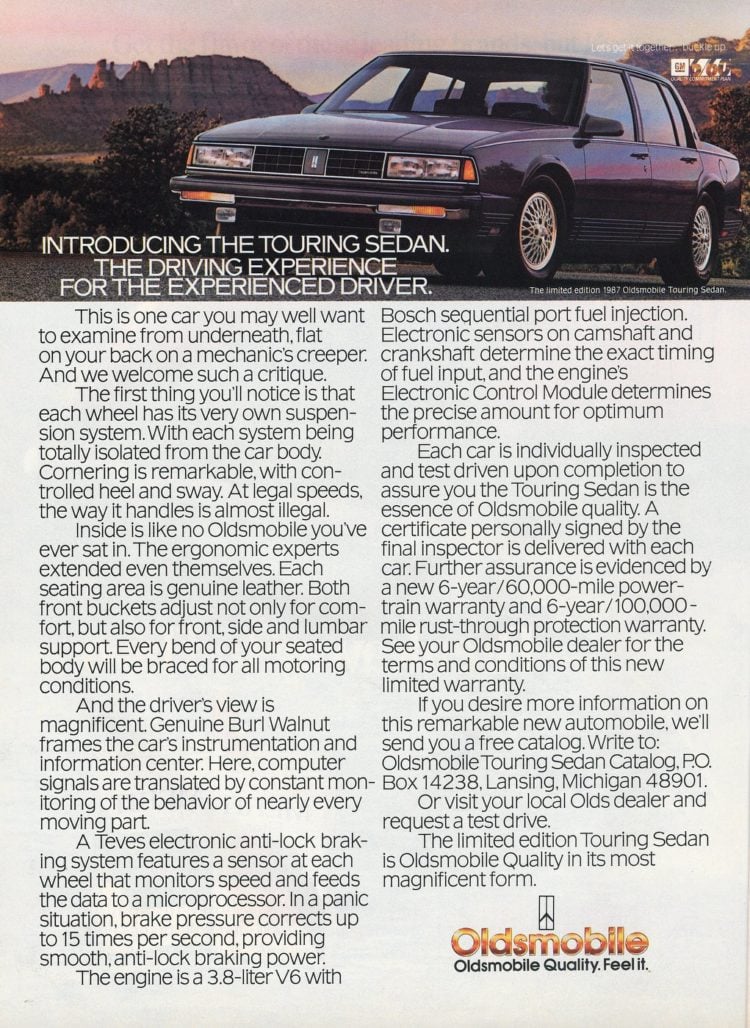 Ordinarily, we wouldn’t make such a bold prediction. But then, the 1989 Oldsmobile Cutlass Supreme is anything but ordinary.

It is the product of five years of engineering and design, the net result of over a million miles of testing. In the purest sense of the word, the new Cutlass Supreme is truly a totally new Oldsmobile. Just look at it. the sleek lines. The smooth shape. Styling that is destined to become the standard of a new generation. But advanced styling isn’t the only reason the Cutlass Supreme is ahead of its time… 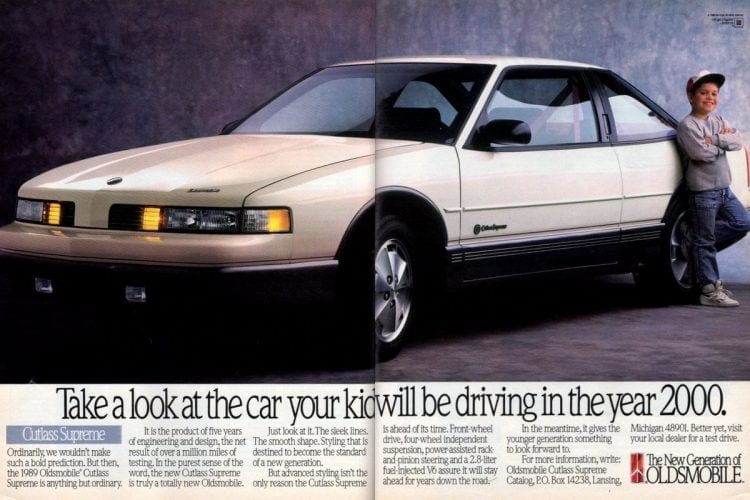 1989 Cutlass Supreme: This is not your father’s Oldsmobile

Don’t go looking for this Oldsmobile in any family album. Road & Track would be a lot more likely.

Because this Oldsmobile is the totally new Cutlass Supreme. So new, its past is just beginning.

Its most noticeable change you’ve probably already noticed. The way your neighbors will when they see its new aerodynamic shape. But this sleek new styling standard is much, much more than merely a pretty face.

The inclusion of four-wheel independent suspension, front-wheel drive, four-wheel disc brakes, and a 2.8-liter multiport fuel-injected V6 is rare outside the world’s most technologically advanced automobiles. 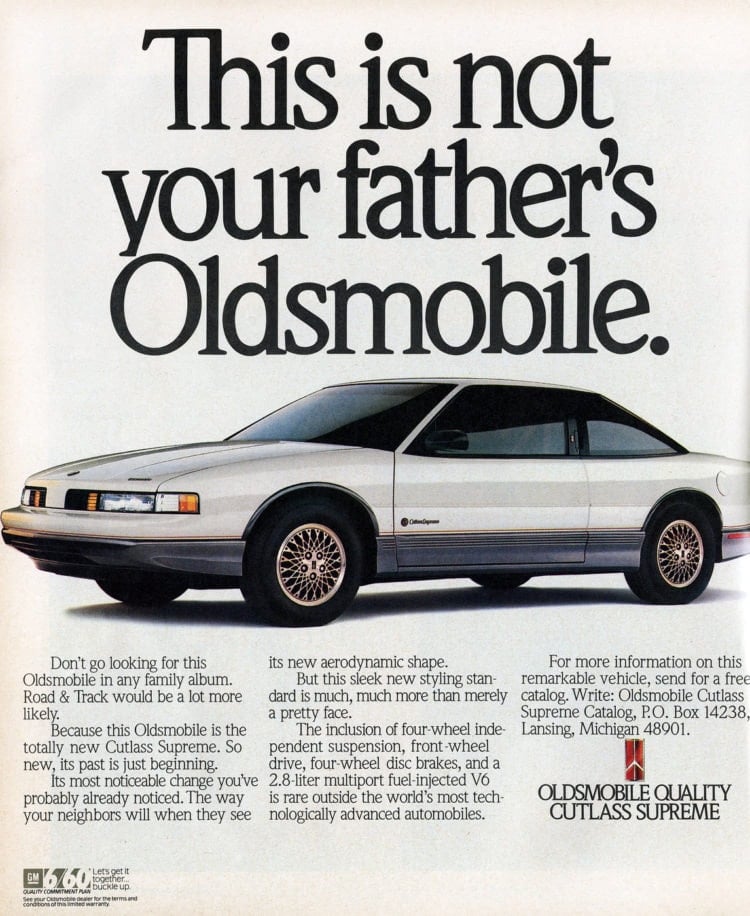 1989 Oldsmobile Cutlass Calais: 35 miles per gallon can be fun

To a lot of people, fuel economy has become something of a four-letter word. As in drab. And boxy. And dull.

Fortunately, this group never included the designers of the new Cutlass Calais? As you can readily see, the only thing this sporty performer economizes on is gasoline.

As you can so readily see, the Calais’ technological array is equally attractive. Front-wheel drive, MacPherson strut suspension, and five on the floor make driving a real joy… 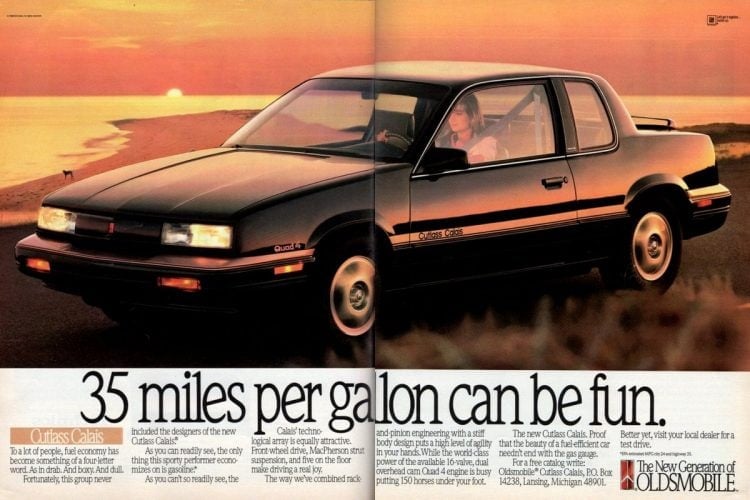 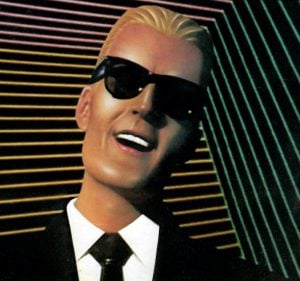 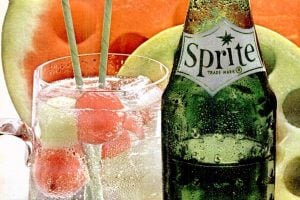 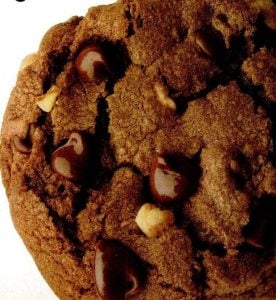 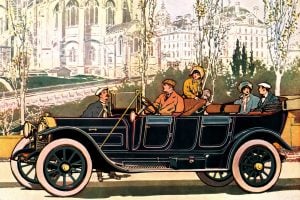 See the top automobiles for 1911