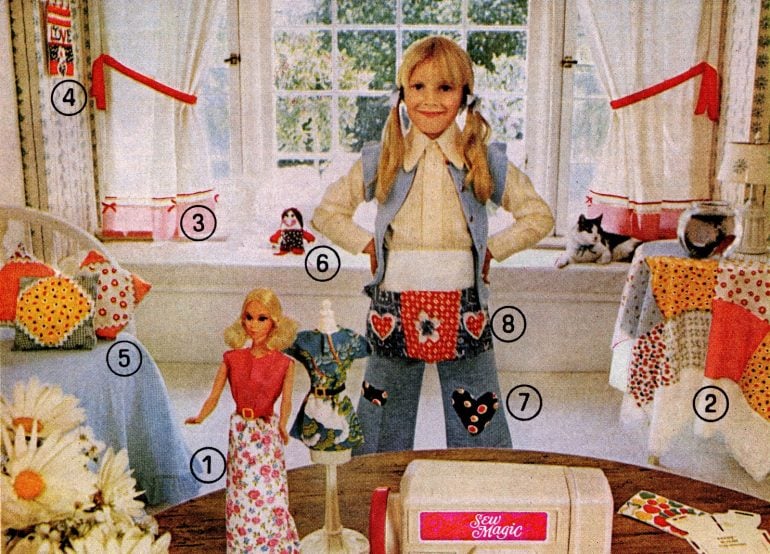 (These are also some of the many ads from the seventies reminding girls that “their” toys were most often related to cooking, cleaning, sewing, and mothering.)

NO-NEEDLE SEWING — Mattel, the world’s largest manufacturer of female garments (they make anywhere from 10 to 20 million outfits a year for Barbie), has entered the home sewing field.

At the Home Silk Shop, Mattel recently staged a world premiere of Sew Magic, a children’s sewing machine which operates without a needle and thread.

About 15 persons gathered to watch two little girls, supervised by their mothers, successfully demonstrate the machines.

The machine, made of white and shocking pink plastic. uses a nontoxic glue to bond fabrics together and is said to be safe and operable by children as young as 5.

Priced at $9.95, it comes in a Barbie Fashion Set, which includes patterns for Barbie clothes, a Barbie dress form, and nonflammable fabrics.

According to a Mattel spokesman, there are no plans to add patterns for Mattel’s Ken doll, Barbie’s plastic boyfriend.

“Sew Magic came about because of our awareness of the growing interest in people doing things with their hands,” the spokesman said.

“We think it’ll get a couple of million little girls into home sewing a couple of years before they would otherwise, and places like Home Silk may be cultivating a whole new generation of home sewers.”

ALSO FIND OUT: Who invented the sewing machine? (1909) 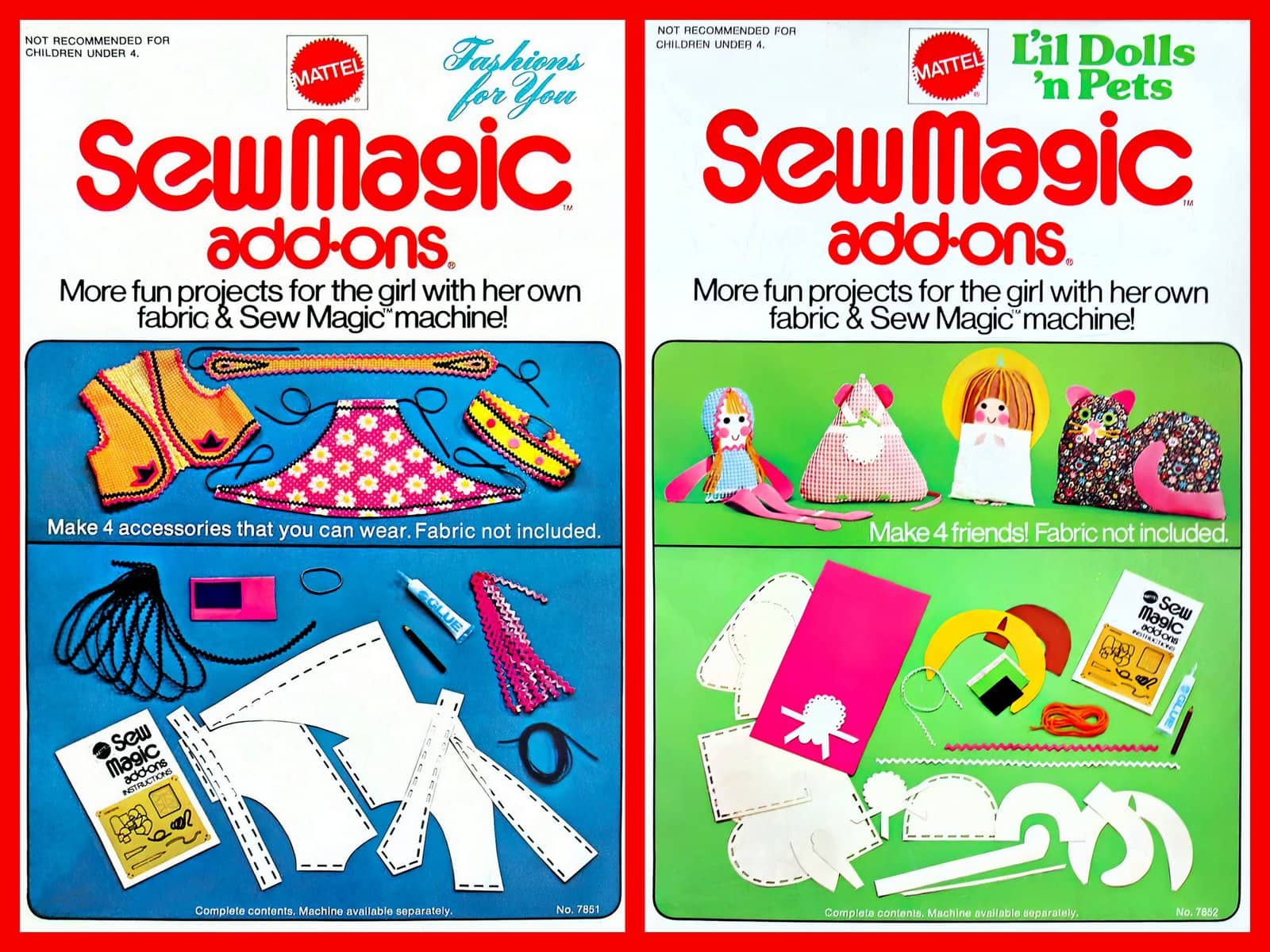 Introducing Sew Magic… real sewing without needle and thread. Now your little girl can sew and create just about anything she dreams up.

From Barbie costumes to stuffed rag dolls to bright, silly hand puppets. From practical things to nutty creations. All by herself. In just minutes.

With new Sew Magic, she can start right off, making all kinds of things. There’s no needle to thread or to prick small fingers. Instead, the Sew Magic Machine sews with “Miracle Stitch.”

It’s an amazing new liquid bonding process that lets a youngster sew many of the things she might sew on a grown-up machine, but without danger and frustration.

“Miracle Stitch” dries quickly, and because there’s no thread to pull out, whatever your child sews will hold tight.

And with some scraps of cloth and some imagination, there’s no limit to what she can do.

ALSO SEE: Who is Suzy Homemaker? See the vintage toy sets that started it all

The new Sew Magic is at toy stores now. Why don’t you go have a look at it.

You’ll like the price. And we promise it’ll give your little girl a lot more than just a few new Barbie outfits. It’ll give her a love of sewing that can last her a lifetime. And that’s something we’re pretty proud to help you give her. 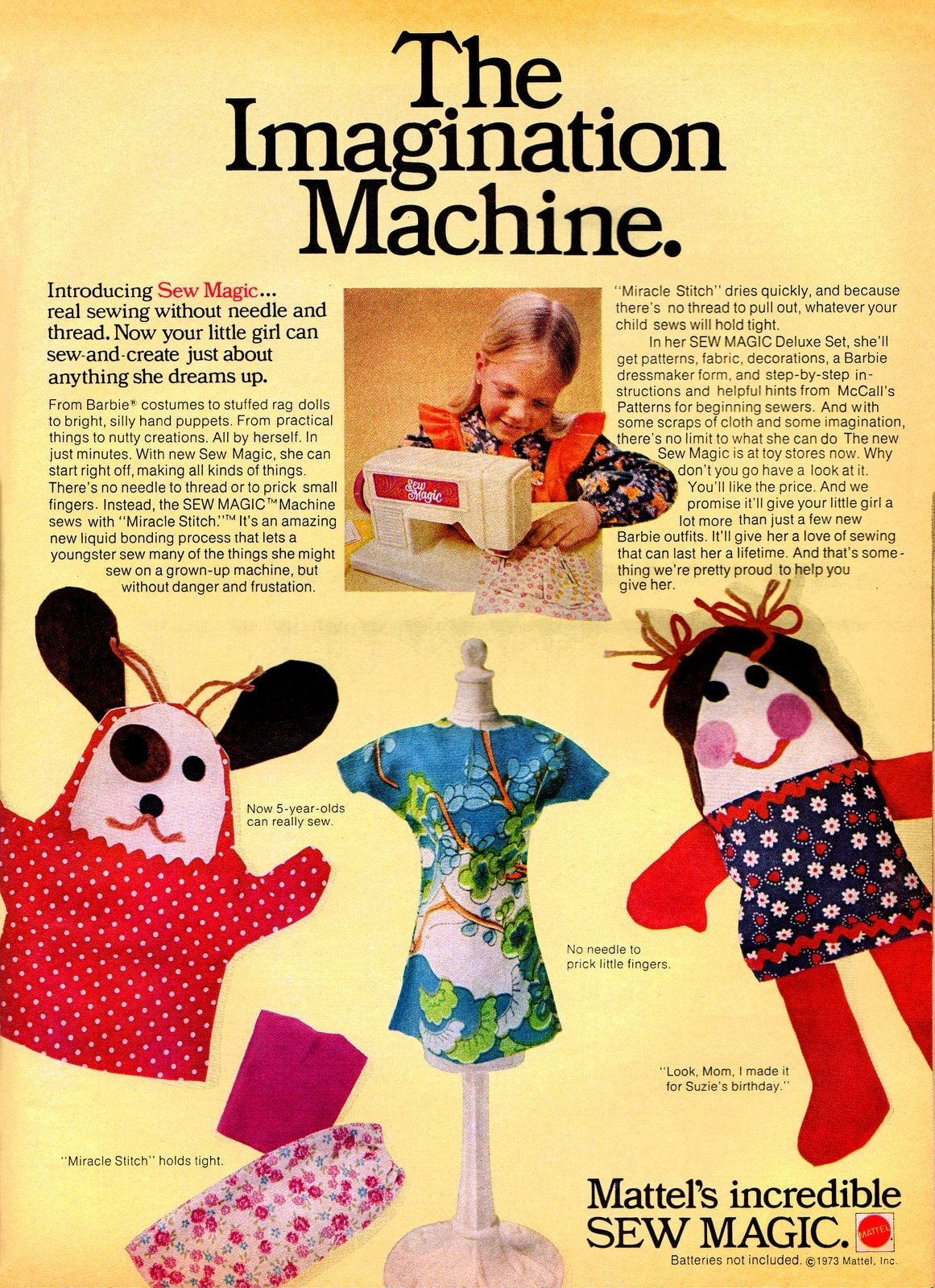 We call it Sew Magic, and it’s the most remarkable sewing machine ever invented for children.

It makes real, grown-up seams. But it does it without needle and thread. It sews with Miracle Stitch, a hold-tight bonding process that makes sewing so simple and safe even a 5-year-old can now make just about anything she can dream up.

To go with it, you can also buy some new cordless electric scissors and a Carry Case. And Sew Magic comes complete with fabrics, re-usable patterns, trims, instructions.

Add a little girl’s imagination (and some old scraps if she gets really industrious!) and she can:

And on. And on. Making all kinds of dreams. Some useful. Some silly. All fun. And all with seams that last. We’re just sorry we didn’t think of it when you were her age. 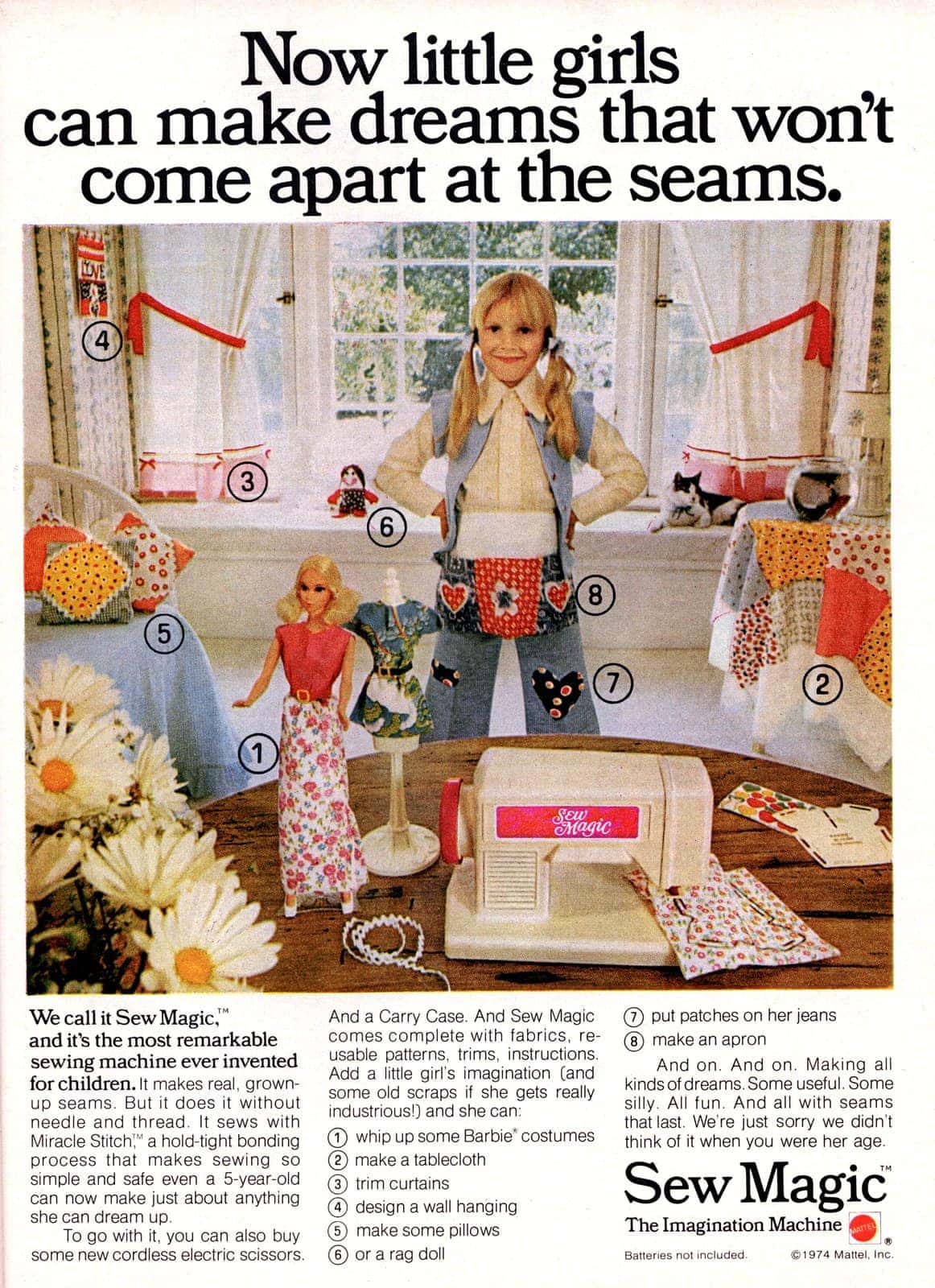 Introducing the first sewing machine you don’t have to thread. (1977)

There’s never been a sewing machine for little girls like Sew Perfect. Because there’s no needle to thread. There’s a needle and thread cassette instead. (Designed for safety, because that’s very important.)

Real stitches for real sewing. Sew Perfect is a real sewing machine because it sews real chain stitches. Stitches that won’t pull apart or come out easily. So when your little someone sews a little something on Sew Perfect, she’s really sewing.

A special trimmer sews pretty trim. You know how trim can do wonderful things for almost anything. We know so, too. Which is why Sew Perfect comes with a self-feeding roll of trim that fits right into the cassette. And makes sewing trim so easy.

Simply snap it in and it’s ready to sew. Which helps make sewing so easy. And the needle is enclosed in the cassette. Which helps protect little fingers. So, of course, it’s perfect for little girls.

Sew Perfect comes with five patterns to sew a scarf, a halter, a bag, a pillowcase, a wall hanging or an apron. The only things your little girl needs from you is fabric, batteries and notions.

Except, of course, when she needs more Simplicity’ patterns. And more needle and thread cassettes. To make more terrific things. You can get them wherever you get Sew Perfect. And you can get Sew Perfect in most toy stores. 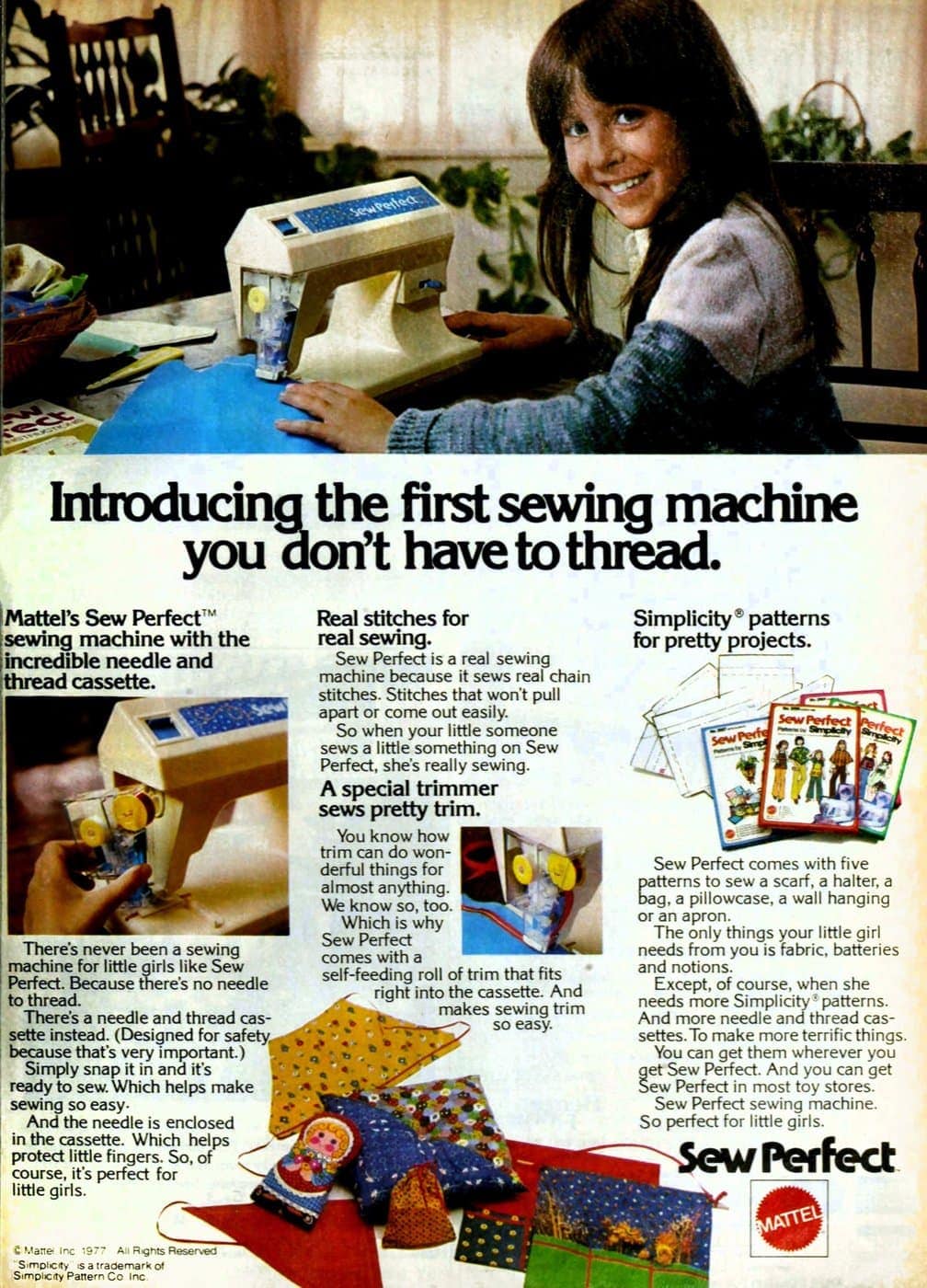 NOW SEE THIS: Vintage Toys R Us catalog of Christmas gifts: ’80s Out of this World Toy Book (1986)