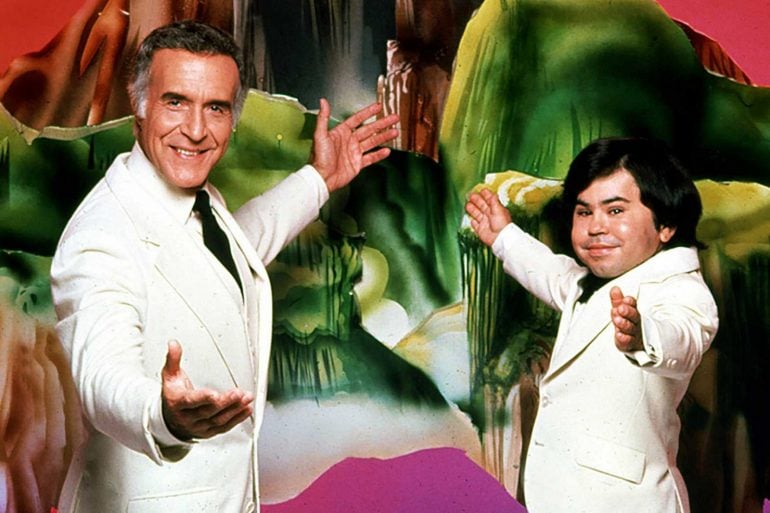 Airing for seven seasons on ABC, from 1977 through 1984, “Fantasy Island” featured Ricardo Montalban as the mysterious Mr Roarke, the overseer of a mystical island in the South Pacific where people could come and live out their fantasies — whatever they may be. 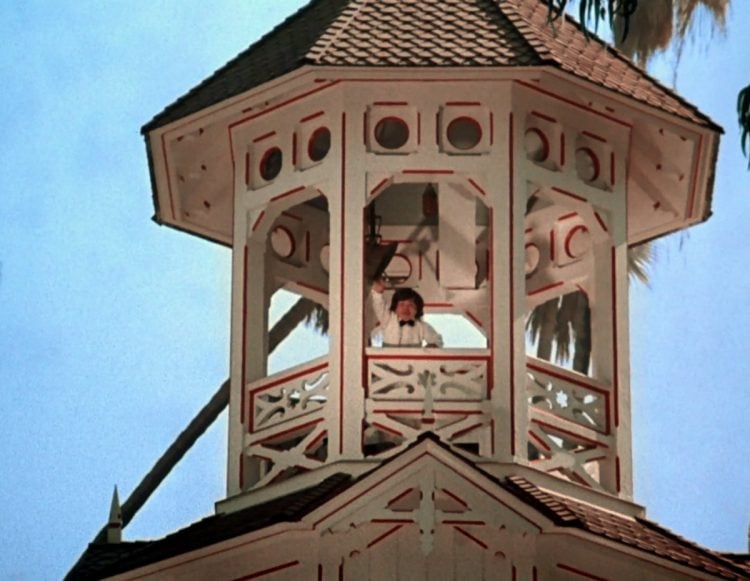 “Fantasy Island” was also well known for its long list of illustrious guest stars, which reads like a Who’s Who of Hollywood. (If you were working in the business during those seven years, Fantasy Island was apparently the place to be seen.)

And now… smiles, everyone! Smiles! 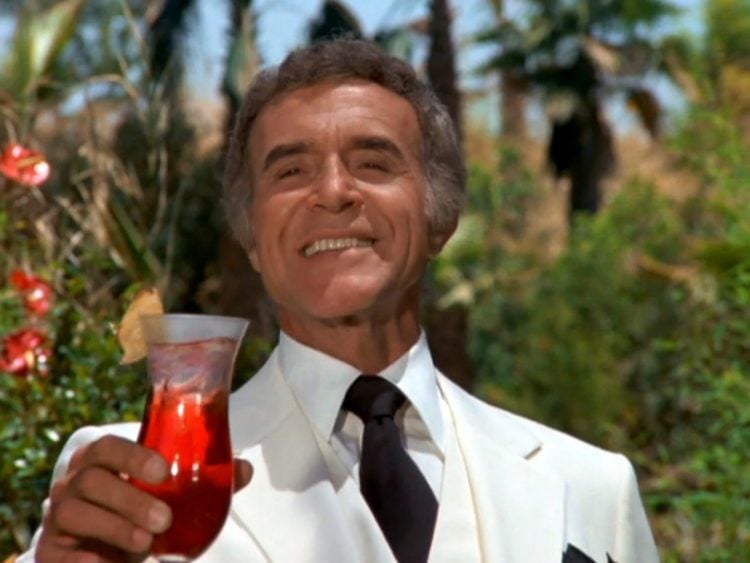 Remember how neat it was as a child to believe that wishes could come true? Ricardo Montalban’s new series, “Fantasy Island,” allows adults the chance to resurrect that belief. The new series, which debuts Jan. 28 on ABC, most likely will be as suave and sophisticated as the pitch Montalban gives for a major automobile maker.

If you saw either “Fantasy Island” or last night’s “Return to Fantasy Island,” you know the idea behind the series. Roarke (Montalban) runs a tropical island resort where visitors — for a fee — are allowed to live out their fantasies. 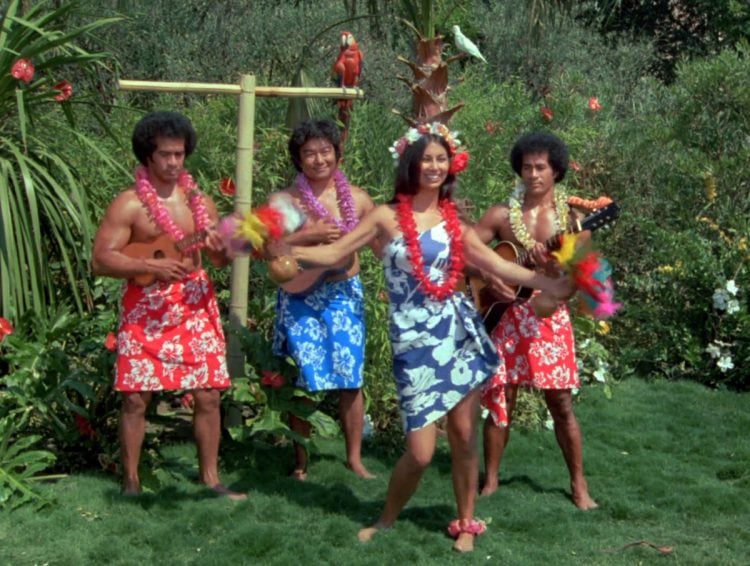 In last night’s film, there was a trio of stories. A cosmetic tycoon (Adrienne Barbeau) and her secretary (George Maharis) were taken to the other side of the island for a romantic weekend — his fantasy, not hers.

A childless couple (Joseph Campanella and Pat Crowley), who had been forced a dozen years earlier to adopt out their daughter, were given the opportunity to meet her — but not tell her they were her real parents. And a distraught husband (Horst Bucholz), in the hope that it would trigger a cure, was able to re-live the traumatic time that resulted in his wife’s (Karen Valentine) mental collapse.

But there were little twists and turns to each of the plots. The cosmetic tycoon was captured by a hulking weirdo who eventually turned out to be Roarke. The childless couple met three little girls instead of the one they expected. And the distraught husband discovered what was really behind his wife’s distress —and why.

A cynic would probably label “Fantasy Island” a sort of “Love Boat” in dry dock. But, unlike that series, “Fantasy Island’s” stories don’t all focus on love and how to keep it.

In the earlier film, Hugh O’Brian played a big game hunter who became the hunted. Bill Bixby recaptured that poignant moment during World War II when he fell in love with a French dancer — and killed her. And Eleanor Parker, as a wealthy woman who took the disguise of a homely maid, discovered who was really hoping for her demise. 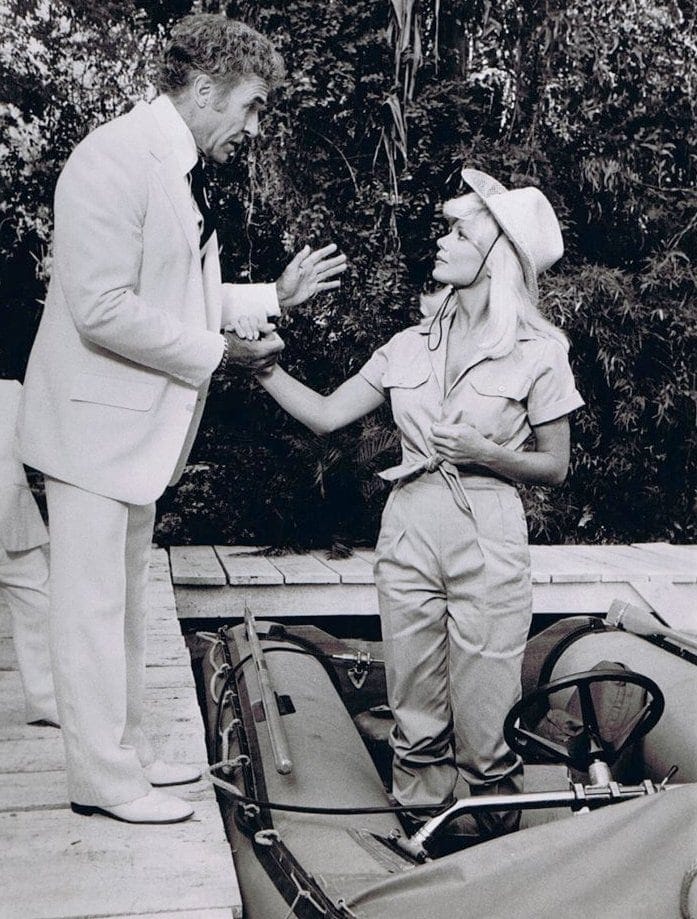 Some of the dialogue is unexpected, too. During one exchange between Tattoo (Herve Villechaize), Roarke’s assistant, and Bucholz’s character, Tattoo was asked, “Just who is this Mr. Roarke?” With his eyes glancing skyward and his hands clasped as in prayer, Tattoo answered, “Some people call him…” Then, with his eyes cast downward, he countered, “Some people call him…” “But what do you call him?” insisted Bucholz’s character.

“Mr. Roarke,” replied Tattoo. But probably the most appealing thing about “Fantasy Island” is that it allows viewers the chance to escape and indulge themselves in a little wishful thinking. Few of us are able to take tropical vacations or — at this stage of winter — even remember what it feels like to walk in the sunshine.

And if “Fantasy Island” continues a practice that has been evident in the first two episodes, stars like Sandra Dee, George Chakiris, Laraine Day, Joseph Cotten and Cameron Mitchell will have the opportunity to walk not only in the sunshine, but in the limelight again. 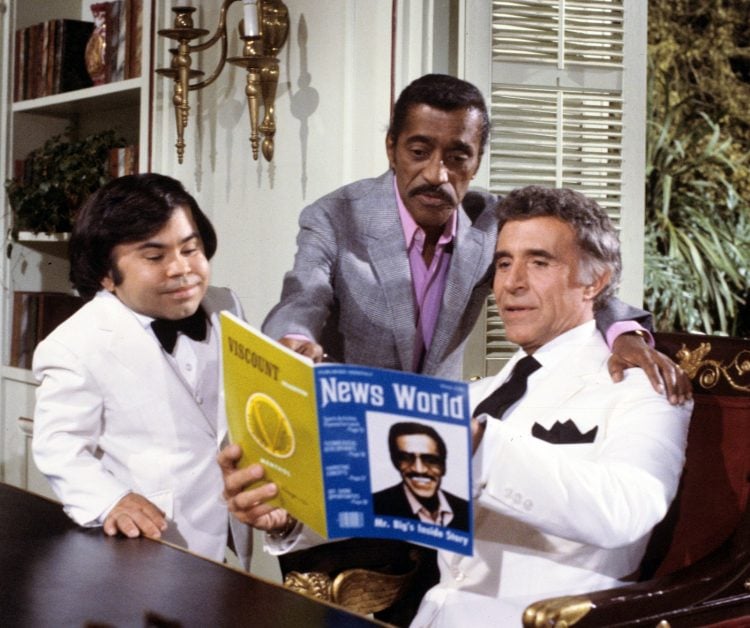 The rise and fall of ‘Fantasy Island’

By David Bianculli – The Philadelphia Inquirer (Pennsylvania) May 25, 1984

There has been no tearful finale, no star-studded farewell, no conciliatory return of Tattoo. Sometime this summer, ABC’s “Fantasy Island” will simply and quietly disappear, sinking into oblivion, like a TV version of Atlantis.

“Fantasy Island” is into repeats now, and will show no new episodes before being replaced by “Finder of Lost Loves,” another glossy anthology series from producer Aaron Spelling. “Love Boat” and “Fantasy Island,” two Spelling co-productions, have ruled Saturday nights for years, for reasons not easily comprehended. 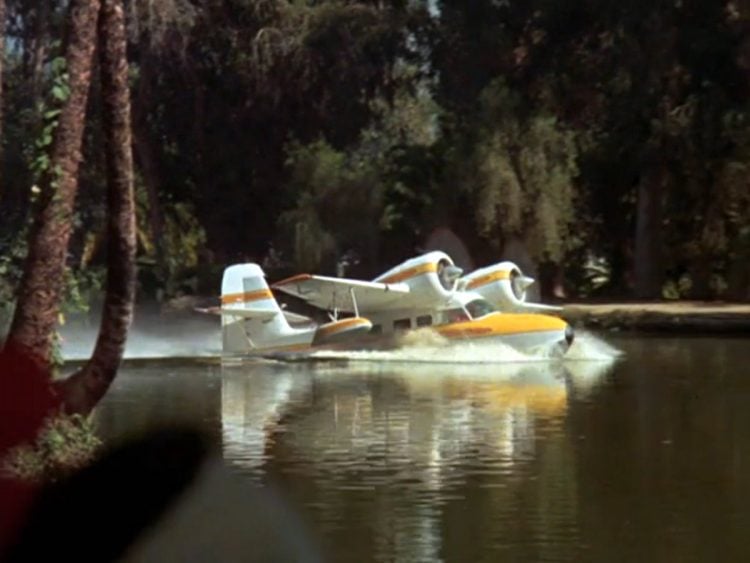 The concept behind “Fantasy Island,” that you can visit a place and make your dreams come true, is wonderful — but not for television. For an audience to enjoy most forms of fictional entertainment, there must be a “willing suspension of disbelief.” To believe in TV’s “Fantasy Island,” there must also be a willing disregard for human nature.

The first Fantasy Island TV movie was presented in January 1977, a week before “Roots.” It featured Ricardo Montalban as Roarke, a man who charged visitors $50,000 for a weekend of fantasy fulfillment.

Typical of the adventurers was Hugh O’Brien, playing a hunter who wanted to hunt the most dangerous game. People who had never read “The Most Dangerous Game” by Richard Connell or seen its plot ripped off by countless movies and TV shows might have been shocked to learn that O’Brien’s quarry was a human being — but O’Brien would have had a much tougher challenge if he had tried to find someone who didn’t know the setup from the very first scene. 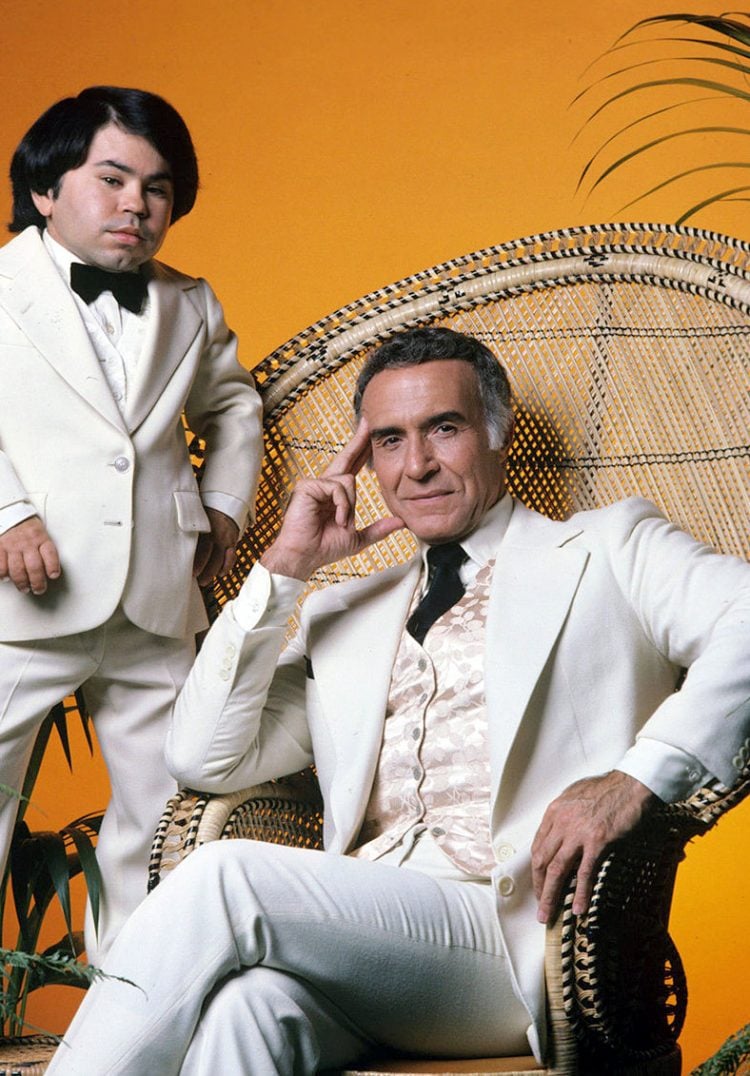 The pattern established by that first Fantasy Island TV movie was copied by Return to Fantasy Island in January 1978, and by the weekly series that began immediately thereafter. Tattoo, played by Herve Villechaize, was in both movies (“De plane, boss, de plane!”), greeting the arrivals. Each guest would confess his or her deepest wish to the white-suited Roarke, and the fantasy would begin.

When “Fantasy island” became a series, Roarke gained a “Mr,” and the $50,000 admission fee was dropped. Otherwise, things proceeded pretty much the same, with each week’s storylines being adapted (TV’s polite term for “stolen”) from every imaginable, but unimaginative, source.

A woman wants to become a sex symbol, so she does — and is promptly kidnapped, allowing the writers to engage in a watered-down version of The Fan Club. Earlier this year, a black man’s greatest wish is to dance alongside Bill “Bojangles” Robinson, which demonstrates how little reality creeps into “Fantasy Island.” On a show where minority guest stars appear infrequently, no one thought to question the wisdom of writing a subplot in which a black man’s most fervent desire was to tap-dance. 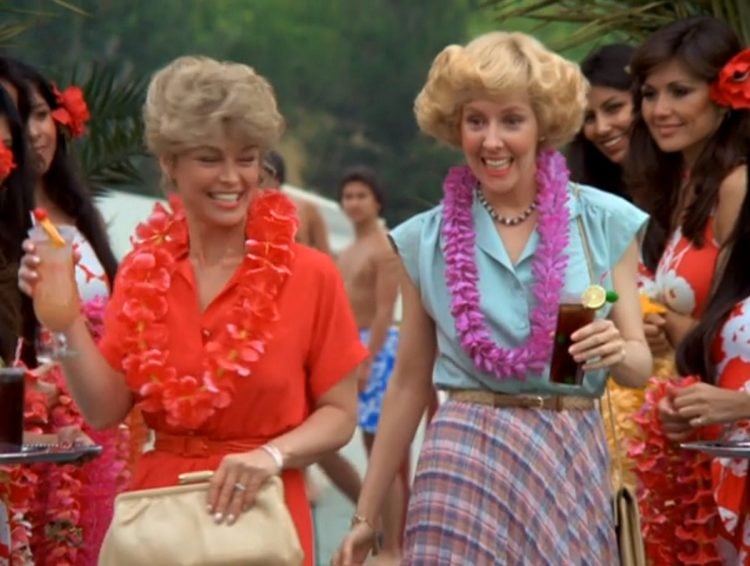 But then, “Fantasy Island” never held up well to inspection. Most people who visited a real “Fantasy Island,” especially at $25,000 a day, would go there either to make love or kill; sex and violence would be the big draws, and undoubtedly in that order.

Quite often, “Fantasy Island” flirted with the sexual angle, but always with a moral lesson nipping at its heels. If a man wanted to spend the weekend on an island of beautiful women, he did — but they were always killer Amazons or female headhunters or nuns. But “Fantasy Island” had to have something to keep it going for seven years.

The quality of the guest stars? No. Anyone with a union card found work on “Fantasy Island,” whether their careers were waxing, waning or washed up. The cleverness of the writing? No way. In its last two seasons, the writers began copying one another, leading to a dizzying kind of deja vu as different actors jumped through the same hoops. The concept? Perhaps, but cable television’s Playboy Channel could take a more universal, worldly approach.

So what could it be? And why, after years of popularity, did “Fantasy Island” suddenly plummet to its death this season? Sherlock Holmes said in “The Sign of the Four” that “When you have eliminated the impossible, whatever remains, however improbable, must be the truth.”

Therefore, the key to the success, and eventual failure, of “Fantasy Island,” has to be Tattoo. When Villechaize was replaced by Christopher Hewett, “Fantasy Island” began to sink. It’s Tattoo bad he didn’t leave a few years earlier. 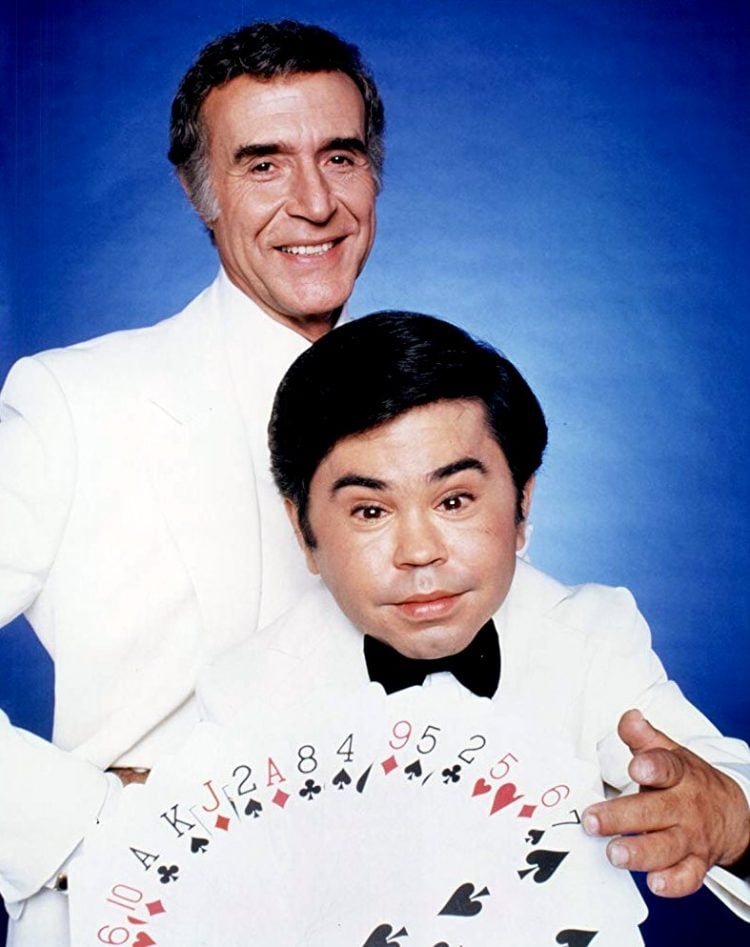