Disney’s Cinderella: The animated movie that became an instant classic in 1950 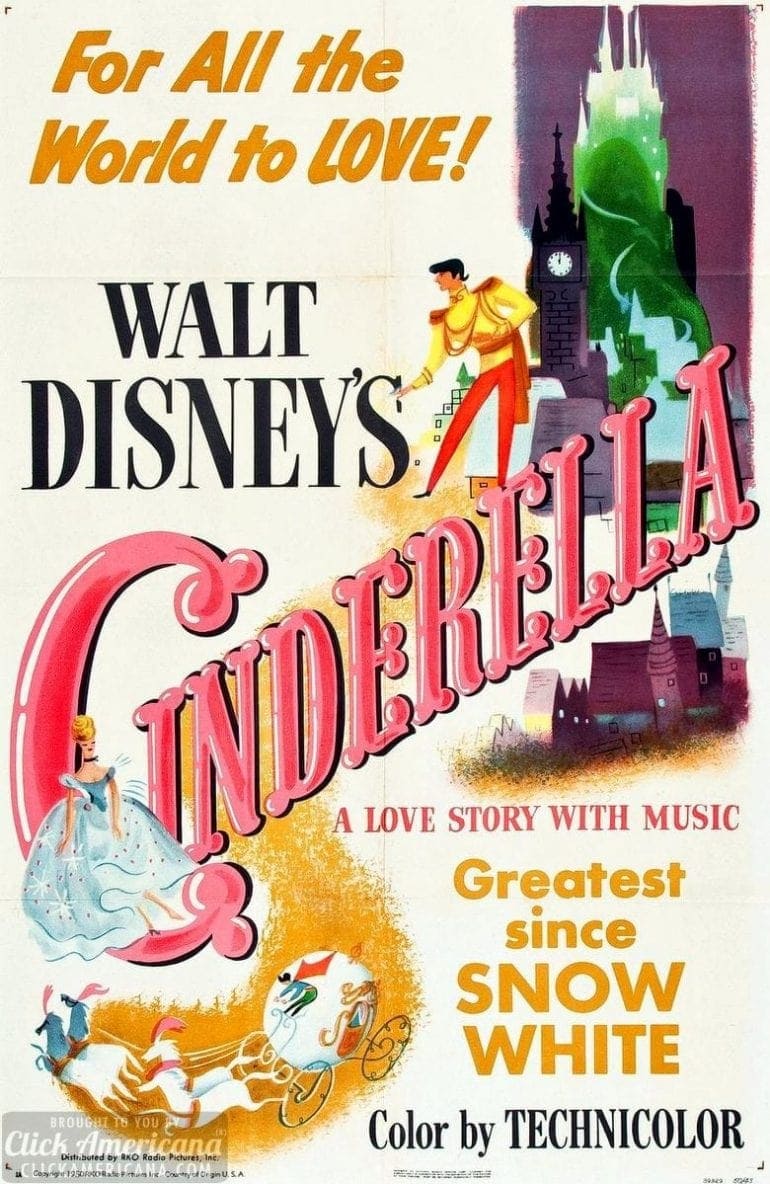 Walt Disney’s ready to spring his latest full-length cartoon, “Cinderella,” on the world. And the face-lifting Cinderella got in Hollywood may have the original author rattling in his grave.

Disney confessed Tuesday he’s modernized the fairy tale with everything from sex to slapstick to songs.

The sweet fairy godmother turns out to be a fluttery, middle-aged Burke type. There’s a cat who’s a villain, and a handsome prince who plants torrid kisses that the French author of Cinderella, Charles Perrault, never had in mind. 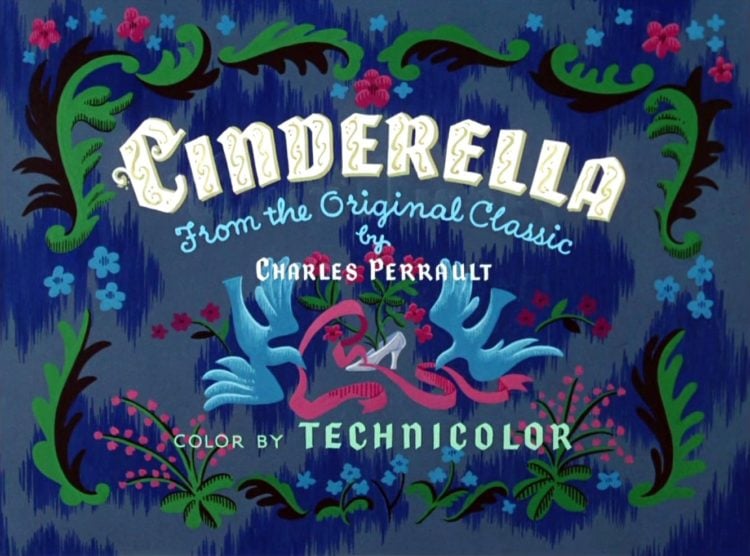 “I’ve been working on the movie for six years,” says Disney. “There have been many versions of the Cinderella story. I thought the usual Grimm tale was too sweet, so I followed the Perrault original.

“But the story is only an outline. I had to fill it in and bring it more up-to-date.”

“For example, there’s no reason in the fairytale why the prince suddenly gave the bail. We have his father, the king, lonely and wanting his son to marry. He gives a party to get all the prospective brides together.”

The fairy tale was penned 300 years ago. Disney placed his story in the mid-19th century because “that was a romantic period.” But Cinderella goes to the ball in a fancy gown that any modern movie queen would wear today. “That’s to appeal to the modern teenagers,” says Disney.

Cinderella has some cinema pals she didn’t have in the fairytale, too — a nasty cat and playful mice. They’re the comics. And Disney made the fairy godmother a “likable, forgetful character.”

“She’s a little, pudgy, old lady who never can remember where she put her wand,” he smiles. “She even forgets temporarily to change Cinderella’s rags into that beautiful dress.”

“The conventional fairy godmother was kind of dull.”

Disney’s Prince Charming is handsome and dashing. But his role was trimmed because good-looking men are not easy cartoon characters to create, Disney adds.

There’s one change from the French story nobody will notice: Perrault’s Cinderella slipper was made of fur. Disney made it glass, as it is in later, more popular translations. He doesn’t think anybody will notice the other switches, either. 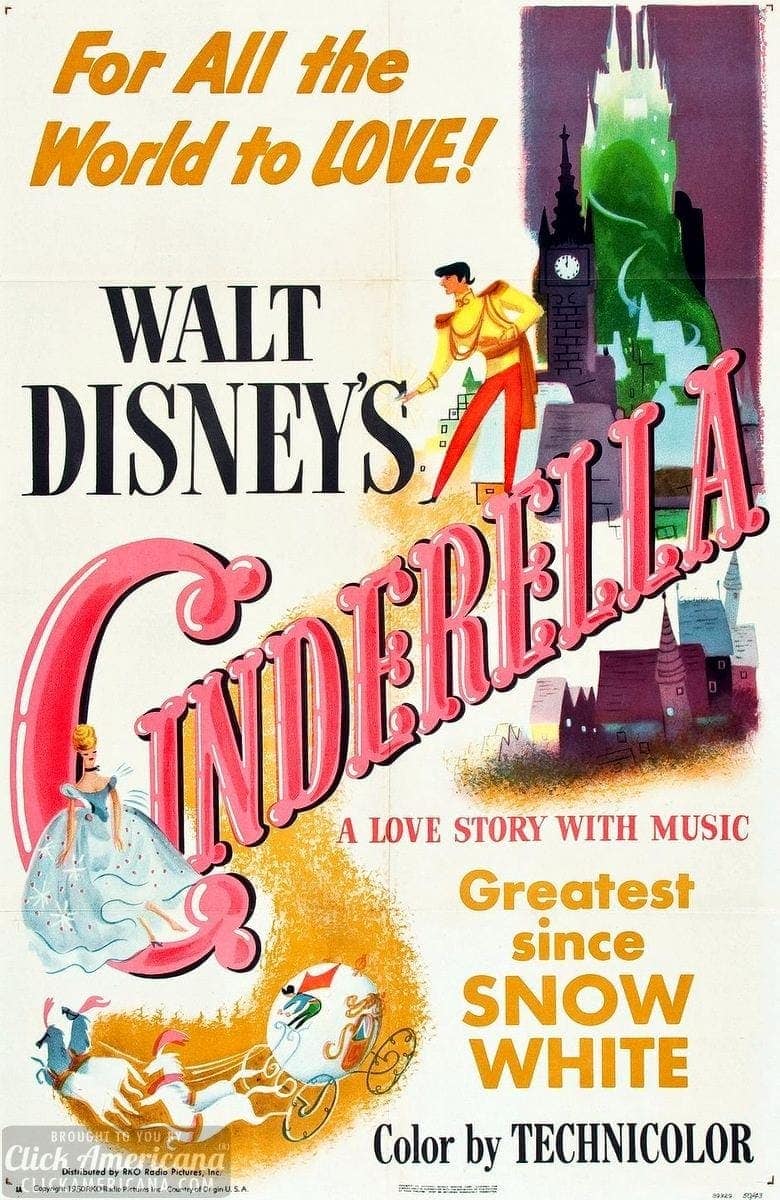 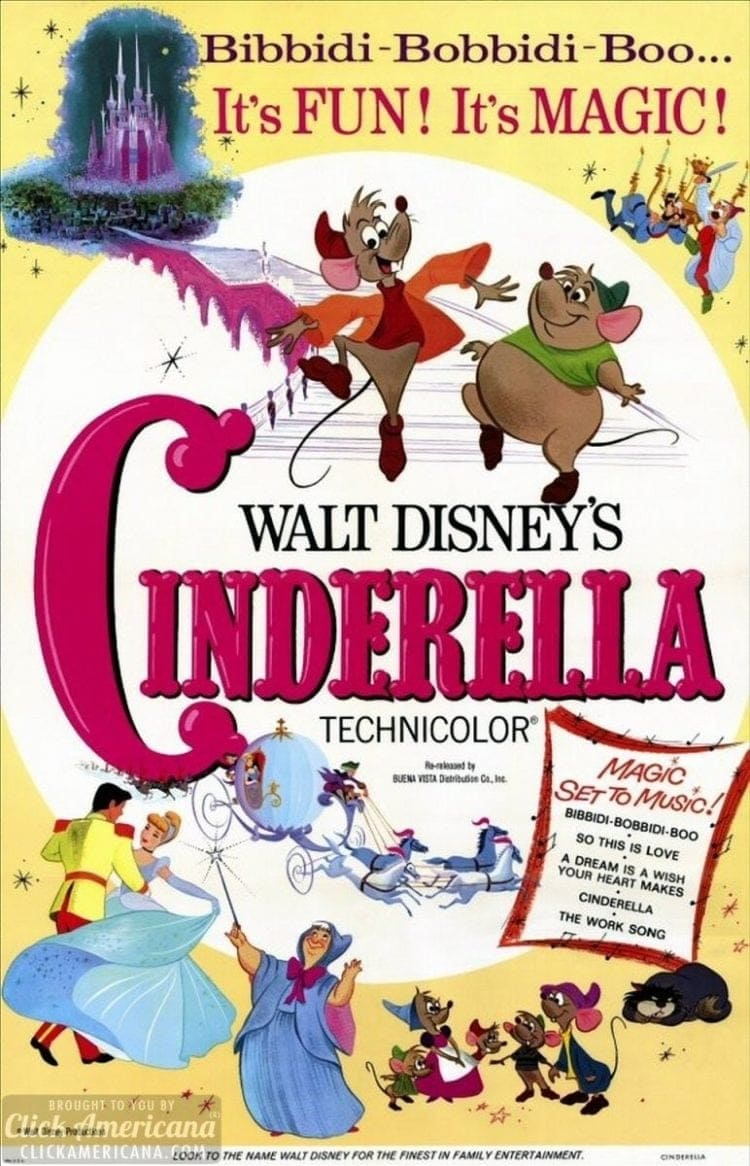 Get Cinderella on videocassette – for a limited time (1988)

This Christmas season, give everyone on your gift list a dream come true! Now, Cinderella, the world’s favorite fairy tale, is on videocassette. This is the gift of the season! The gift your whole family can share together.

Together, re-live the magic of “Bibbidi-Bobbido-Boo” (video clip of this song below) and feel its festive spirit fill your home. The magic of Cinderella will last forever, but you can only buy Cinderella through this holiday season. 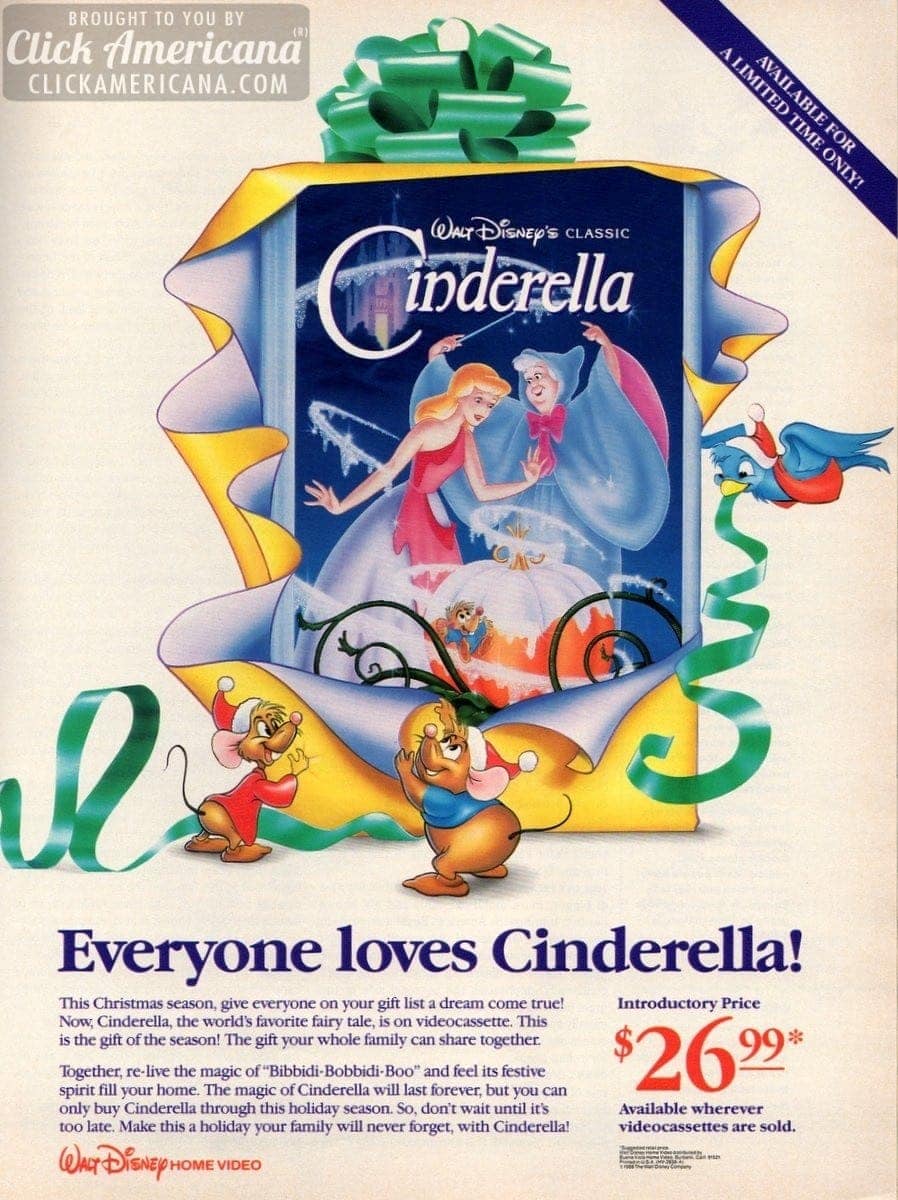 The most celebrated of all the Disney classics, Cinderella is also known as one of Walt Disney’s all-time favorite films.

In the magnificent tradition of “Snow White and the Seven Dwarfs,” Cinderella has enchanted generations with its spellbinding story, charming music, and endearing characters that live in your heart forever.

The beloved fairy tale becomes pure Disney magic as beautiful Cinderella shares her dreams of romance and a better life with the lovable mice Gus and Jaq. When Cinderella’s cruel stepmother prevents her from attending the Royal Ball, the delightful Fairy Godmother appears!

With a wave of her wondrous wand and a bouncy “Bibbidi-Bobbidi-Boo,” the Fairy Godmother transforms a simple pumpkin into a magical coach — and Cinderella’s rags into a gorgeous gown.

At the ball, Cinderella falls in love with Prince Charming, but must flee before the stroke of midnight breaks the spell!

Fully restored and sparkling with heartfelt emotion, captivating comedy, and delightful adventure, Cinderella’s timeless tale of how dreams can come true is now “even better than you remembered it!” Joel Siegel “Good Morning America”).

Treasure it … happily ever after! 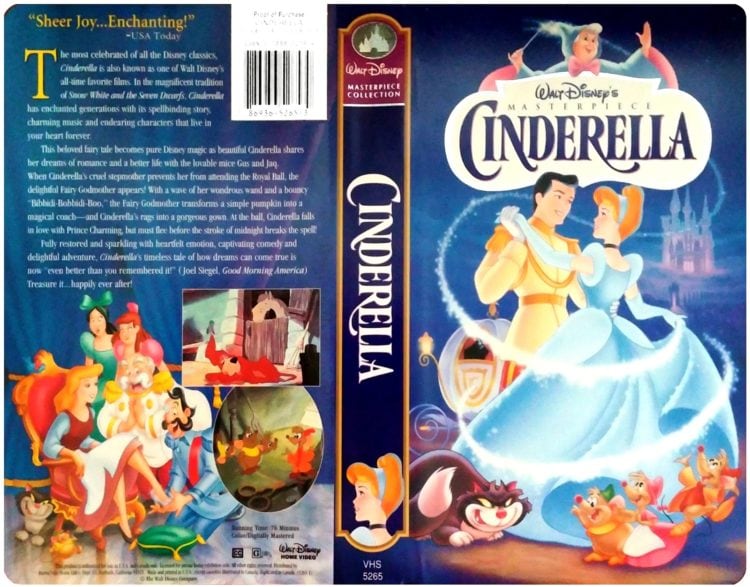 ALSO SEE: Disney’s Old Yeller: The classic movie about the best doggone dog in the west (1958) 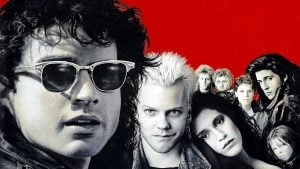 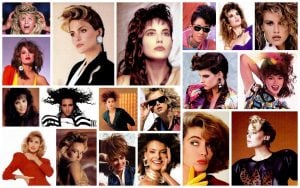