In the weeks before WWI ended, newspapers around the country banded together to promote their cause: an unconditional surrender from Germany.

Dozens of newspapers joined the call, and they finally got what they wished for when, on November 11, 1918,  instead of running the “America’s historic answer” line across the top of the paper, they were at long last able to report “GERMANY HAS SURRENDERED; WORLD WAR ENDED AT 6 A M.” 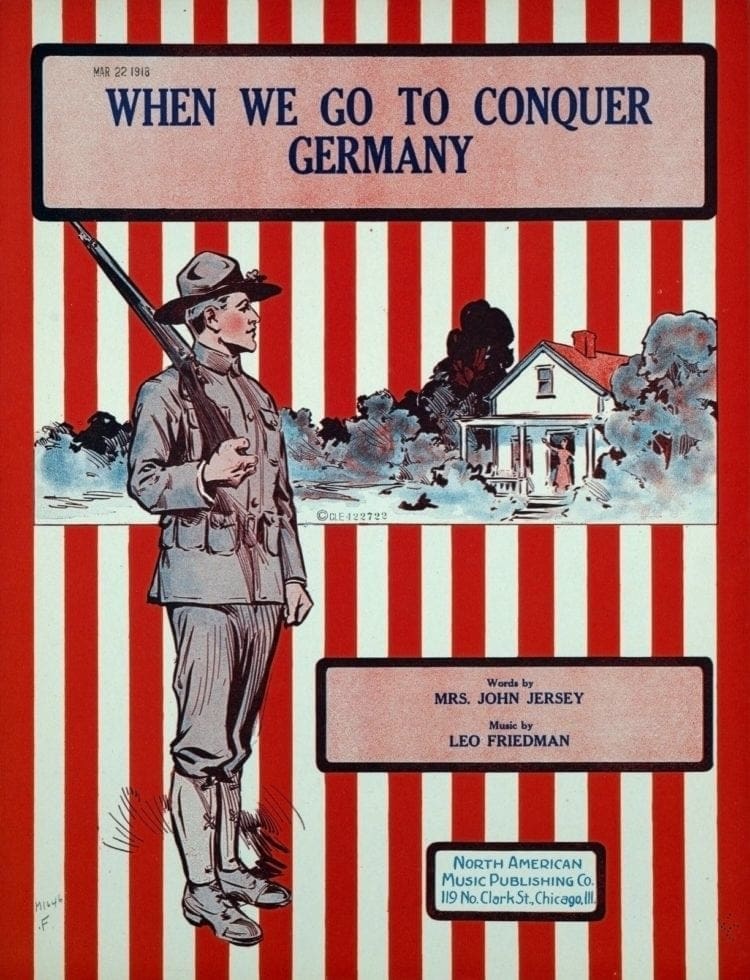 On Monday, The [New York] Tribune sent to a number of American newspapers the following telegram:

Beginning tomorrow, The New York Tribune, with other papers, will carry the line at the top of its front page:

Will you join in this action, and will you advise us by wire so that we may include your paper in the list which we shall print, and is there any “Unconditional Surrender Club” in your city yet?
-New York Tribune.

The following replies have been received:

Phoenix, Ariz., Oct. 14. – “Unconditional surrender” will appear at the head of our first page tomorrow morning. Have no Unconditional Surrender Club, but our people unqualifiedly stand for this policy. 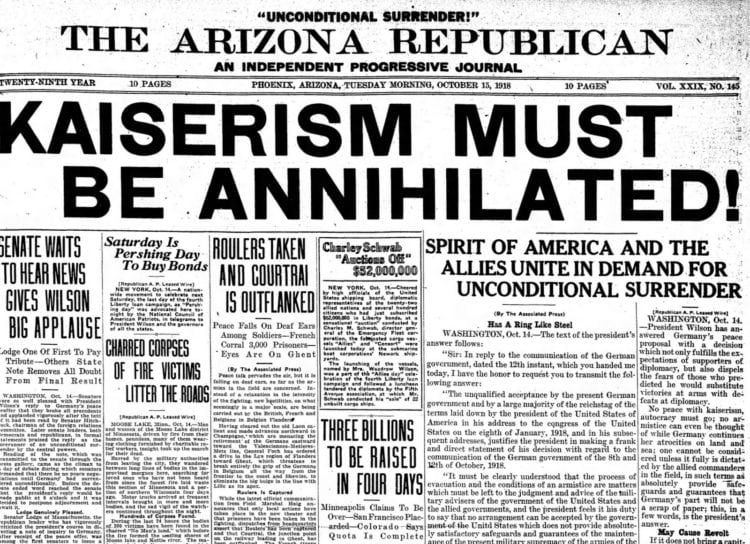 Wichita, Kan., Oct. 15. – We join you. Unconditional Surrender Club here. Growing fast. No doubt about Kansas on that score.

Topeka, Kan., Oct. 15. – We will run unconditional surrender line. No club here yet. 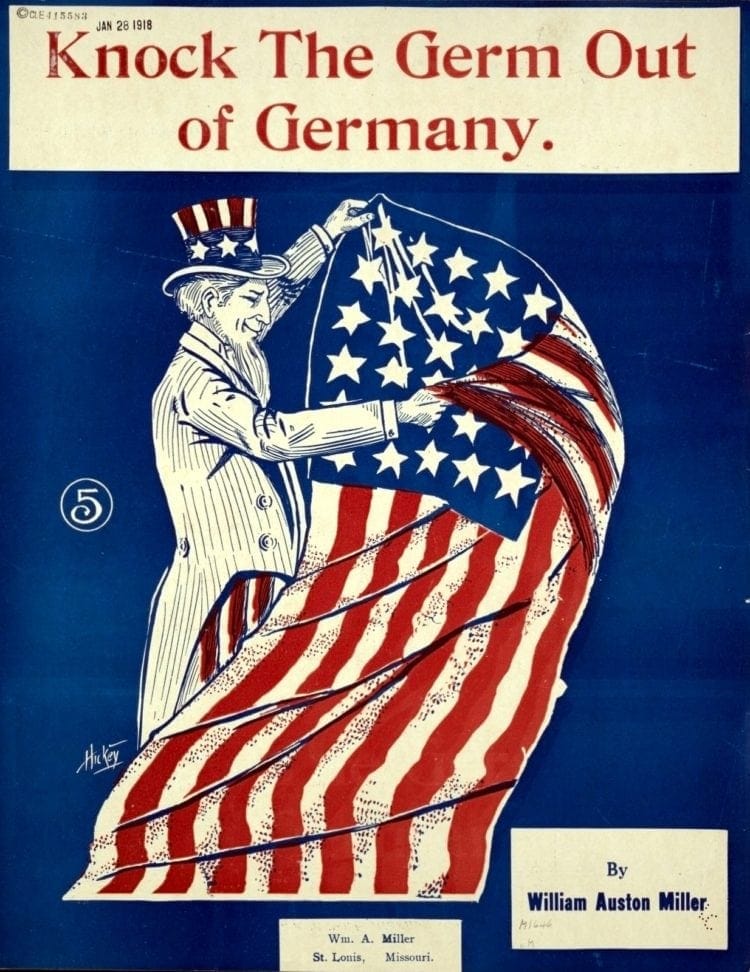 Denver, Col., Oct. 14. – Will use unconditional surrender on top editorial page instead of front page. Typographical reasons. In morning and as long as situation demands. Please give us brief story on results of plan for use in morning.

Salt Lake, Utah, Oct. 14. – The Salt Lake Herald will join in your plan on unconditional surrender. Following is quoted from a front page editorial: “The American people have made it quite plain to President Wilson that they will accept no peace not based on the historic battle cry of General Grant, ‘Unconditional surrender.'” Our allies who must live next door to the unspeakable Hun have spoken in no uncertain terms. Our Unconditional Surrender Club is headed by President Joseph F Smith, of Mormon Church.

Portland, Ore., Oct. 14. – An Unconditional Surrender Club was formed in Portland tonight. “I will guarantee,” said Mayor George L. Baker, who was one of the first to sign the roll, “that this club, whose purpose is to demand unconditional surrender from Germany, as voiced by President Wilson’s demands, will find 300,000 members in Portland and environs.”

St. Louis, Oct. 14. – The Republic for three weeks has carried this line at the head of its editorial page: “Our peace terms: Unconditional surrender by Germany and Austria.” 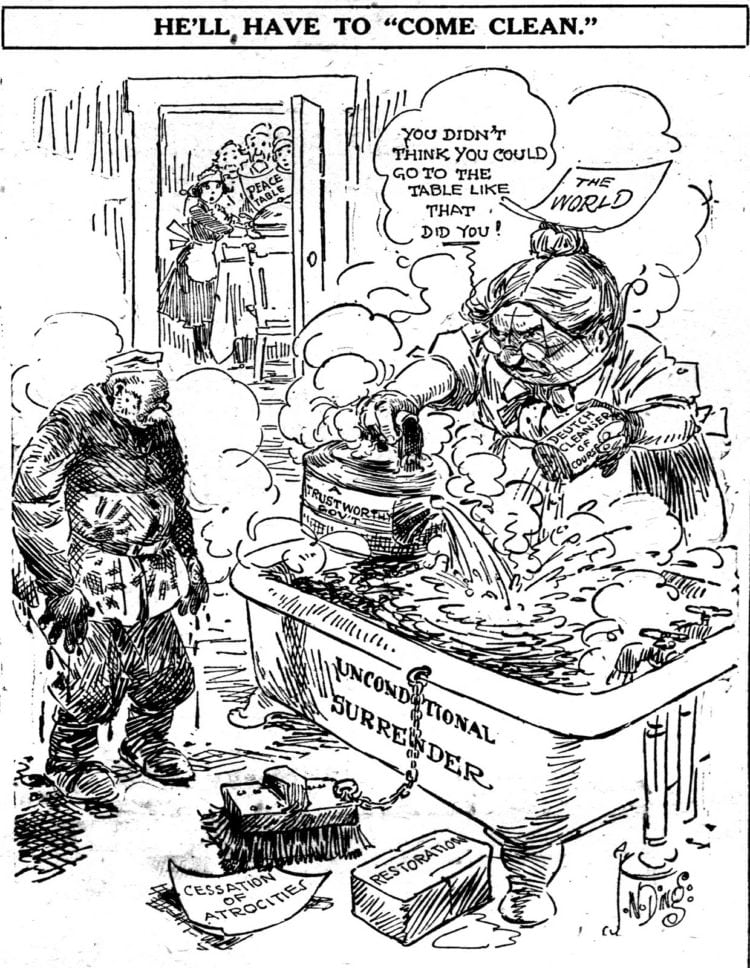 Albany, Oct. 14. – The Knickerbocker Press has published “Unconditional Surrender” across its first page since September 18.

Utica, N.Y., Oct. 14. – Press will use line as suggested. Utica has an Unconditional Surrender Club.

Colorado Springs, Col., Oct. 14. – The Gazette is carrying “unconditional surrender” line suggested by you, and will continue to do so. There is no Unconditional Surrender Club here, and no new organizations are being formed, owing to influenza epidemic.

CINCINNATI, Oct. 14. – Include us in use of historic head. No club, here but there will be one. Cincinnati will never again be German. Citizens stood on streets waiting for President’s answer, and with grim faces and set jaws gave the American answer: “Cincinnati will never stop till Germany is beaten beyond recovery, it must not be peace. It must be unconditional surrender.” You cannot make it too strong. Cincinnati has no fear of anything German. 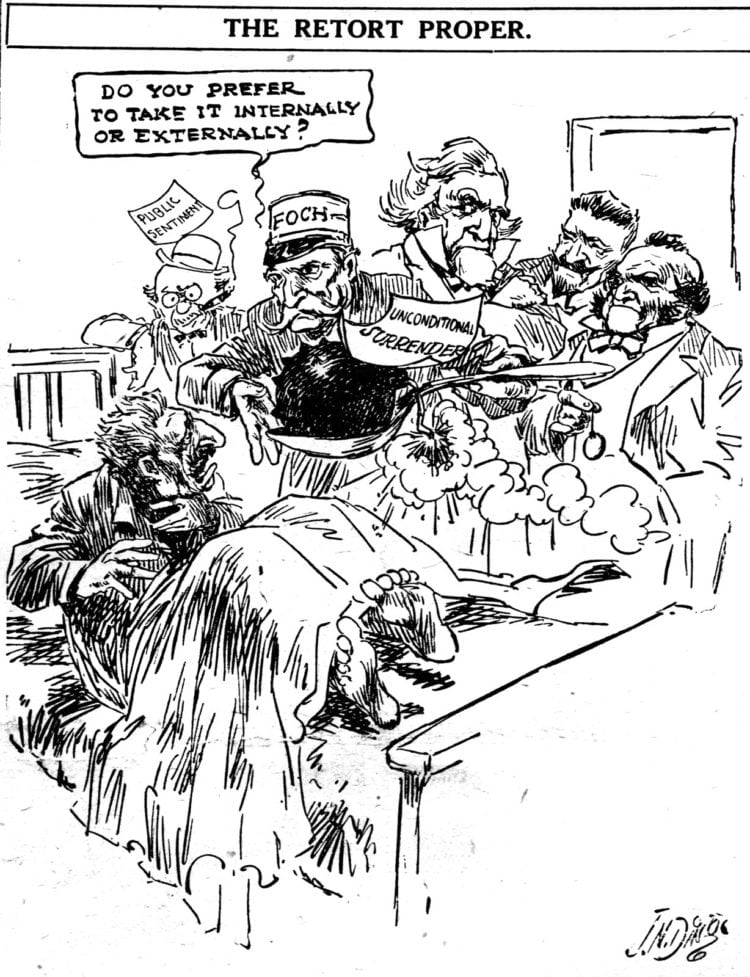 Seattle, Wash.. Oct. 14. – The Post-Intelligencer gladly joins you in the “unconditional surrender.” Seattle has a club.

Louisville, Oct. 11. – The Louisville Herald has insisted from the first that the only answer to Germany’s note should be “unconditional surrender,” and we will reiterate this at the top of our first page from day to day. The Unconditional Surrender Club of Louisville is daily adding hundreds of members to its roster, and the little red, white and blue button of the club is seen everywhere.

San Francisco, Oct. 15. – The Chronicie is using “Unconditional surrender” line on first page. No club here yet. There will be.

Cleveland, Oct. 16. – Got the Unconditional Surrender Club going fine here. Launched Tuesday noon at the principal open-air Liberty Loan meeting in the Public Square; 4,000 members. Can you file us tonight sure brief summary of the progress of the movement? 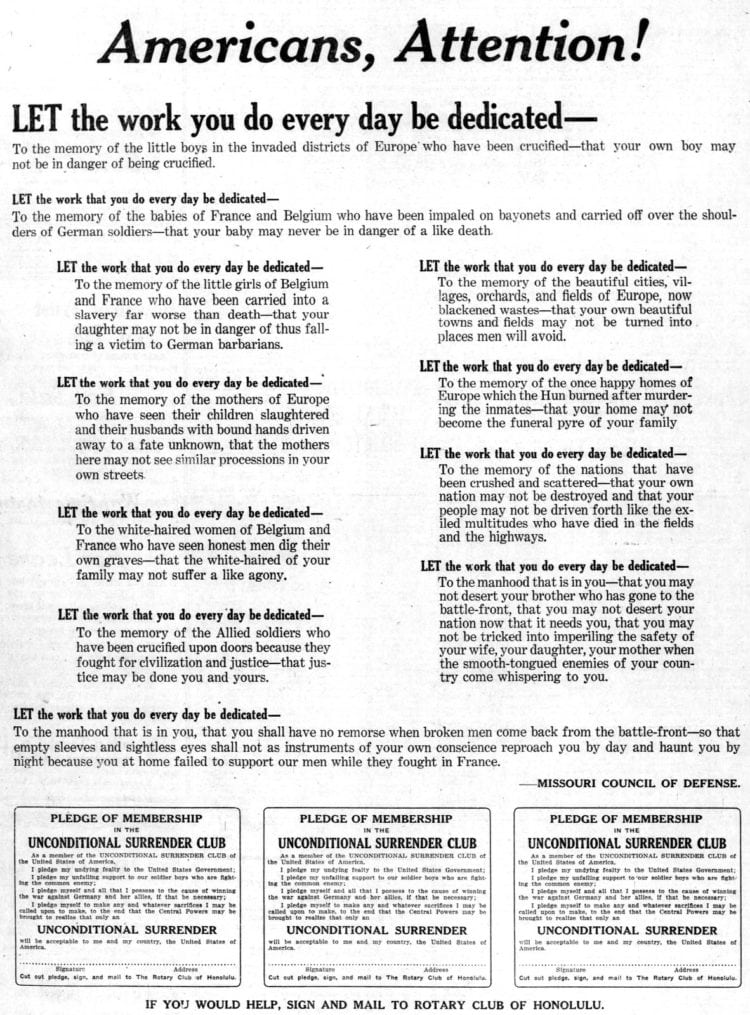 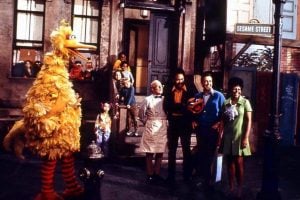 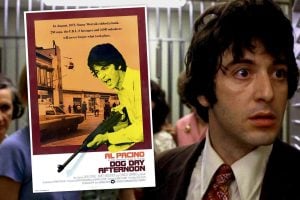 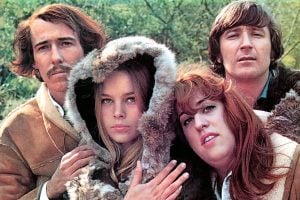