The end of an era: New York’s Waldorf-Astoria Hotel torn down (1929) 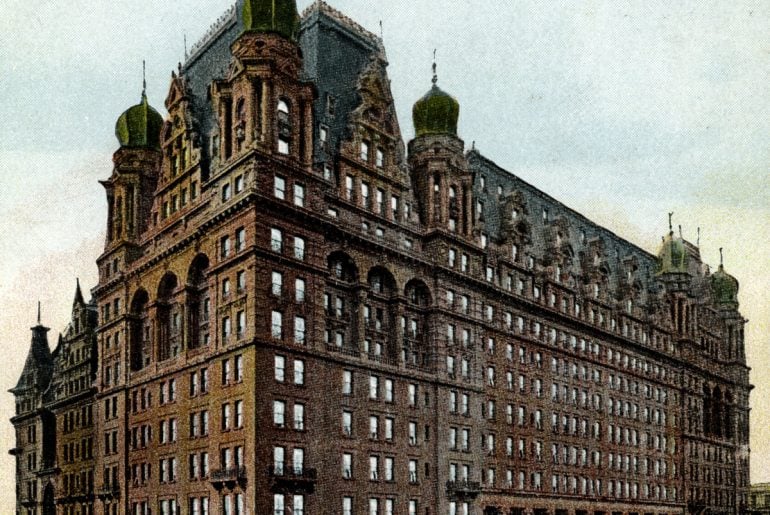 New York’s Waldorf-Astoria, mother of American hotels, passes with a sigh as the new era enters with a roar

New York’s Waldorf-Astoria, mother of American hotels, is to be torn down.

The doors of this thirty-six-year-old internationally-known institution will close May 1 [1929]. The staff who “built up” the Waldorf-Astoria will pass quietly and unobtrusively from its massive doors. Noisy wreckers will clank in to tear it down. The old generation passes with a sigh. The new era enters with a roar.

“I am going to build a hotel,” said William Waldorf Astor in 1892. He was following the advice of his estate agent, Abner Bartlett. He was ignoring the scoffing of his friends.

In March 1893, the Waldorf, first of the luxurious American hotels, was ready to astonish the world. It was a daring enterprise.

It had 530 rooms and 350 baths! And that in a day when bathing was sacred to Saturday night! Such extravagance would never win.

They called it Astor’s Folly. Some called it Boldt’s Folly after George C. Boldt, who was to be its first manager.

Astor visited his hotel twice. Then he went to England to live and die. Boldt directed the Waldorf.

Boldt looked up to find a stocky young man before him. The chap wanted a job.

The boy was Oscar — then Oscar Tschirky — now Oscar of the Waldorf, known throughout the world, decorated by governments.

In 1892, he had been a waiter at Delmonico’s. He had seen the diggers working at 33d Street and 5th Avenue.

“The new Waldorf hotel,” was the answer.

It would be a good place to work. So Oscar applied to Boldt for the job. He got it.

The Waldorf was born.

That night, there was a concert in the great dull red chateau of a hotel. It was for the benefit of St. Mary’s Hospital for Children. The tickets were $5 apiece! Unheard of! But it was worth it.

Fifteen hundred came in the rain to this great hotel. Guides took them through the profusion of stately columns, the dimly-lit rooms. There were splashing fountains and stately sculptures. There was comfort and ease and elegance without gaudiness. The crowds admired. And deplored its situation “so far uptown.”

And the wiseacres seemed to be right.

After the first burst of applause, the Waldorf was not so successful. The bewhiskered gentlemen failed to patronize the luxurious hotel. Petticoated ladies burned their altar fires to social leaders and indulged in secret smoking elsewhere.

True, within a month after the hotel opened, it entertained a party of Spanish grandees. They were headed by the Duke and Duchess of Veragua, on the way to Chicago to attend the world’s fair. The Infanta Eulalia came soon after. On April 19, 1893, these distinguished Spaniards held a reception at the Waldorf. It was attended by 100 prominent women of New York, Washington, Baltimore, Philadelphia and Chicago.

But there was no great rush of foreign travel to the World’s Fair.

And they still tell in whispers that in the summer of 1893, there were just forty guests at the Waldorf, and 970 servants on the payroll. Yet Boldt didn’t discharge a helper. And in three years, he had paid off all obligations and was on the way to financial success.

This Boldt and his Oscar were men of ideas. Anything new in the hotel business originated at the Waldorf.

It was Boldt who coined the slogan, “The guest is always right.”

It was he who, in 1897, urged John Jacob Astor, estranged cousin of William Waldorf, to give up his estate adjoining the hotel, for the Astoria twin of the Waldorf. The twin hotels became the Waldorf-Astoria.

Between Boldt and Oscar, the famous “baked potato lunch” in the oak room was inaugurated. All those who sauntered to the broad fireplace of the oak room were treated gratis to hot and well butered baked potatoes.

He began the “Bagley’s Musical Mornings,” which lasted for a generation. No one was bidden. Nothing was advertised. Yet when the musical mornings arrived, hundreds were turned away.

But it was the Bradley-Martins who made the Waldorf a social success.

There were three bands! Mrs Bradley-Martin’s gown, a la Mary Stuart, cost $60,000. Her husband was masked like a courtier of Louis XV. The Lexow investigation and the Cuban troubles were swept from front pages by the Bradley-Martin ball. From ocean to ocean passed the word: “And they didn’t go home ’til 5 o’clock!”

The newspapers printed editorials on the waste of wealth.

In vain did Mrs. Bradley-Martin declare her motive in giving the ball was to provide employment for poor dressmakers, carpenters, florists, caterers and the like.

But the Waldorf-Astoria emerged a social success.

SEE THE SPLENDOR: Take a trip back to New York’s original Waldorf-Astoria Hotel

With the advent of ladies in fine feathers in Peacock Alley, the promenade of the hotel, and men with a jingle in their pockets before the massive four-sided bar came the detective force operated at a cost of $25,000 a year.

Joe Smith, old Scotland Yard inspector, has headed it for thirty-one years. Mayor Gaynor wanted to make Joe deputy police commissioner. Joe would have none of it. He stayed with the Waldorf- Astoria.

For a while, Smith hired ex-prizefighters as assistant house detectives. They were too “dumb,” too apt to get the hotel into damage suits, thought Joe. But they never did.

The assistants who will leave the Waldorf-Astoria are smart, up-to-date young chaps, well-read, “and about as good as lawyer when it comes to skimming close to trouble and yet missing it,” according to Joe’s description.

One set of arrests was a sorrow both to employee and to Oscar.

In 1927, five servants who had been employed from three to twelve years, were arrested for stealing $40,000 in ten months from diners’ checks.

The night before the Waldorf opened, Mrs. George Merritt Smith took charge of Western Union’s telegraph desk. She has been with them for thirty-five years. The first day she sent 10 messages. Now she sends almost 500 a day. 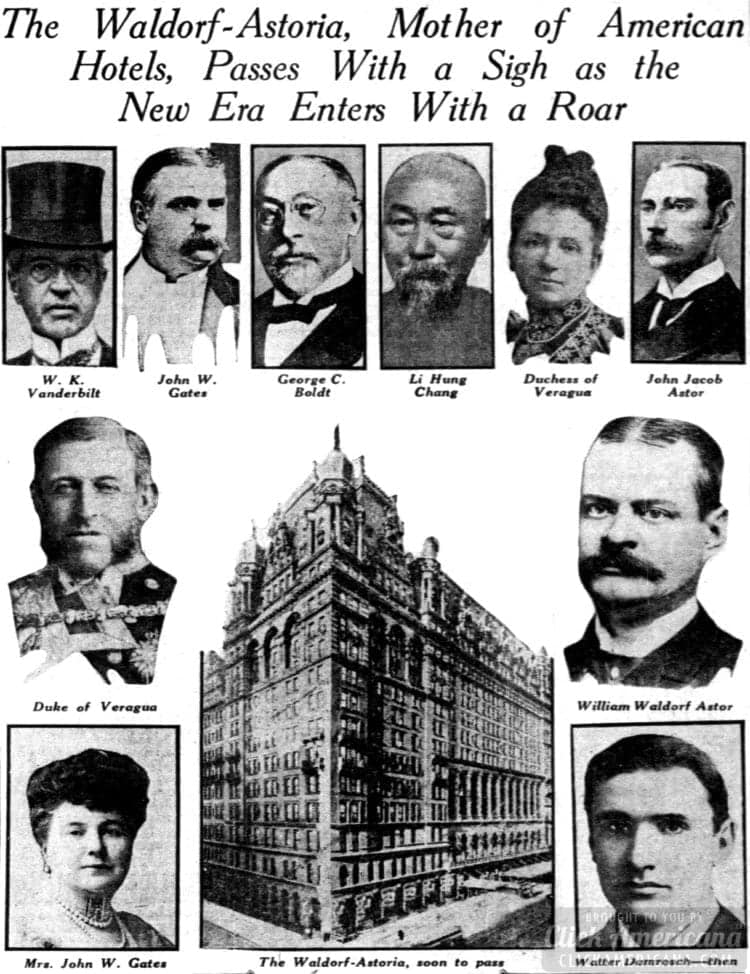 A famous light opera star was sitting in the Myrtle room smoking. This was long before the Waldorf permitted their feminine guests to smoke in public. There she sat, knees crossed, ankles showing, a cigarette in one hand, a liqueur in the other. Tut-tut!

Had the lady been Mrs. Astor or Mrs. Belmont, says Oscar, the matter might have become the vogue. But she wasn’t.

And Mr. Boldt requested Oscar to “speak to her.”

There was the war of the whiskers.

The hotel manager decreed that employes must be sans whiskers. That in the days when whiskers covered a multitude of things! When the manager went so far as to say no bewhiskered cabby night drive into the marvelous port cochere.

What colossal nerve! Manhattan talked about it. The cabbies held meetings. Even the governor pleaded in behalf of facial foliage. The manager was adamant (reason unknown) and the Waldorf-Astoria became clean-shaven.

There was the visit of Li Hung Chang in 1896. He, the wisest of the Chinese, would have no hotel food. He brought with him a great retinue of cooks, for he would eat none of the Occidental viands.

And among the many visits of princes and potentates, that of Henry of Prussia in 1902 stands forth.

For after days of preparations without parallel, and drilling of servants to please Henry, the water pipes got out of order. And the world chuckled while Waldorf-Astoria servants rushed wooden buckets of water to the prince’s bath.

PEEK BEHIND THE DOORS: See the rooms at the elegant Waldorf-Astoria (1903)

A bedtime bite at 4 in the morning

There are numerous stories about John W. (Bet a Million) Gates, who lived with his wife in a $20,000 apartment at the Waldorf for years.

How he’d stay out late playing poker. How he carried loose diamonds in his pockets to appease his wrathy wife. How, after they’d made up, she’d slip into the Waldorf kitchen to fry him a couple of eggs for a bedtime bite, at 4 am!

Gates played bridge for $100 a point.

There, in informal conversation, Gates and John W. Lambert, Max Palm and others formed what is now the U. S. Steel Corporation.
In 1916, Boldt died. The hotel went into the hands of the Du Pont-Boomer interests. An audience of notables reviewed a parade of notables, passing through the corridors as the years fled.

Then came the world war and modernism. And the Waldorf went out of fashion.

Now it is over. A fifty-story building will stand on the site of the Waldorf-Astoria.

Were Boldt here on May 1, he might say, “Close the door, Oscar.”

For the Waldorf is dead. 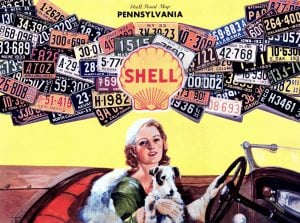 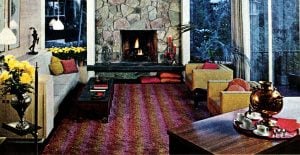 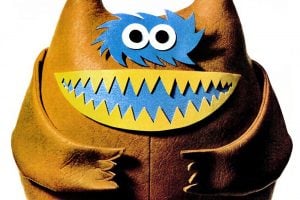