Remember how the Peanuts gang starred in these old Met Life ads? 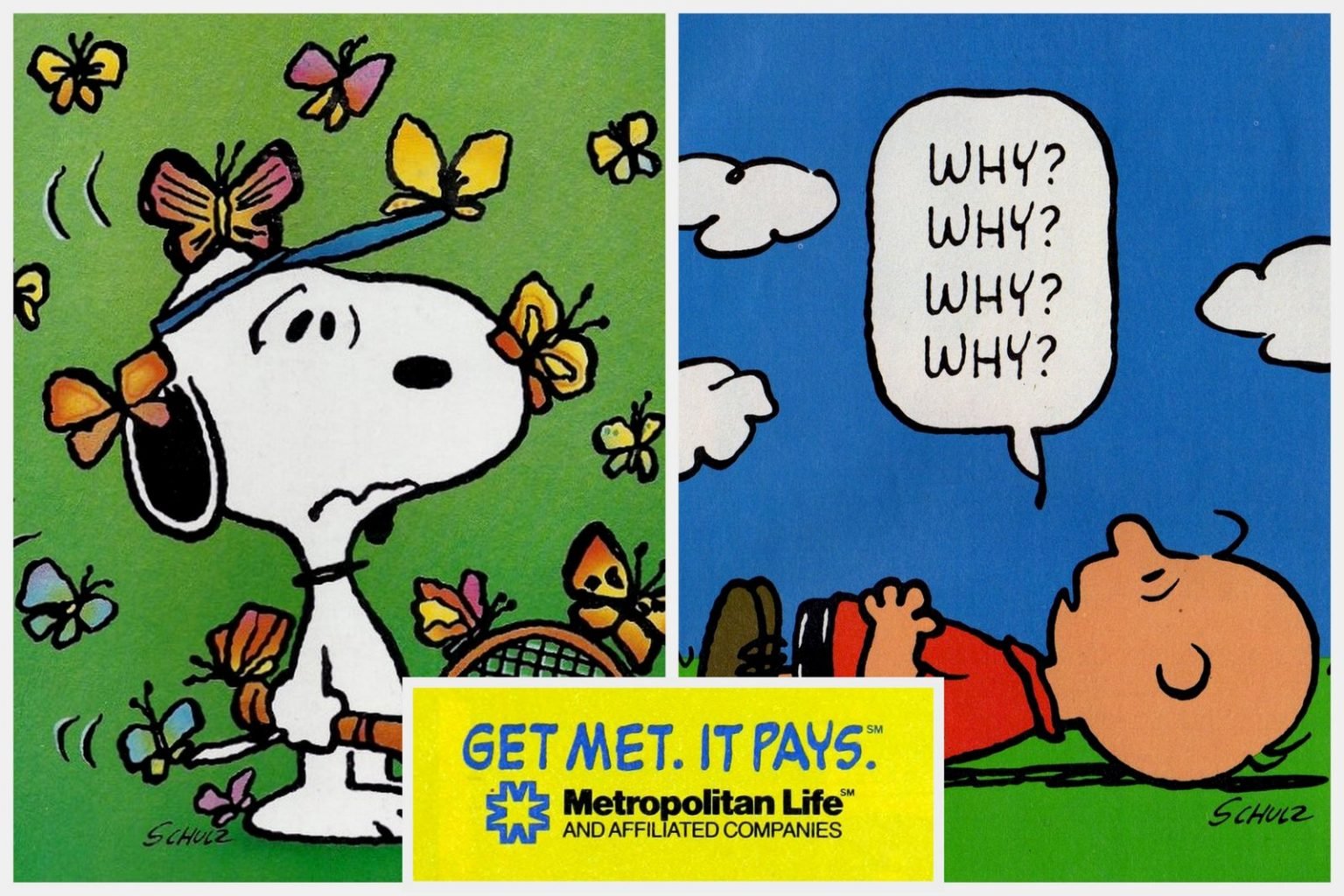 While popular cartoon kids talking about life insurance and IRAs might not seem like a natural match, in the ’80s & ’90s, the combination was a hit.

When Peanuts creator Charles M Schulz licensed Snoopy, Charlie Brown, Peppermint Patty and the gang to promote Met Life services, it was only the fourth time he let the gang appear in corporate ads.

The cartoon characters appeared in print ads and TV commercials starting in 1985, as part of what was initially a $20 million advertising campaign. Take a look back here.

In the long run, security is better. Get Met. It Pays. 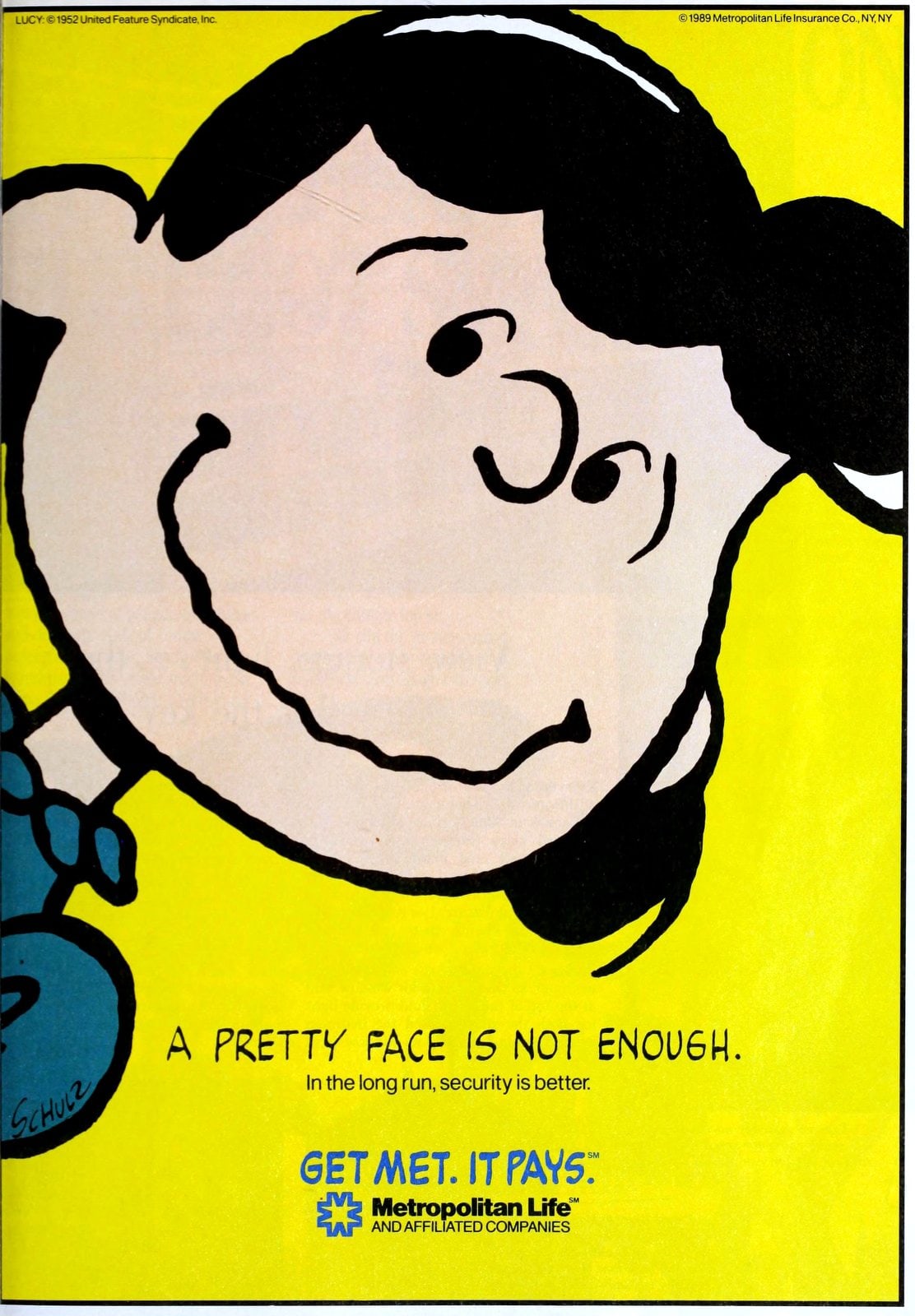 Linus and the Great Pumpkin – Peanuts for Met Life (1987)

Talk about growth! What’s even better than a life insurance policy that gives you lots of benefits?

One that could help your investment grow. With Universal Life II from Metropolitan, you can invest your money a lot of different ways.

Choose from stock, bond, fixed income, money market funds, or a fund which combines several of them. And see how easy it could be to reap the benefits. 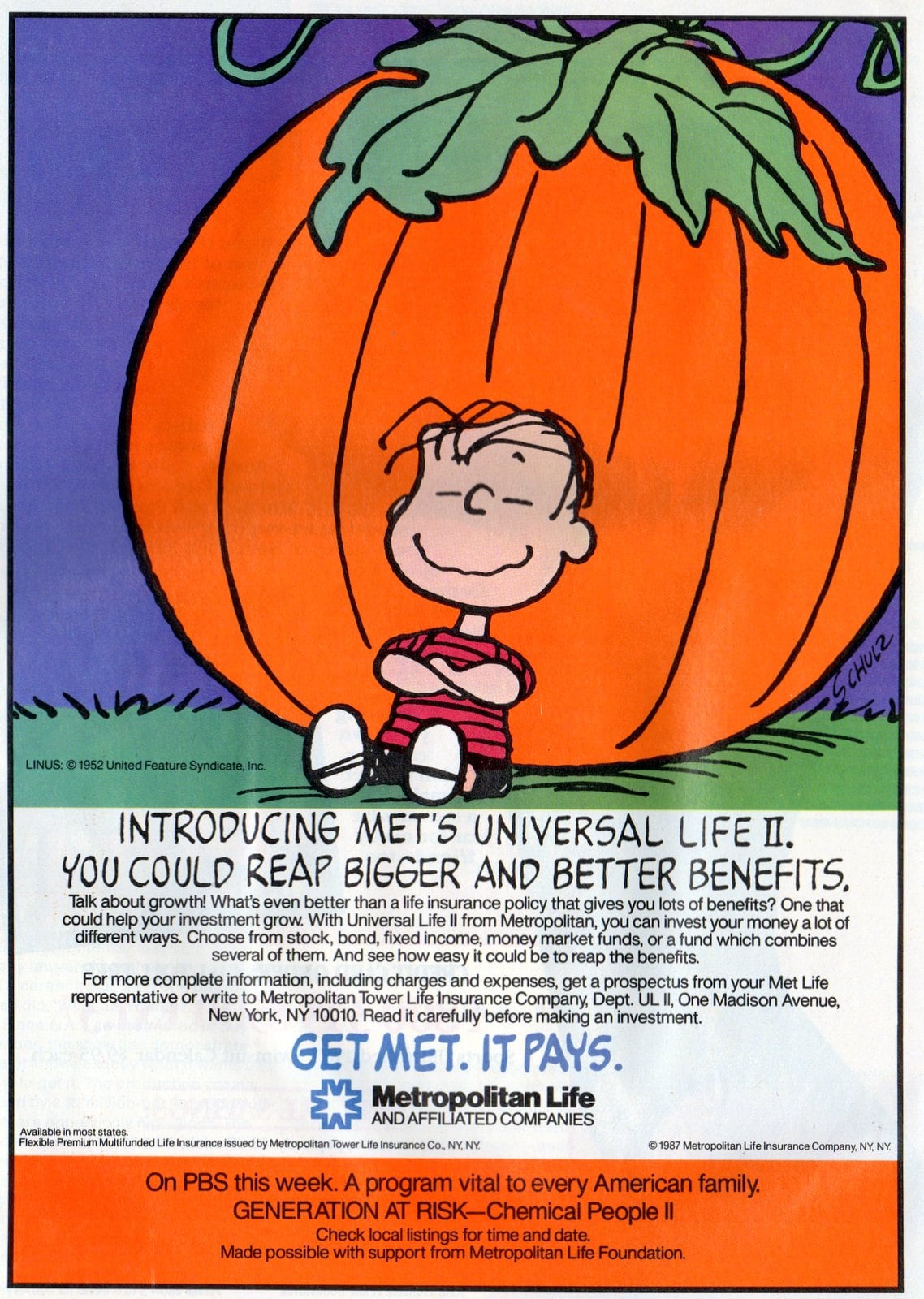 Snoopy with flock of Woodstocks (1985)

There goes the Metropolitan Life prompt payment squadron making sure checks get out as fast as possible! 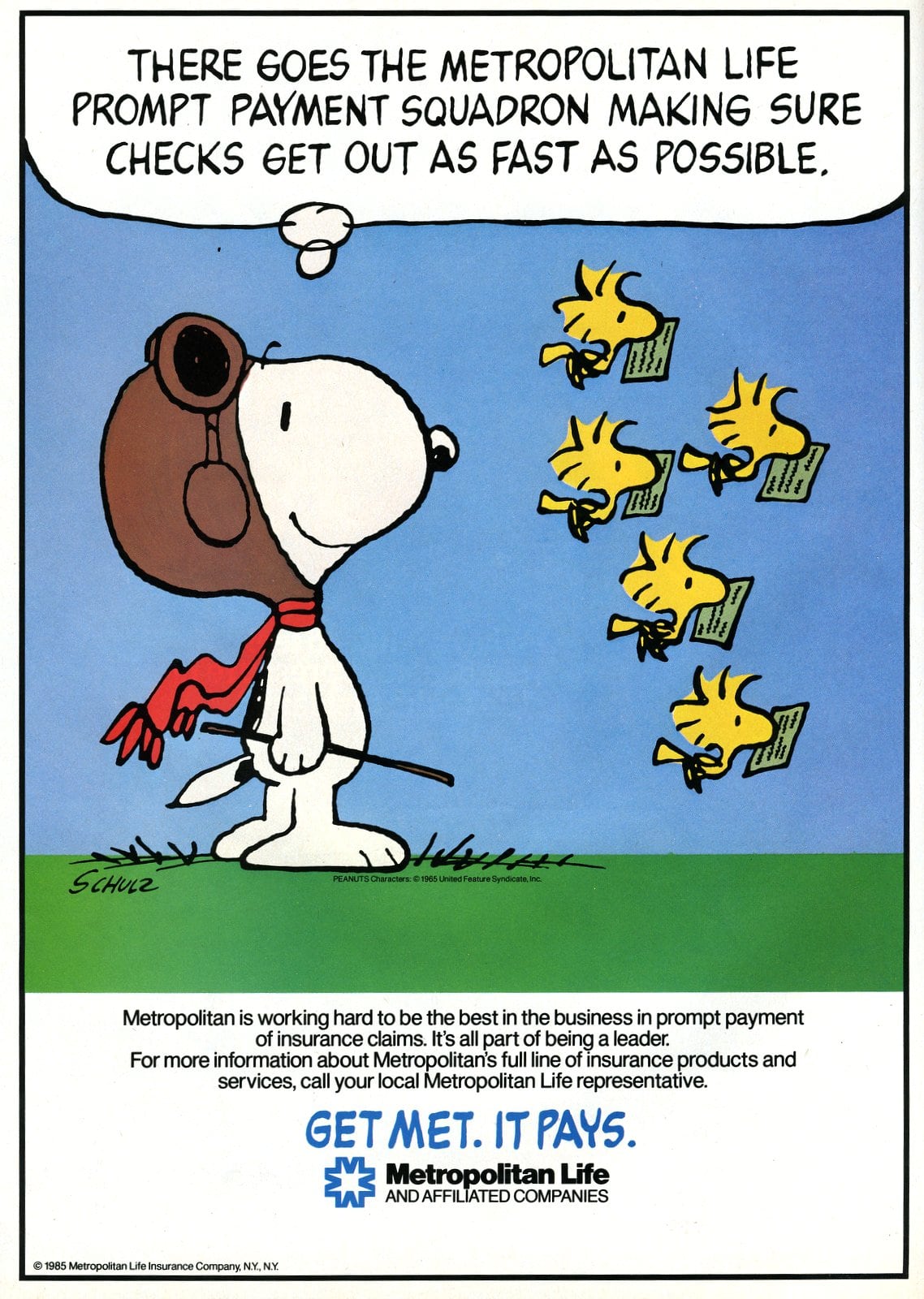 Sally: I’m pleased to announce that MetLife has some of the best mutual fun.

Founded in 1924, the Trust has an impressive record of growth. A record achieved by maintaining a diversified equity portfolio of high-quality, well-established companies in a broad range of industries. 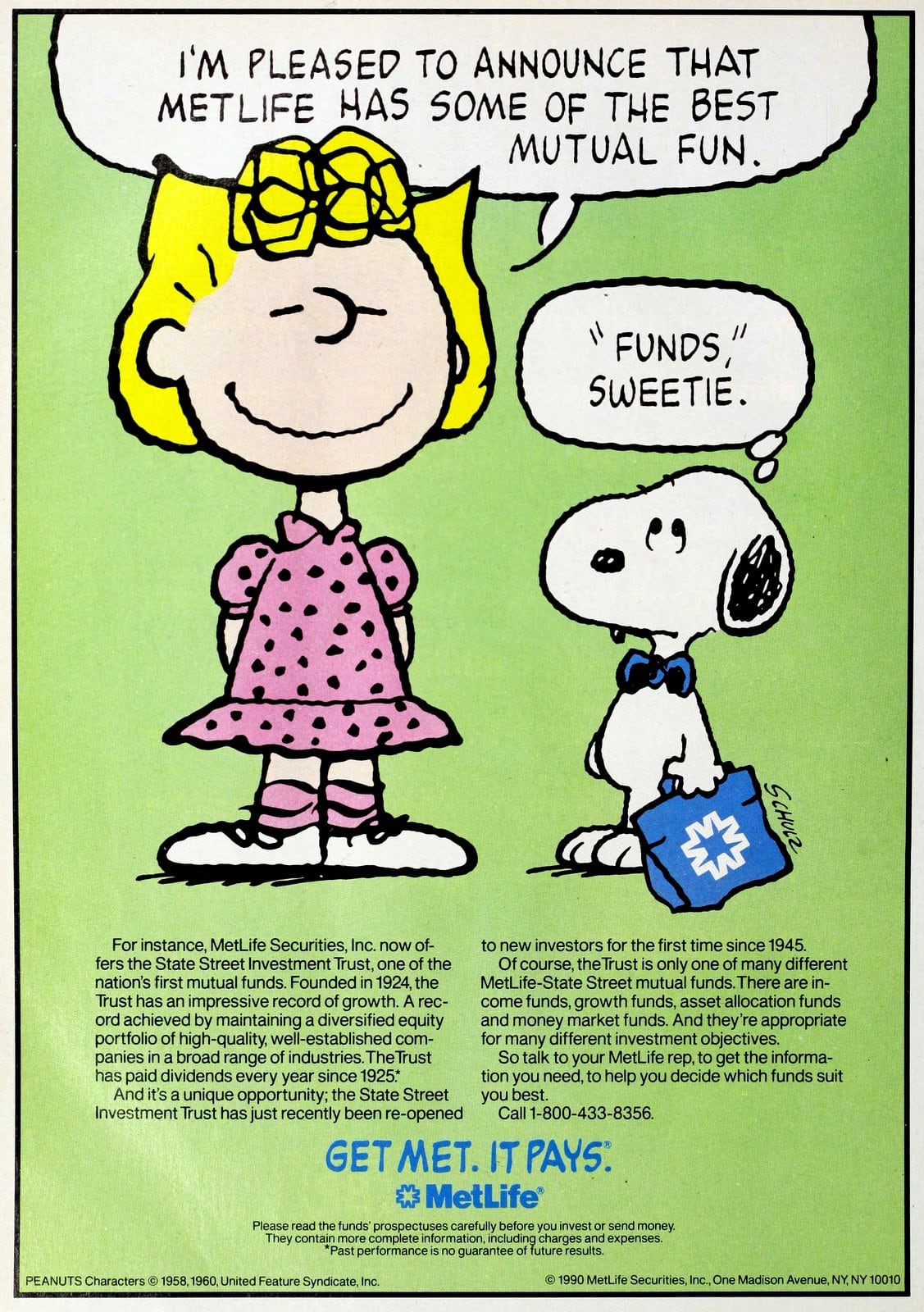 Peppermint Patty: Met Life representatives make a point of spelling things out in clear language before you sign up for any kind of insurance. Very reassuring. 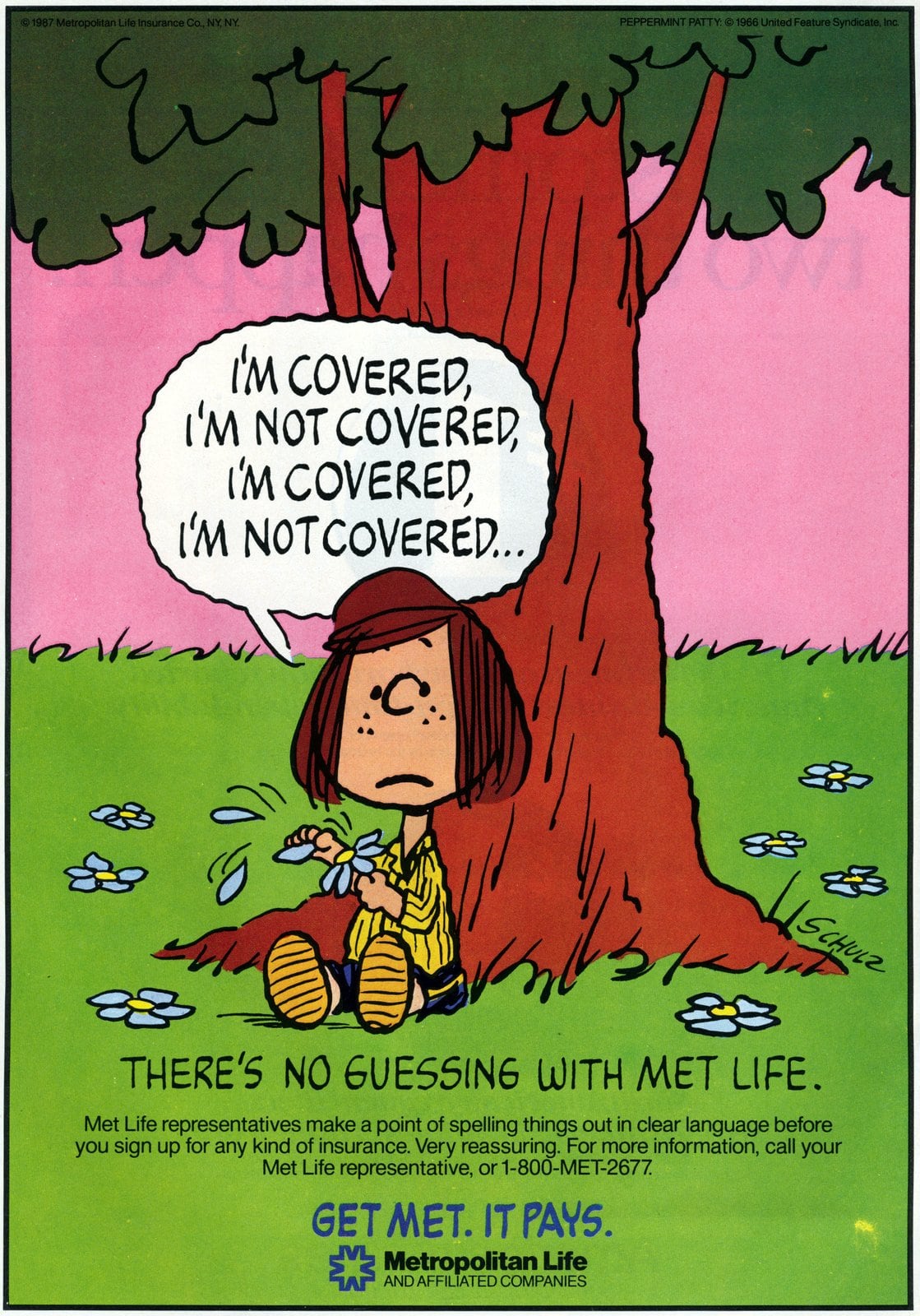 Snoopy: We’ve had a hundred years’ experience in weathering the rough spots. In over a hundred years of storms and calms, Met Life has never failed to meet its obligations to its customers.

And we’re helping you get the insurance protection and financial services you need, now and in the future — whichever way the wind blows.

Get Met. It pays. / Metropolitan Life and affiliated companies 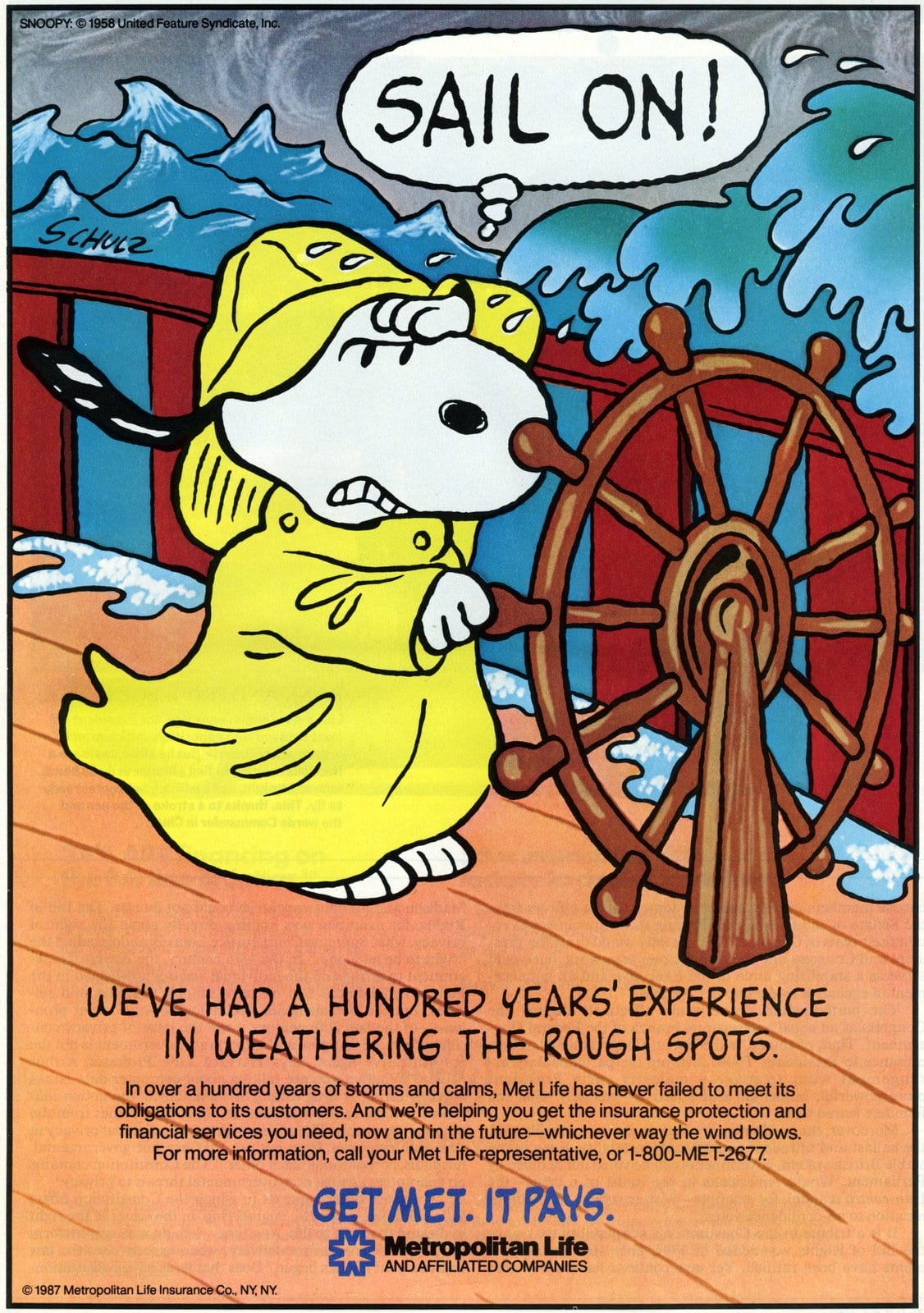 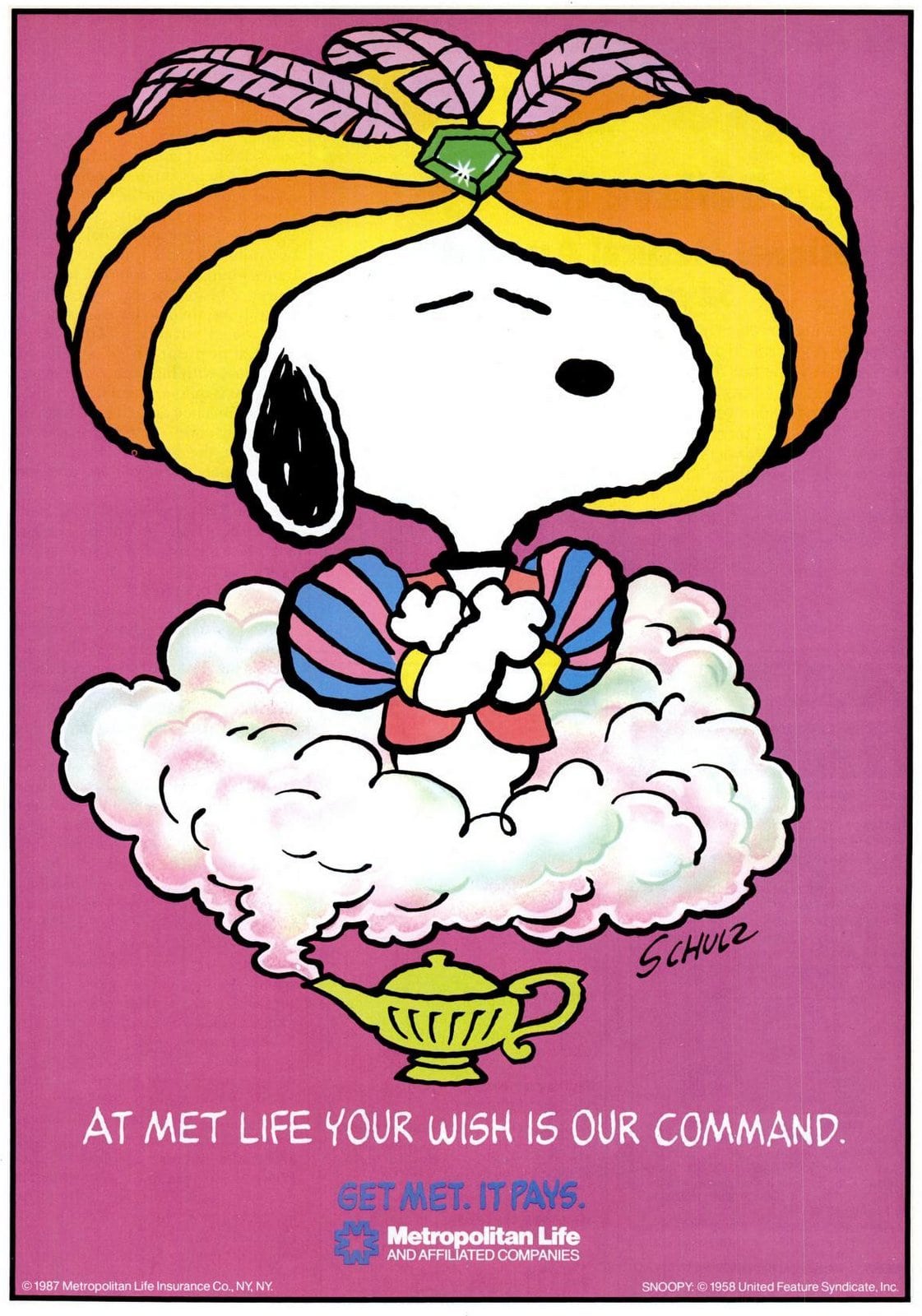 These are the ratings, all the best you can get.

From A.M. Best and Company for Financial Position and Operating Performance: A+ (Superior).

From Standard & Poor’s for Commercial Paper: A-1 Plus.

For LongTerm Debt: AAA. For Payment of Claims: AAA.

MetLife and affiliates manage over $128 billion in assets, serving more than 45 million people. MetLife has earned this pedigree. 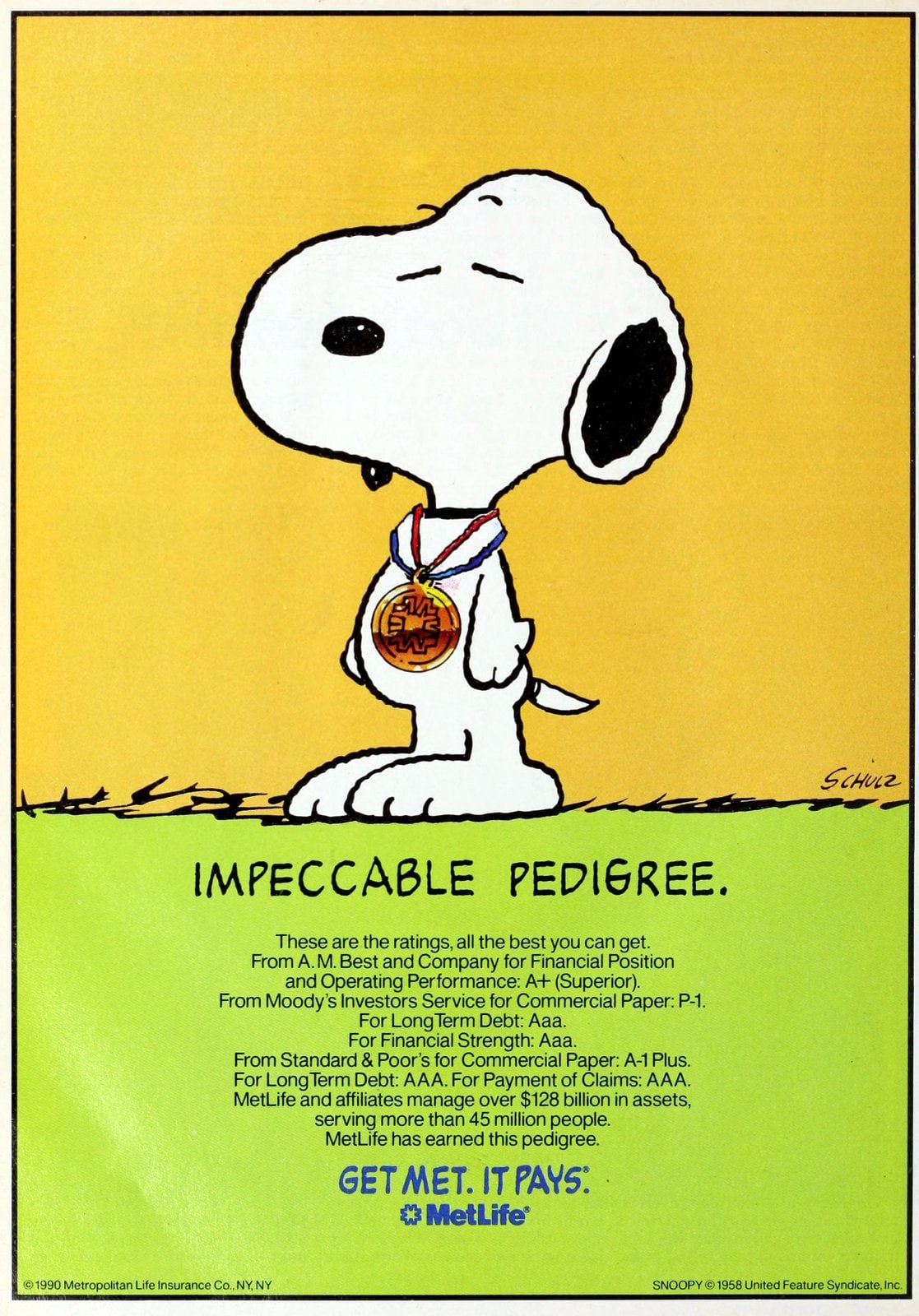 Poor, poor Charlie Brown. When it comes to his taxes, he finds he has nothing but questions. Fortunately, Met Life has answers.

There’s the Met Life IRA, for example. A Met Life IRA can insure you a welcome tax deduction now plus a generous retirement income in the future. Met Life can also guarantee all the money you put in. 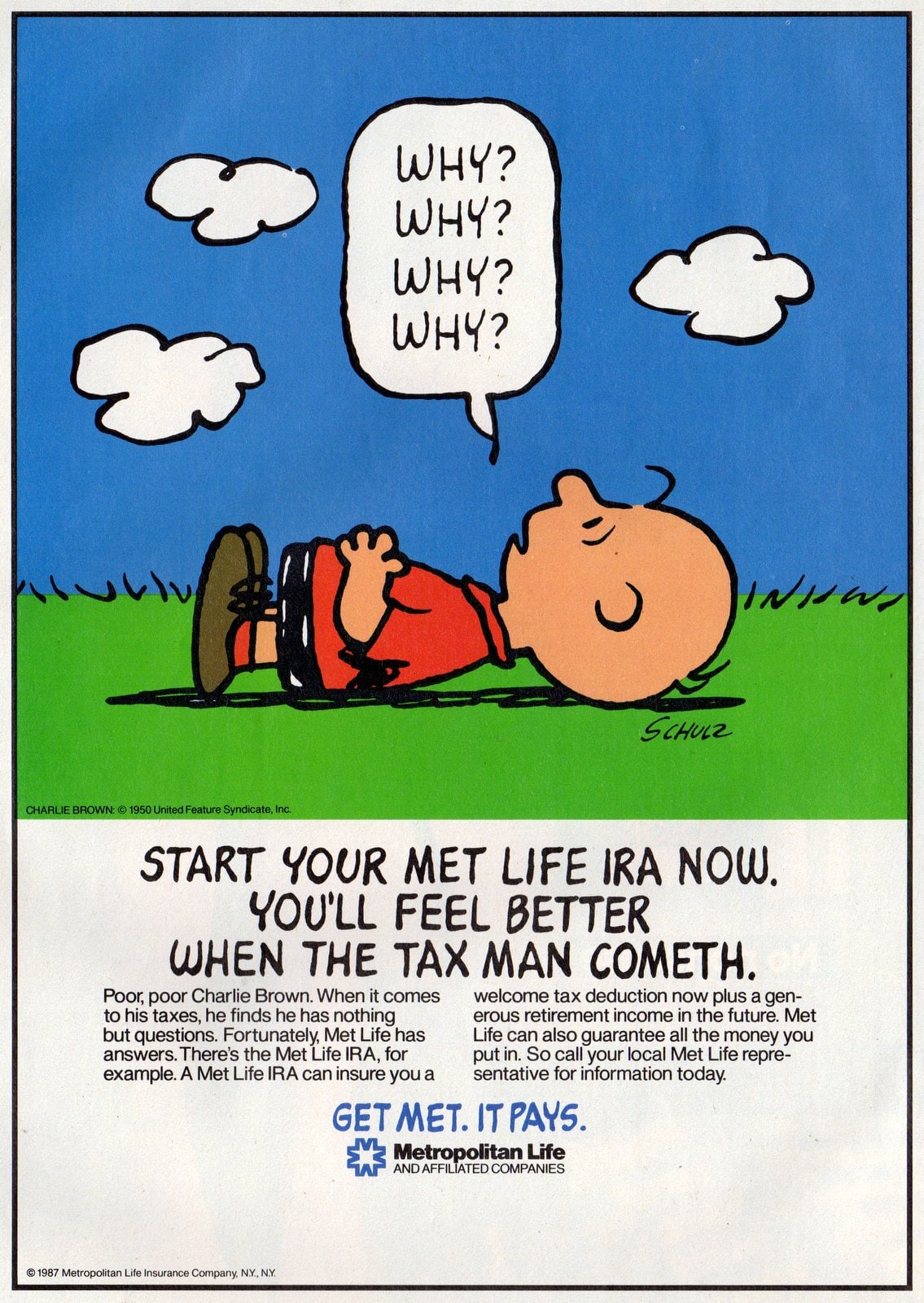 John Creedon, president of the Metropolitan Life insurance Co., meets up with Snoopy during an unveiling of the company’s $20 million advertising campaign that will feature characters from Charles M. Schulz’s ‘Peanuts’ comic strip. 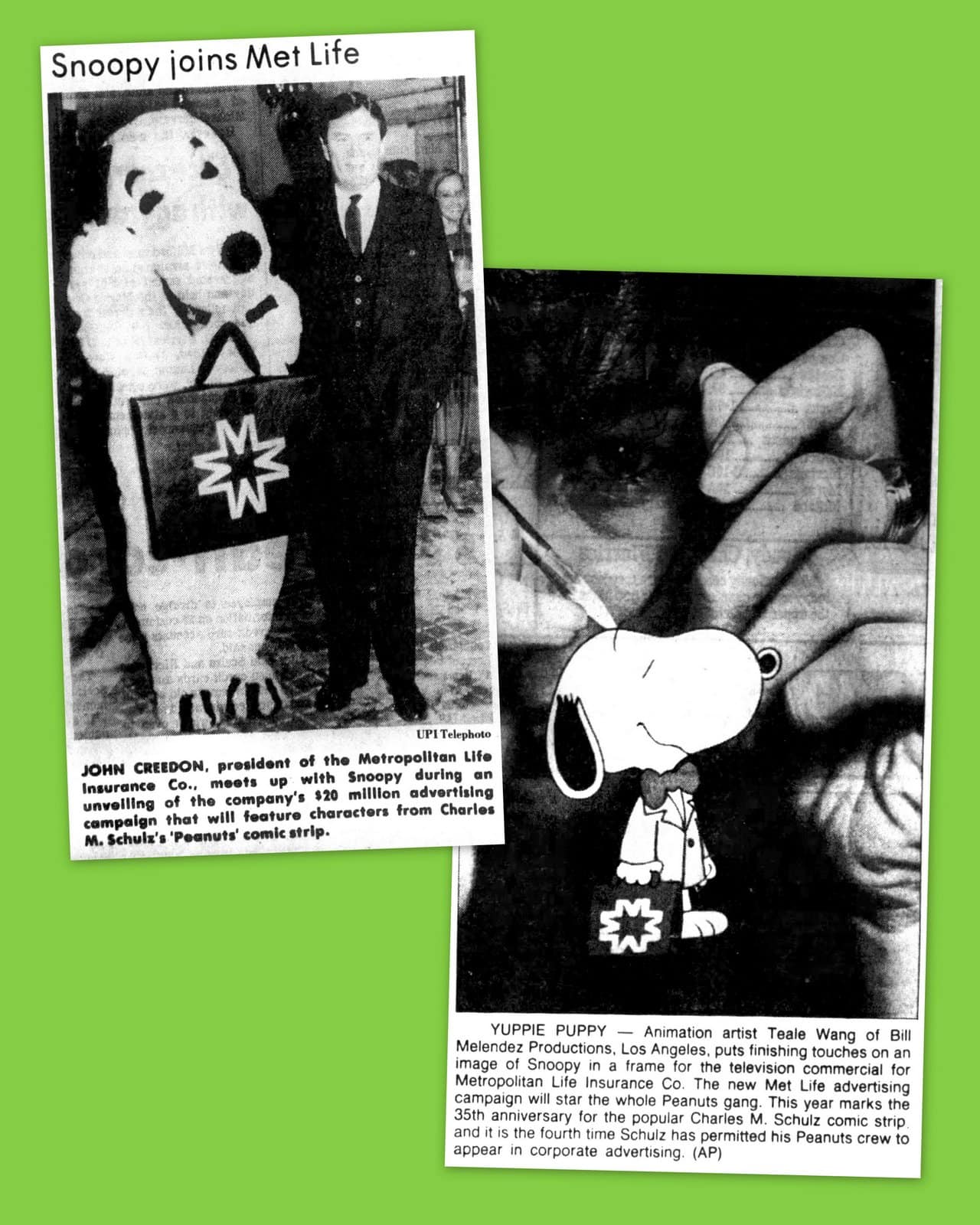 Animation artist Teale Wang of Bill Melendez Productions, Los Angeles, puts finishing touches on an image of Snoopy in a frame for the television commercial for Metropolitan Life Insurance Co.

This year marks the 35th anniversary for the popular Charles M. Schulz comic strip and it is the fourth time Schulz has permitted his Peanuts crew to appear in corporate advertising. 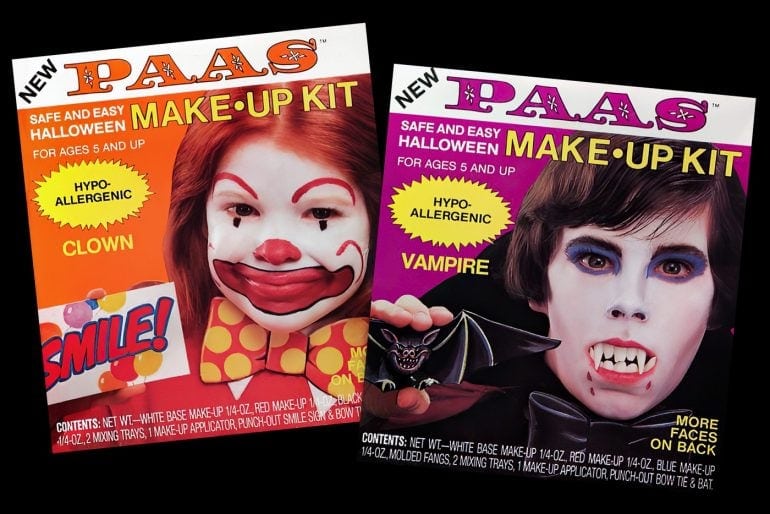 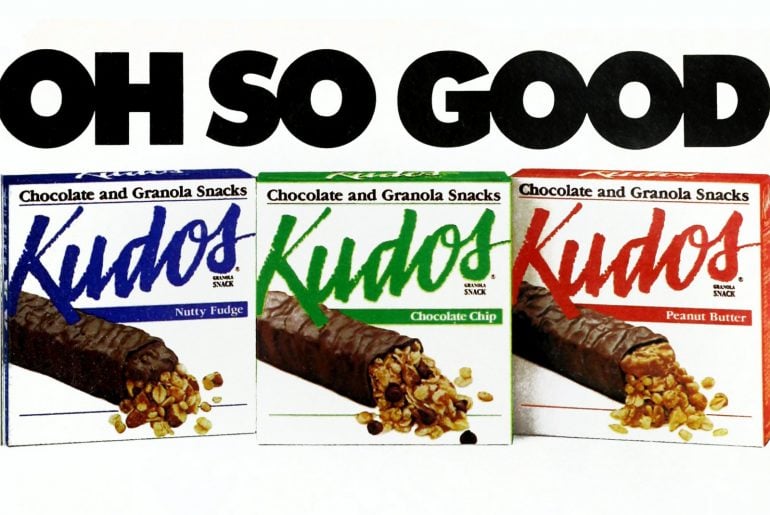 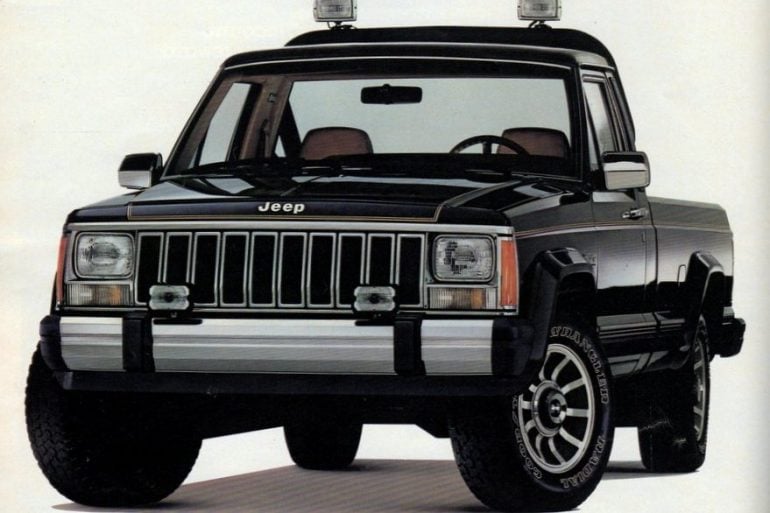 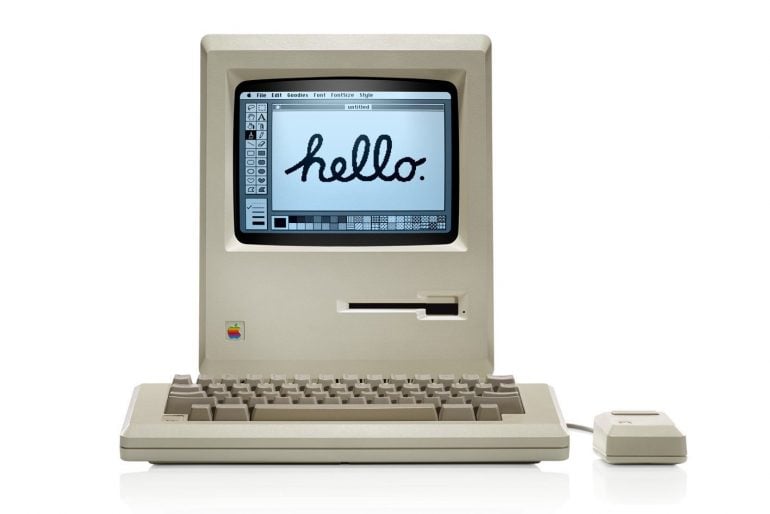 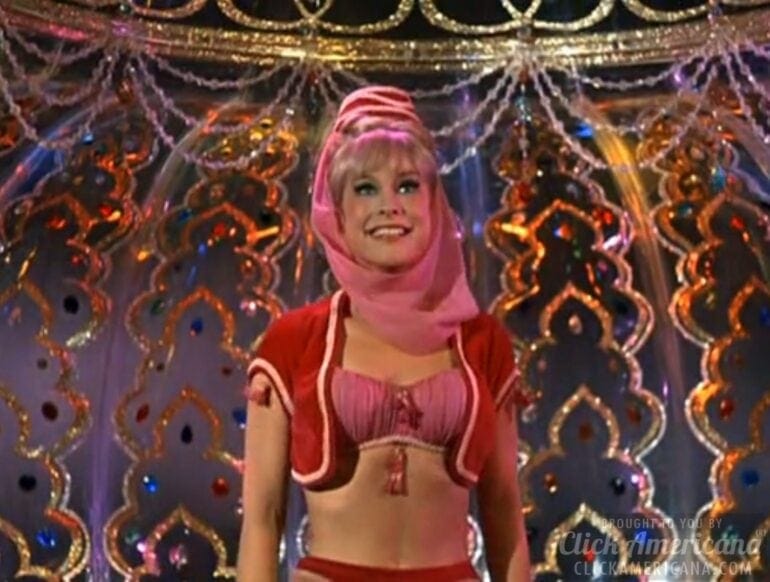 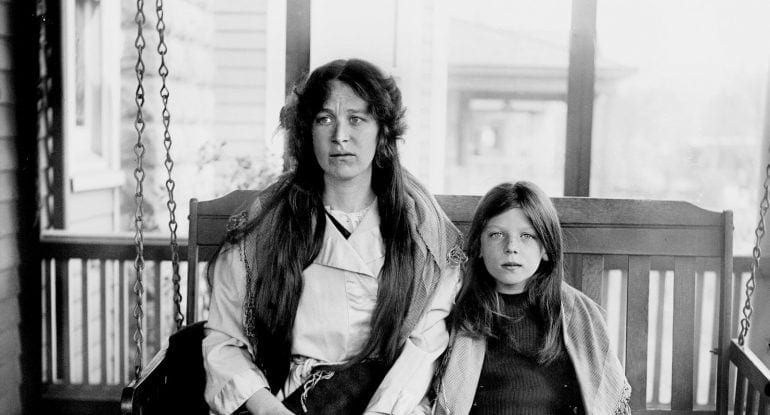 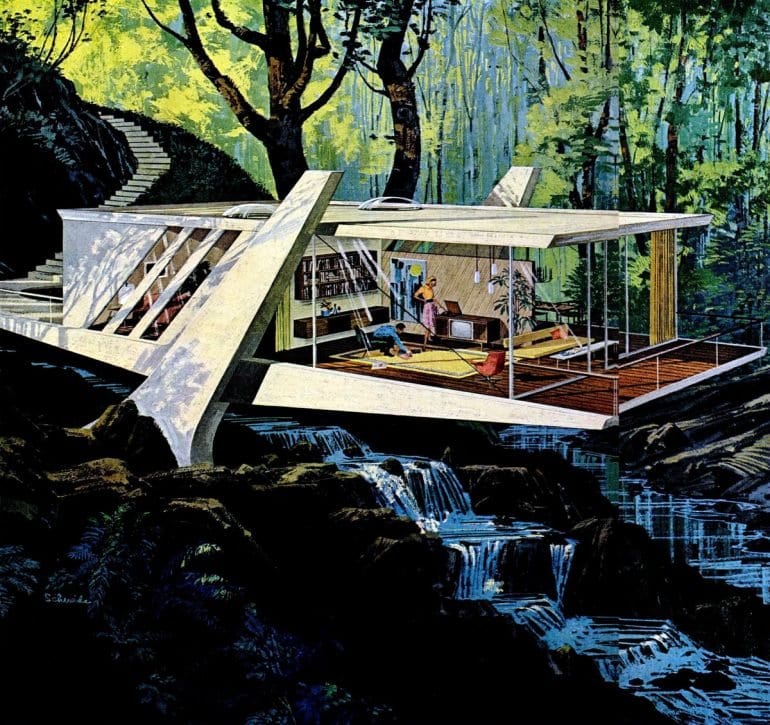