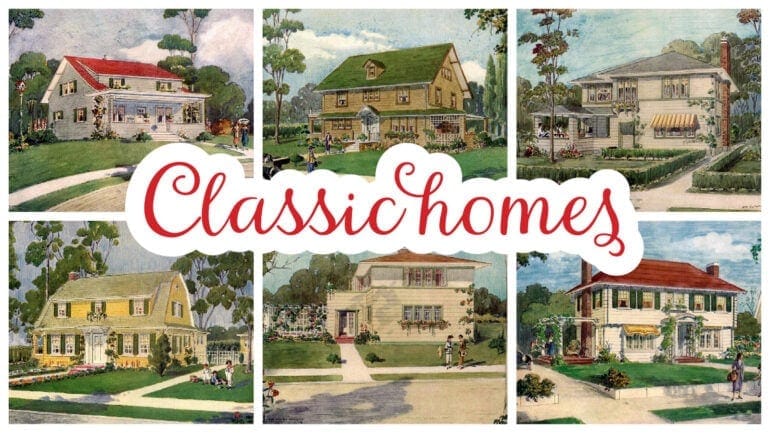 The last decade has witnessed an interesting development in American home life — a resurgent movement from the city to the suburban district and small town.

The automobile has been perhaps the chief influence in producing this exodus from the town, for by means of it the businessman of even moderate income has been enabled to exchange the close quarters of a city house or apartment for a suburban or country home with cool veranda, grassy lawn for the children to play upon, and perhaps a bit of garden in which he can exploit his own ideas as to the raising of beans and cabbages.

Half a dozen such homes are pictured [below]. Their charm is evident at the first glance, and a second reveals the fact that much of it is due to satisfying color effects; that is, to the skill with which the various houses have been painted so as to bring out the architectural value of each and to make the house at the same time an integral part of the landscape.

To achieve this initial result of beauty is the first aim in house painting. It depends upon two things — knowledge of color combinations, and selection of paints that will produce clear, soft tones. 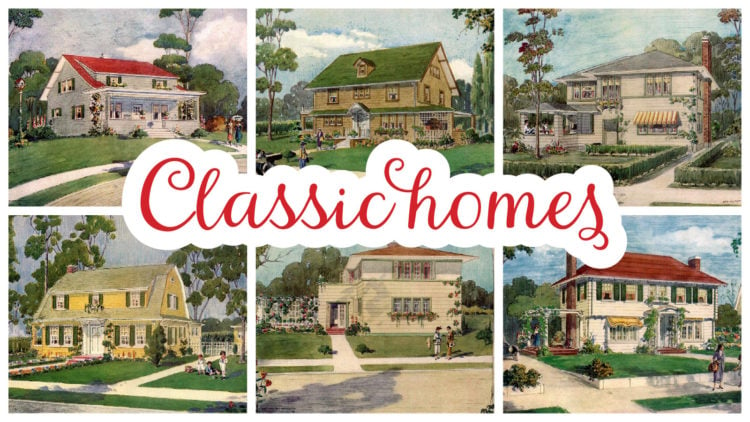 There is probably no style so charmingly adaptable to small residences as the Dutch Colonial with its gambrel roof. It is so “homey” and inviting, looking quite as well on a tiny lot as in a large area.

Then, too, it requires very little in the way of landscaping — just a few old-fashioned flowers, a small assortment of shrubs, a hedge or a bit of lattice and a charming setting for the house is the result.

The painting problem is equally simple. Keep the body quite light in color — yellow as shown, or pale gray or white, the shutters a green tone with deeper or grayer shade for the roof. The sash and lattice both look best in white.

Perhaps the chief advantage of this particular style of house is the fact that it looks so attractive placed near the street line, giving the owner, in consequence, the larger part of his property for a more intimate and sheltered garden.

The white entrance is so delightfully interesting the passerby is glad to have it near at hand. 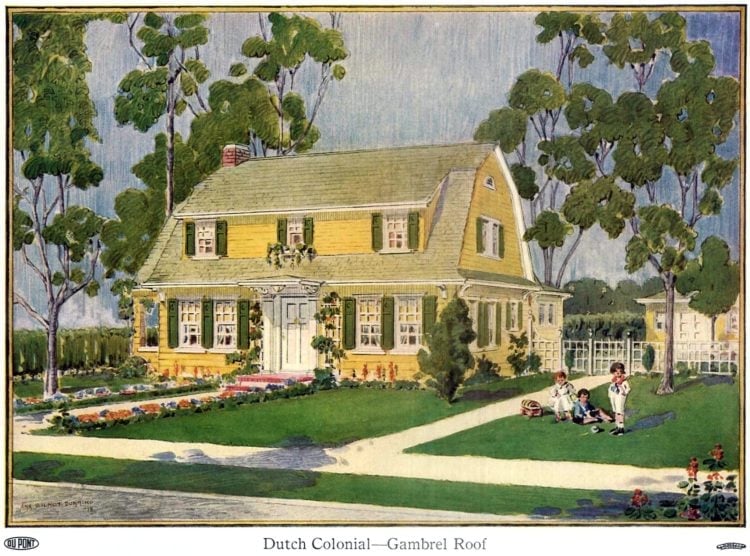 While originally, the name “bungalow” meant a one-story rambling building, it now applies in general to the small house or cottage — often a story and half story.

The design illustrated is admirable for suburb or village, having a wide porch extending across the entire house, which can be screened-in to good advantage.

The dormers, with the flower boxes on the porch roof, make a most attractive feature and the shutters give it just a touch of the Colonial style. The color combination of gray body with white trim is enhanced by the red roof and dark green shutters, and in a wooded setting, such as a bungalow so often has, is particularly pleasing.

The house requires no formal style of planting — the little bird-house adds interest — and the lattice ends give the porch additional privacy. As a whole, it is most charming, simple and homelike.

Shades of brown with white or green trim and a gray-green roof are also delightful in these surroundings. 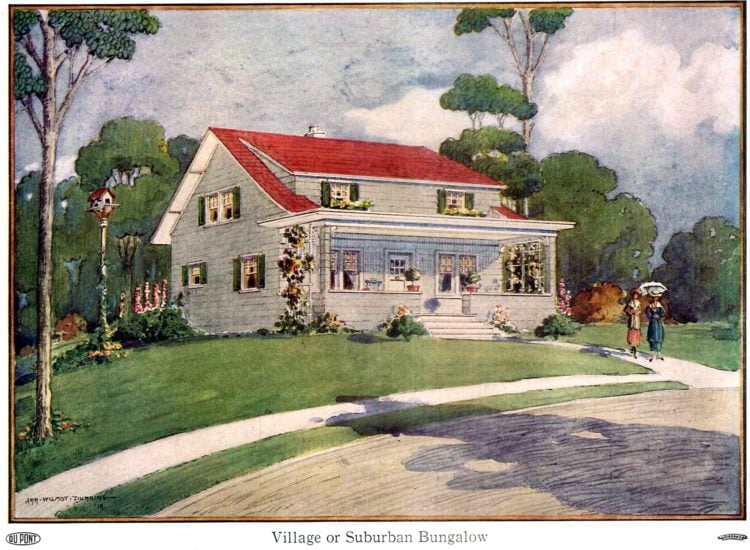 This gable roof design can be painted in a great variety of ways. Where the house is surrounded by much green foliage, the neutral drab and soft brown tones are very desirable, especially when a note of green is used in the roof treatment. The sash and entrance in white or cream makes a bit of snappy contrast which prevents the whole color scheme from being too somber.

Another pleasing and effective way of handling the problem is to use a gray body, with either deeper gray or pale green for the trim, cream for the sash and entrance with stone green for the roof.

This style of architecture, however, looks better in darker colors, as they have the tendency to cut down the general appearance of height which a gable roof usually gives. Much shrubbery, set close to the base of the house, is another important feature, as it not only has a softening effect upon the general severity of the design but further decreases the apparent height. 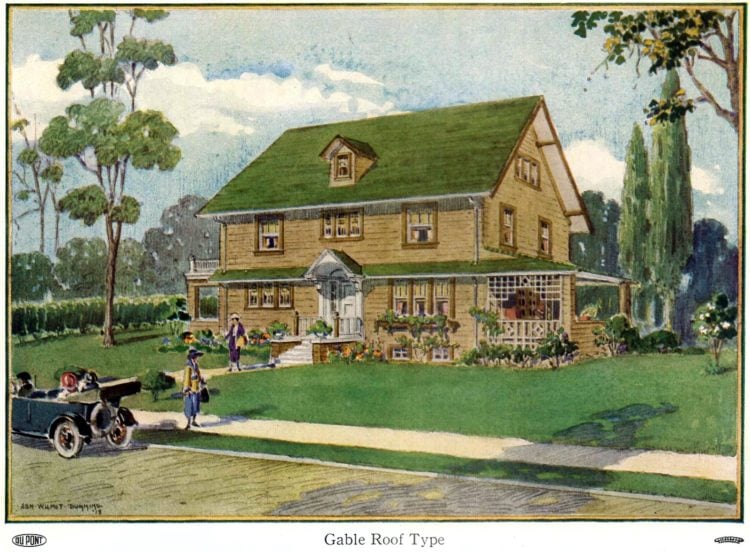 This design follows the lines of what is frequently called the “Frank Lloyd Wright” Type or “Prairie School.” With its gently sloping roof, simple skyline and sheltering overhang, one gets the effect of quiet and shade, even in a flat, prairie-like setting.

The small casements opening out under the overhanging roof seem so inviting and homelike, with a hospitable informality about them.

This type of house gives ample opportunity for color in quantities of vines and flowers, and the screened garden can be made to have all the charm of the Spanish patio. Soft cream, ivory and brown, with a bit of green in the trim, are delightful in the expanse of green lawn, and an excellent background for the bright colored flowers.

The entrance is simple and appealing — the terrace tile becoming the floor of the vestibule — while the whole design has the stamp of restful simplicity. 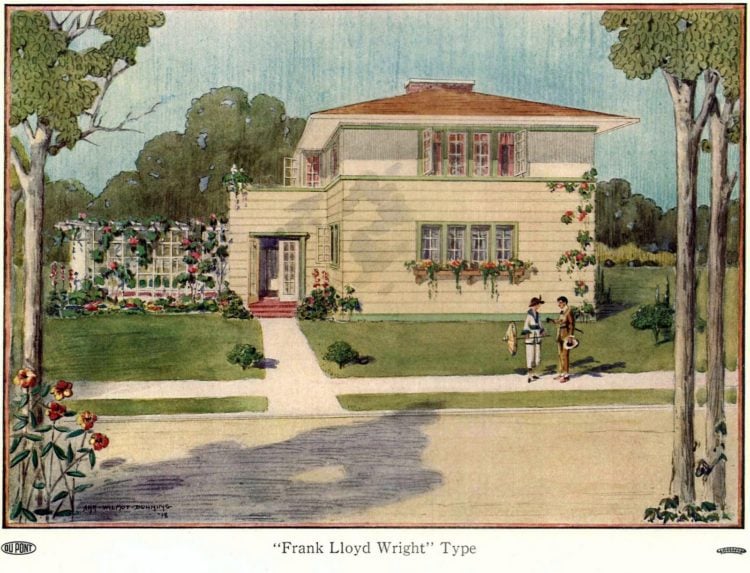 In painting this charming type of Colonial home, so frequently seen in both cities and small towns, simplicity is the keynote to observe in selecting the combination of colors. One is almost tempted to call it the “American Style,” so simple is it in line and plan, possessing a dignity in appearance that cannot fail to attract the passer-by.

When surropunded by luxuriant planting, it is really lovely and fairly exudes hospitality with its inviting terrace and general air of spaciousness.

In white, as shown here, amidst the varying tints of foliage, it is particularly striking with the red roof to lend it warmth and richness of color, while the dark green shutters tie the whole scheme into the landscape in a delightfully charming manner. The note of color in the brick of the entrance and terrace harmonizes with that of the roof and affords a rich contrast with the turf.

If, for any reason, white is undesirable, select a light shade of gray or soft cream for the body, white for the sash and a soft olive for the roof with shutters in a brighter shade. The lattice may be treated in same manner as the roof. 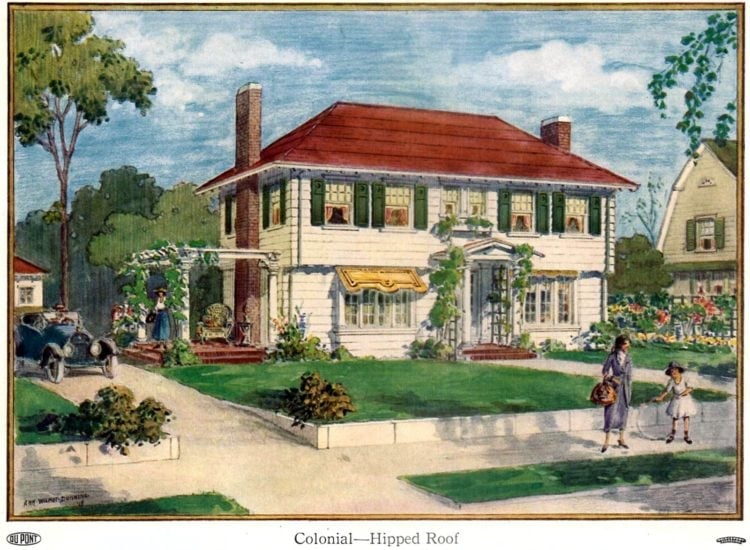 This type of home is frequently found in the Middle West. It follows no established architectural style, but its straight lines are dignified and well proportioned. The arrangement of windows, combining the casement variety with the double hung, makes an interesting break in the facade while the simple entrance vestibule is quite distinctive.

The roomy porch, although near the street, has all the requirements of privacy with its ceiled rail and gives the whole house an appearance of size.

An arrangement of gray tones suits this style admirably, just enough color in the green stone trim to keep it from being too cold, while the bright-colored awning and the vines contribute a real splash of warm color in the way of decoration. The box-hedge conforms to the general design of the house and makes a splendid setting for it, needing little else in the way of shrubbery.

Should this color scheme seem too cold for some locations, light buffs with neutral browns and drabs make an equally attractive layout of color. 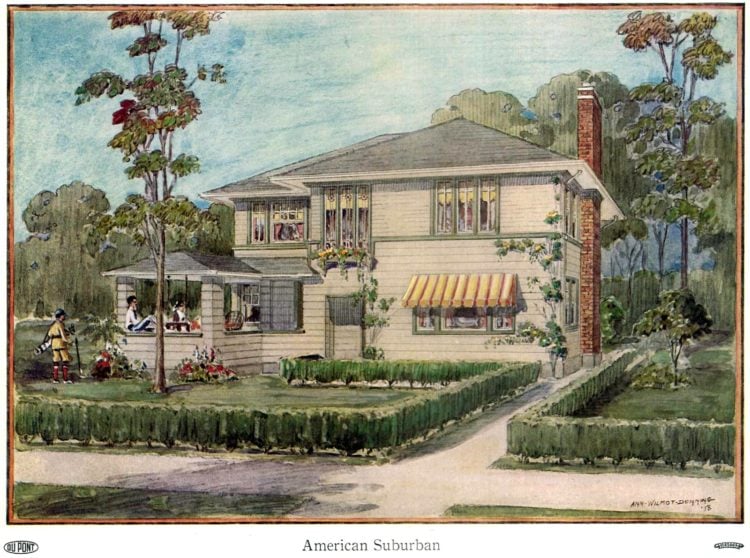 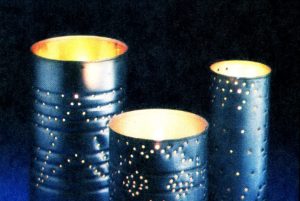