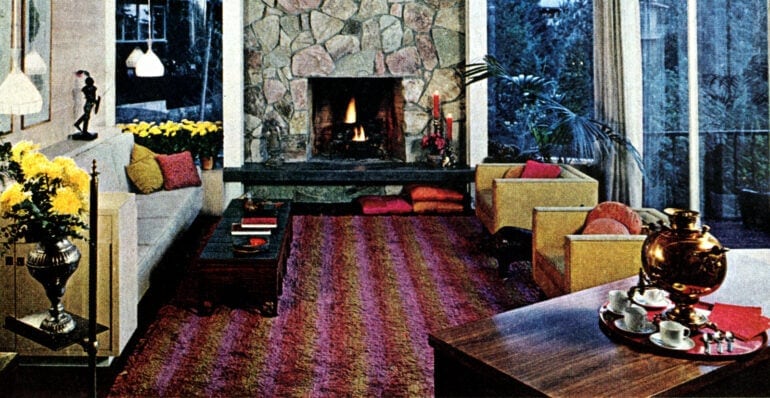 Famly of 5 used an architect to express their young ideas

The Dupens — Jack, Quina, and their three children — were described by one of our West Coast staff as “togetherness without stickiness. They are self-sufficient and an extremely close-knit family.”

Their house expresses all of that, plus the venturesome quality that launched them on a career quite different from those for which they were trained.

Husband and wife began their entertainment career as a college hobby, went on to make it a way of life, and continue to work as an entertainment team. As we mentioned, their working hours being at night, they have lots of daytime hours in which to enjoy their children. The house reflects that too.

Allen Fong, the architect for the house, is a friend of Jack Dupen, dating back to high school days. He says, “The Dupen’s wanted a dramatically different roofline, hence the truss roof.

“As I was designing it, I imagined them in the house. They wanted it comfortable, of course, but with a distinction, a joyousness… and with the children and their recreation very much in mind. The site was exposed to the wind so we had to design a house to protect the swimming pool and deck area, two of their ‘primary request’ spots.”

This house glows with light, from huge windows and clerestories, by the use of amber glass set into the front doors to give “sunshine” even on cloudy days. That same mood is carried out in the interior design by Dennis Redmond.

Here the roof line becomes a primary element of the interior, the door with its amber panels, and the understated planting; pine, camellia, pittosporum and juniper (in tubs), magnolia (right) with juniper ground cover. 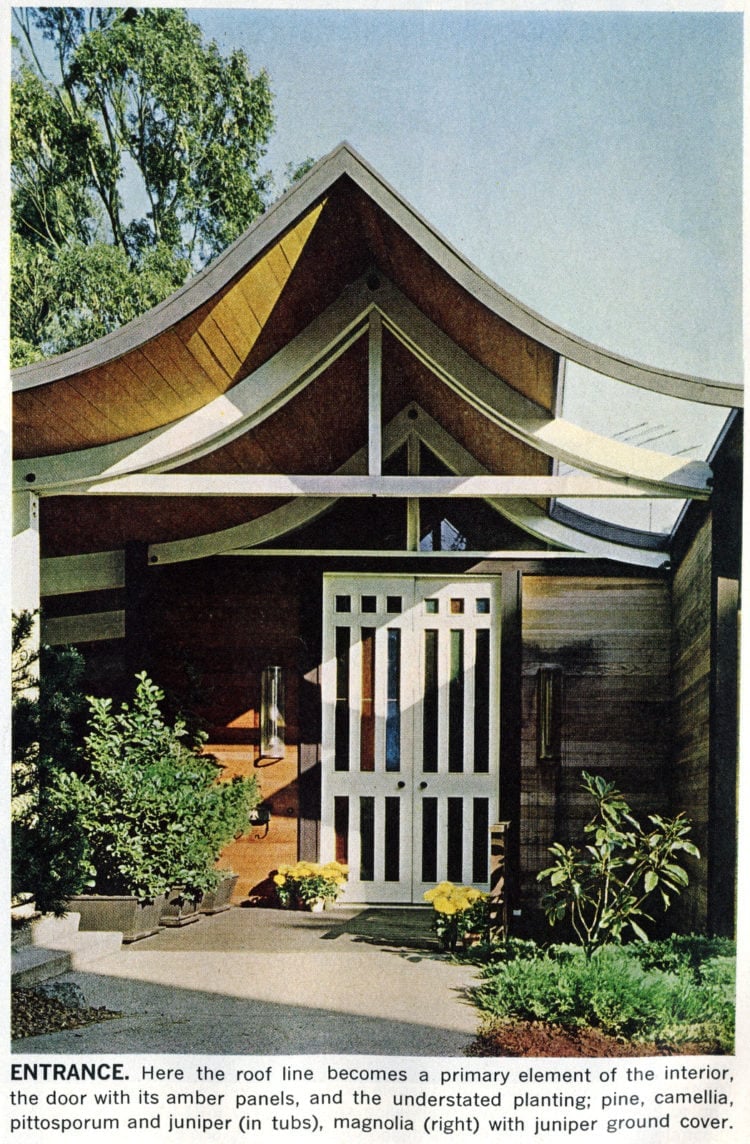 A mid-century modern home design from 1965: The living room

Living room has walls of Douglas fir with white pigment rubbed on, plus a sealer. This softened white look with the large window areas fills the room with a light feeling day and night. Sofa, coffee table by the architect and designer. 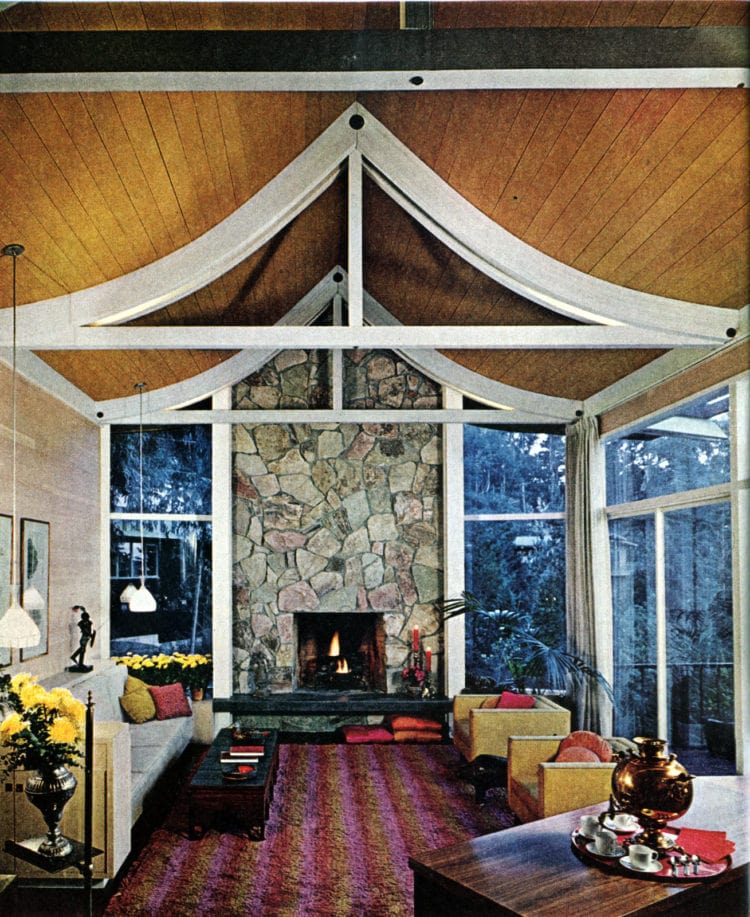 Family room, but for real… a constant center for playing children. All toys belong, are loved, used, particularly the lion rug.

Grownups also party here; there’s a player piano out of sight and a second kitchen. 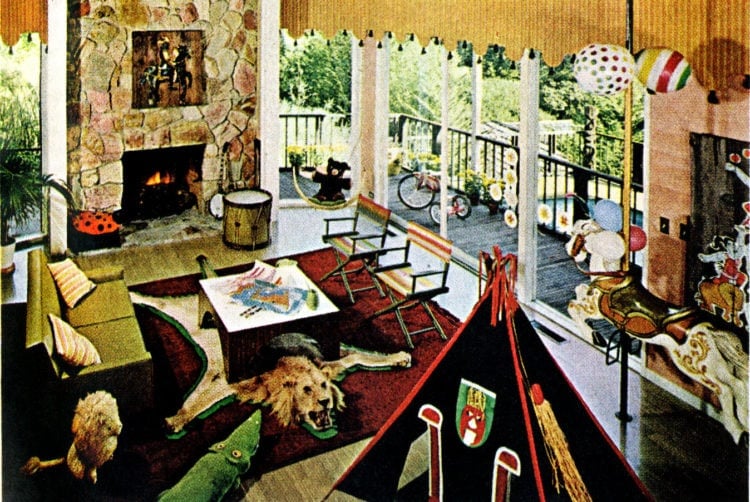 The small, steep hillside lot allows only this space for a level family play area. There’s a wide deck for sitting, raised gallery deck for access to wings of the house.

The ramp that links that deck to street gives a gated racetrack for the boys on tricycles. 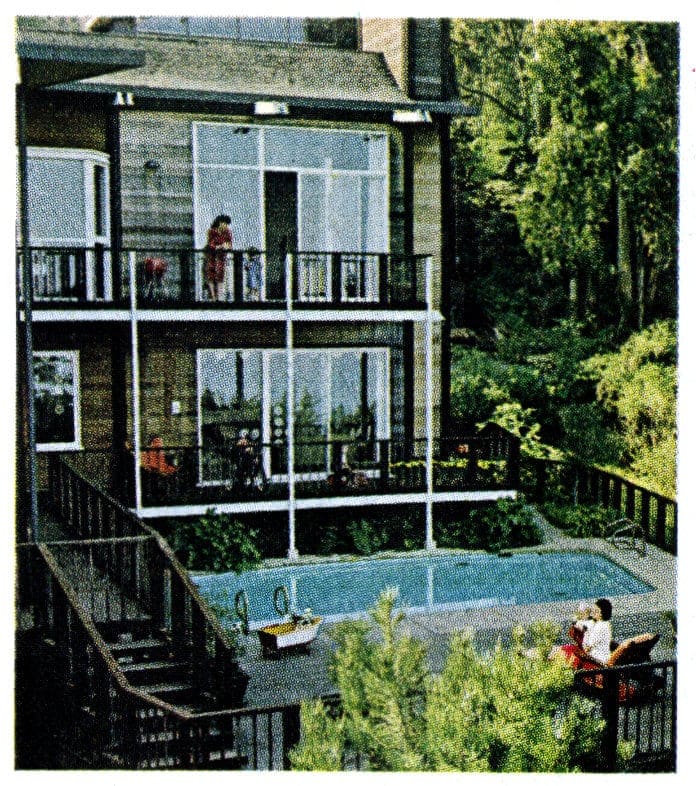 A mid-century modern home design from 1965: The master bathroom

Master bath is tiled in a wonderfully inviting shade of blue. The plants, that large cutleaf philodendron in the back, the ferns over and on the ledge of that delightful sunken tub, the Dieffenbachia, add to the almost outdoor look of the room. Here indeed is a room that invites leisurely, lingering, luxurious bathing. 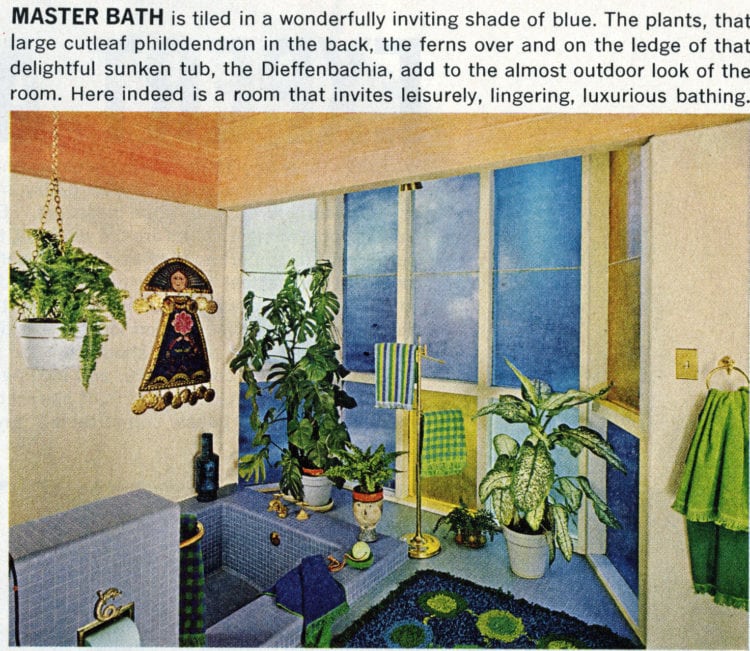 A mid-century modern home design from 1965: The house’s floorplan

The two levels. Notice the location of the dining area, the bedrooms, the useful auxiliary kitchen and bar off the family room.

Tremendously functional, the plan served the needs of this family who really live and play together. 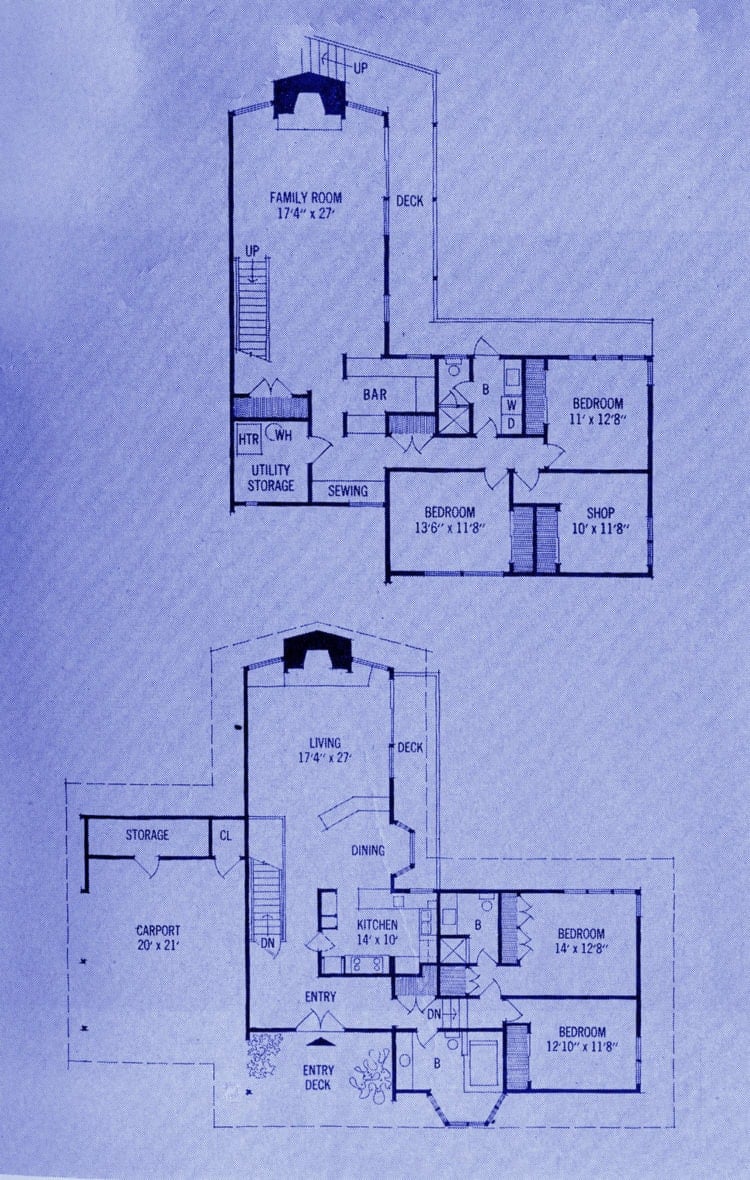 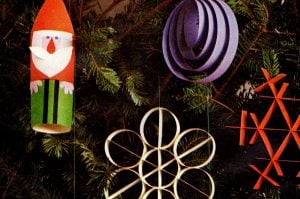 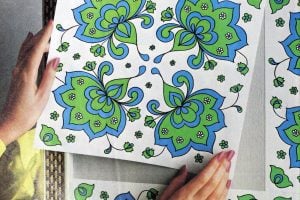 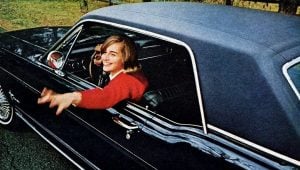