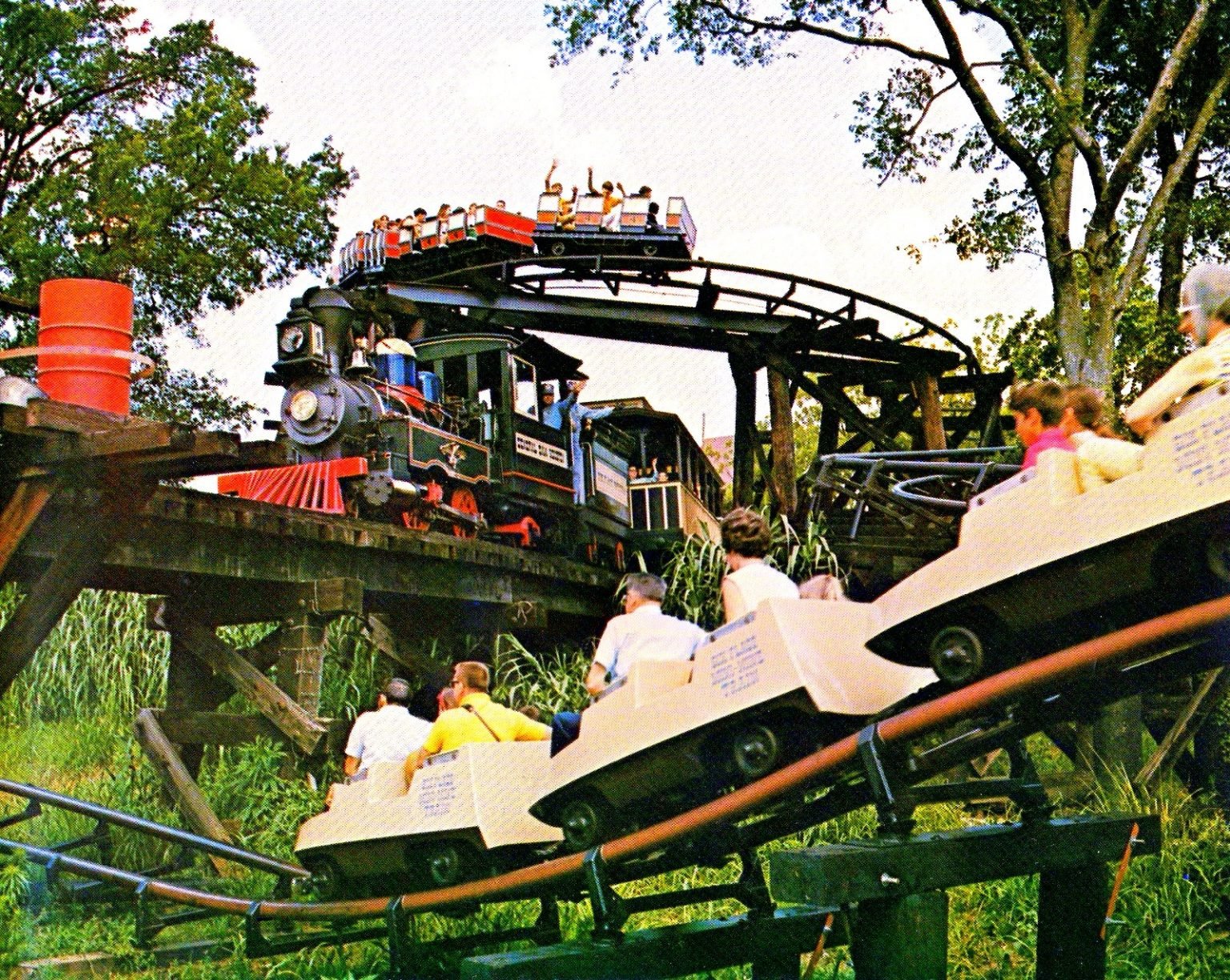 You never get enough of Six Flags!

No matter how often you go, the thrill is new. From the wild wet plunge of the Log Flume to the breathtaking heights of the Oil Derrick, there are 85 ways to get a Six Flags thrill. Including the spectacular new Jet Racer and five completely new shows!

No matter how much you see and do, there’s more. Delicious food, ice water fountains, and shady rest spots keep you refreshed. 1500 young hosts and hostesses keep you happy. And the clean natural beauty, the romantic aura of history keep you coming back.

Ten magic years, and still the fun goes on. That’s why Six Flags is Texas most popular single tourist attraction — 2 million visitors each year. The one-price ticket still covers all, all day and into the night.

Six Flags is open weekends Spring and Fall, every day in Summer. But you’ll never get enough. Send us the coupon, we’ll send you a brochure with map, schedules and details.

Six Flags over Texas – Dallas/Fort Worth

ALSO SEE
See what Disney World in Orlando, Florida, looked like when it first opened in 1971

Cattle once roamed the banks of Johnson Creek, the lazy stream which meandered near the fence line of the legendary Waggoner DDD Ranch.

Today a multi-million-dollar family fun center — Six Flags Over Texas — brings some two million people a year to that strip of pastureland.

The natural beauty of bygone days has not only been preserved, but enhanced by a costly investment in landscaping. The lavish landscape sets the scene for enjoyment of one of the nation’s best-known theme parks. 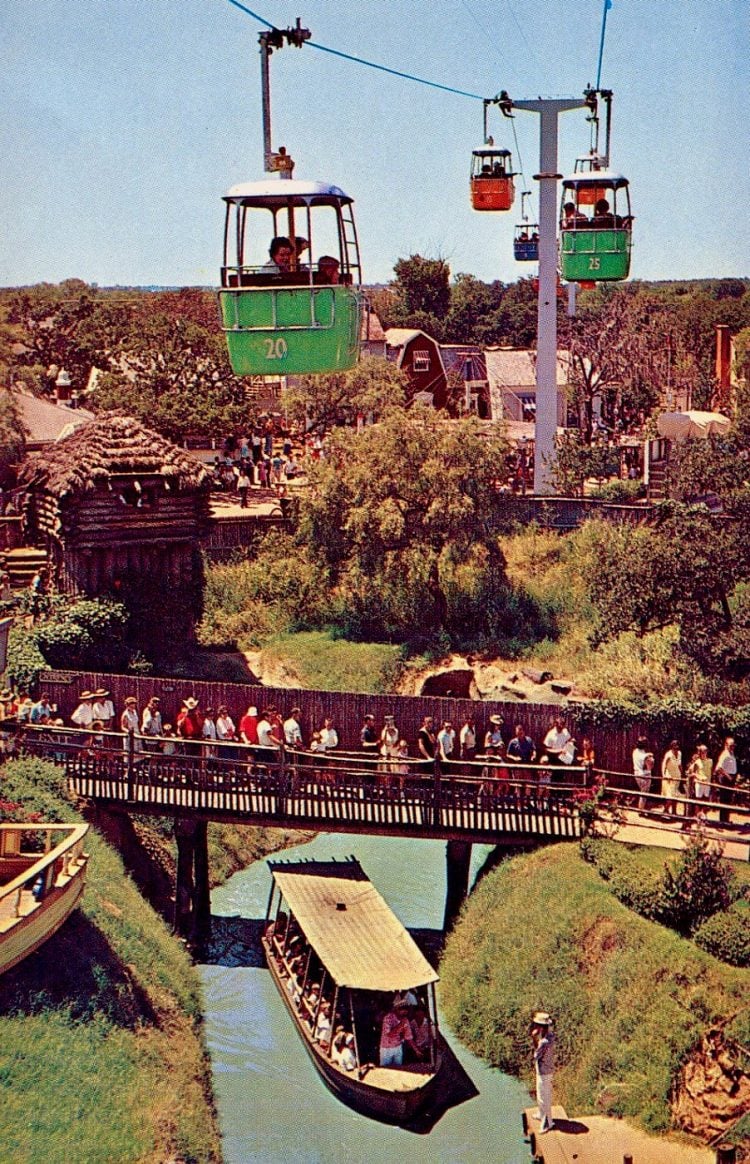 Six Flags’ founders saw the DDD Ranch as an area ripe for recreational development. Its lo-cation, exactly midway be-tween the bustling cities of Dal-las and Fort Worth, made it a “natural” for such a project.

In the Fall of 1960, Six Flags Over Texas began taking shape. The new park was based on three principles. It would have a unique and wholesome atmosphere. It would be kept immaculately clean at all times. And, it would be staffed primarily by bright, young college students.

The Park’s name was derived from Texas’ history. Six Flags have flown over the Lone Star state. It has been claimed as the territory of Spain, France, Mexico, the Republic of Texas, the Confederacy and the United States.

At first, the name was to have been Texas Under Six Flags. But, as one of the parks planners put it, “You know how we all feel about Texas, and Texas ain’t going to be under nothing.” Thus it became Six Flags Over Texas. 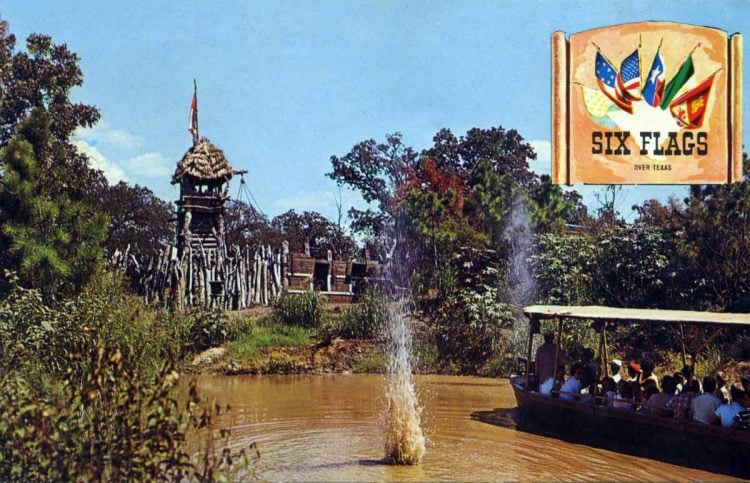 Before a spade of earth was turned, a year was spent in study, planning and research. A complete woodmill was shipped from New York. And design experts and artists began turning out sketches of the historically-accurate buildings which would give each of the six sections of the park its flavor.

ALSO SEE
Disneyland brochure for 1988: More than ever the happiest place

Those sketches were redrawn on huge pieces of cardboard that were the exact size of the facades of the buildings. The drawings were shipped to Texas by rail, and carpenters at the woodmill began cutting lumber to conform to the sketches.

The buildings, prefabricated in the mill, were put into place as land was made ready. Beneath the surface lay a maze of wires, pipe conduit to carry the electricity for brillant lighting displays, the water for lakes and waterfalls and the sounds, which gave each section a distinctive atmosphere. 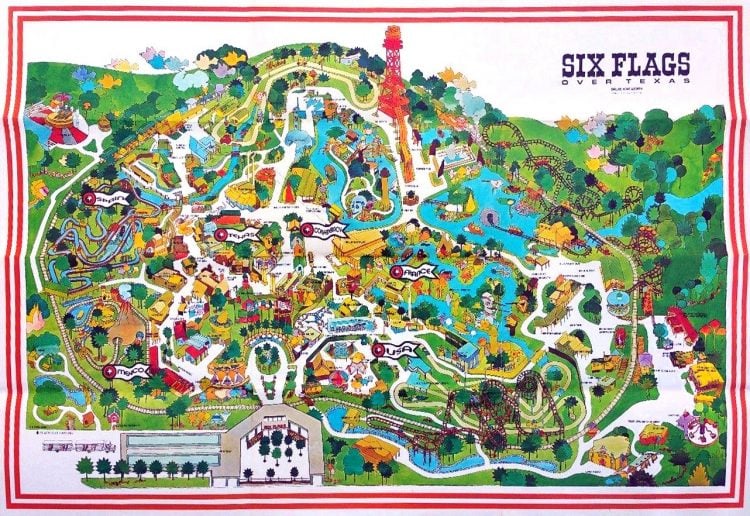 In a little less than a year, 400 construction craftsmen created a “wonderland” on the shores of Johnson Creek.

Six Flags Over Texas opened to the public on August 5, 1961. Since that time the Park has grown steadily. There are now more than 85 rides, shows and attractions at Six Flags — more than double the number in 1961.

What started as a modest, but imaginative plan for a strip of Texas pastureland has grown into one of the world’s largest and most successful recreational enterprises. 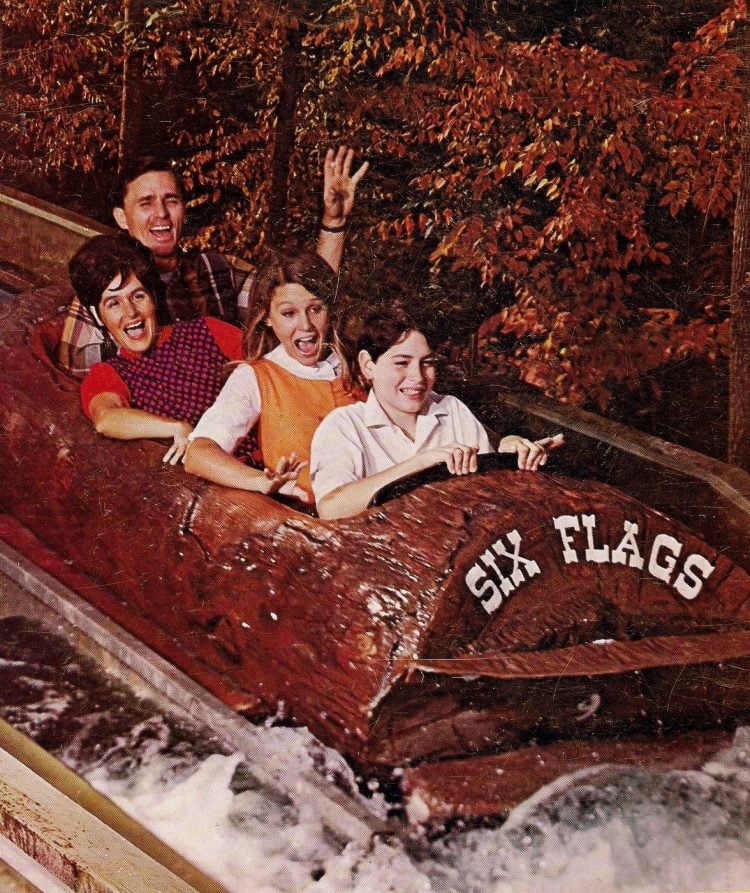 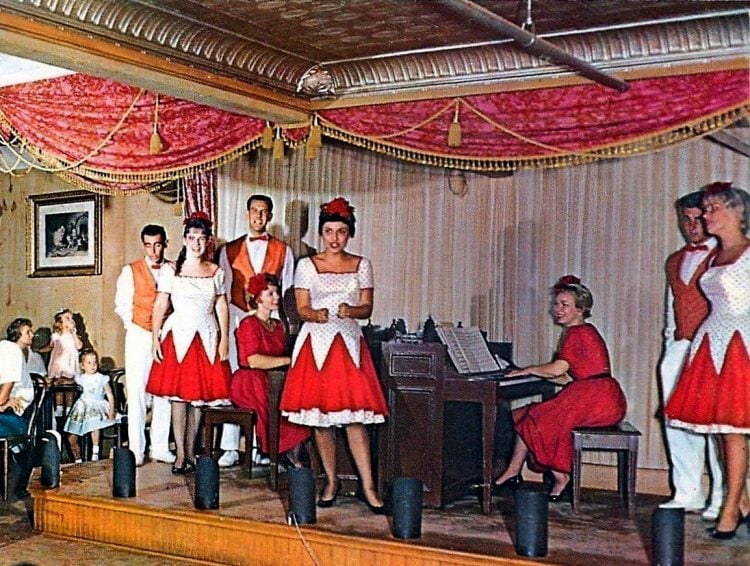 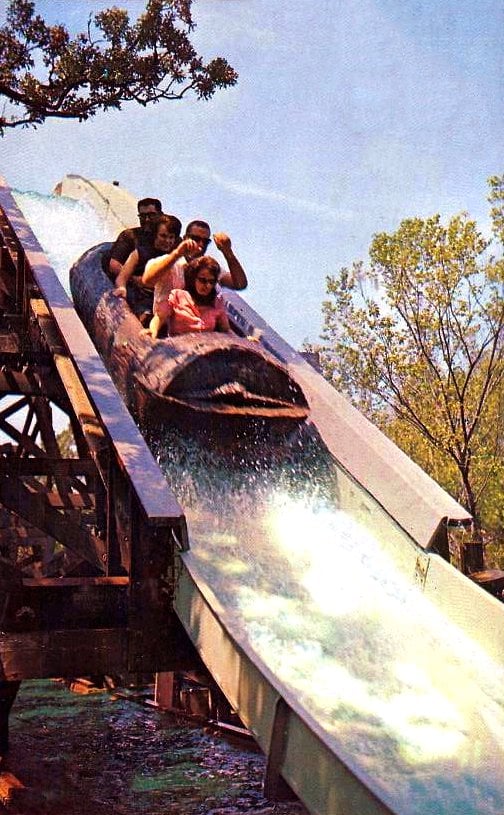 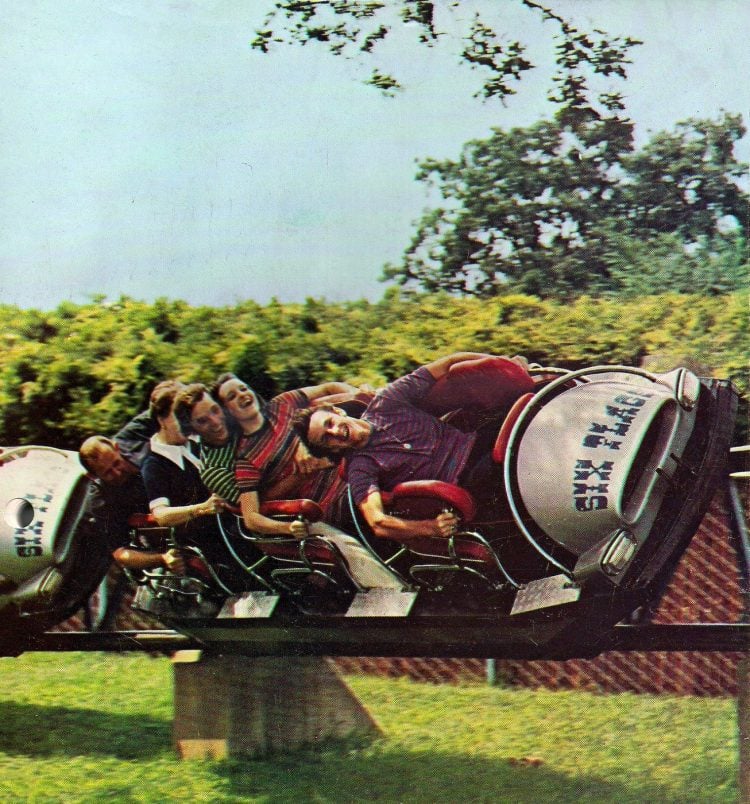 ALSO SEE
Vintage Busch Gardens: See the theme park in Tampa, Florida through the 20th century
If you liked this, please share it! Our small business appreciates it. :-) You can also get our free newsletter, follow us on Facebook & Pinterest, plus see exclusive retro-inspired products in our shop. Thanks for visiting! 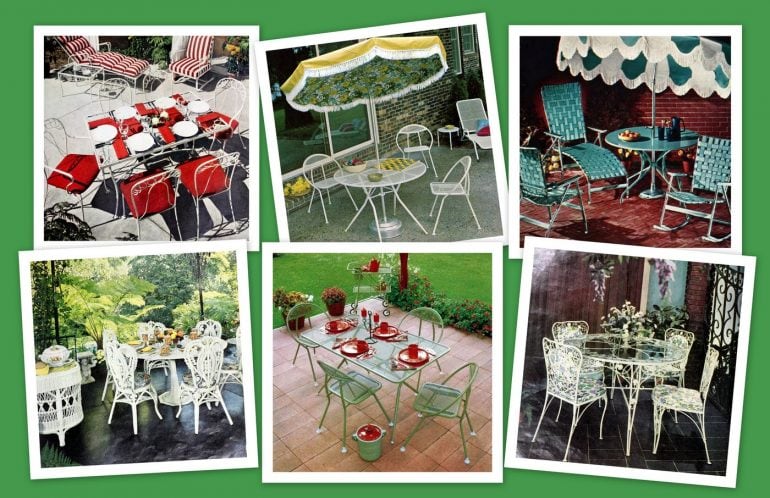 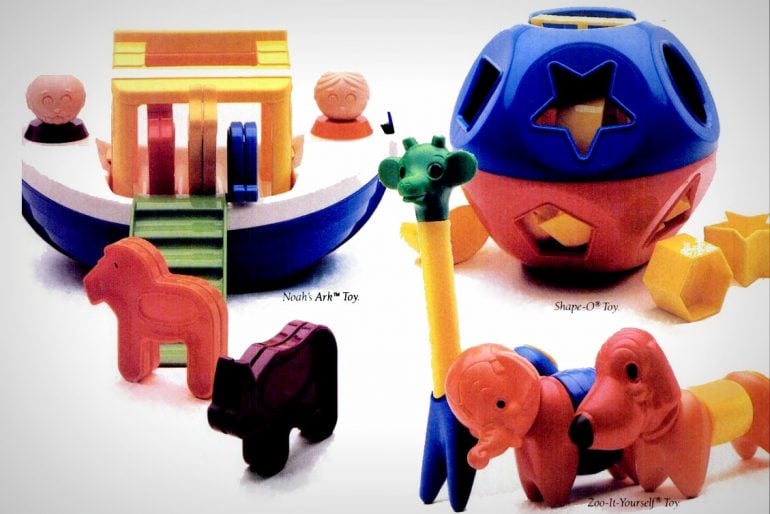 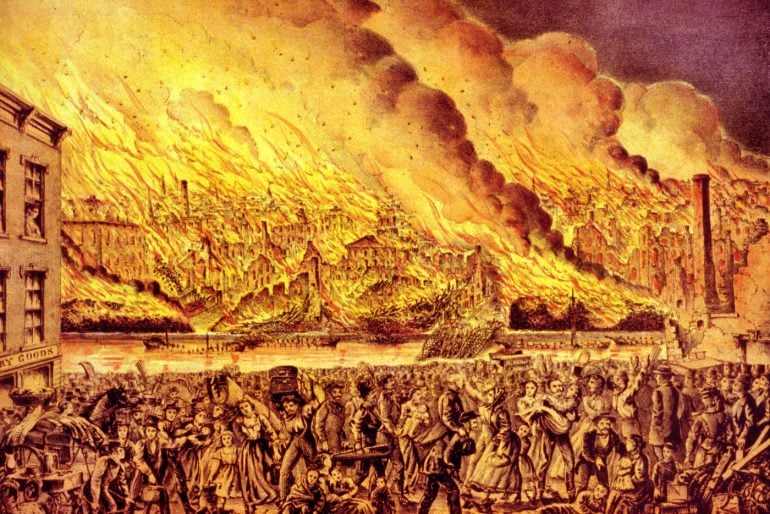 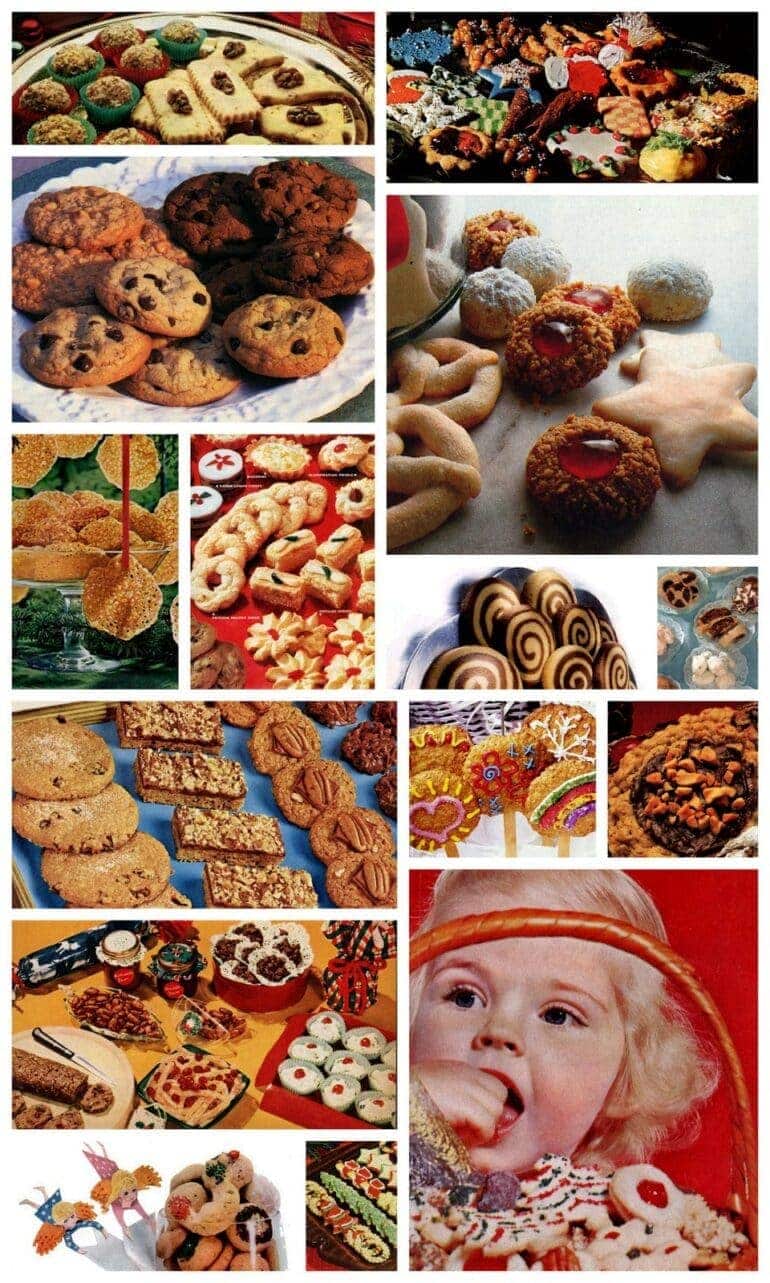 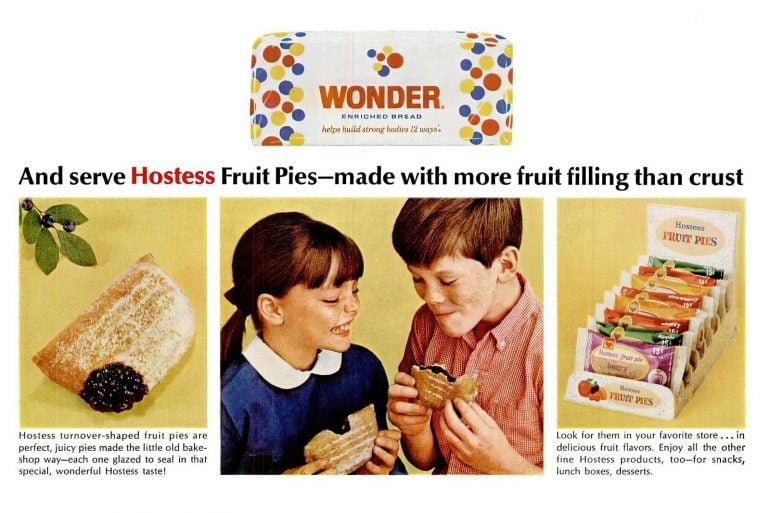 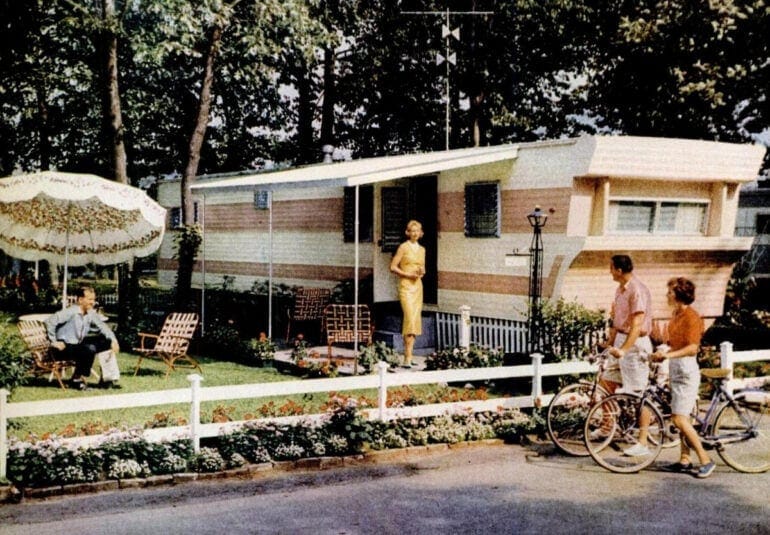 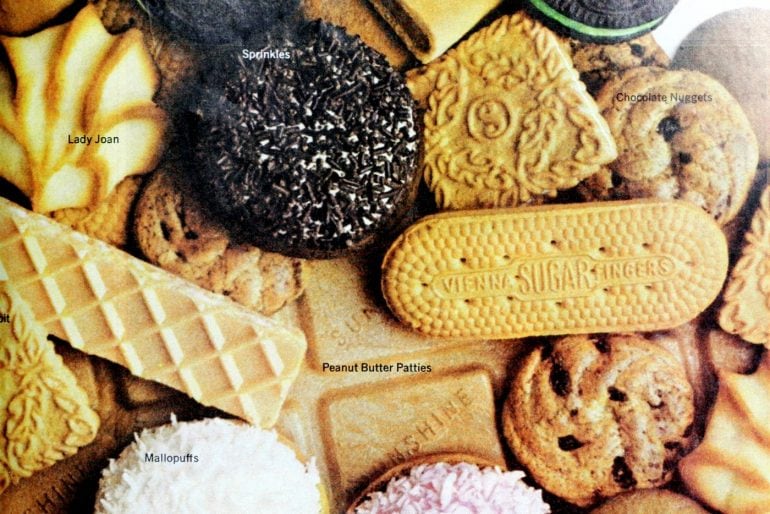 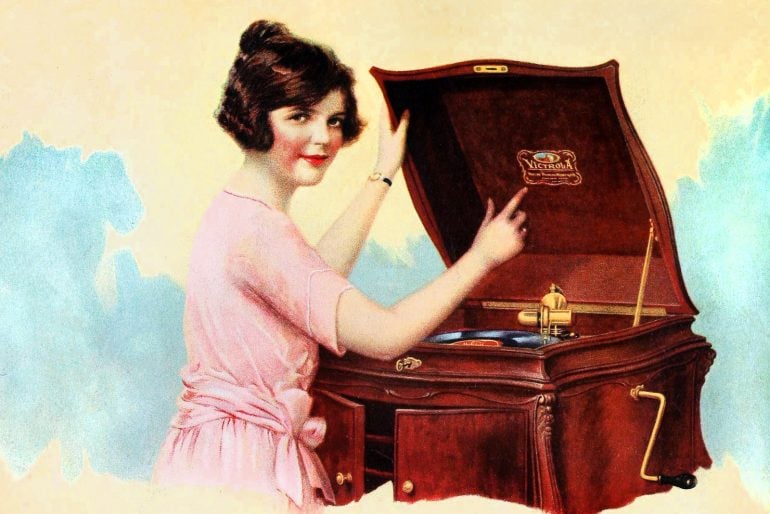