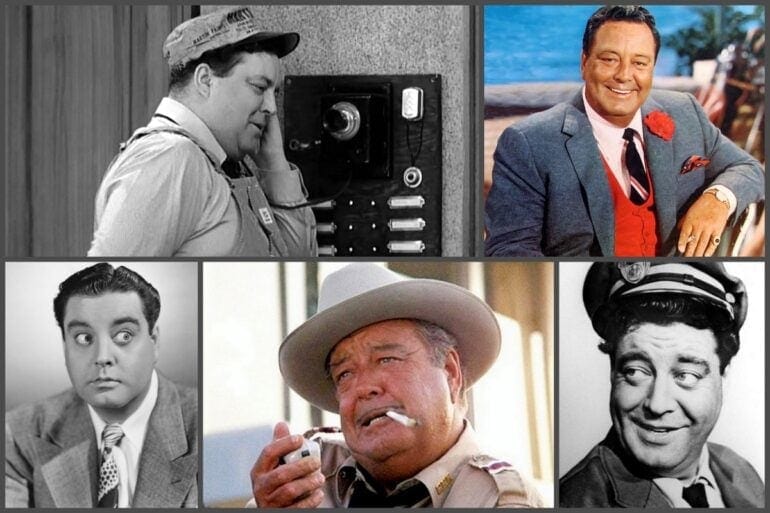 Late in his life, fans were treated to his portrayal on the big screen of Burt Reynolds’ nemesis Sheriff Buford T Justice in all three Smokey and the Bandit movies. 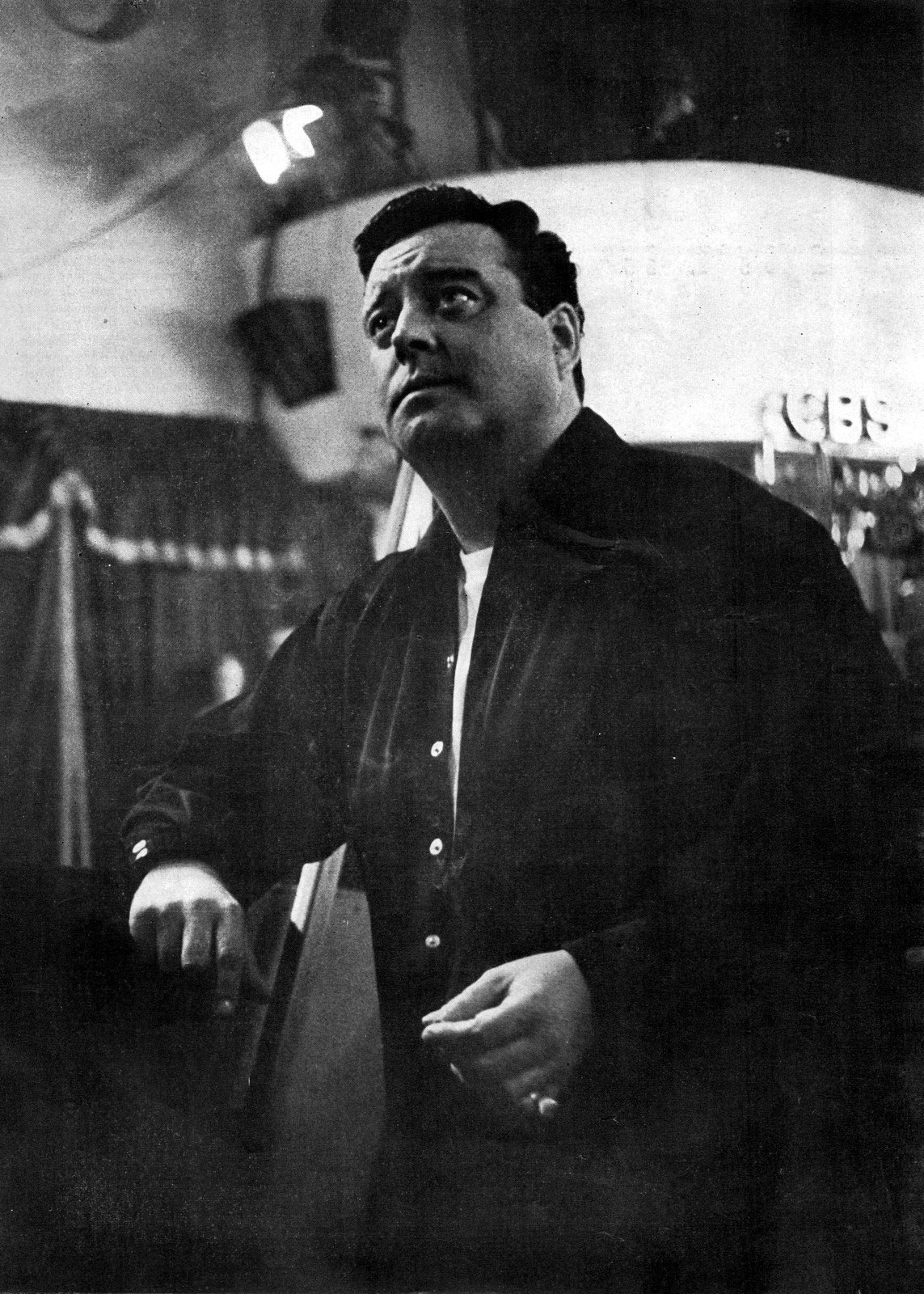 MIAMI BEACH — Jackie Gleason was sitting at his desk in the luxurious office and rehearsal quarters called “The House That Jack Built” at the Miami Country club — having a booze.

“HEY, SYDELLE!” he roared to his secretary, Sydelle Spear. “Some booze for our guest!”

Jackie’s manager and partner, Jack Philbin, came in. “Are you ready for this?” he said. He read the latest ratings, showing Jackie far ahead of the competition and among the nation’s tops.

“I feel so sorry for ‘Flipper,’ I’m sending him some shrimp!” Jackie wagged his head happily.

For he is a very, very happy man now, and the problem of Miami Beach’s publicist Hank Meyer, who got him down here, is to keep him happy.

They have a new five-golf course country club in the planning stage … in addition to Jackie’s endeavor as “creative consultant” for the new Statler-Hilton-Savoy hotel, which will have at least five public rooms named for Jackie Gleason.

“Five golf courses?” I echoed. “Two more than anybody else has,” somebody said.

Jackie’s life is like that now. His new deal with CBS is another financial record-setter. “I’ve never worked for less than the biggest money ever paid in that field,” he said. “CBS has asked me not to tell how much because the other actors will get angry. They’ll get angry about this!”

He’ll be 51 on February 26, and somewhere around that time, he’ll be signing the new contract, providing for 20 programs he’ll be in. 20 that his company’ll produce, and 10 repeats, for next season. There will be pure gold for his Peekskill Enterprises. Still, Jackie claims not to care for money.

“I never saw a buck throw its arms around you when you came home at night,” Jackie said.

“That’s right,” Jack Philbin said. “I never saw anybody have such a disregard for money.”

“I have a disregard for money –but not a disdain!” Jackie laughed.

“SYDELLE!” He looked at me, still with my first drink. “Yellowbelly!” he sneered.

“In TV,” he said, “you can make more in 20 minutes than you can make all year in Hollywood.”

Jackie’s enormously pleased with the musical version of “The Honeymooners” which brought him back to the top. 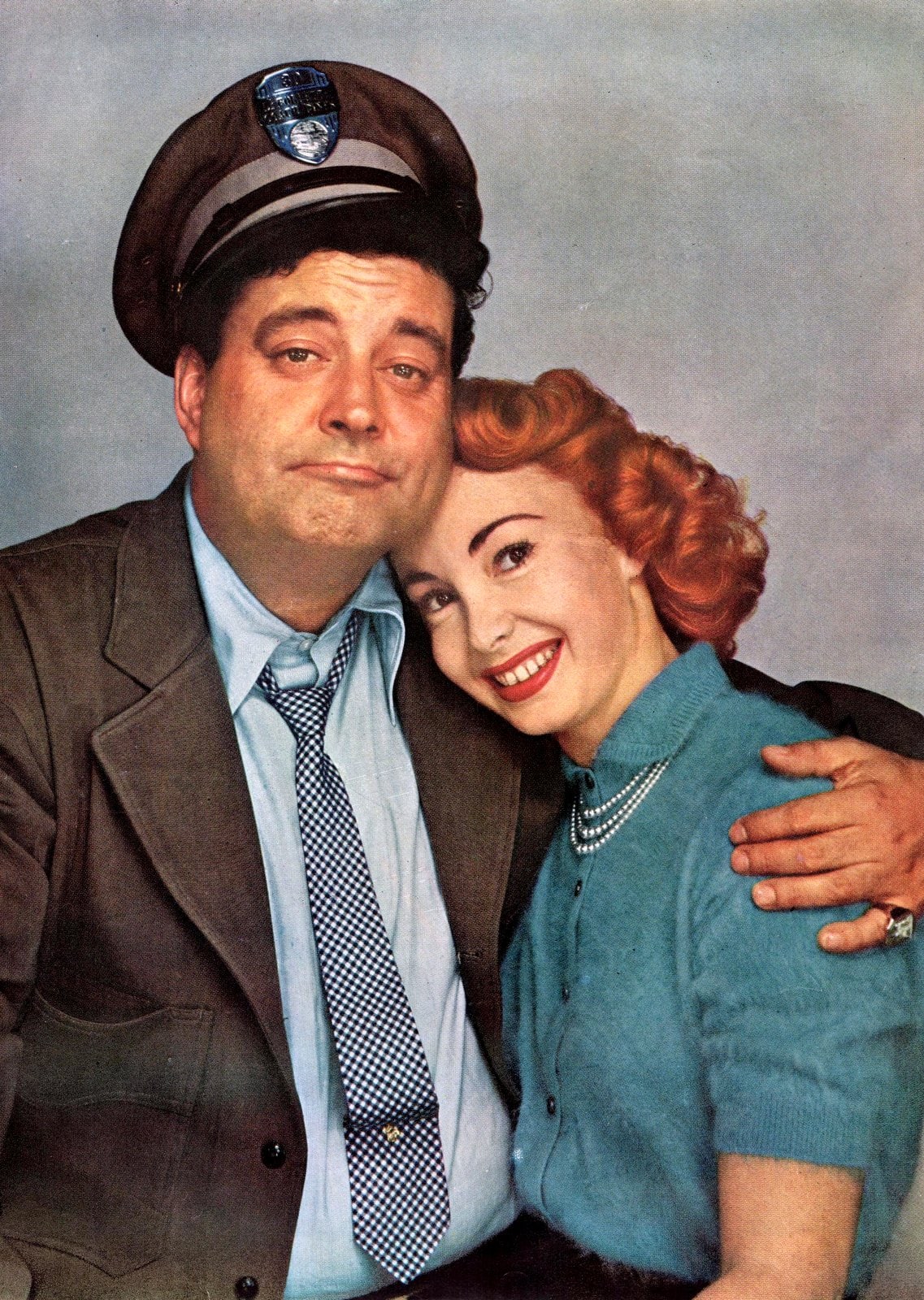 “We do every week what they can’t do in a year on Broadway — a successful musical,” he said. “But the fact it’s successful doesn’t make it any easier. I still have to memorize my lines.”

Gleason’s been on TV since 1948, when he did “The Life of Riley,” with Rosemary De Camp playing his wife.

“They wanted a big star and when he was available, they got Bill Bendix, who was a big star in those days,” Jackie said.

He went into “Cavalcade of Stars.” The first show had him playing a hatcheck room attendant. “It was accidental,” Jackie said. “The door stuck on me in the hat-check room, and I had to dive over the top of the checkroom to get out, and dive back over it to get into it. That was the beginning — all an accident.”

Few people remember that Jackie was also in a TV series which lasted one week. That was “You’re in the Picture,” a game show.

“We laid a bomb,” Jackie recalled. “I said, ‘The only thing to do is to talk to the public and say “We laid a bomb.’ Through the cooperation of Oscar Katz of CBS, who had a lot of guts, I was allowed to do it.”

One wonders if Jackie might finally get an Emmy this year. He’s never made it up till now. Jackie wouldn’t say he’s not interested, though he did say to me, “Of all the trophies, I think the best one is a contract.”

They called him “the Great One,” a nickname that was as grandly excessive as the man himself. Jackie Gleason, who died last week [June 24, 1987] of cancer at 71, was a big drinker, a big spender and a big fellow (his weight at one time topped 280). Exuberant and gregarious, he addressed nearly everyone he met as “pal.”

During the 1950s and ’60s, he was one of the most popular and highest-paid stars on TV, yet his talent extended to Broadway (a Tony Award for the 1959 musical Take Me Along), movies (The Hustler, Soldier in the Rain) and pop-music composing and conducting.

“If I didn’t have an enormous ego,” he once said, “how in hell could I be a performer?” 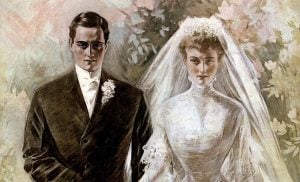 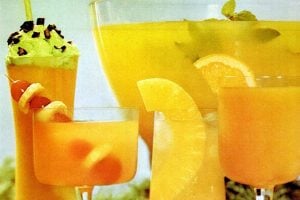 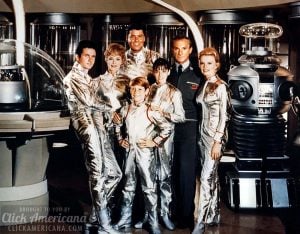