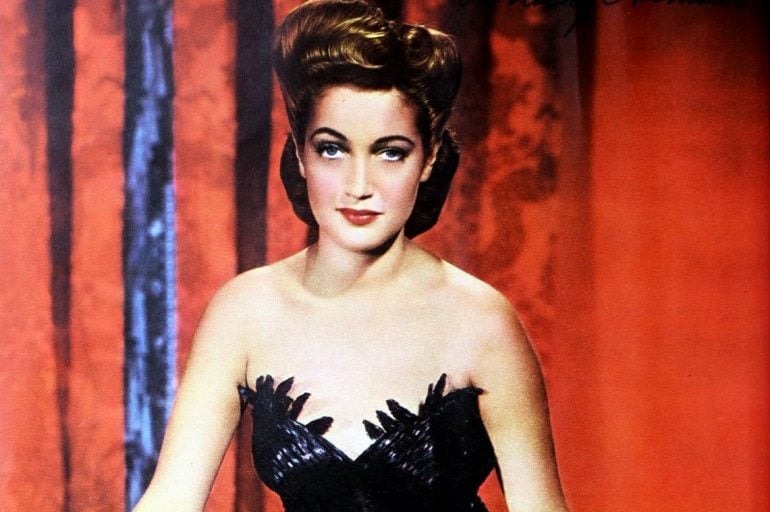 Dorothy Lamour (1914-1996) the famous American actress and singer most popular in the 1940s, wasn’t just a star on the screen — she also threw her weight behind numerous WWII war bond sales efforts, and handily topped those charts.

Madison Square Garden was packed to the guards. It was the final night of the thirty-day stretch of bond-selling for Stars Over America.

An A.W.V.S. escort carried Dorothy Lamour and her party safely through to the section where the stars were lining up for their stint on the great platform. I, as your reporter, was there with Dorothy to tell you firsthand what happens to a star selling Bonds. 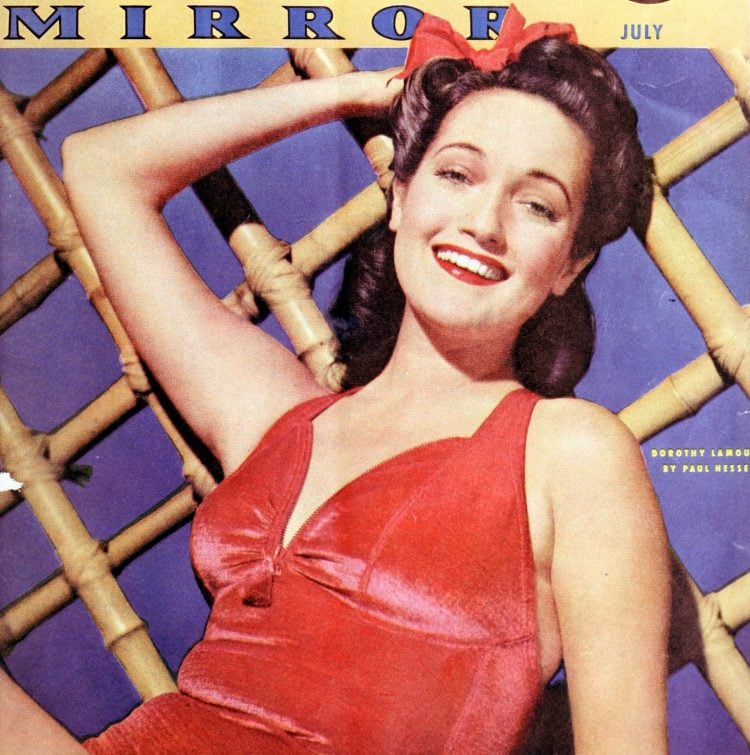 And as Dorothy stepped across the giant stage the crowd gave a long and appreciative whistle. The selling began and wound up with Dottie minus one more sarong to the tune of $10,000.

As she stepped down from the platform into the teeming crowd, I said to her, “After this, you’ll have to rest up in a hospital.”

MORE: The truth about Hollywood draft deferments during WWII (1942)

Just begun! After twelve days of whirlwind Bondstorming in which she made a hundred and five speeches and sold in excess of $35,000,000 in Bonds! After having been the one herself to start this whole gigantic campaign of stars as Bond salesmen to America!

For it was Dorothy who, just three days after the Japs bombed Pearl Harbor and the Honolulu she loved, pointed the way single-handed. She couldn’t carry a gun, but she did have a name. She’d make that name help Uncle Sam sell his all-important Bonds. 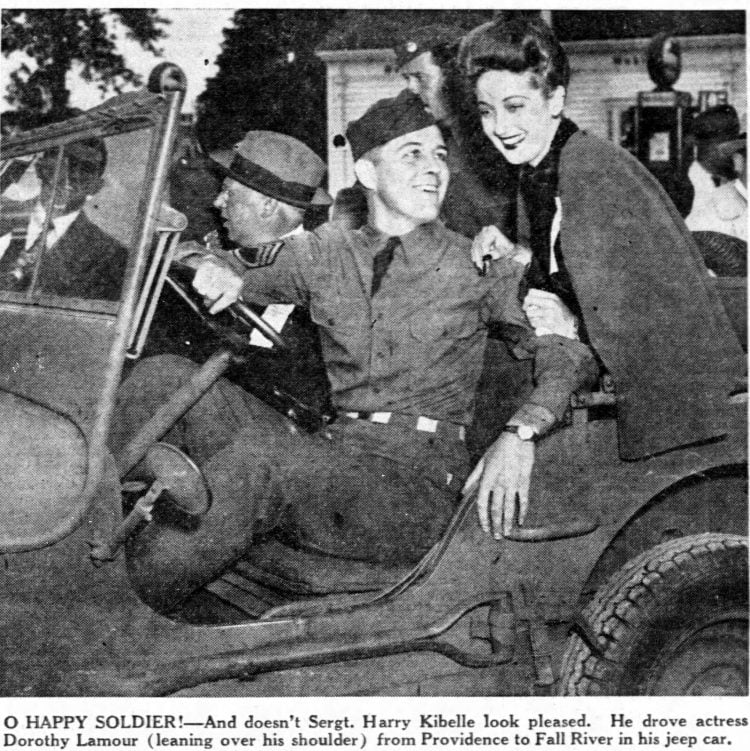 The evolution of this new person who was once Dorothy Lamour, the sarong queen, is one of the most impressive I have ever known.

She is an object lesson to every one of us. Why? She has no great oratory to offer the crowd. She doesn’t use a prepared speech whipped up by some brilliant publicist. She doesn’t dance, tell jokes or sing. (“Heavens,” laughs Dottie, “if I did, maybe they wouldn’t buy Bonds!”)

She hasn’t even evolved any trick, sure-fire selling slogans. She just talks — talks straight from the shoulder with a ringing sincerity that reaches down into the hearts of her audience and pulls out Bonds.

“I’m asking you to give your money — at a good profit — for the eyesight, the legs, the arms, the very lives of the men who are fighting for you. That’s a pretty easy exchange. Come on, now. Who’ll buy a Bond?”

And so it goes across the country. A man in Massachusetts says, “I will! I just lost my boy.” Dottie hurries him to the microphone and asks him to tell the crowd just that. A hundred other volunteers follow. 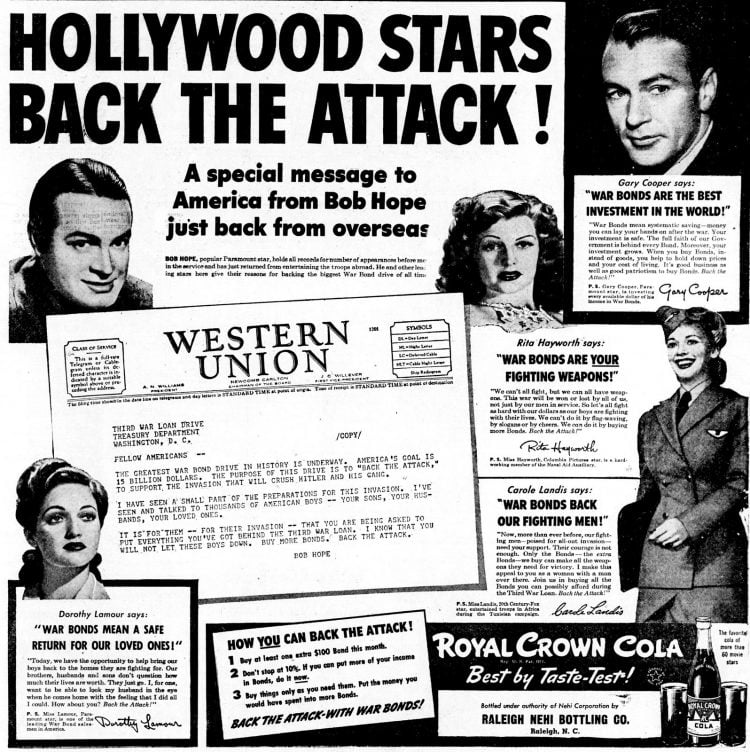 A little old lady in Indiana takes two dollars worth of stamps, a most precious offering. She’s living on relief because her two sons are in the service and she’s too old to work.

In Portsmouth, Maine, sixty solemn boys are sworn into the Navy on the stage where Dottie is appearing. When she calls for Bond buyers, three of them are the first to raise their hands. Afterward, they pass the hat among themselves to buy her a present. 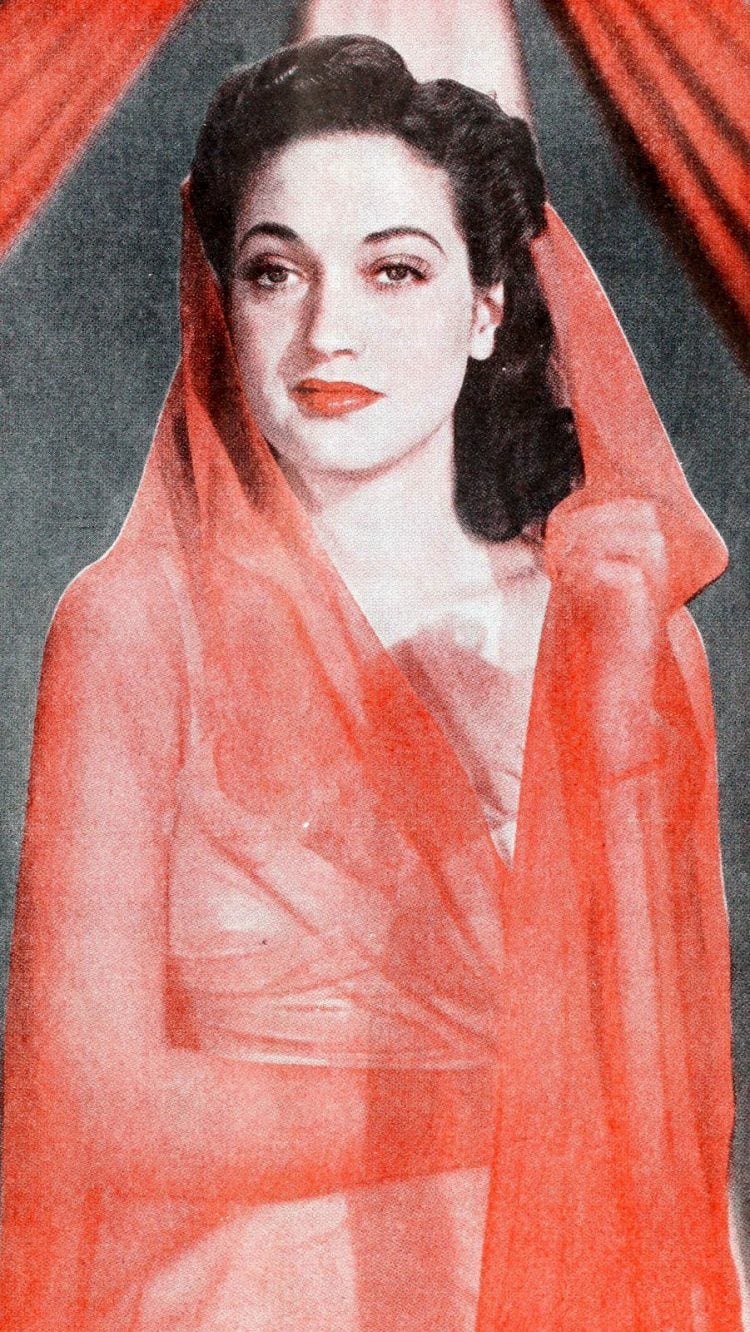 We’re all familiar with Dorothy Lamour, screen star, as a seller of songs and comedy, such as in “The Fleet’s In,” now at the Fox.

But now step up and meet Dorothy Lamour, seller of War Bonds and Stamps. 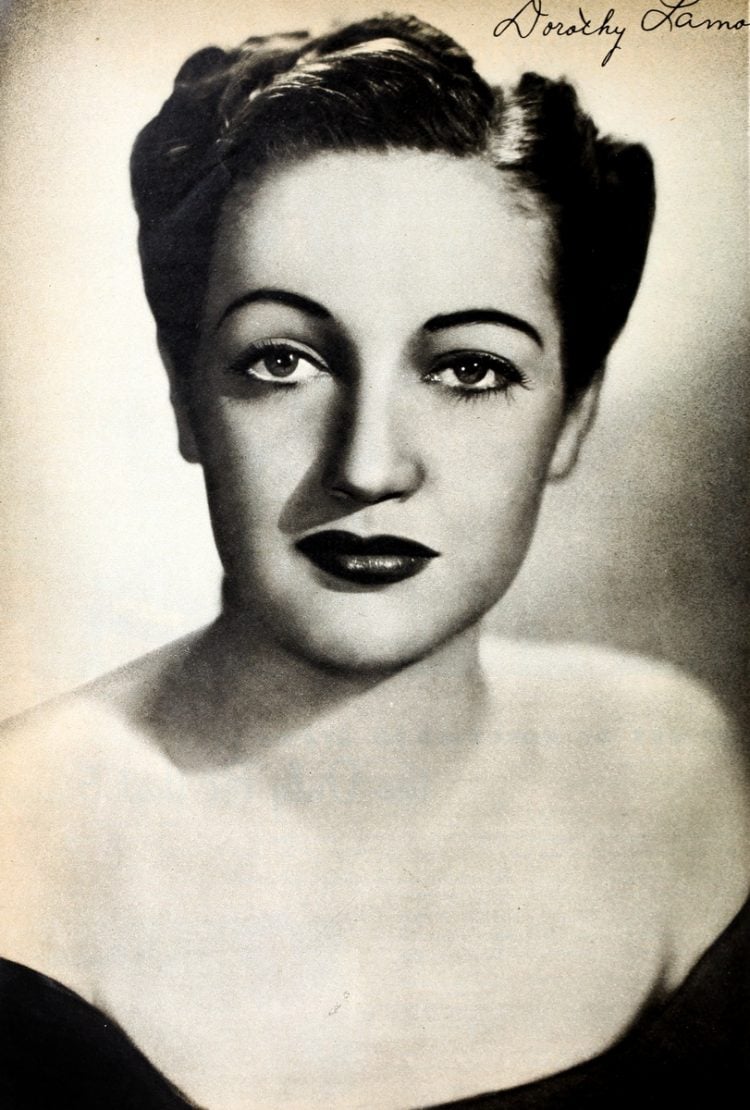 No less an authority than Howard Mills, California State Administrator for the U. S. Treasury Department, has called Dotty the Nation’s greatest salesman of War Bonds.

The official report shows that the pretty film star sold $25,000,000 worth of bonds in about one month during a country-wide tour! That was the month Dotty was supposed to be taking a vacation from the tough work she had been putting in on the Paramount sound stages.

She’d been appearing in one picture after another without let-up and needed a rest badly, but she more than cheerfully became a salesman for Uncle Sam.

MORE: Did married couples really sleep in separate beds back in the ’40s &  ’50s? 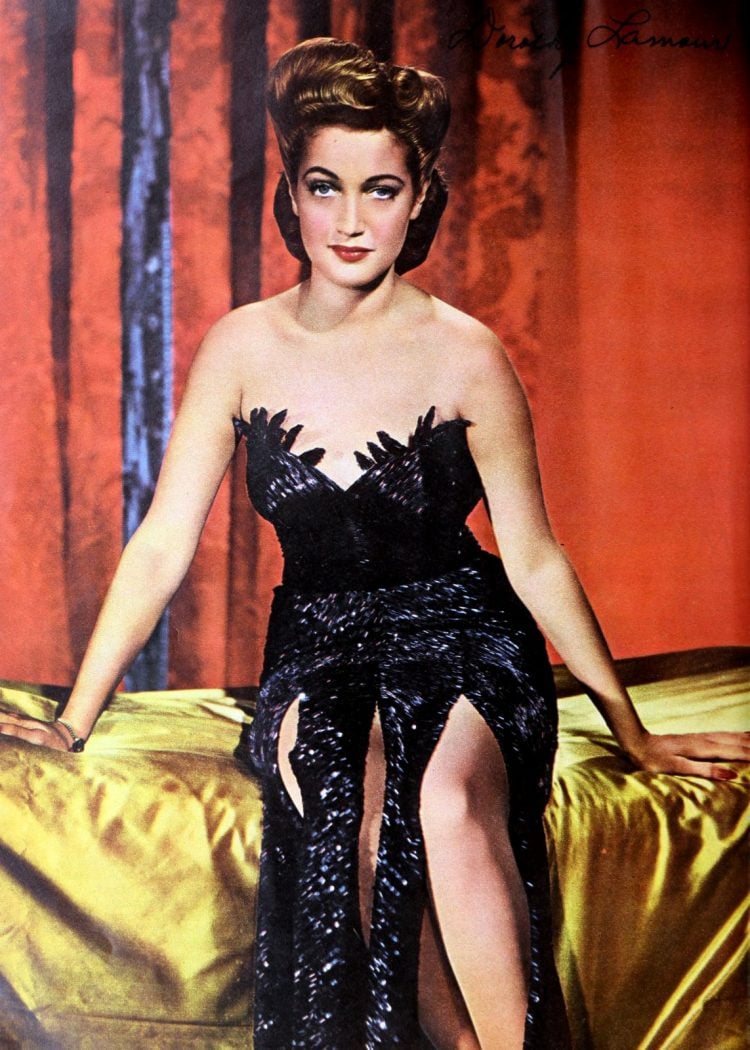 Dotty’s bond-selling effort is really history repeating itself, because that’s exactly what she did as a tot during World War I.

She was just about three years old, in her native New Orleans, when her mother helped her onto a decorated soap-box on the main street, so that she could sing songs and make speeches in a lisping voice urging people to buy Liberty Bonds and Thrift Stamps.

In Dorothy’s new picture, she sold bonds on the set between “takes.” 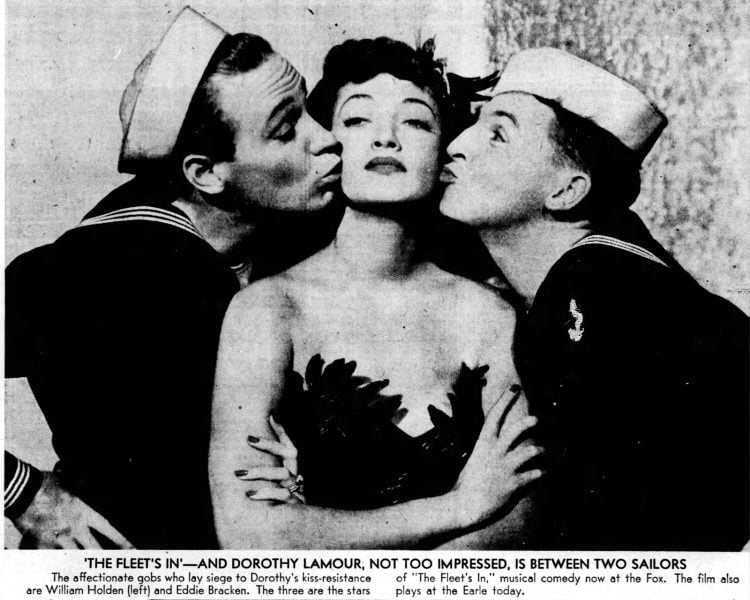 MORE: How they recruited for the WAC (Women’s Army Corps) during WWII

Dorothy Lamour… owes her original success to three things: the yard-and-a-half silk sarong that became her trade-mark and gained a certain immortality for itself (one is on permanent display at the Smithsonian Institution in Washington, another is buried in glass in the sidewalk at the corner of Hollywood and Vine Streets) and a couple of other girls named Dorothy.

It was Dorothy Dell, a childhood friend who became successively Miss New Orleans, Miss America and Miss Universe, then appearing in the Ziegfeld “Follies” in Chicago, who introduced her to Dorothy Gulman, a press agent for the Morrison Hotel.

ALSO SEE: About The Andrews Sisters, one of the top singing trios in history

Dorothy Gulman entered her in a singing contest, where she sang “Stars Fell on Alabama” and met (and later married) bandleader Herbie Kay.

The name Dorothy (“a gift from God”) was aptly picked by her mother before she was born: a sign painter in Dallas, Texas, accidentally streamlined “Lambour” into “Lamour,” and the name stuck. Originally she was Mary Leta Dorothy Slaton. Lambour was her stepfather’s name.

As almost everybody knows, Dorothy Lamour worked as an elevator operator at Marshall Field’s in Chicago (eight months at $17 a week, doubling as store model), but how she got there is a saga in itself.

Part of the prize for winning a Miss New Orleans contest was a small amount of cash. With it she bought two coach (“sit-up”) tickets to the Windy City, one for herself, one for her mother. Dorothy arrived there with $2 cash and two candy bars for sustenance, and her mother gave up her job and followed the next day.

Both set out to find work. Mrs. Lambour became a restaurant salad mixer, Dottie got the elevator job. (Years later, at a swank reception in Washington, she told Mrs. Marshall Field that the installation of automatic elevators drove her into pictures.) 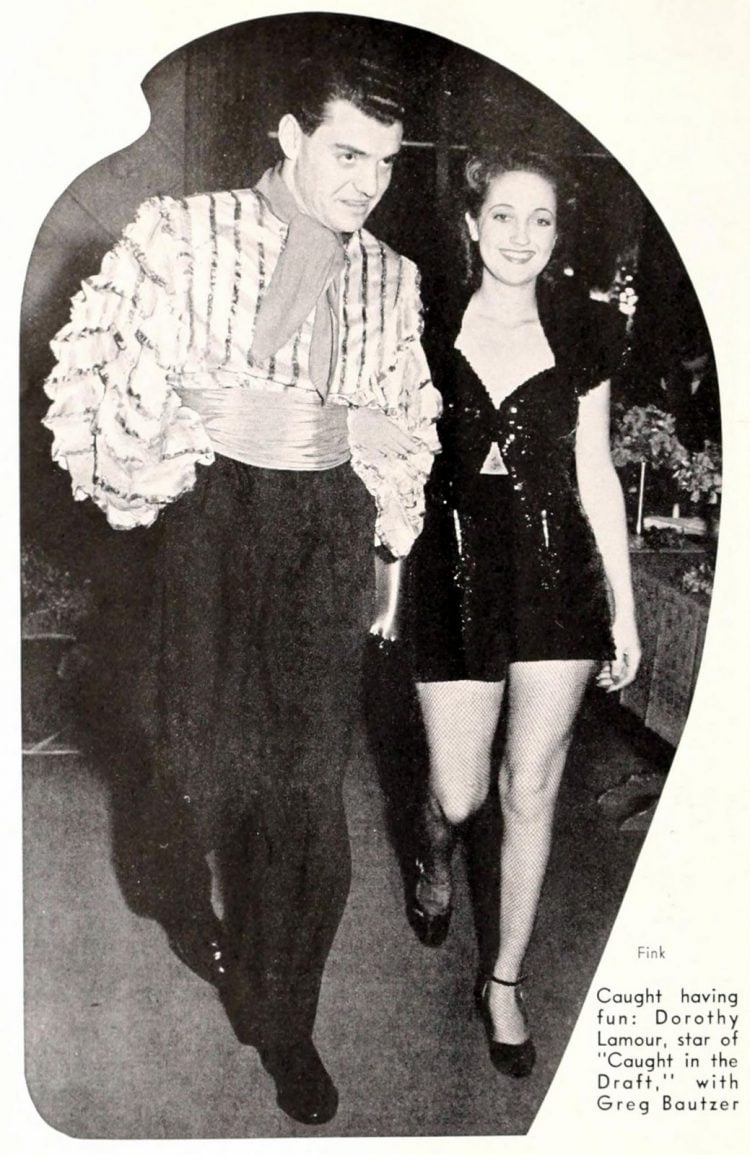 After three years touring with Herbie Kay’s band, she came to New York and, through one of Herbie’s former classmates, Rudy Vallee, she met Sherman Billingsley, who hired her as vocalist at the Stork Club for $150 a week.

Later, a stint at No. One Fifth Avenue Bar led to a sustaining spot on NBC-Radio as “The Singer of Dreams,” and this, in turn, led to Hollywood.

It took Dorothy about a year to crash the pictures, and, again, it was press agent Dorothy Gulman who placed her. Paramount was seeking a girl who looked sultry, had long hair, and could sing, and Dorothy filled the bill.

Her first movie was “The Jungle Princess,” and that typed her. Among the 52 movies she has made since have been six of those “Road to” pictures, with Bob Hope and Bing Crosby. (Dorothy remarks “My next movie will probably be ‘The Road to Versailles’!”) 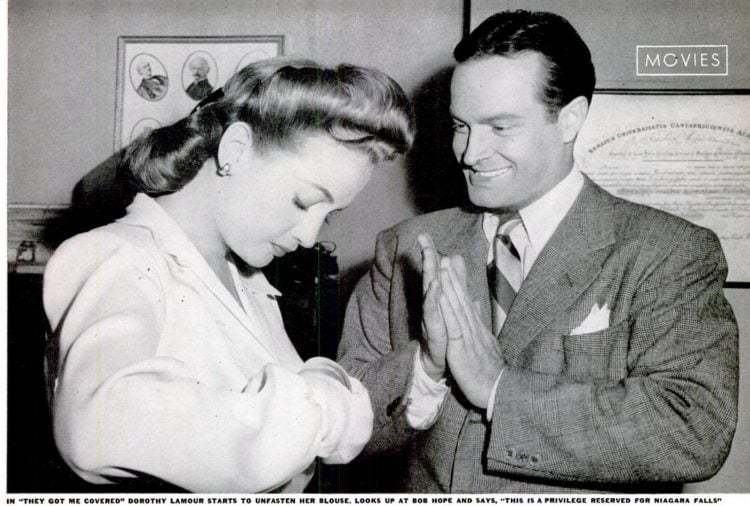 She is happy to be getting away from these jungle duds for a change, and appear in gowns and jewels appropriate for a swank supper club.

In 1939, Dorothy divorced Herbie Kay, and four years later married William Ross Howard 3d, of Baltimore, Md., then a major I in the Army Air Force stationed at Bakersfield, Calif.

As a war bond seller, Dorothy set something of a record — $6 million worth.

The Howards now have two sons, Ridgely, 11, and Tommy, 7, and divide their time between homes in Maryland, California and Colorado, where Ross has oil interests.

Dorothy, though New Orleans born, has no Southern accent because she learned English the hard way; up to the age of 11, she spoke only French. Her family background is a mixture of English, Irish, Spanish and French.

Want to feel your best — look your best? Here’s a hint from Dorothy Lamour! (Bexel Vitamin B Complex capsules) 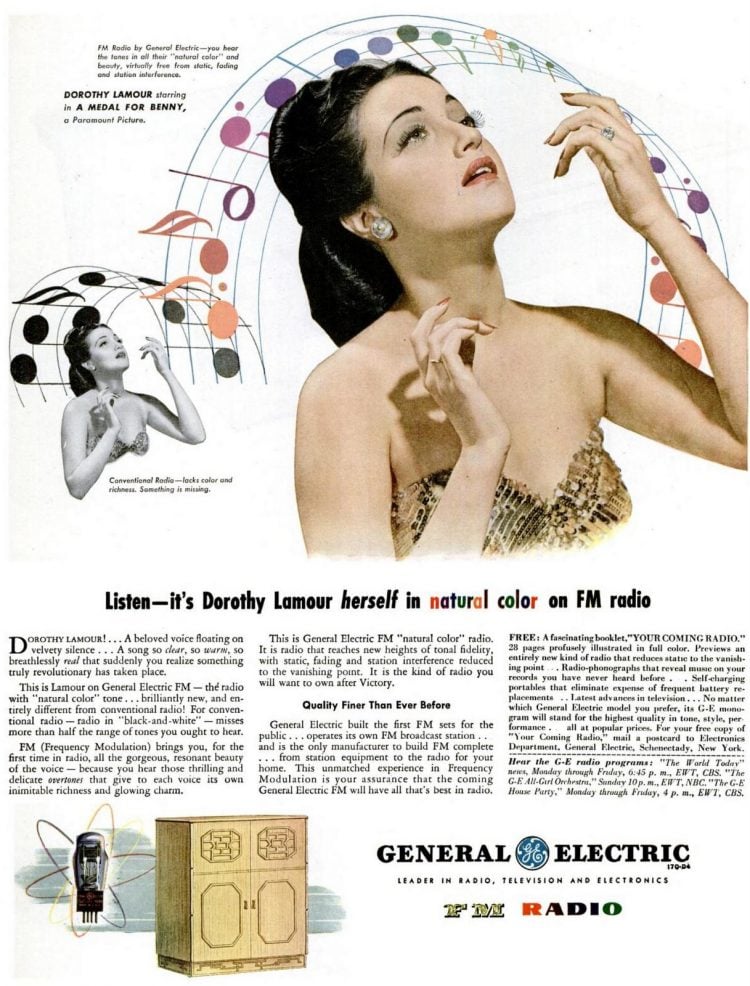 That’s why Cannon Rayons are such wartime wonders. They’re sheer as dream clouds — beautifully dull — marvelous for top-to-toe fit. And how they wear!

“But,” cautions Dorothy, “watch rayons when you wash ’em.” Even those divine Cannons—like all rayons—are weakened by water. Follow the rules-for-care faithfully and remember — 36 hours for drying! 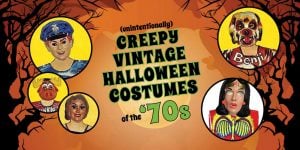