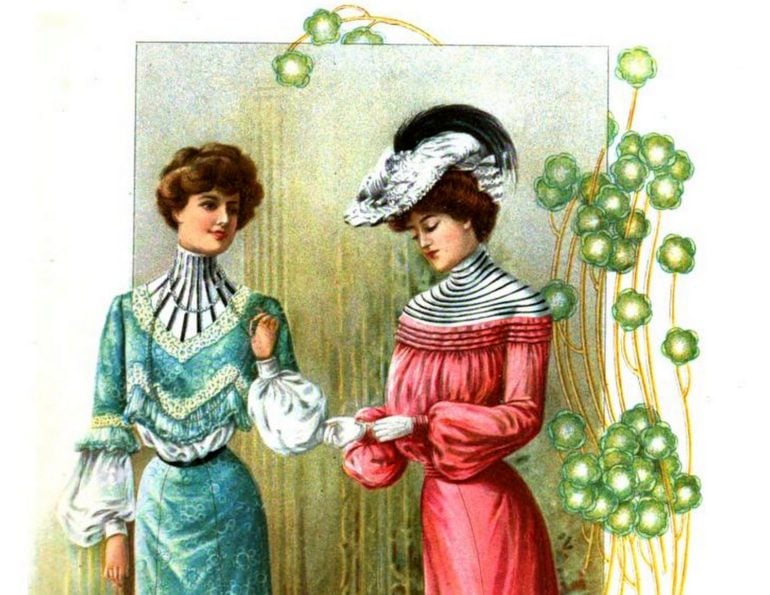 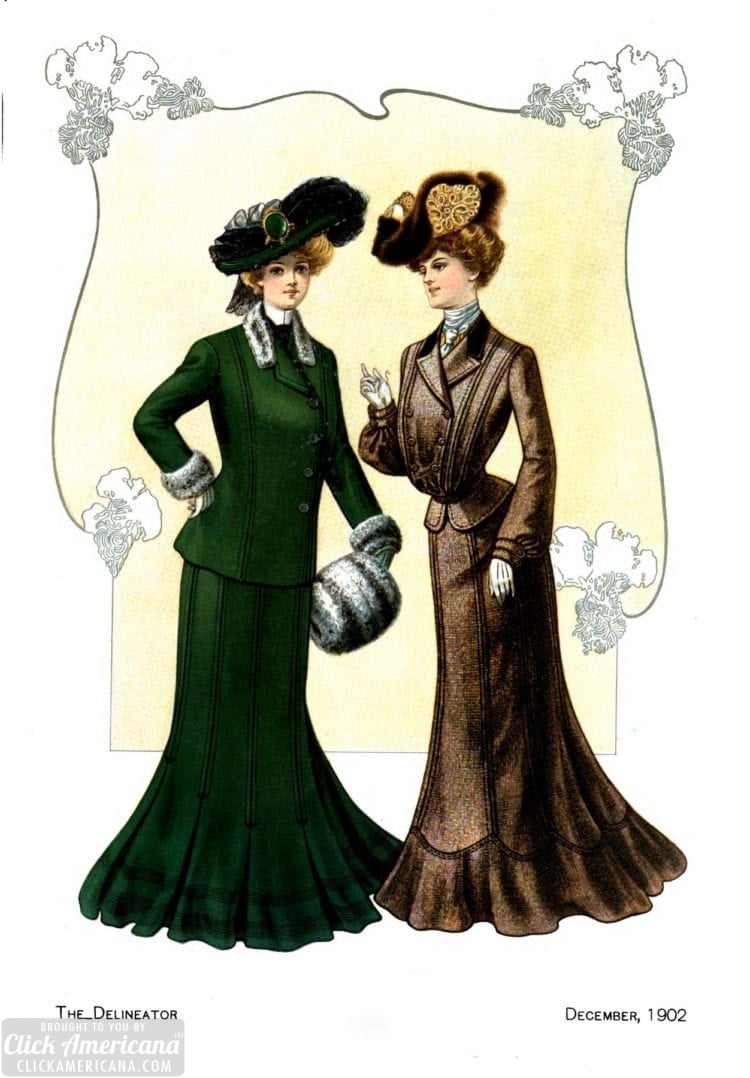 The evolution of fashion during the past century was never better illustrated than in the three photographs shown on this page. At a glance they convey more to the critical feminine eye than could reams on reams of minute description. But what is not so apparent are the conditions that are responsible for the popularity of the modern, tightly clinging gowns; for while fashion on its practical side still adheres to forms acceptable to the up-to-date woman, yet it is constant and persistent in its search for novelty and variety.

Where a hundred years ago, and even more pronouncedly fifty years ago, the wide, flaring, elaborately colored skirts were so dearly beloved of the feminine heart, today the smooth and simple forms, the clinging, elastic, graceful ideas are applied in skirt, blouse, bolero and other waist forms. Simplicity of outline is the rule. Heavy draperies are tabooed. Distinct is the aversion to anything in the line of coat-tails, panier, or jupon. 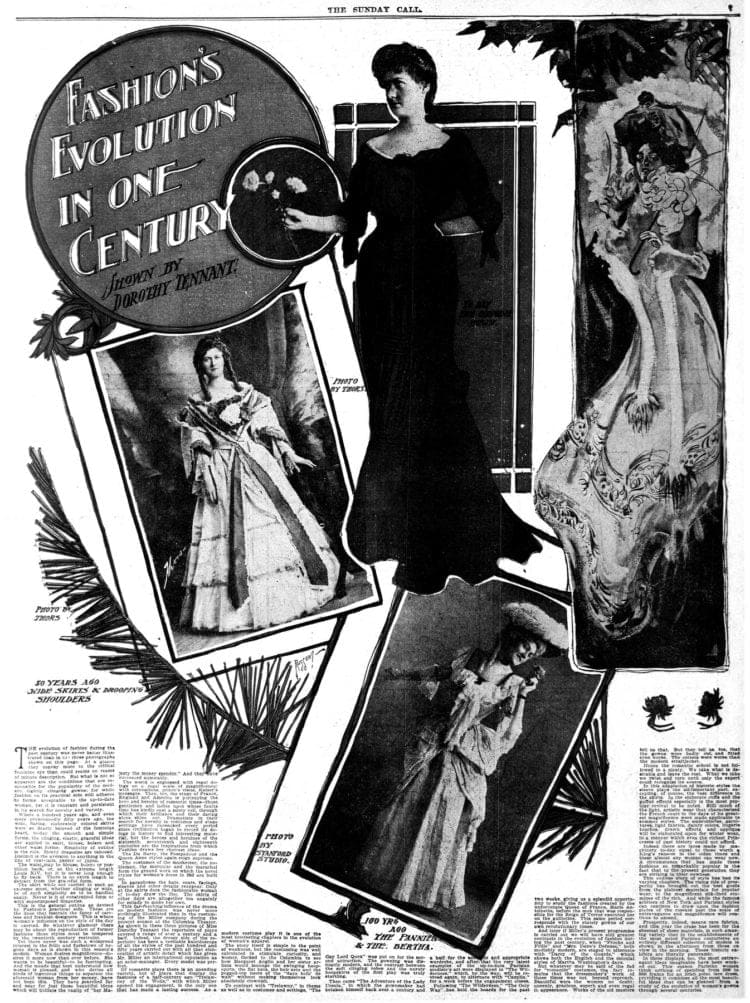 The waist may be blouse, bolero or postillion back, or, as the extreme length Louis XIV, but it is never long enough to fly back. There is no extra length to detract from the graceful form.

The skirt, while not carried to such an extreme, must, whether clinging or wide, be of such simplicity as to be handled easily. Never is it of constrained form or with superimposed draperies.

This is the general outline as devised by Fashion’s practical side. These are the lines that restrain the fancy of careless and freakish designers. This is where woman’s influence on the style of the day is exerted. So whatever glamour there may be about the reproduction of former fashions these styles must be tempered by the twentieth century restraint.

Yet there never was such a widespread interest in the frills and furbelows of bygone days as is shown in this season’s models. Woman desires magnificence — desires it more now than ever before. She wants to be beautiful — to be fascinating. And the meads that best understand how woman is pleased, and who devise all kinds of ingenious things to separate the aforesaid woman from her money, have not been idle. They have searched far and near for just those beautiful ideas which will titillate the vanity of “her Majesty the money spender.” And they have succeeded admirably.

The world is engrossed with regal doings on a regal scale of magnificence: with coronations, prince’s visits, Kaiser’s messages. Then, too, the stage of France, England and America is portraying the hero and heroine of romantic times — those gentlemen and ladies upon whose faults time has kindly cast a misty veil, through which their brilliance and their daring alone shine out.

Dramatists in their search for novelty in costumes and stage settings have ransacked every period since civilization began to record its doings in history to find interesting material, but the heroes and heroines of the sixteenth, seventeenth and eighteenth centuries are the inspirations from which Fashion draws her choicest ideas.

The Du Barry, the Pompadour and the Queen Anne styles again reign supreme. The costumes of the musketeer, the nobleman, the marquise and the Marechal form the groundwork on which the novel styles for woman’s dress in 1902 are built up.

In paraphrase, the hats, coats, facings, sleeves and other details reappear. Only at the skirts does the fashionable woman of today draw the line. The skirts of other days are altogether too ungainly for milady to make her own.

This far-reaching influence of the drama on modern fashions was never more strikingly illustrated than in the costuming of the Miller company during the present season at the Columbia Theater.

As shown in these three pictures of Miss Dorothy Tennant [below] the repertoire of plays covered a range of over a century and a half. Indeed, the dressy side of the repertoire has been a veritable kaleidoscope of all the styles of the past hundred and fifty years carried out with all that elaboration of artistic detail which has given Mr. Miller an international reputation as an actor-manager. Every model was perfect.

Of romantic plays, there is an unending variety, but of plays that display the fashions of a half-century ago, “Trelawny of the Wells,” with which Miller opened his engagement, is the only one that has made a lasting success. As a modern costume play it is one of the most interesting chapters in the evolution of woman’s apparel.

The story itself is simple to the point of weakness, but the costuming was well calculated to stimulate curiosity, and women flocked to the Columbia to see how Margaret Anglin and her sister artists would manage the swinging hoop-spirits, the flat hats, the hair nets and the pegged-top boots of the “days befo’ de wah” without making themselves look absolutely clownish.

To contrast with “Trelawny,” in theme as well as in costumes and settings, “The Gay Lord Quex” was put on for the second attraction. The gowning was distinctly modern, and the contrast between the soft clinging robes and the unruly hoopskirts of the first play was truly startling.

Then came “The Adventure of the Lady Ursula,” in which the gownmaker had betaken himself back over a century and a half for the accurate and appropriate wardrobe, and after that the very latest examples of the up-to-date Parisian modiste’s art were displayed in “The Wilderness,” which, by the way, will be revived again, to alternate with “Camille,” for a week before the engagement closes.

Following “The Wilderness,” “The Only Way” has held the boards for the past two weeks, giving us a splendid opportunity to study the fashions created by the unfortunate Queen of France, Marie Antoinette, before the Reign of Terror executed her on the guillotine. This same period corresponds with the stately gowns of our own revolutionary times.

And later if Miller’s present program is carried out we will have still greater contrasts in the evolution of fashion during the past century, when “Frocks and Frills” and “Mrs. Dane’s Defense,” both modishly modern, are staged to alternate with “Darcy of the Guards,” which shows both the English and the colonial styles of Martha Washington’s days.

But whatever may be said of the fad for “romantic” costumes, the fact remains that the dressmaker’s work of those times was not beyond reproach. Beautiful were the women, no doubt; queenly, gracious, superb and even regal in appearance. Works of the old masters tell us that. But they tell us, too, that the gowns were badly cut, and fitted even worse. The corsets were worse than the modern straitjacket.

Hence the romantic school is not followed to a nicety. We take what is desirable and leave the rest. What we take we twist and turn until only the expert could recognize its source.

In this adaptation of historic styles, the sleeve plays the all-important part, excepting, of course, the vast difference in the skirts. In the elaborate cuffs and the puffed effects especially is the most popular revival to be noted.

Still much of the light, artistic wear that characterized the French court in the days of its greatest magnificence were made applicable to summer styles. The embroideries, garnitures, light fabrics, dainty colors, lingerie touches, drawn effects and applique will be elaborated upon for winter wear, in a manner which even the richest Princesses of past history could not afford.

Indeed there are laces made by machinery today equal to those worth a King’s ransom in the olden times and these almost any woman can wear now. A circumstance that has made these fashions so remarkably popular is the fact that to the present generation they are striking in their newness.

This endless story of style has had its varying chapters. The rising tide of prosperity has brought out the best goods from the plainest materials for popular wear, to the magnificent silk-lined etamines of the rich. And while the famous arbiters of New York and Parisian styles can continue to ascend.

Prosperity, indeed, means rare fabrics, and this year the craze has been for the sheerest of sheer materials, in such amazing variety that in the establishments of the most noted Parisian couturiers an entirely different collection of models is shown in the afternoon from those on view in the morning. These historic exhibits are literally panoramic.

In these displays, too, the most extravagant ideas imaginable have been worked out. This season, Parisian women think nothing of spending from 3000 to 8000 francs for an Irish point lace dress, providing it combines all the most beautiful ideas that can be gleaned from a study of the evolution of women’s gowns through several centuries. 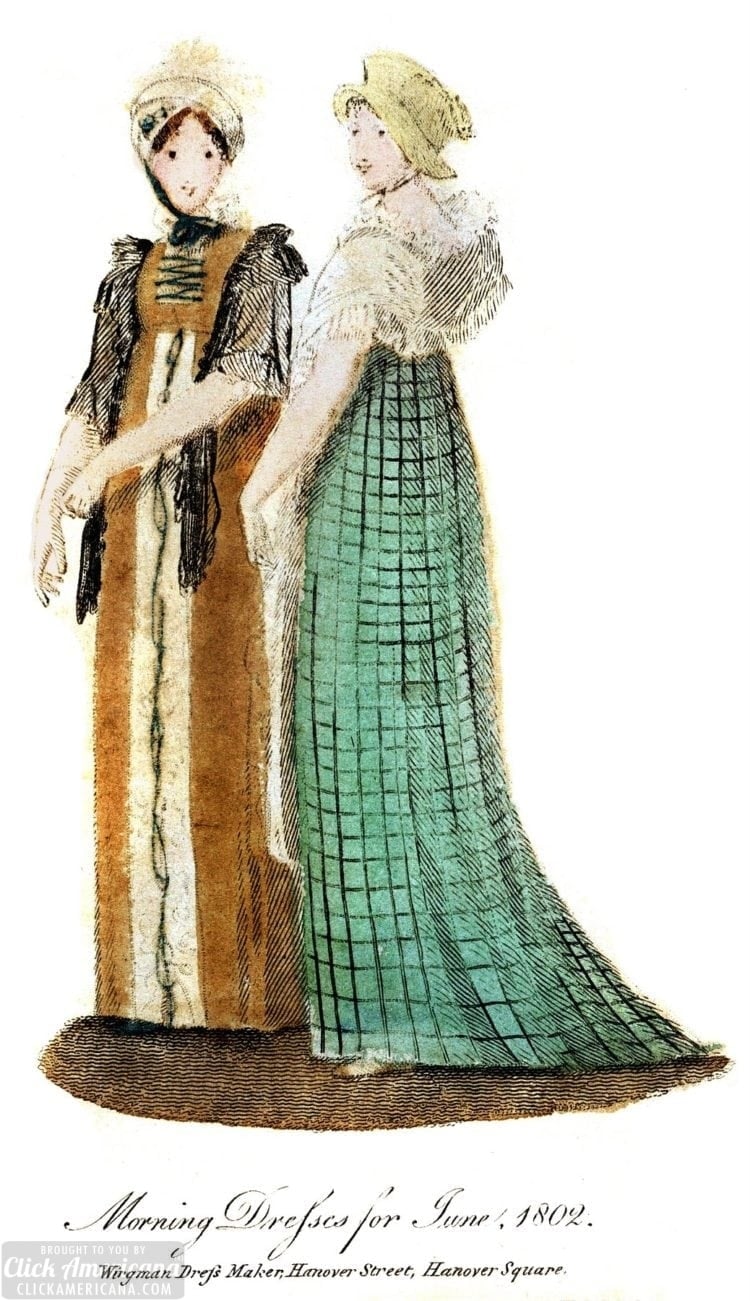 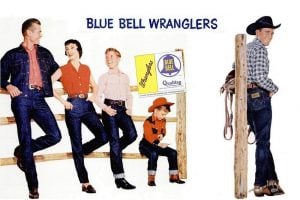 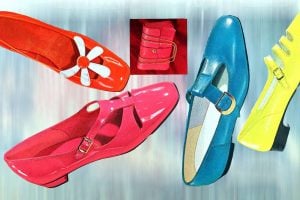 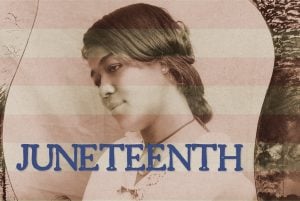