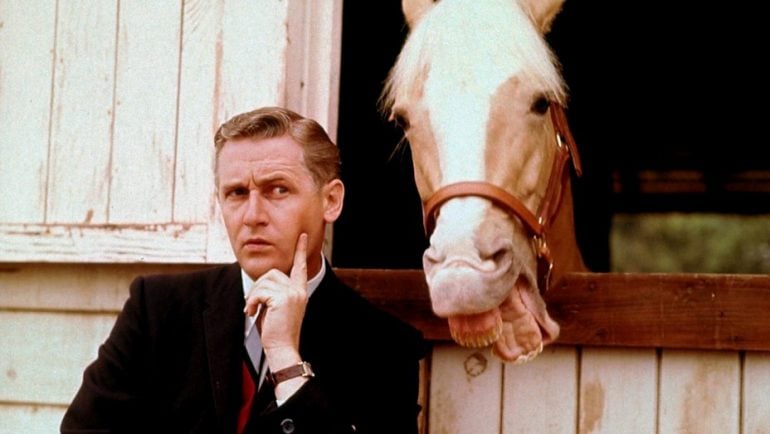 IF THERE’S ANY one thing responsible for the success of the Mister Ed series, it can be summed up in a single word: cooperation. These are the words of Alan Young, star of the series that features the talking horse, Mister Ed.

“It’s as simple as that,” explained Alan. “We’re blessed by having a cast, crew and production staff that is the epitome of togetherness — work together, think together and enjoy Mister Ed together.”

Now in its first season on CBS-TV (Sundays, 6:30-7:00) Mister Ed is actually in its second year. The show premiered in 1960 as a syndicated television program and is the first program ever to make the reverse switch — from syndication to a network.

AND ALREADY it has set new records for the Sunday time slot, with more viewers than any program seen before in that time slot in television’s history.

But this isn’t a story about reverses, ratings or records. It’s the story of Mister Ed, one of the most intelligent, most docile, most understanding horses on television or off. And it’s the story of some of the people who feel it’s a privilege to play supporting roles with Ed. 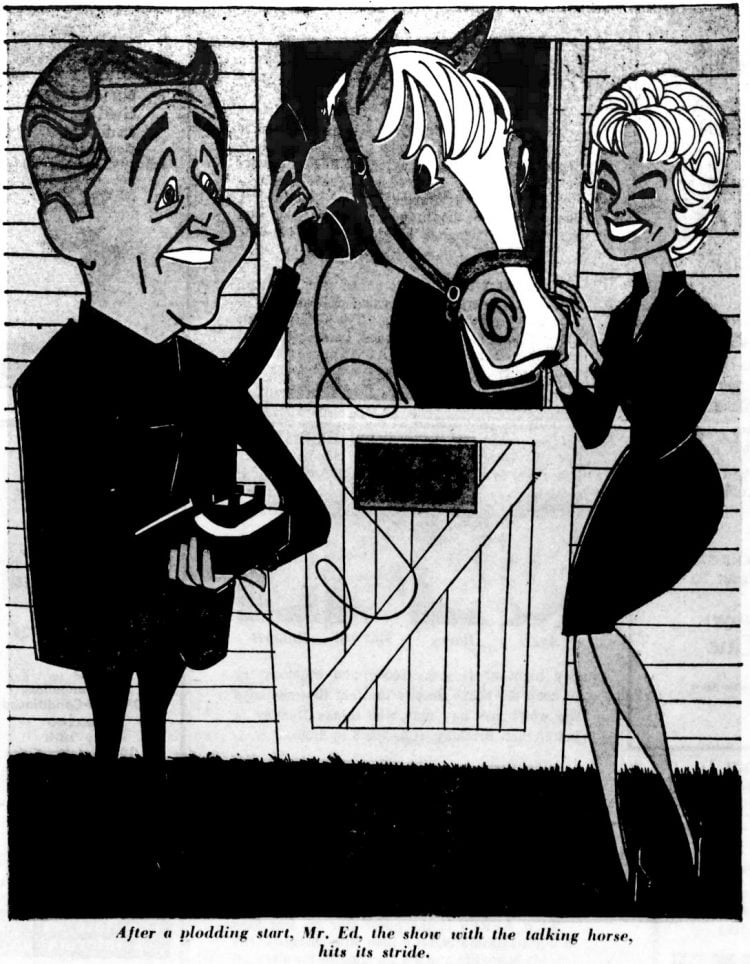 The Mister Ed series was actually seven years in becoming a reality. Back in 1953 Arthur Lubin, the producer-director of Mister Ed, came across the short stories which appeared in national magazines, written by Walter Brooks and featuring a talking horse as the principal character.

Lubic saw great possibilities in featuring a talking horse in a television series, and tried to interest Alan Young in his idea.

“I GUESS I didn’t have Arthur’s foresight then,” says Young today. “In 1953, I couldn’t picture myself being buddy-buddy with any kind of a horse, silent or gabby.”

After spending nearly three years in his native England, where he wrote, produced and starred in British television, Young returned to the United States and again Lubin suggested the Mister Ed series to him.

This time, he was receptive to the idea, and after seeing the pilot, Young jumped at the opportunity to star in the series.

And it went into syndication on more than a hundred television stations across the country. “It wasn’t an immediate hit, either,” Lubin recalls. “I guess the viewers needed a little time to get accustomed to seeing — and hearing — a horse talk.” 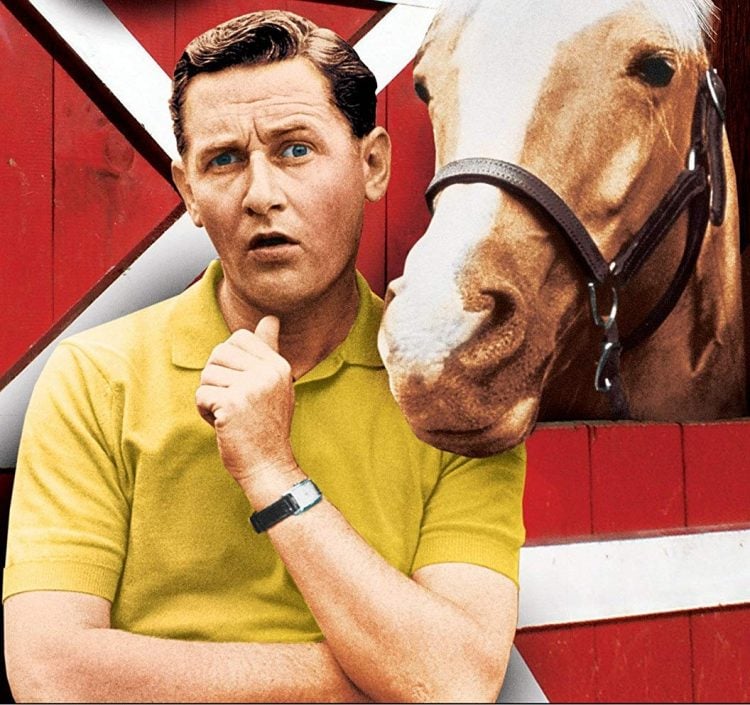 ALAN YOUNG, as star of the show, is boundless in his respect and admiration for his fellow players. “Who could ask for a sweeter, more attractive television wife than Connie Hines?” he asked.

Speaking of Mister Ed himself, he’s a Palomino. Mister Ed’s real name is Bamboo Harvester, but for show business, he consented to have it changed to Ed.

He’s a medium-sized horse, standing 5 feet, one inch tall. Ed lives in a comfortable stable at the residence of his trainer, Les Hilton, in the San Fernando Valley.

HILTON IS no newcomer to the trained-animal business, having handled Francis the Mule, Fury, Flicka and others. Of all of the animals in his career, Les admits Mister Ed is the most satisfactory, competent and intelligent animal he’s worked with.

Hilton explained that Mister Ed is a trained horse, not a trick horse. When the script calls for Ed to do something unusual Les walks him through the particular assignment several times. Then he puts Ed on his own, and nine times out of 10, he’ll do what’s required of him on the first take. 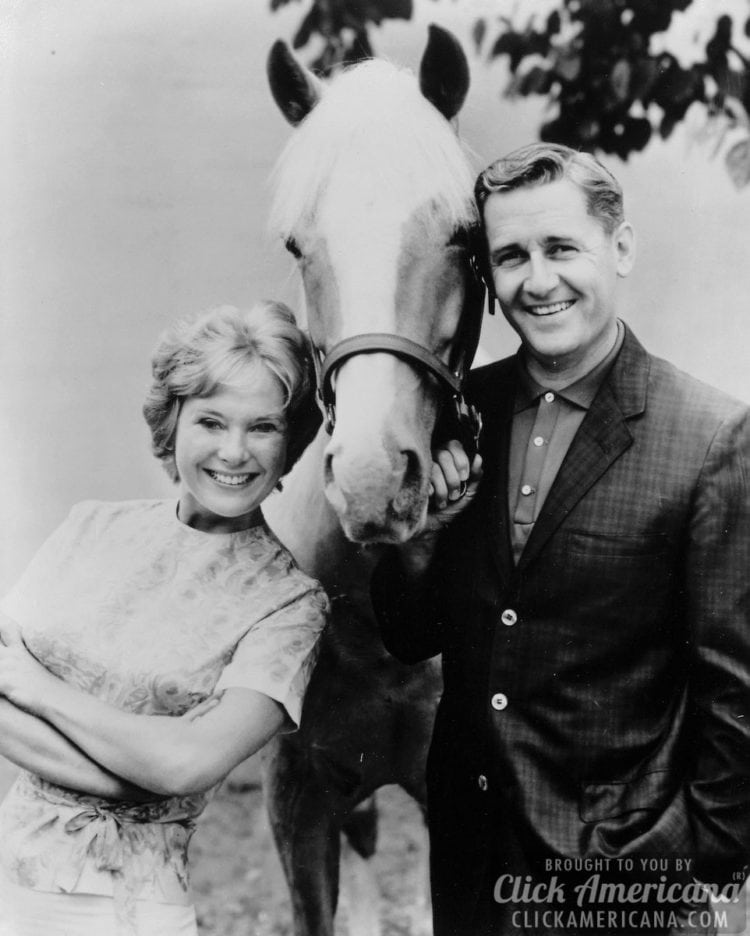 So far, Lou Derman, the imaginative head writer of the Mister Ed series, hasn’t come up with anything for Ed to do that he’s unable to do — even to making friends with an elephant.

One thing that both puzzles and amuses everyone on the set is a horse’s ability to sleep standing up with his eyes wide open.

MISTER ED’S conversation in the series is limited to verbal exchanges with Wilbur Post (played by Alan Young) who is Ed’s owner. And while this might seem to limit Ed, there has been a lot of chatter that gives a good indication of his sense of humor.

Many filmed television shows have a tight shooting schedule, completing a program in three or four days per episode, which often makes for considerable tension on the sets on the part of the actors and the crews. The Mister Ed shows are shot in three days, but the tensions that exist elsewhere are absent on this set. One crew member explained it complete and sincerely.

“It’s a fun show to work,” he said, “and it’s a happy set. I get the feeling we’re all a part of one big family with Mister Ed as the ‘ead of the house.”

It all makes good horse sense. 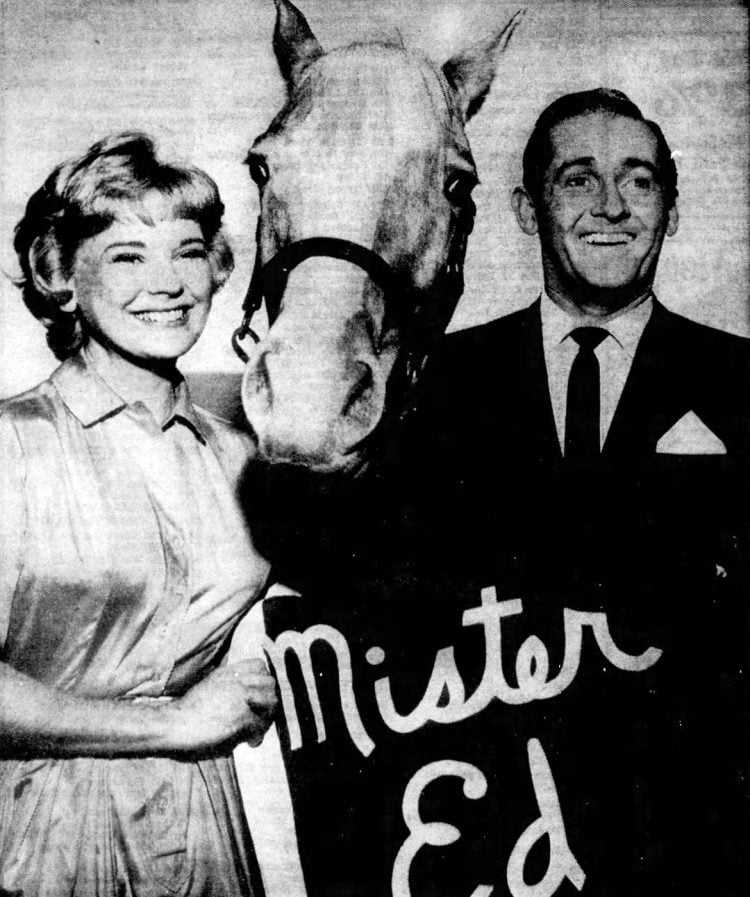 Excerpted from an article published in The Marion Star (Marion, Ohio) – January 04, 1961

The idea for “Mister Ed” was conceived a couple of years ago by director Arthur Lubin, who did the six “Francis the Mule” movies, and producer Al Simon.

In the television show, Alan Young plays an architect (Wilbur) who, with his wife (Connie Hines), moves into the country. The previous owner of the house and barn has left Ed, the horse, behind.

The horse talks only to Alan, and of course, this leaves him trying to explain all sorts of odd things to his wife and acquaintances. “Ed is really a character,” says Alan. “He answers the phone when I’m not around, and gets into arguments with my clients.” 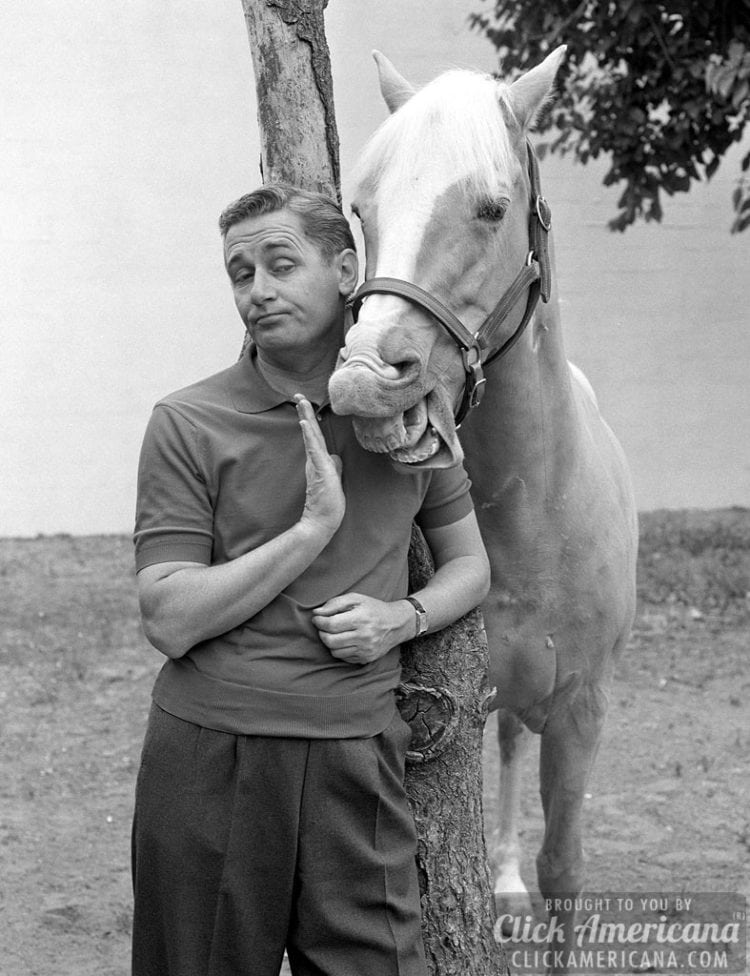 Director Lubin prefers to keep Ed’s talking trick a classified bit of information. An off-camera actor’s voice is used for simultaneous dubbing, while Ed supposedly is mouthing the words. Some kind of contraption is concealed in the horse’s mouth which causes him to move his lips.

MORE: About The Dick Van Dyke Show, the comedy TV series from the ’60s – plus see the opening credits

With an uninhibited animal around, all sorts of things naturally happen on the “Mister Ed” set at General Services Studios. If Ed gets temperamental, it means that the human actors have to work faster to keep the shooting schedule from falling into overtime.

“I’ve never been around horses before, especially talking horses, and it’s quite an experience,” says Alan.

“Well, it’s like working with Charlie McCarthy. I catch myself talking to the horse when we’re off camera. The other morning, I passed Ed on the set and said. ‘Hello, Ed.’ When he didn’t say anything, I was a little shaken and thought perhaps he was mad at me.”

“Sure. Don’t forget, there are a lot of comedians out of work now. Of course, I suppose with this experience I could get guest shots with Fury and Lassie,” says Alan. 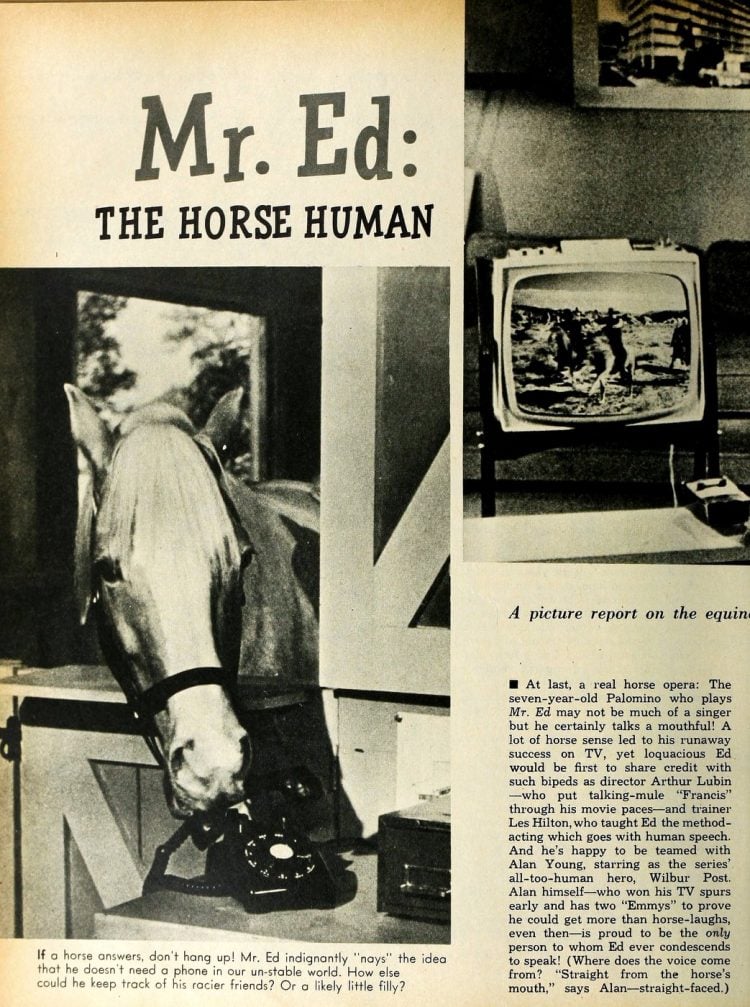 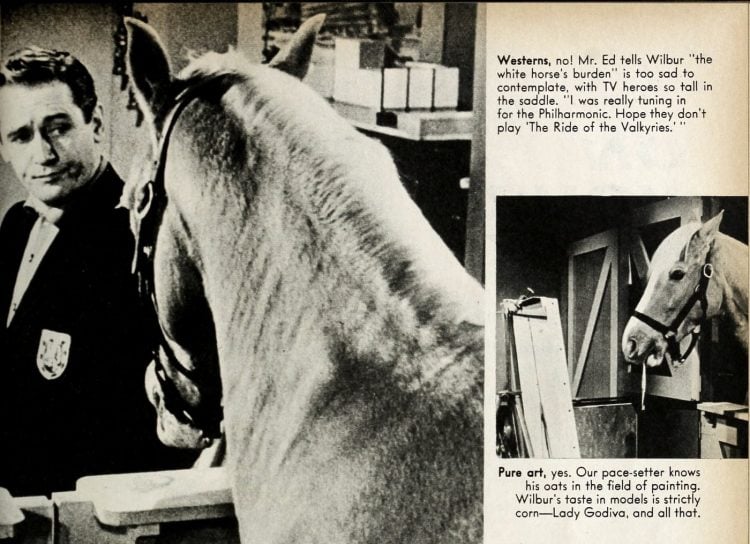 Go right to the source and ask the horse.
He’ll give you the answer that you’ll endorse.
He’s always on a steady course.
Talk to Mister Ed.

[Below only included in the closing credits]

People yakkity-yak a streak and waste your time of day,
But Mister Ed will never speak unless he has something to say.

A horse is a horse, of course, of course.
And this one’ll talk ’til his voice is hoarse.
You never heard of a talking horse?

Well listen to this: I am Mister Ed. 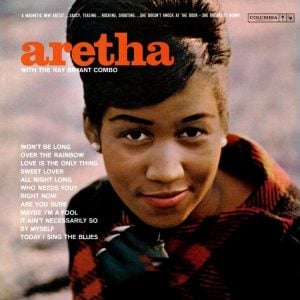 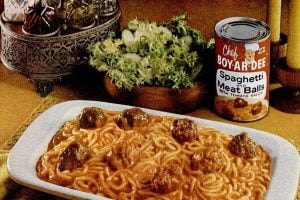