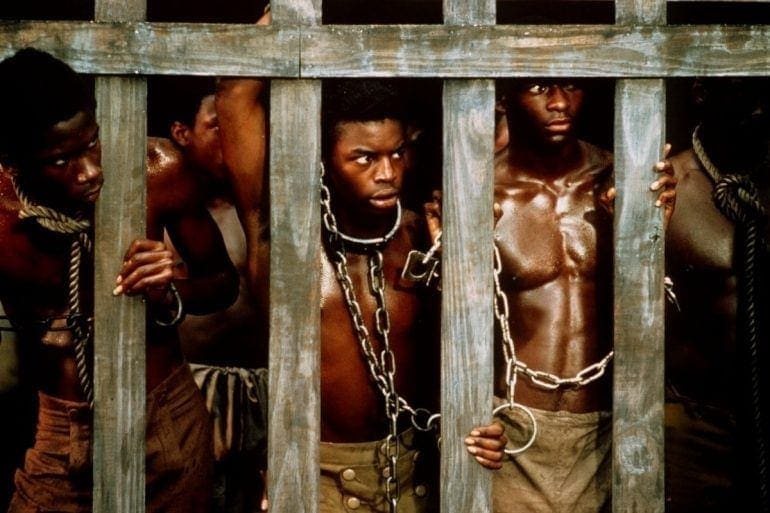 ABC is asking for trouble by showing “Roots” on television.

From Jan. 23 through Jan. 30, ABC will present a 12-hour adaptation of Alex Haley’s best-selling book, Roots, which traces the history of his family from Africa to the United States.

The trouble for ABC will arise from a great many of us asking why we cannot see more television like this, not just on ABC, but on CBS and NBC as well.

Ordinarily, I flee in panic from the kind of statement I am about to make, namely. that television will never be the same after this nation has seen “Roots.” The problem with television is that it usually remains the same, which is the worst indictment that can be made against it. 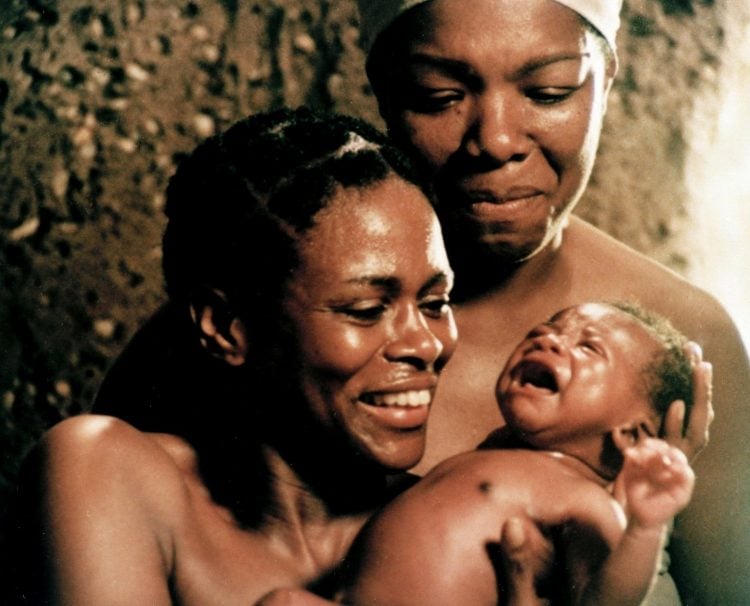 But as I sat the other night with others at a special screening where ABC presented the first two-hour episode, plus scenes from the remaining 10 hours, it occurred to me that something quite revolutionary was about to happen to television with great implications for its future. 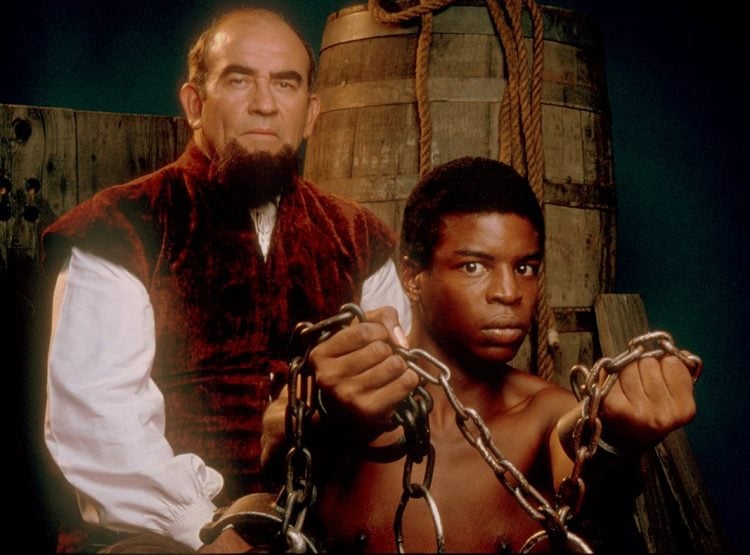 Roots miniseries goes beyond what has been seen

But more revolutionary than the manner in which it is being presented to us is that David Wolper’s production extends far beyond the boundaries of what has previously been deemed permissible on our television screens.

I speak here not of the sight of bare women’s breasts, nor of the sight of the ceremonial circumcision knife as the young Haley ancestor Kunta Kinte, and other young men are about to end their tribal initiation into manhood, or the scene where Thomas Advies, a conscience-stricken slave-ship captain is torn by his Old Testament Christianity and his lust for a young slave girl.

No, there is something more. It is the manner in which this production, on which Haley acted as consultant, has decided to confront a central experience of this nation’s development slavery, and what it has done to blacks and whites alike. 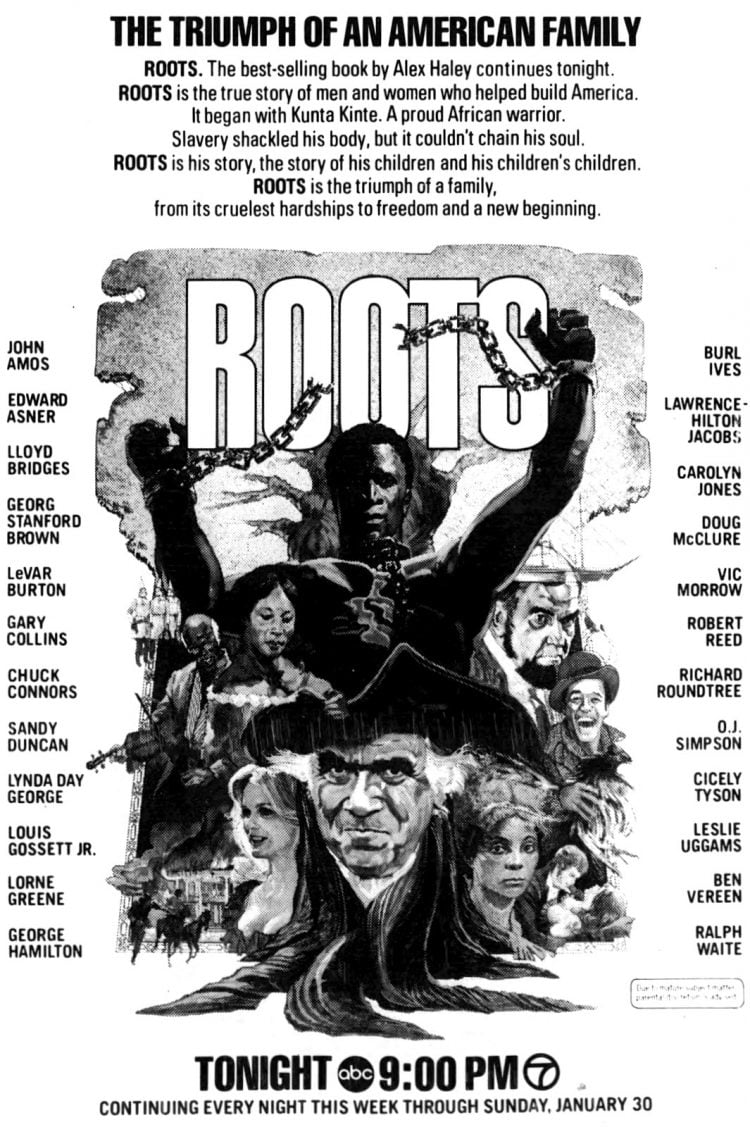 Roots miniseries: A sense of awe

The scenes on the ship, with the slaves being chained together, stacked alongside one another, lying in their vomit and excrement, being taken on deck to be doused with salt water that burns into the wounds that have been inflicted by the lashes of a whip, are something we have never seen before. We have read about slavery, but we have never seen it — never in such painstaking detail, and never being experienced with such excruciating pain.

Television, when it sets out to portray reality, usually distorts it or just nibbles at it.

I am at loss for the proper word to use to describe what television has done with Haley’s work. “Enhance” will not do, nor is “heightened” sufficient. There is no word that is adequate. All you know is that what you have seen leaves you with a terrible and quite transcending anguish.

It is very odd. Television, which washes over us each day with the fantasy world of game shows, soap operas, talk shows, the nightly news, sitcoms, and cops and robbers rarely unites us in a sense of silent awe.

Only rarely has that happened in the short history of television — after the assassinations of the ‘60s and on that Saturday evening in the summer of 1974 when we sat in silent awe. individually and collectively. as the clerk of the House Judiciary Committee polled its members on the first article of impeachment against Richard M. Nixon.

“Roots” will be another of those rare occasions when television will leave us with that sense of silent awe.

WATCH ROOTS NOW: Stream the original TV series or get it on disc 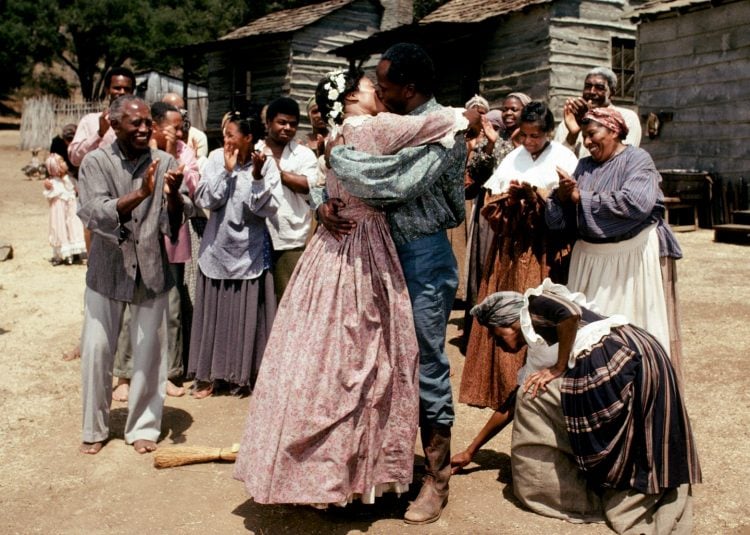 The lives of people that history forgot — the men and women who lived through the era of slavery in the United States — are the subject of “Roots,” the panoramic best-seller by Alex Haley, which he spent 12 years researching.

The saga has been adapted for an “ABC Novel for Television” on the ABC Television Network. Roots will air for 12 hours over eight consecutive nights, beginning Sunday and concluding Sunday, Jan. 30 [1977].

A huge cast of major American actors portrays the figures. Many of them are identified in the night-by-night rundown of Roots which follows:

Kunta grows up free and happy, guided to manhood by Brima Cesay (Harry Rhodes), the Kintango (Moses Gunn), the Wrestler (Ji-Tu Cumbaka), and an African tribesman (OJ Simpson) who teaches him a lesson in manners. Then, when the boy is 17, he is taken prisoner by slave catchers, and shipped to America on a vessel commanded by the conscience-stricken Capt. Davies (Edward Asner) and the amoral Third Mate Slater (Ralph Waite).

Kunta is involved in a disastrous attempt at rebellion on board the slave ship before his arrival in Annapolis, where he is sold to his first owner (Lorne Greene) and meets his first, and only, friend, an American-born slave called Fiddler (Louis Gossett, Jr. ). Despite the close watch kept by a cruel overseer (Vic Morrow), Kunta makes the first of many attempts to escape.

The year is 1776, and the adult Kunta (now played by John Amos) has lost none of his rebellious will. His final escape attempt costs him his right foot, and the crippled slave is nursed back to health by a slave woman called Bell (Madge Sinclair) on the plantation of his second owner (Robert Reed).

It is 1778, and Kunta, as the plantation master’s personal wagon driver, is learning the secrets that slaves and servants always know — such as the affair between the owner and his brother’s wife (Lynda Day Goerge). Soon, with the encouragement of the wise Fiddler, Kunta and Bell are married, and Kunta passes up his last chance at escape because of the birth of his daughter, Kizzy.

In 1806, Kizzy (Leslie Uggams) helps a young slave (Lawrence-Hilton Jacobs) to run away. As punishment, she must be sold, and she is rejected even by her one white friend (Sandy Duncan). The horror of separation from her family is magnified a thousandfold when she is immediately raped by her new owner (Chuck Connors).

In 1824, Kizzy is now the mother of a youth who will be called Chicken George (Ben Vereen), sired by her owner. The master of the grubby “plantation” raises fighting chickens, and he is visited by another “sporting man,” Mr. Bennett (George Hamilton), who wants to buy Chicken George, who is a superb trainer.

At the same time, Bennett’s slave (Richard Rountree) wants to marry Kizzy, but George’s owner won’t sell George to Bennett, and Kizzy will not marry away from her son. Soon, as word of spreading slave rebellions led by Nat Turner reaches the plantation, the owner’s wife (Carolyn Jones) becomes terrified of all black people, and the slaves are guarded by the master’s gun. Chicken George, who has taken a wife (Olivia Cole), is sent off to England to pay his owner’s debt, with the promise that he will return a free man.

ALSO SEE: Harriet Tubman: The notable career of a slave (1913) 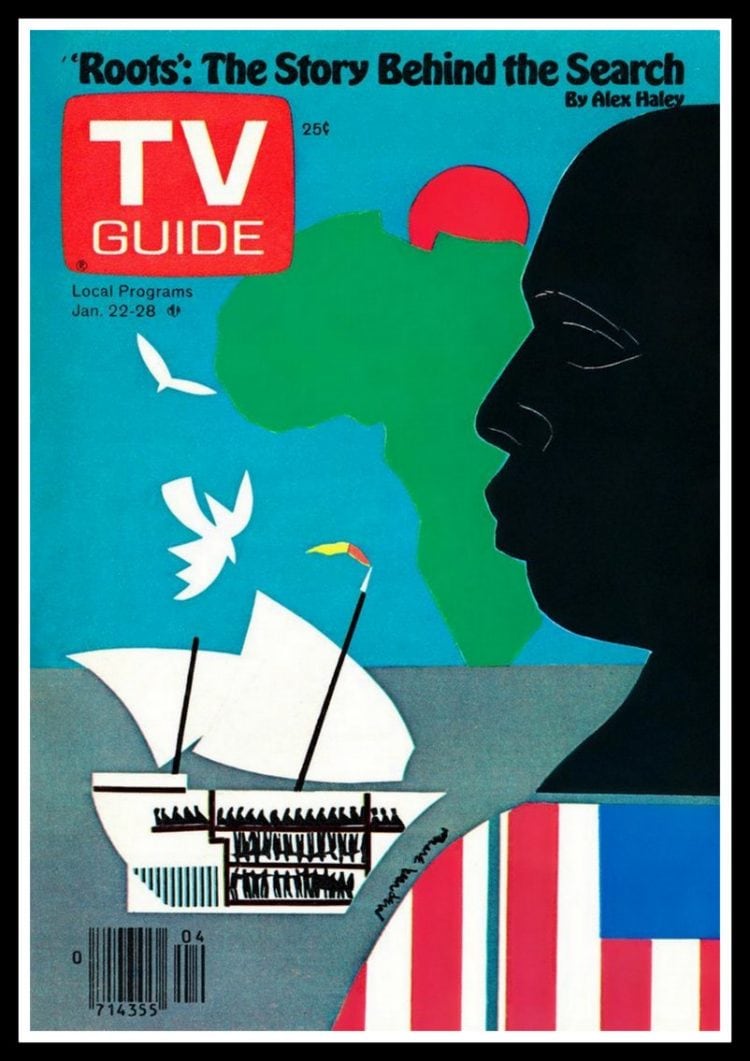 In 1859, when George returns home, he finds his son Tom (Georg Stanford Brown), now a blacksmith and married himself (to Lynne Moody), serving as head of the family. The possibility of the abolition of slavery is in the air, and George’s freedom is deeply resented by many white men, especially two viciously racist brothers named Evan and Jemmy Brent (Lloyd Bridges and Doug McClure).

When the Civil War begins, Tom is recruited — and cruelly mistreated as a smithy for the Army, where he meets a young boy called Ol’ George Johnson (Brad Davis) who is to become an important part of their lives.

The Civil War is over, but freedom has a bitter side effect, as most people seem interested only in using and abusing the emancipated blacks in the same old way. Chicken George and his family are harassed by hooded nightriders and exploited by men such as Evan Brent and a former Confederate Senator (Burl Ives) until finally, in a move that will truly affect generations to come, they move to start anew in the tiny town of Henning, Tennessee.

WATCH ROOTS NOW: Stream the original TV series or get it on disc 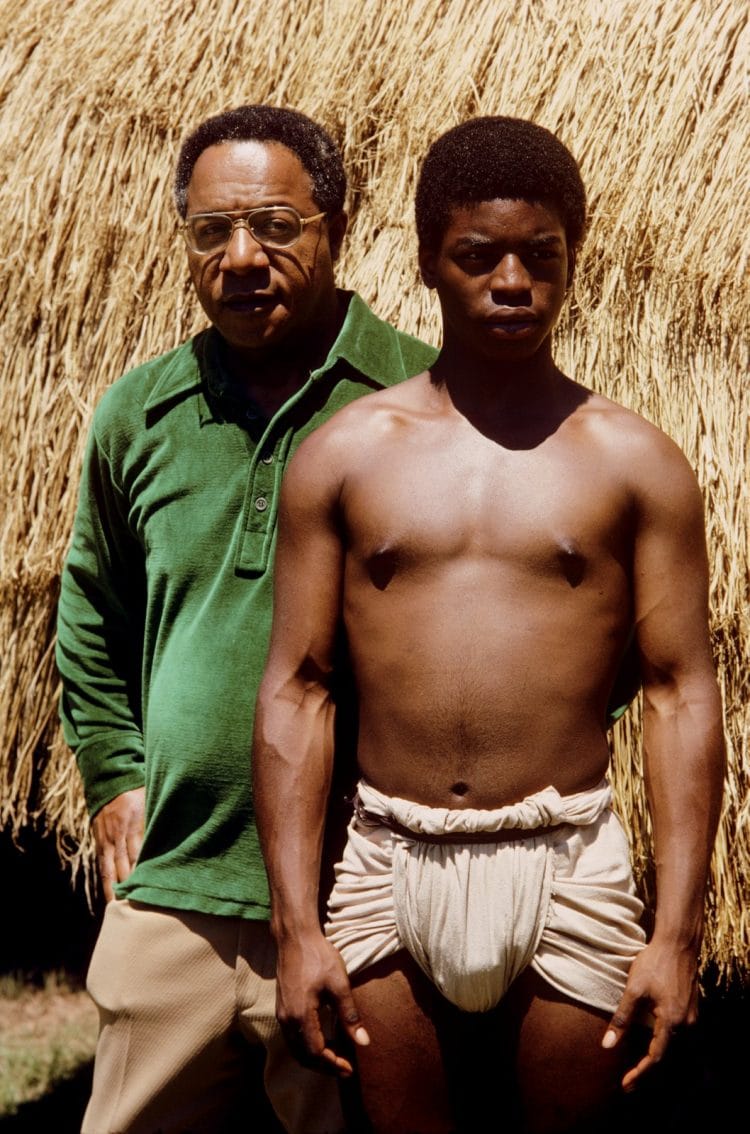 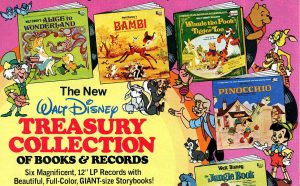 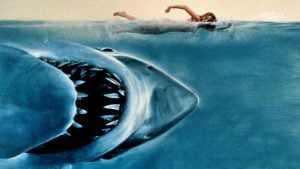