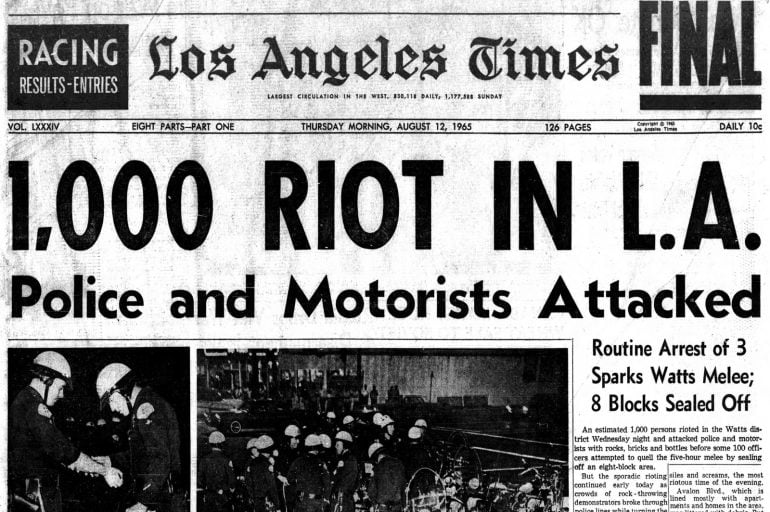 Facebook
Pinterest
Twitter
LinkedIn
Reddit
Email
Fifty-plus years ago, when white California Highway Patrol motorcycle officer Lee Minikus pulled over 21-year-old African-American Marquette Frye on the evening of August 11, 1965 for reckless driving, little did both men know that moment would become the flashpoint for rioting and rebellion that had been simmering under the surface of Los Angeles that summer.

After Frye failed a field sobriety test, he was placed under arrest. Eventually, brought by Frye’s brother who had been a passenger in the car, his mother arrived on scene, and a scuffle ensued. After police attempted to use force to subdue Frye and arrest him, rumors of police brutality quickly spread, and a mob began to form.

When Frye, his brother, and his mother were arrested, the crowd continued to grow larger, and police attempted to break up the mob multiple times throughout the night, being pelted with rocks and concrete while doing so.

Over the next six days, almost 50 square miles of Los Angeles would be turned into a war zone. 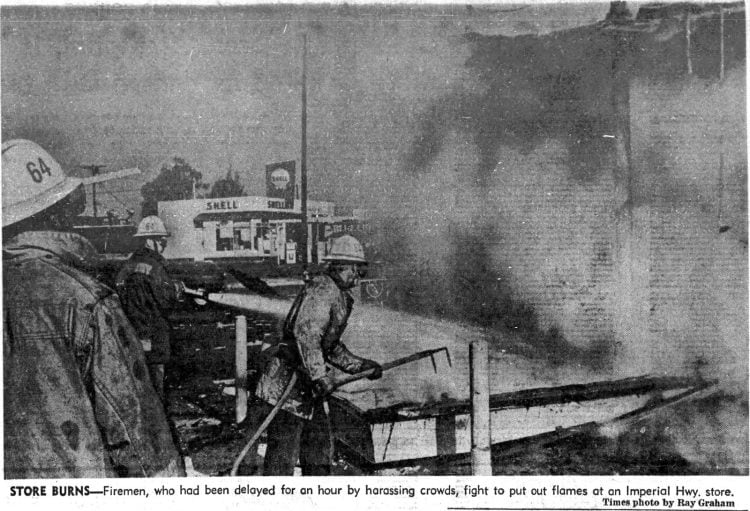 More than 35,000 people participated in the riots that would take the lives of 34 people, injure 1,000 more and result in 3,400 arrests and almost 1,000 buildings burned, looted, or otherwise damaged and destroyed. At least 3,900 National Guard troops were called in to assist police in quelling the rioting.

While not segregated like many southern states, California and Los Angeles in particular, still had racial restrictive covenants which prevented African Americans and Latinos from buying and renting homes in many areas, long after such covenants were ruled illegal in 1948. As a result, many minorities were restricted to living in East and South Los Angeles, including the predominantly black neighborhoods of Watts and Compton.

A report issued in December of 1965 identified the root causes of the riots as high unemployment, poor schools, and inferior living conditions for African Americans in Watts. Recommendations included literacy and preschool programs, improved ties between the police and the community, more job training projects, improved public transit, and more.

Few of these were acted upon, and it seemed that the lessons of Watts were forgotten by 1992, when the Rodney King riots would once again tear the city apart from within. – AJW 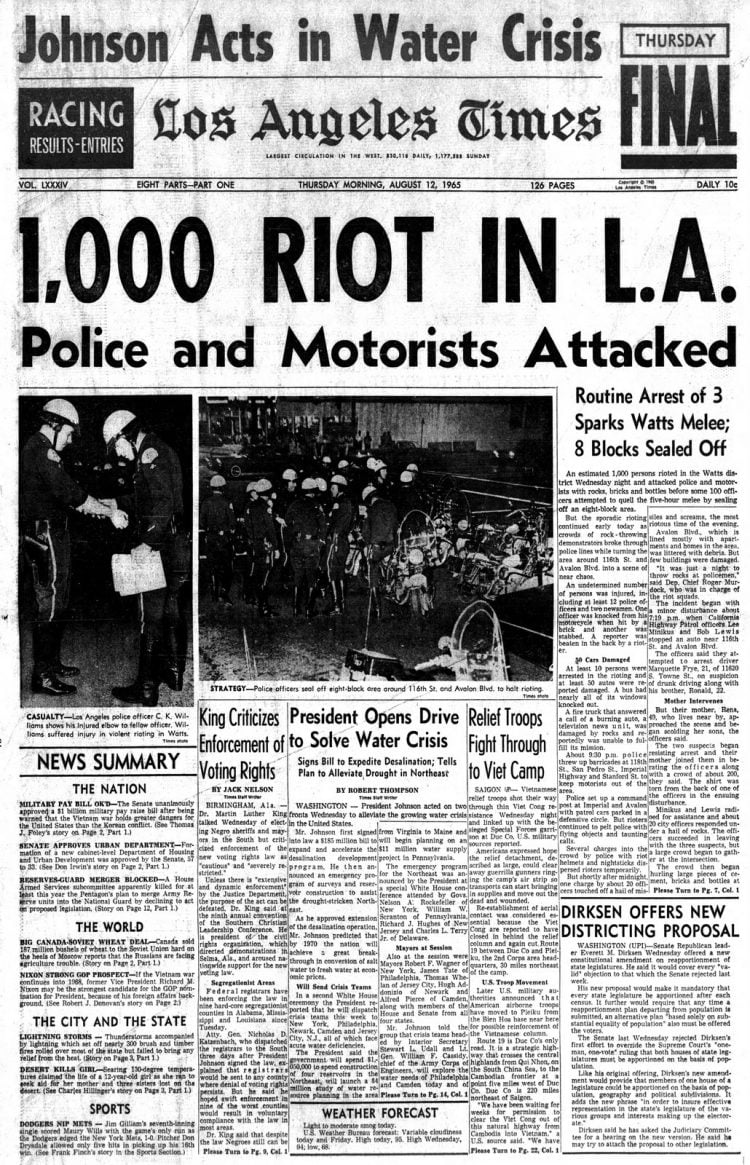 “They’ve been throwing fire bombs all over the area,” said a police department spokesman as reports came in of hit-run attacks from communities in northeast Los Angeles, the harbor area to the south and from the sprawling San Fernando Valley to the north.

“They’ve just about rioted out, we know we have them licked now. We now are dealing with hard core individual criminals who are shooting mainly at law enforcement officers.”

Gov. Edmund G Brown issued a statement at noon saying, “The rioting and looting which the National Guard was called in to help suppress has now ended.” However, the governor added that “this tragedy is now being prolonged by hit-run hoodlums and terrorists… This is now a case of guerilla fighting with gangsters.” 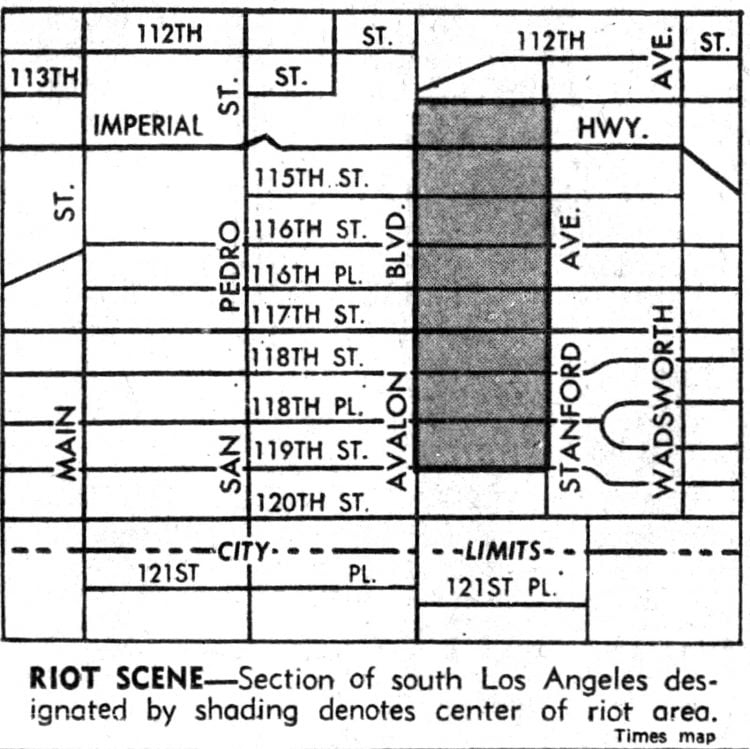 Nearly 3,000 arrests have been made, 800 persons have been injured and damage estimated at from $100 million to $175 million since the riot began Wednesday night. The dead included a police officer, a deputy sheriff, a fireman, and two persons stricken with heart attacks directly connected to the rioting.

Police clamped a curfew on much of Long Beach after a policeman was shot and killed Sunday night. The officers were trying to stop Negroes from stoning cars and another officer’s shotgun accidentally discharged.

Fire bomb attacks were reported on a paper bag factory in Wilmington, a Pacoima beverage company warehouse, an Anaheim lumber yard, and on buildings in El Sereno, Inglewood, and Hollywood.

Five young Negroes armed with shotguns were taken into custody in Sylmar.

An unidentified man was slain in the riot-scarred Watts area where 800 persons have been injured and 2,679 arrested. Two suspected looters were killed Sunday and two other persons were shot to death when they tried to drive through National Guard roadblocks.

The fire department estimated damage at $100 million. Other estimates set the overall damage at $175 million. 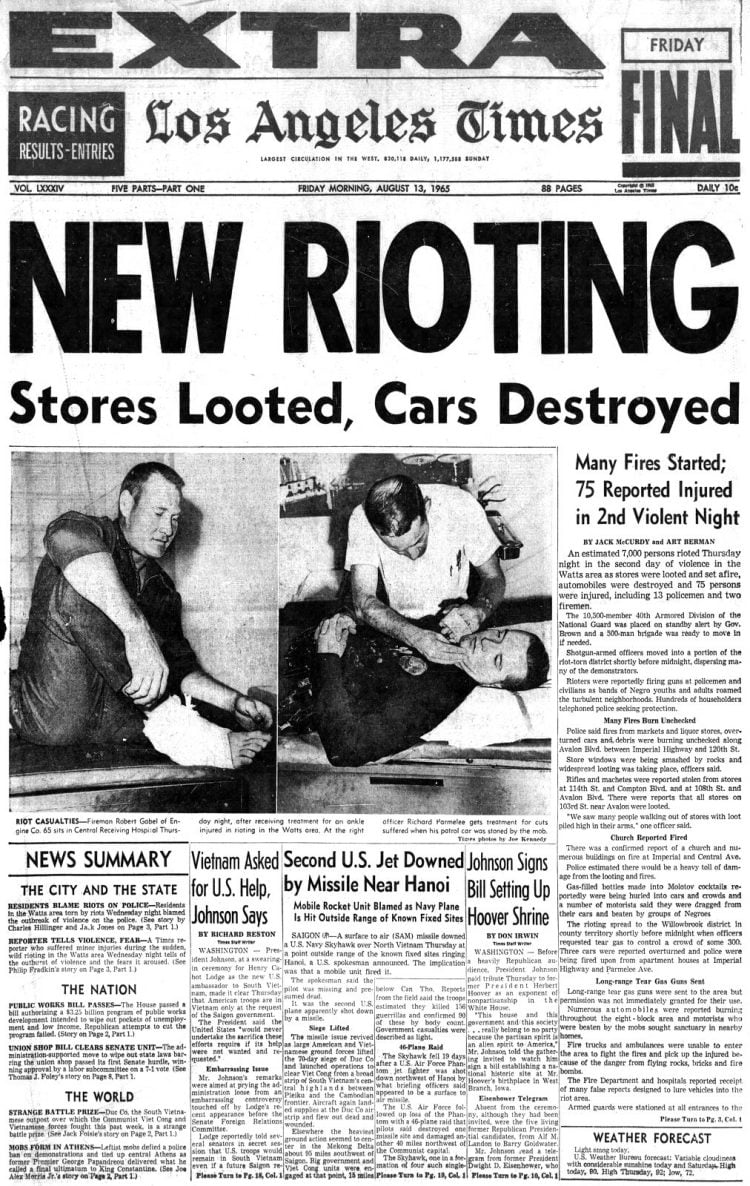 “We know we have them licked now. The main problem is snipers, and a hard core hate group that wants to kill us.”

He was struck in the chest by a shotgun blast when he stepped from his patrol car in a Negro neighborhood to try to stop a group of young men from stoning passing autos. Another officer, George Medak, was shot in the arm and leg.

Police say the officer may have been hit when a shotgun in the hands of a fellow policeman accidentally discharged when he was jumped from behind by three Negroes.

Other minor disturbances were checked at Inglewood and San Diego. Fifty guardsmen were sent to Inglewood, not far from Watts, after reports of armed Negroes prowling in cars.

A half dozen fires — none major — broke out Sunday night, including one in Hollywood. A fire department spokesman said “we believe the fire was riot-oriented.”

Smoke from the last of 1,000 fires set by rioters rose over burned-out shells of shops and stores. Piles of shattered glass littered streets.

President Johnson expressed on behalf of the nation “a deep sense of relief as order is being restored to the frightened streets of Los Angeles.”

But both Johnson and Gov. Edmund G Brown of California, who cut short a Europe vacation to hurry home, said the riots would hurt the civil rights movement.

Governor Brown met privately with leaders of the Negro community and agreed to a request to send food and other essentials into the riot area. 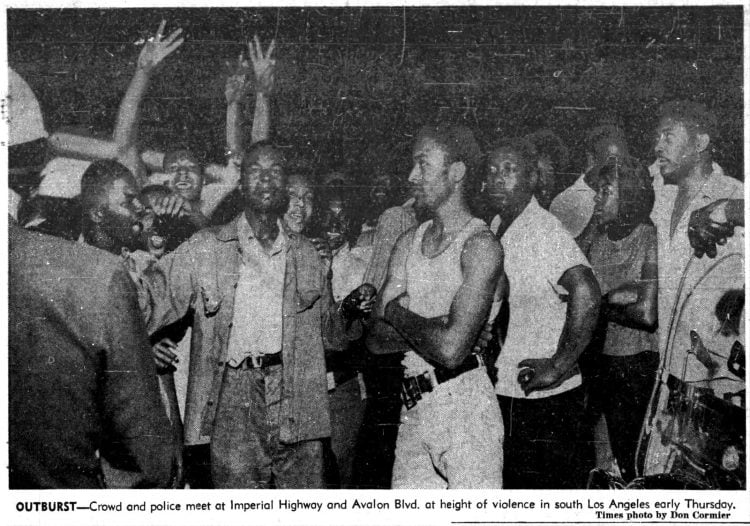 Meanwhile, controversy swirled over the causes of the nation’s worst Negro uprising in two decades.

Chief Parker said it was the result of “coddling criminal and lawless elements.”

He added, “the so-called leaders of the Negro community can’t lead at all,” and added that some of the rioting was being touched off by “meddlers” preaching about alleged police brutality.

A Negro leader, the Rev. H H Brookins, chairman of the United Civil Rights Committee, criticized Parker and his police department for their “bigoted approach.”

Brookins urged establishment of an “unbiased” commission, such as the federal Civil Rights Commission, to attempt to reestablish a “dialogue with those involved and living in the riot areas.”

Al Kuettner, veteran UPI correspondent who has covered major racial developments in recent years, described the Los Angeles rioting as not a racial war but a war against society. 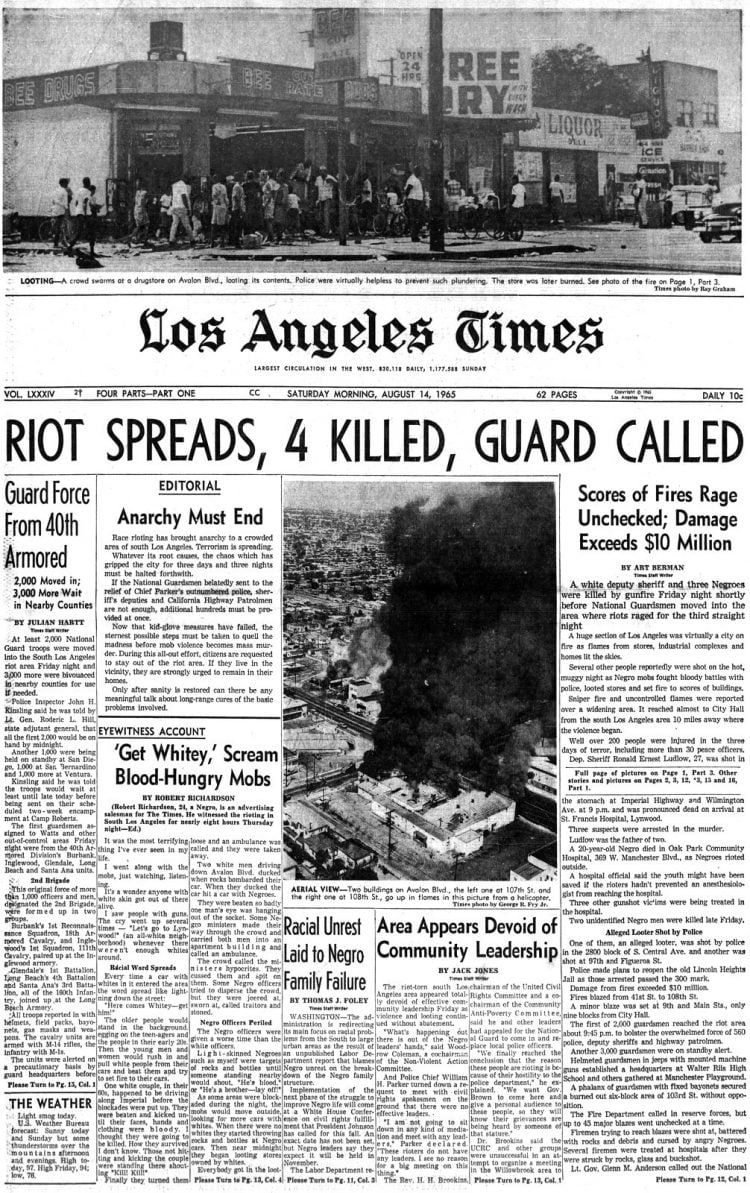 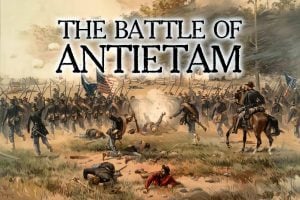 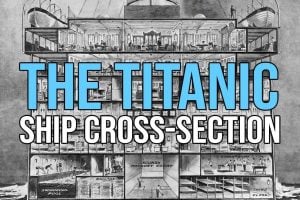 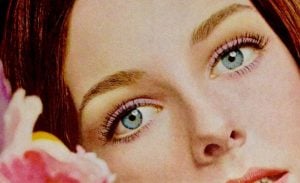 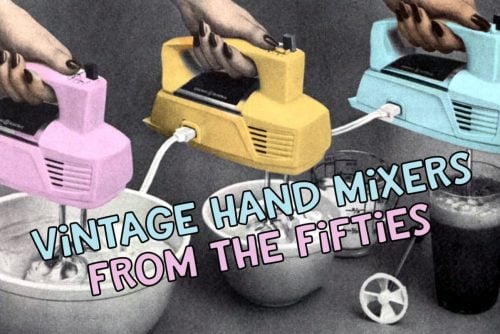 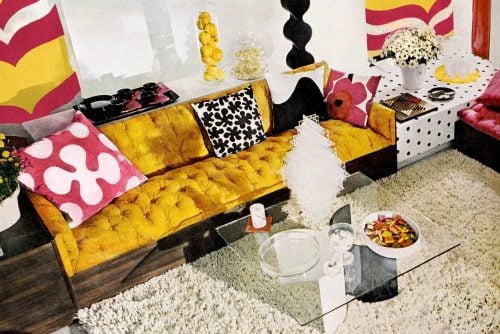 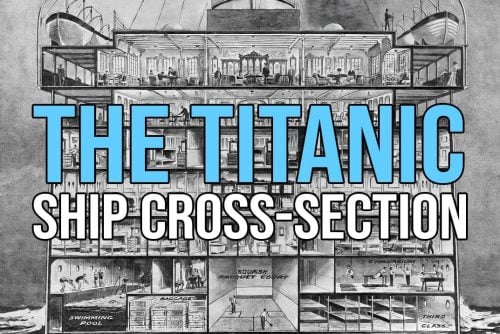