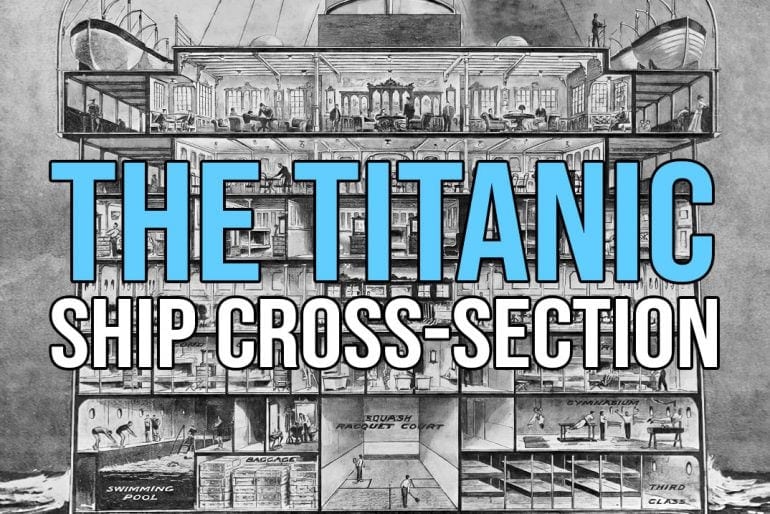 What did the Titanic ship look like inside? Check out these old Titanic cross-section views from 1912 — the week it sank — and get an idea of the size and the layout of the doomed vessel.

Titanic ship specifications (from 1912, but before the disaster)

Fifteen watertight bulkheads divide the great vessel, making her unsinkable even though half of her compartments should be filled with water.

Eleven steel decks add to the “Titanic’s” sturdiness, while an idea of the vast promenading space may best be had when it is noted that the main promenade deck alone has an unbroken sweep of 190 yards on either side of the ship. 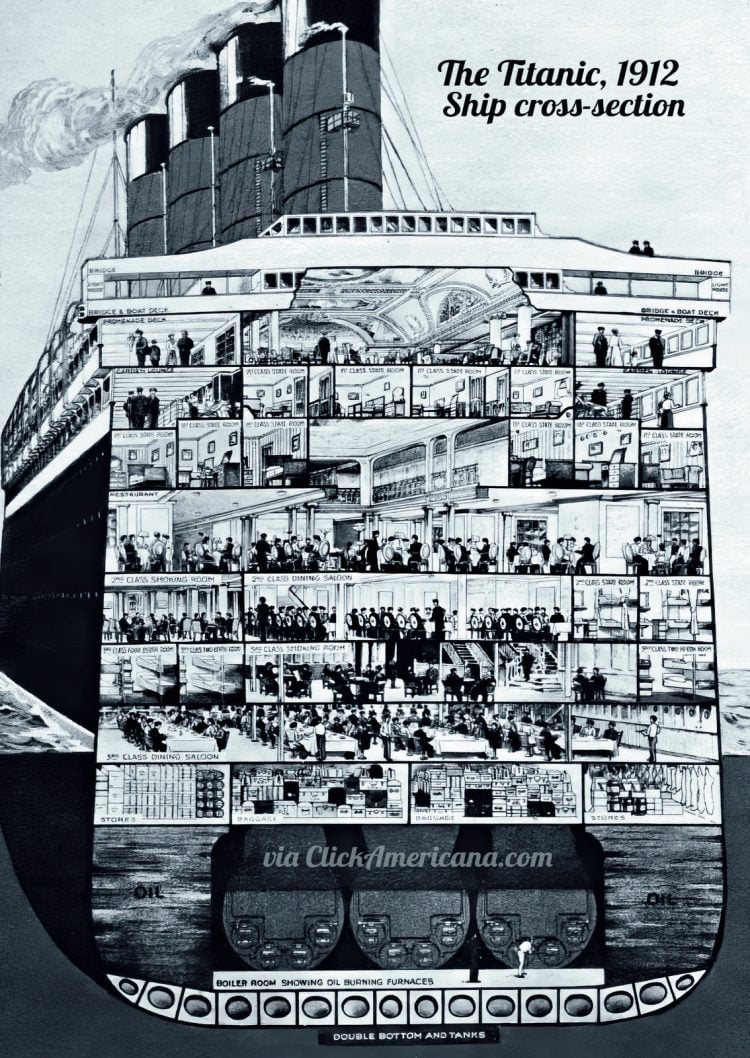 Besides the main dining salon, which has a seating capacity for nearly 600 passengers, there is an a la carte restaurant, French service, which seats 200 passengers, a Parisian cafe and a palm room.

The size of the staterooms is also one of the remarkable features of this ship. Varying from 8 feet to 9 feet, 6 inches in height, they are all roomy. Some of the 2 berth cabins are 17 by 10 feet, 6 inches in size. There are no 4-berth rooms, and a great number of single-berth rooms. 8-1/2 by 10-1/2 feet have been provided.

A great swimming pool, squash racket court, gymnasium and the Turkish baths are all closely together on a lower deck, from which elevators carry passengers to the various upper decks.

Three screws propelled by turbine and reciprocating engines, furnish the motive power of the vessel.

Cross-section view of the Titanic’s length (1912)

A vintage drawing showing the ship’s numerous decks, quarters for officers, passengers, crew and stores, and its immense power plant

Four close-up sections of the above diagram: 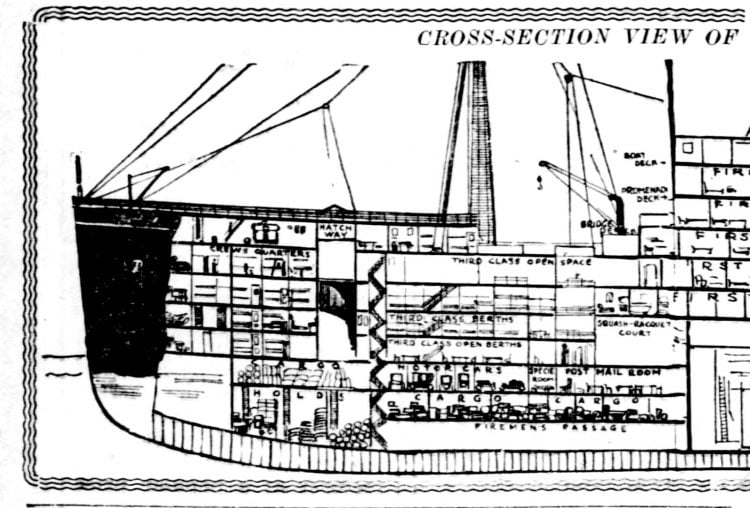 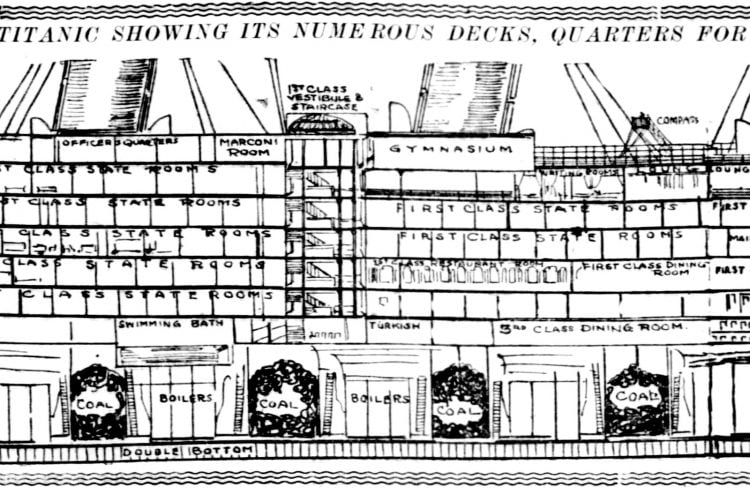 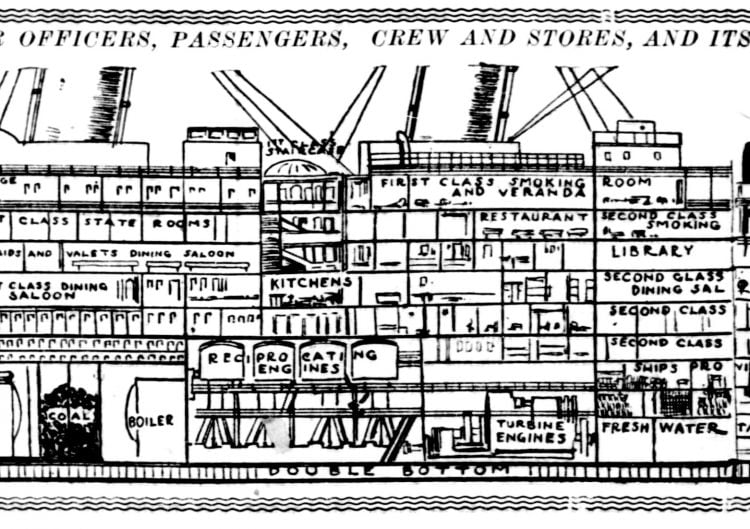 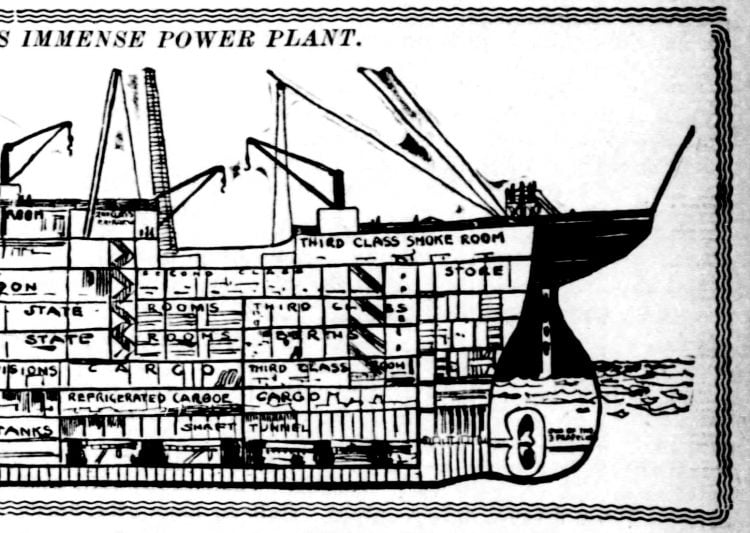 Cross-section of the wrecked steamer Titanic, giving an idea of her tremendous size and capacity.

Imagine, all these decks stretching nearly four blocks long, and you get an impression of the steamer’s ability to carry and care for 2,000 passengers. 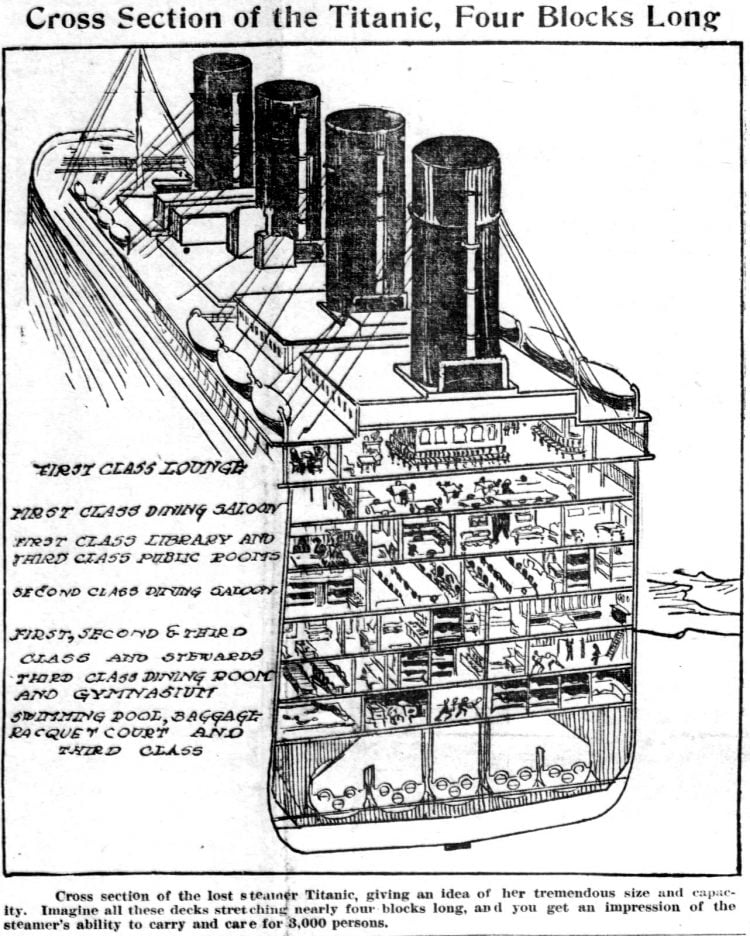 MORE: Inside the Titanic: When the huge ship sank in 1912, here’s what the luxurious interior looked like

Another antique cut-away view of the old ship (1912) 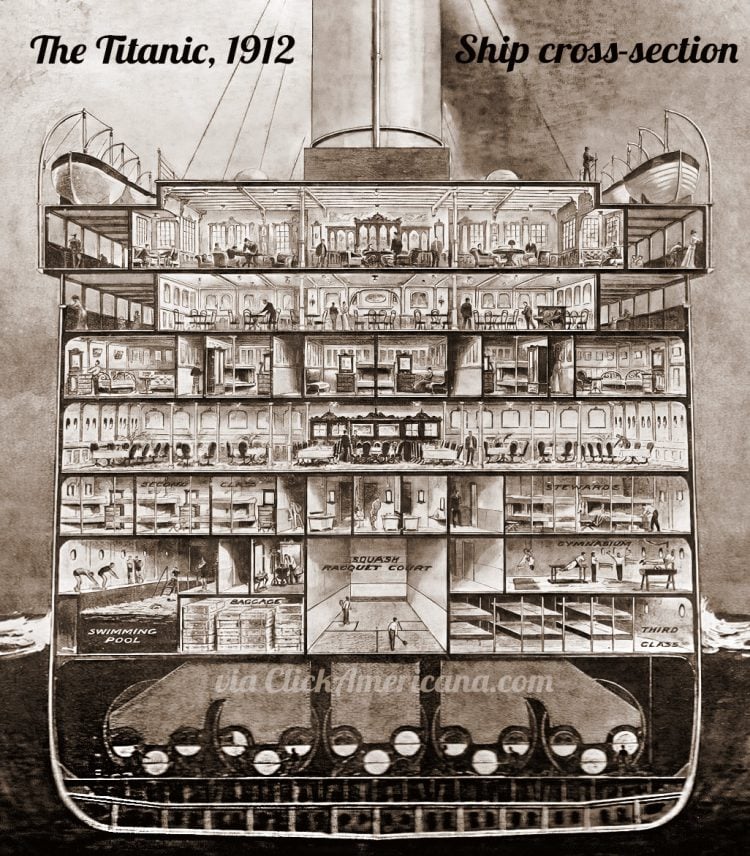 ALSO SEE: The Titanic’s terrifying last moments before sinking to the ocean floor (1912)

Vintage cross-section: A comparative idea of the Titanic’s great size (1912)

If its vast hull were empty, thirty-six full-sized replicas of Hudson’s famous Half Moon could be laid crosswise in it, under full sail, and still leave 270 feet of unoccupied tapering space at bow and stern. 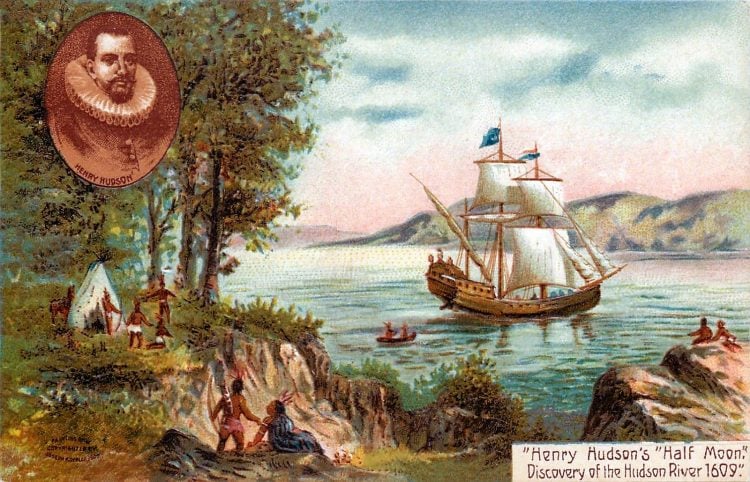 Or, twenty-eight full sires replicas of Fulton’s Clermont could be piled up like cordwood inside without utilizing 282 feet and 6 inches of tapering space fore and aft, where several more could be stowed away.

An ordinary railroad locomotive with tender, and drawing eight Pullman sleepers, could he laid upon the deck abaft the spot near the captain’s bridge, where the artist has cut it in two.

From keel to funnel top, it is nearly as tall as the 10-story Postal Telegraph Building in New York. 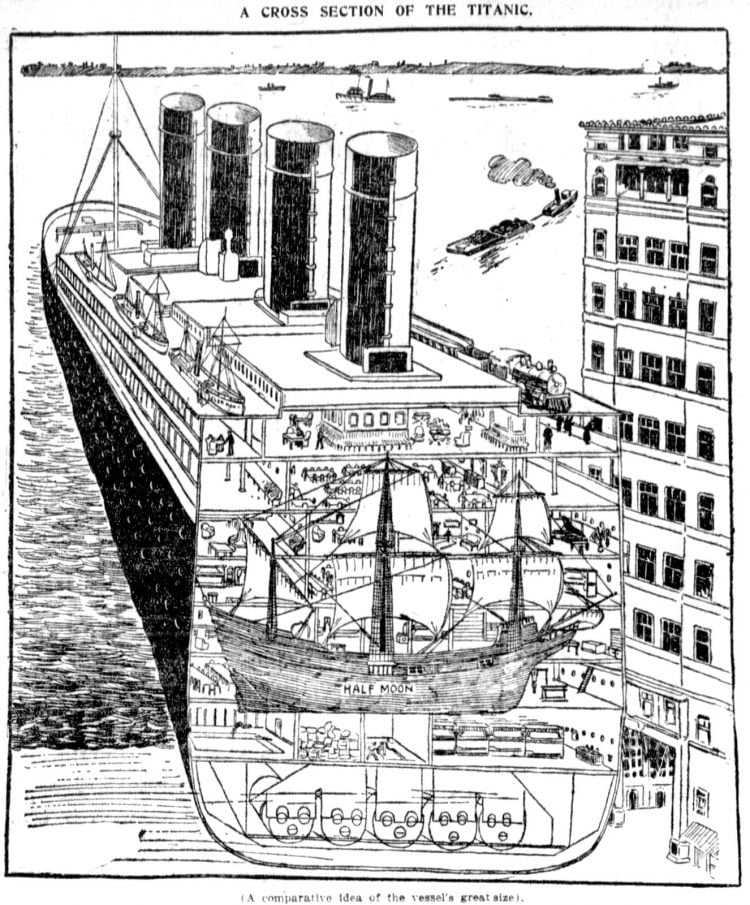 ALSO SEE: Titanic witness says wireless hero died right after the ship sank, and officers to blame for the disaster (1912) 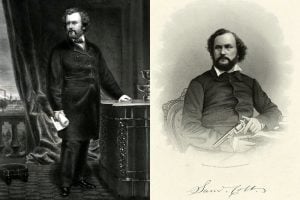 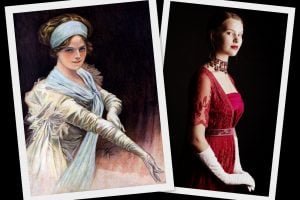