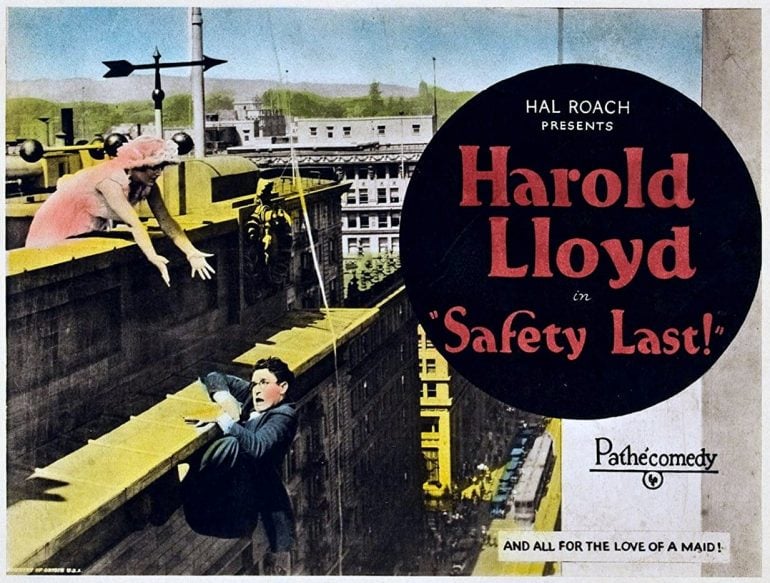 “Safety Last!” was one of the most remembered movies of the silent film era — not because it was apparently hilarious to people at the time, nor was it because the reel featured one of the biggest stars of the era.

What helped it most stand the test of time is the iconic image of the film’s star, Harold Lloyd, doing a stunt that had him dangling off the edge of a building — his grip on a clock hand the only thing keeping him from falling. (Even the hijinks with the clocktower in the “Back to the Future” movies were an homage to this old flick.)

Below, find the entire film, along with some old ads for the movie and portions of a review from 1923 — the latter being so packed with repeated superlatives, we had to edit it for length.

Because, really, who needs a whole page of prose like this: “There are thrills without frills, and thrills that bring chills in ‘Safety Last.’ But what a cure for the ills! The ills of grouchiness.” 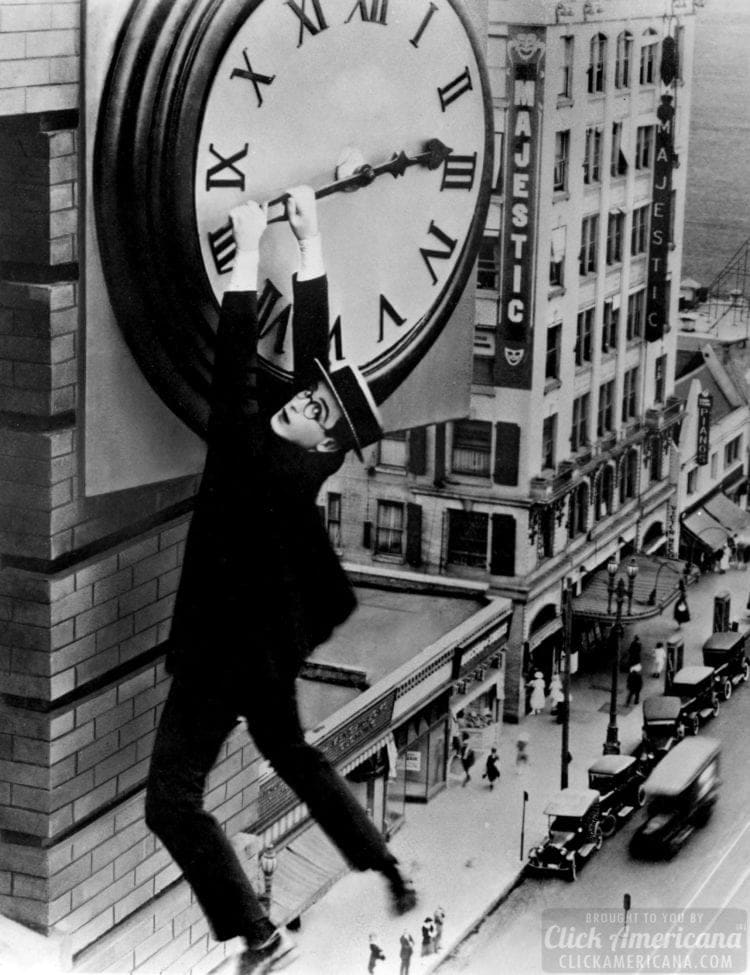 The first seven-reel comedy ever produced! And Harold Lloyd is the Price of Larkers with the Sky the Limit!

The comedy and the building would have to be — for the gales of laughter that Harold turns loose are enough to rock either.

Put the outstanding thrills of all the series ever produced together and they would probably — end to end — reach from the Atlantic to the Pacific, but they would not give such a hair-able, hair-raising, laughable, mirth-raising moments of hilarious thrills as are contained in “Safety Last.”

“Safety Last” also tells a delightfully human story — the romance of a Boy and a Girl. It shows what havoc a little white lie — all for the cause of Cupid — can cause. There are scenes in a department store that are rich with satire. In fact, “Safety Last” brings laughter that lasts forever after. 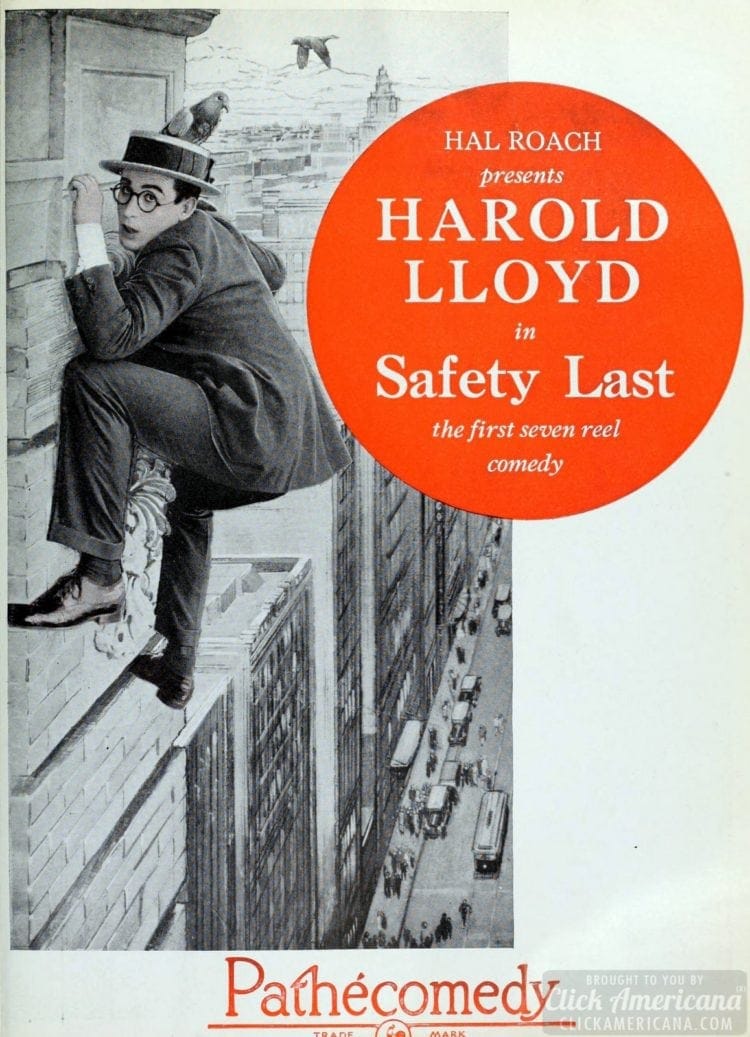 The Boy promised the Girl that he would send for her to come to the Big City and marry her as soon as he was able. The Girl fancied the Boy had become wealthy. Why wait any longer, for he was in danger with so much money!

The store needed publicity. The Boy’s pal was a human fly. One thousand dollars was offered for a publicity idea that the Pals would split. For $500, the Pal would climb to heaven and hang from the Pearly Gates.

Ah, woe! The plans miscarried, and the Boy was forced to do the climb. Twelve stories! Harold did it — but never had anyone faced so many hazards. And “Safety Last” meant wedding bells — and the Girl!

“Safety Last” is a seven-reel comedy in which are incorporated all the possible thrills of Filmdom’s Thrilldom. And Harold Lloyd nearly lost his life in the cause of Laughter and Thrills.

When an insurance agent saw a preview of the picture, Harold also nearly lost his life insurance. He had to faithfully promise never to climb the side of the twelve-story building again. 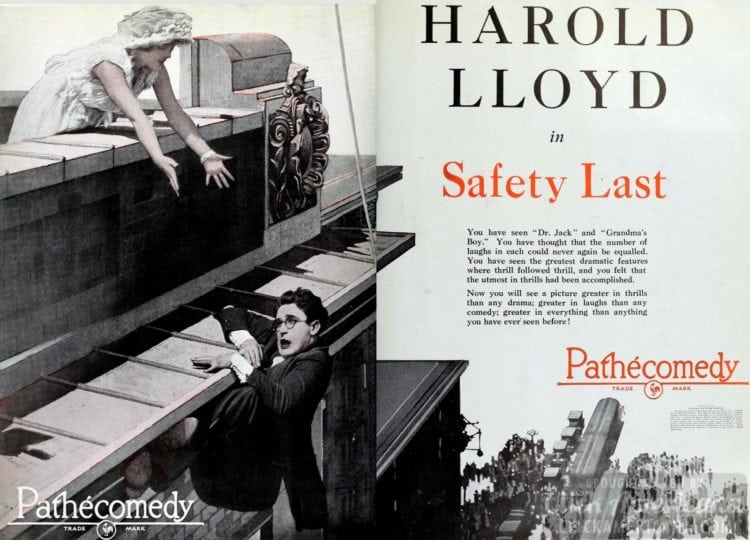 You have seen “Dr. Jack” and “Grandma’s Boy.” You have thought that the number of laughs in each could never again be equaled.

You have seen the greatest dramatic features where thrill followed thrill, and you felt that the utmost in thrills had been accomplished.

Now you will see a picture greater in thrills than any drama; greater in laughs than any comedy; greater in everything than anything you have ever seen before! 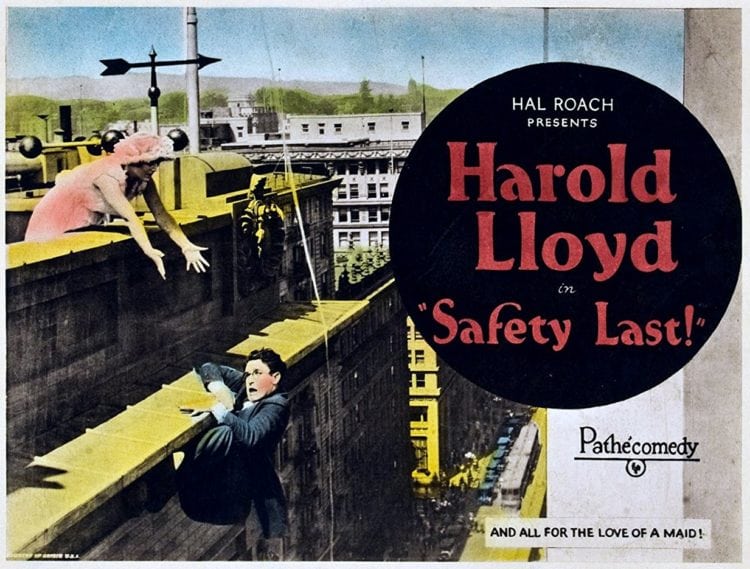 Harold Lloyd and Hal Roach have for years been making comedies that with every picture have been getting better and better.

With each great picture, it becomes harder and harder for star and producer to make one even greater.

When “A Sailor-Made Man” was released every critic felt that the utmost in comedy had been created.

“Safety Last” has accomplished the apparently impossible by being better. It has proven that there are no limits of achievement for Harold Lloyd. 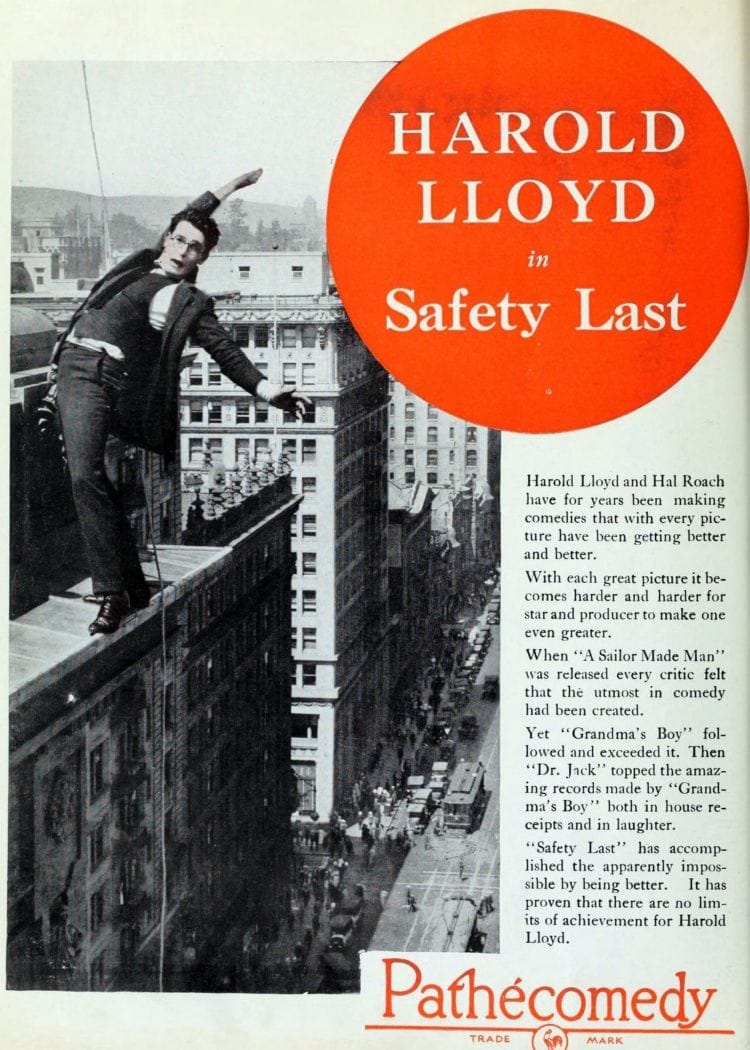 ALSO SEE
Old silent movies: Why so many classic films have been lost 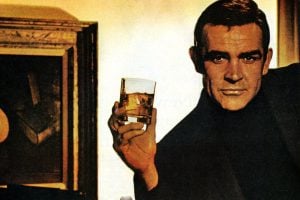 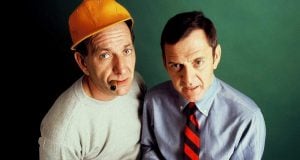 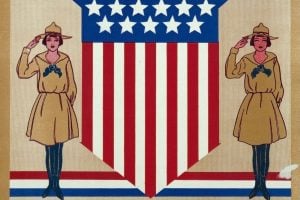