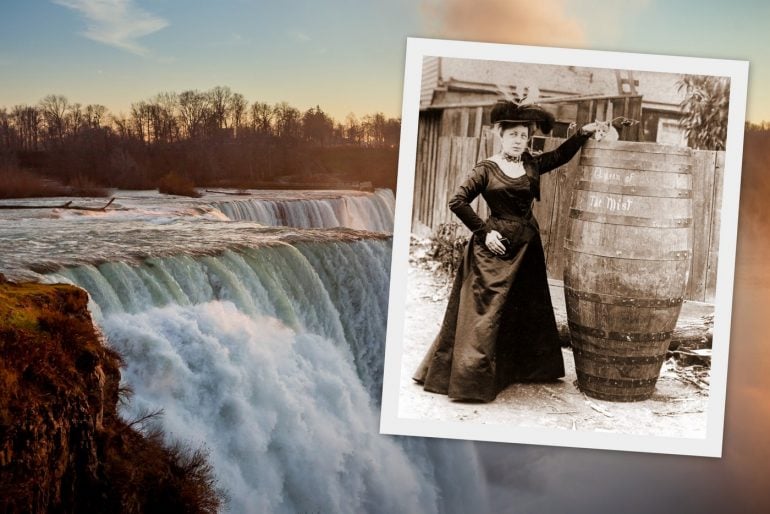 Niagara Falls, Ont. — Annie Edson Taylor, the refined 63-year-old Bay City, Michigan, school teacher, had heard all that boasting by a Bowery tavern proprietor who claimed he went over the falls in a padded rubber suit in 1899. But Mrs. Taylor was never convinced that Steve Brodie had made the trip. The feat simply was not substantiated, the lady noted.

Widowed and nearly penniless, Mrs. Taylor wanted something more than an inadequate teacher’s salary to face the struggling years alone. Fame and fortune would be hers, she thought, if a trip over Niagara Falls in a barrel proved successful.

Her reception in the Cataract City on Oct. 23, 1901, was less than enthusiastic. Cynics laughed off the school teacher as ”a crank and a fake.” 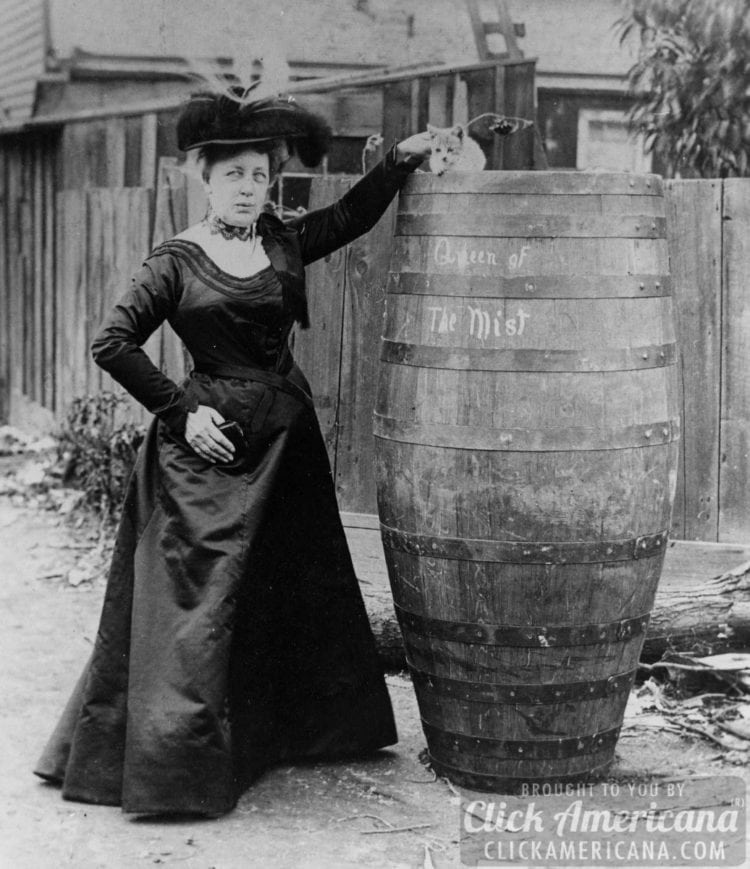 The press, of course displayed the usual interest in anyone threatening to challenge the majestic waterfall. Newsmen and photographers crowded around the oddly constructed barrel — small at the bottom and bound with metal hoops — which bore the impressive legend ”Queen of the Mist.”

MORE: Harry Houdini’s underwater box escape: See how he did his famous trick

One photographer persisted in his request: “Please, Mrs. Taylor, can we get a picture of you wearing the costume you’ve brought to make the trip in the barrel?”

Mrs. Taylor responded with a slight reprimand for the eager photographer: ”Young man, it would be unbecoming a woman of my refinement and my years to parade before a holiday crowd in an abbreviated skirt!”

Thousands of residents along both sides of the border lined the banks for a glimpse of Niagara’s ”newest daredevil” that afternoon of Oct. 23. There was no trace of the barrel coming down the river toward the falls.

Mrs. Taylor hadn’t backed down. It was the veteran rivermen, hired to tow the barrel into midstream, who looked at the choppy waters and decided to renege on their part of the bargain. 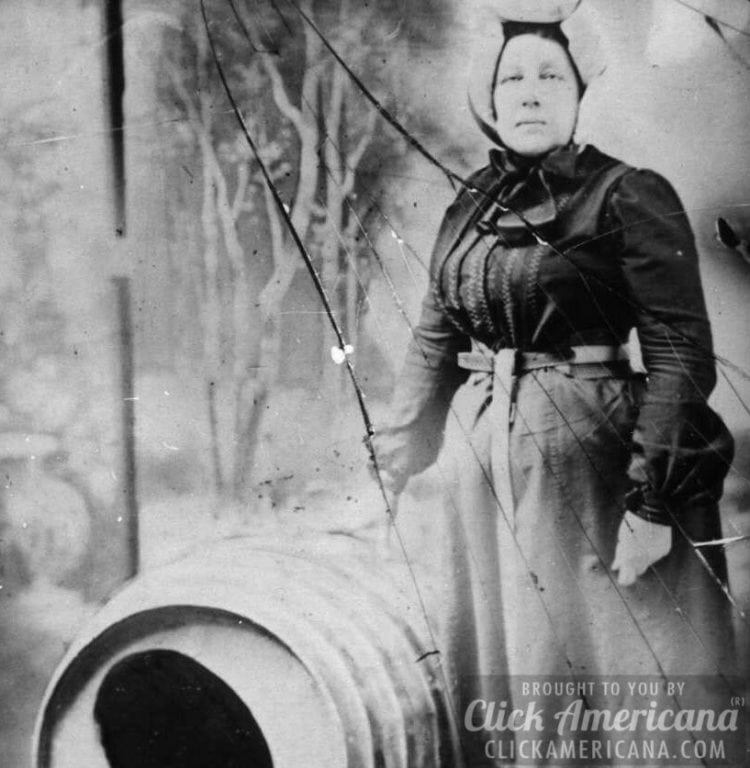 The weeping Mrs. Taylor, forced to cancel her plans for the day, was the immediate target of more barbs from the spectators, convinced more than ever that she was taking them for a ride!

The next morning the river was indeed calmer. And the rivermen were ready to perform their roles, despite the spectators’ skeptism. ”If I say I’ll do a thing, I’ll do it,” Mrs. Taylor said.

To one deep-rooted disbeliever, the school teacher said: ”If I gave my word that I’d stand before a cannon when it was being fired, I’d do that too!”‘

When the crew arrived at. Grass Island, above the falls, Mrs. Taylor instructed her male assistants “to go down to the far end of the island while I get dressed.” Mrs. Taylor slipped on the ‘abbreviated dress,’ which, by the way, extended well below the knees, and then climbed into the barrel before calling for the men to return.

They padded her on ail sides with pillows, tightened up her harness, and pumped into the temporary air supply ”enough gas to last her for a week.” She was then set adrift.

Since the rivermen knew the currents, the barrel was at least in the right channel as it moved swiftly downstream toward the brink. Because of the 100-pound anvil in its bottom, her cask floated in an upright position. At the crest of the cataract, the barrel tipped over gradually, then plunged headlong toward the pool below.

It was nearly 10 seconds — to onlookers it seemed like an eternity — before the barrel reappeared in the spray. Then the cask came into full view, amid cries and shouts from along the nearby banks.

About 17 minutes later it was stranded on a reef off the Canadian shore. Kid Brady, a riverman, hooked it with a long pole. Carlisle Graham helped to saw the top off the heavy oak barrel. ‘”My God, she’s alive,” he exclaimed after looking inside.

Annie Edson Taylor was assisted from the barrel, her place secure in the endless drama along the Niagara. Although thoroughly soaked, her only injuries were slight cuts to the jaw and forehead. Obviously, she was in a state of shock, but after a half-hour of delirium, she seemed to regain her senses. 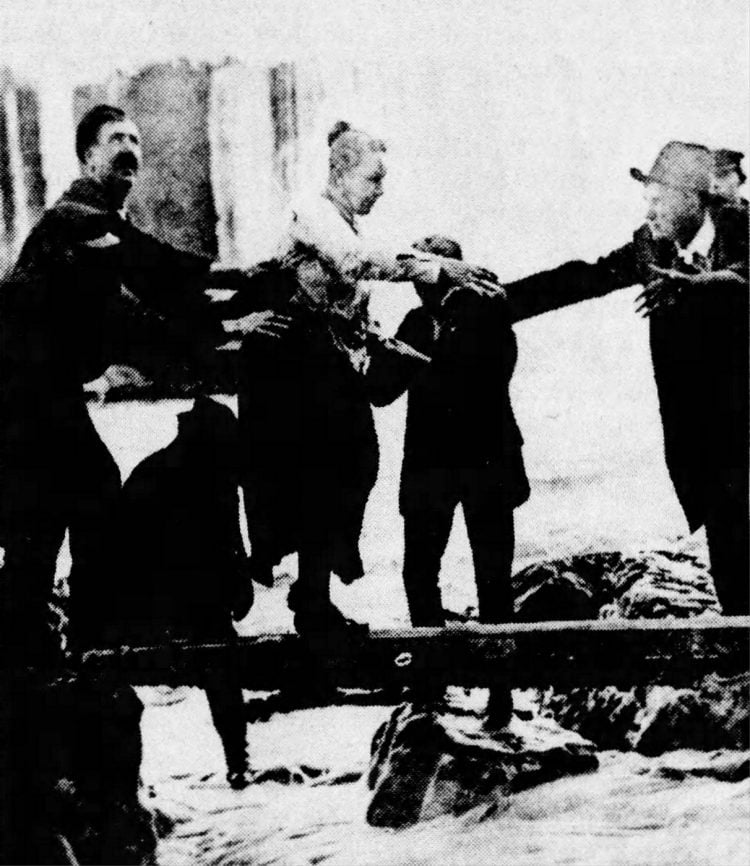 ‘Queen Of The Mist’

The ‘Queen of the Mist’ had achieved the fame she sought from the school teaching days in Michigan. Fortune was the other half of her dream. On several tours of the country, she soon discovered the ”gold at the foot of the Horseshoe Falls rainbow” was apparently lost. Part of the blame was attributed to Mrs. Taylor’s poor choice of business managers.

Before long it became a hard fact for Mrs. Taylor to face: life in the small classroom was immeasurably better than the fleeting fame she had found at Niagara.

In failing health and almost penniless during the winter of 1921, Mrs. Taylor entered the Niagara County Infirmary at Lockport as a public charge. About two months later, she died. The county paid for the burial expenses in Oakwood Cemetery, Niagara Falls, N.Y.

The monument stands as a silent reminder to those countless voices that rejected Annie Edson Taylor on the bright October day in 1901: “First to Go Over the Horseshoe Falls in a Barrel and Live.”

Over Niagara Falls alive: Woman made waterfall journey in a barrel (1901)

While this early news story reports that Mrs Taylor was 50 years old, she was actually 63 when she made headlines nationwide for riding the rapids and careening over the edge of the huge waterfall running between New York State and Canada.

Niagara Falls, NY, Oct. 24 — Mrs Annie Edson Taylor, 50 years old, went over Niagara Falls on the Canadian side this afternoon and survived, a feat never before accomplished and, indeed, never attempted, except in the deliberate commission of suicide. She made the trip in a barrel.

Not only did she survive, but she escaped without a broken bone, her only apparent injuries being a scalp wound 1-1/4 inches long, a slight concussion of the brain, some shock to her nervous system and bruises about the body. She was conscious when taken out of the barrel. 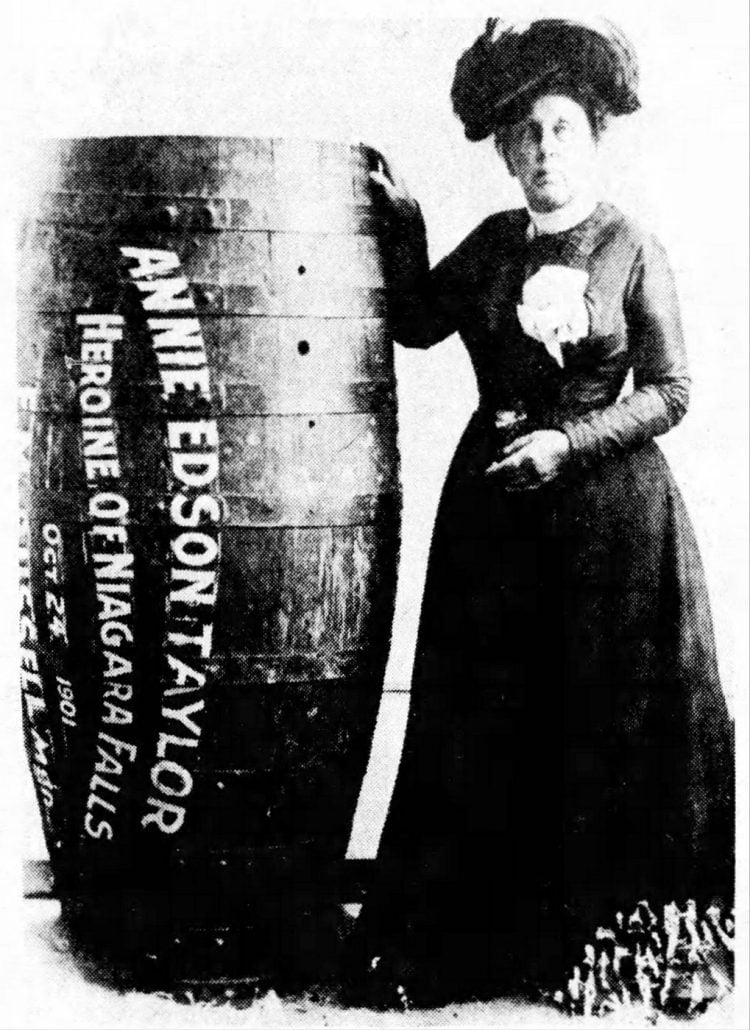 The doctors in attendance upon her tonight said that though she was somewhat hysterical, her condition is not at all serious, and that she probably will be out of bed within a few days.

Mrs Taylor’s trip covered a mile ride through the Canadian rapids before she reached the brink of the precipice. Her barrel, staunch as a barrel could be made was twirled and buffeted through those delirious waters, but escaped serious contact with rocks.

As it passed through smoother, swifter waters that rushed over into the abyss, it rode in almost perpendicular position with its upper half out of the water. As it passed over the brink, it rode at an angle of about 45 degrees. 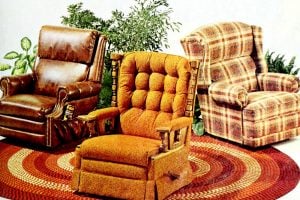 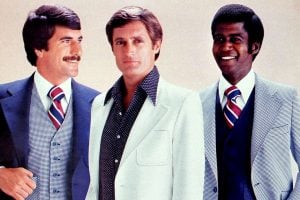 Men’s vintage suits: 60 bold power suits that were essential fashion in the 1970s