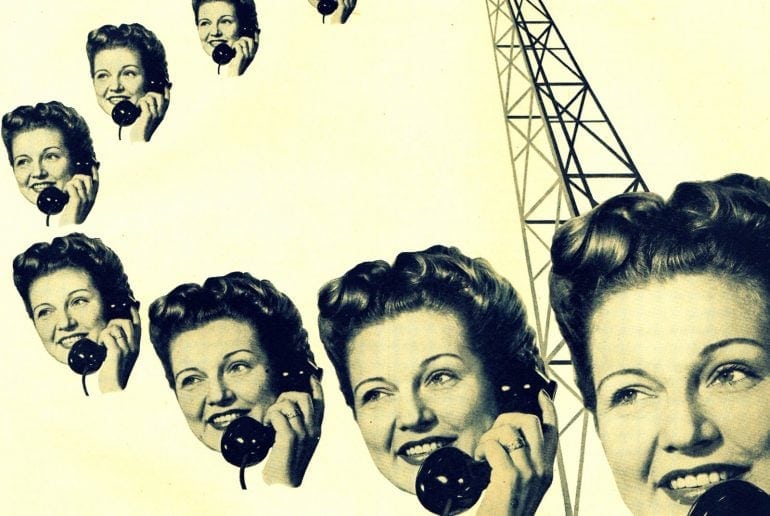 Sometimes it’s hard to remember a time when the entire wealth of the world’s knowledge and up-to-date news and information wasn’t at our fingertips 24/7 like it is today.

Back in 1946, when the internet as we know it was still almost 50 years away, the then-modern telephone, telegraph and teletype services available were cutting-edge tech.

Messages, stock market reports, and even money could be sent over the wires crisscrossing the continent at the speed of light, and there was a person with their hand on every single scrap of info that went out.

This 1946 vocational guidance film gives us a little insight into the world of telecommunications workers at the midpoint of the 20th century, from switchboard operators to engineers. – AJW 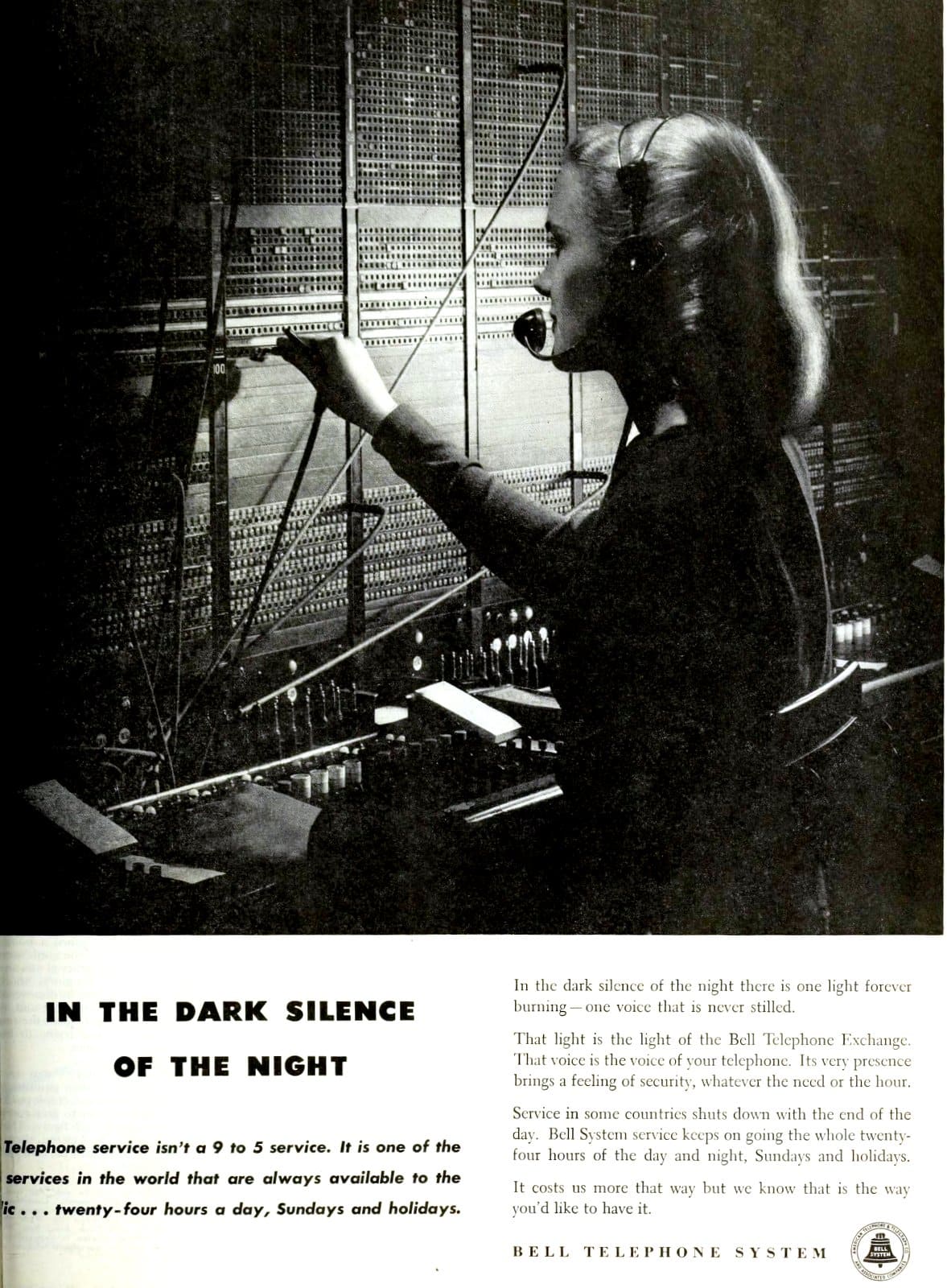 Transcript of the video training film above:

The miracle of high speed wired communication is commonplace today. Lift a telephone receiver, and the world is at your fingertips. Speak and your voice spans oceans and continents with the speed of light.

Right on a Telegraph blank, and your word appear by modern magic on paper thousands of miles. Yes, it is hard to realize that a century has passed since Samuel Morse invented the telegraph in 1844. Early equipment was crude and hand made but telegraphy made rapid progress as years went by and went forward with Americas expanding frontiers.

Today, Western Union operates a vast network of two million miles of wires, furnishing swift, reliable communication. Financial quotations are transmitted from exchanges in key cities to ticker-tape receivers in broker’s offices throughout the United States, Cuba and in Canada.

Each year, many millions of money orders, ranging from small sums to thousands of dollars go over the telegraph wires. Even the nation’s time depends upon wire symbols from the Official Naval Observatory.

Day and night, in editorial offices everywhere, Teletype machines bring in the news of the world for millions of readers. Every year, more than 200 million telegrams pass through the hands of operators in the traffic department. 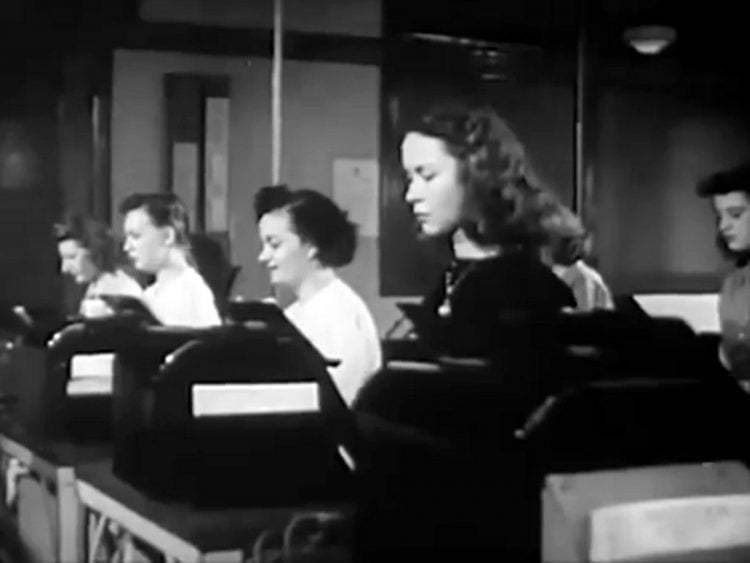 Here in this operating room, hundred of girls receive and transmit messages on batteries of tele-printers and multiplex machines. Those with ability and experience may be promoted to become supervisors on the floor or instructors in the schools, which Western Union maintains in many cities.

Here the trainees learn by practicing on actual equipment. Generally, a high school education is desirable.

The tele-printer keyboard is similar to a typewriter. As the keys are punched, the distance receiver records each letter on a moving paper tape. An operator removes the tape and gums it to the familiar yellow blanks. The letters NL on this tape identify the message as a night letter.

The operator must know how to handle the various classifications, such s day letter, night letter, deferred cable and special listings.

To develop a trainee into a competent operator of the tele-printer and multiplex machines, requires from two to three months.

Job opportunities for men are found in the maintenance of all the transmission equipment and in the operation of the relay offices. In the carrier system department, trained technicians maintain equipment that transmits hundreds of messages over a single pair of wires.

ALSO SEE: What was it like to be a telephone operator? Behind the scenes in the early switchboard days 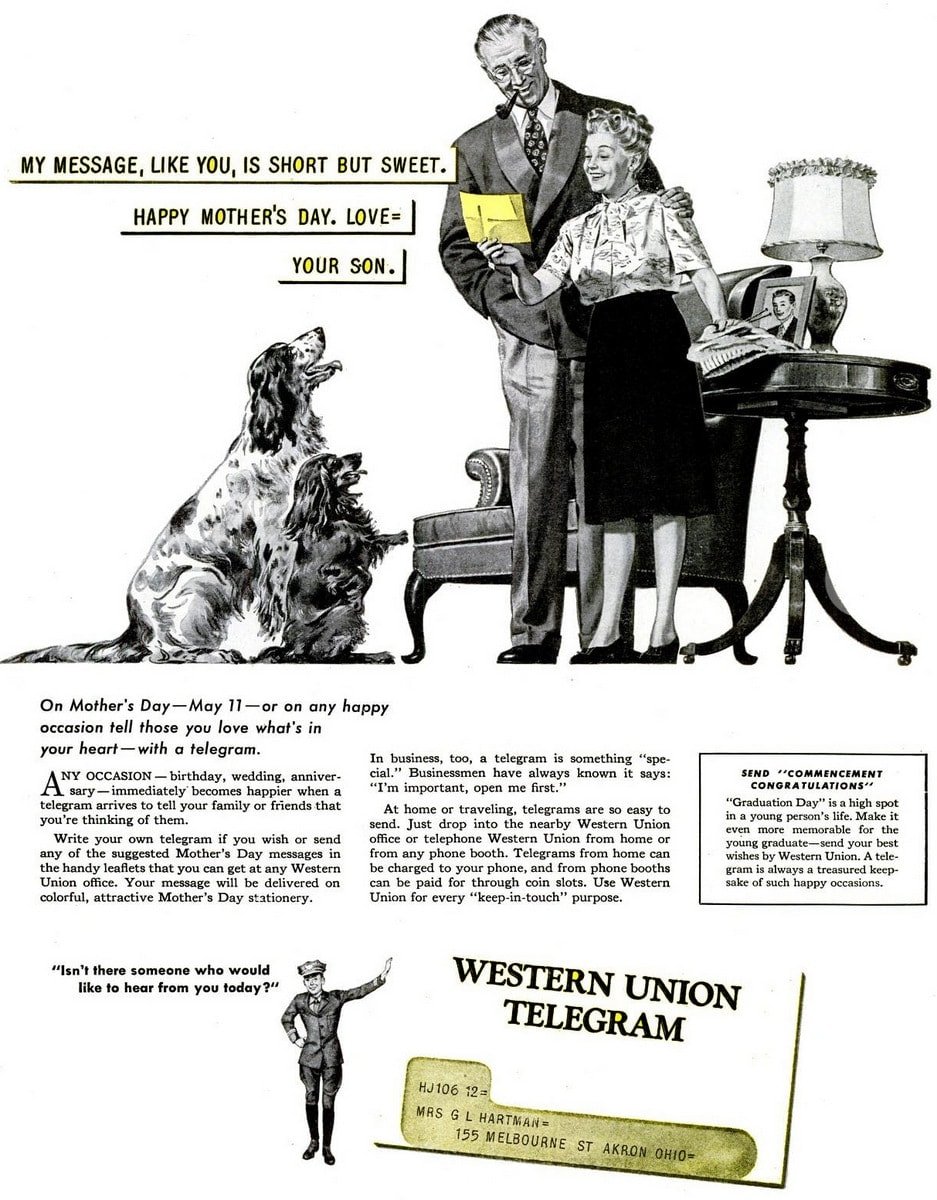 In the experimental laboratories, college-trained research engineer’s work constantly to find new methods and techniques to provide quicker service. One of these developments is radio beam telegraphy. Transmitting 1,040 messages in each direction simultaneously through a series of high towers.

Another is the facsimile telegram, whereby a written message is dropped into a transmitter and automatically reproduced by a receiver. Men also were needed at the switchboards, which controlled circuits between offices and in the supervision of departments as well as general executive positions.

Typical of these is the traffic manager, who is responsible for the efficient dispatch of all messages through the traffic department.

Construction of new branch office and maintenance of existing buildings and properties is the function of the plant department. New equipment is installed and wired by equipment men and installation experts from this department.

ALSO SEE: Vintage fax machines: When this new tech was poised to conquer all in its path (1989) 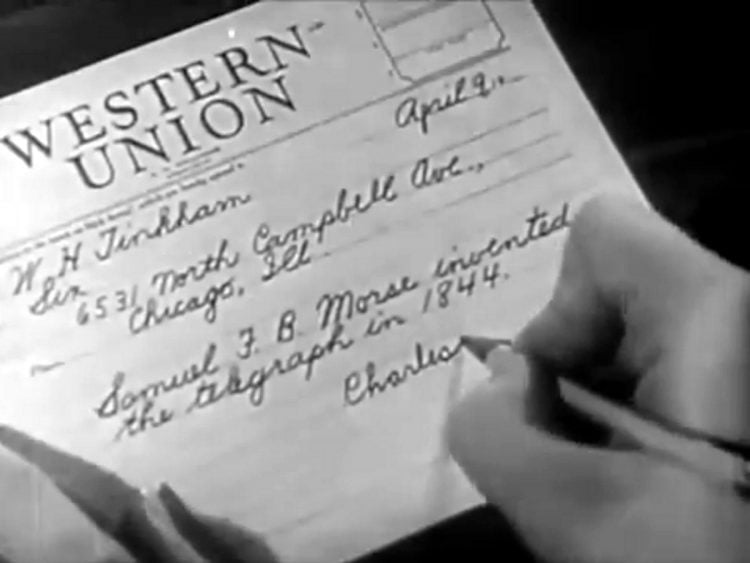 Tele-printer and multiplex machines are in constant use and require inspection by trained testing and regulating men so that sudden breakdowns may be avoided. In the commercial department, they handled most transactions with the public. In addition, this department employs about fifteen thousand messengers to pick up and deliver messages.

Here, excellent opportunities are provided for young men to acquire business training because of the contacts established while delivering messages. More than a million prominent businessmen began their careers as Western Union Messengers.

The scope of the modern telegraph and cable is worldwide. In America alone, thirty thousand branch offices and agencies provide offer opportunities for managers, operators, repairmen, and other trained personnel to render efficient service to the public. It’s a far cry from present-day telegraph facilities the early beginnings of the 19th century.

Similarly, it’s a far cry from the first telephone by Alexander Bell in 1875. 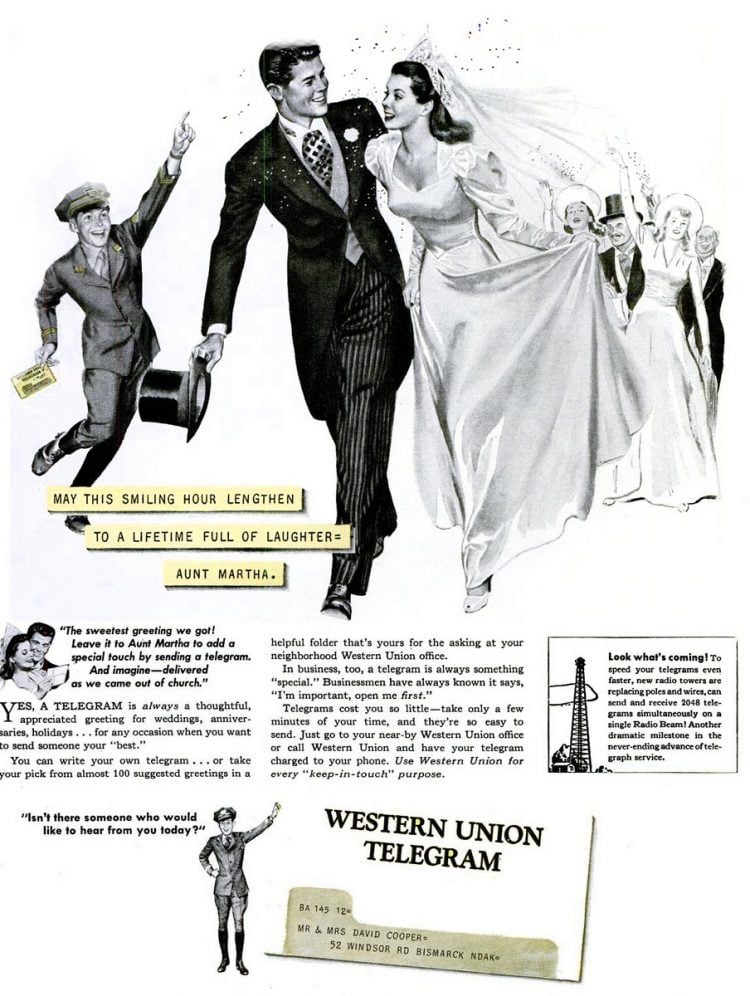 In the early days, switchboards, where operated by men and service, was crude. Today modern facilities handle more than 100 million calls every twenty-four hours. These calls flow at the rate of one thousand per second through a telephone network using enough wire to string a line to the sun, more than ninety million miles away.

This tremendous system provides job opportunities for half a million employees, with a wide range of interests and capacities, from outdoor work with field crews, to intricate research work in the experimental laboratories.

To study these job opportunities, let’s imagine that the town of Homeville is to receive a new and larger telephone exchange.

First, the engineering department prepares the plans for the buildings and transmission systems, and arranges for plant construction. Much of this technical work requires specialized training. Then, skilled craftsmen build lines, install equipment, and maintain it in operating order.

ALSO SEE: Remember calling the phone company for the time? Here’s how POPCORN worked, plus the face behind the voice

After construction is completed, a large number of operators are brought in to staff the switchboard under the guidance of supervisors. These operators have been trained to provide courteous and speedy service.

To be an operator, an applicant must have a clear voice, normal hearing and eyesight. A high school education is an advantage. About 225,00 operators — the most important factor in efficient exchange service — are employed by all companies. They also handle all long-distance and special calls.

Even in communities served by dial telephone and automatic systems, many operators are required for information and special service. With the traffic personnel on hand, the new Homeville exchange is ready for full-scale operation. 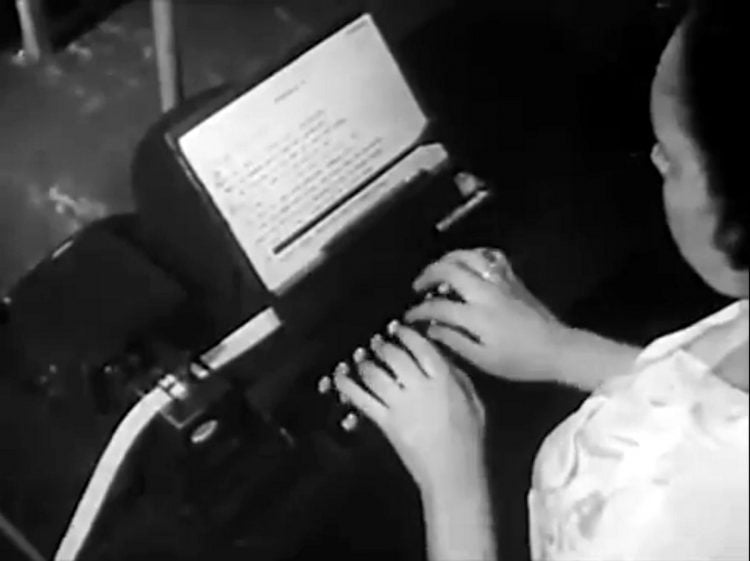 A clerical force is organized for computing charges for service, preparing and mailing bills, and collecting the money as well as other office work. Costs and income are analyzed and statistics prepared for administrative purposes. Now, the new Homeville exchange is a unit of the worldwide telephone network.

To supply this far-flung network with the latest improvements, research engineers in laboratories constantly experiment to discover new techniques, mew materials and quicker methods of production.

The dial telephone, and automatic switchboard are among the better-known accomplishments of these skilled engineers. These are men who must possess the creative mind and an everlastingly curious approach. In addition, they are highly trained in scientific and technical fields.

While a college education is helpful, a young man or women can start in the telephone or telegraphs industries after graduation from high school and work his, or her, way up. For technical work, an understanding of mechanical drawing elementary electricity physics and mathematics is very important.

All new employees in the industries are trained right on the job or in company schools to perform specific tasks. 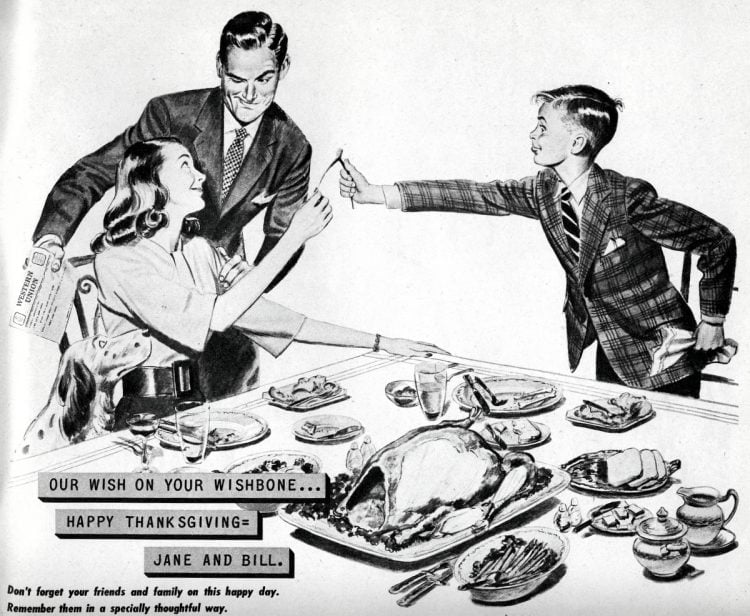 One of these special jobs is that of a lineman. His duty is to help build new lines and repair those, which have been damaged. In the spring and summer, he fights storms of rain and wind. In the winter, there is ice, snow, and freezing gales.

Opportunities in all jobs for promotion are plentiful because most companies prefer to advance their own personnel whenever possible. Dependability is an important factor in judging an applicant’s aptitude.

And just as the public depends on prompt service and communication, the telegraph and telephone companies, in turn, must depend upon reliable, capable employees to keep these nerve systems of our social and economic life functioning properly.

Throughout the country, men and women can find excellent job opportunities in the twin fields of wired communication. These are jobs with stable employment for a wide range of aptitudes and ambitions.

If you were the sort of person who finds satisfaction in contributing to the service of other people everywhere, then telephone or telegraph communication may become your life work. 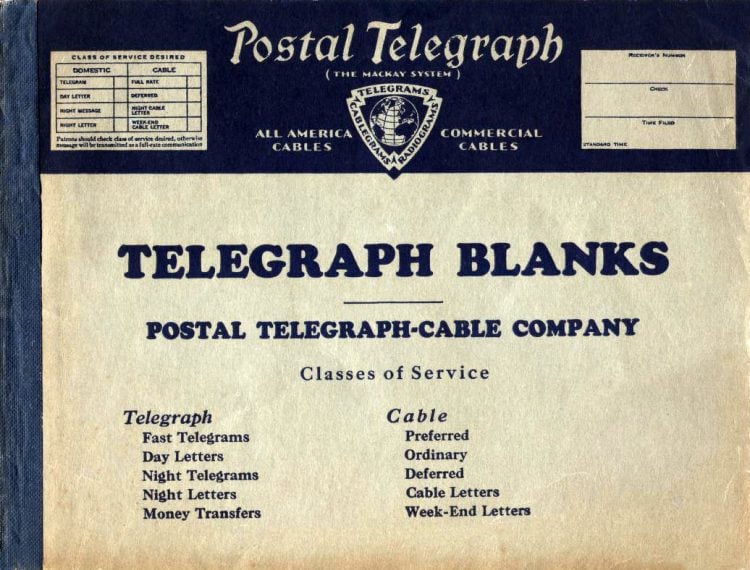 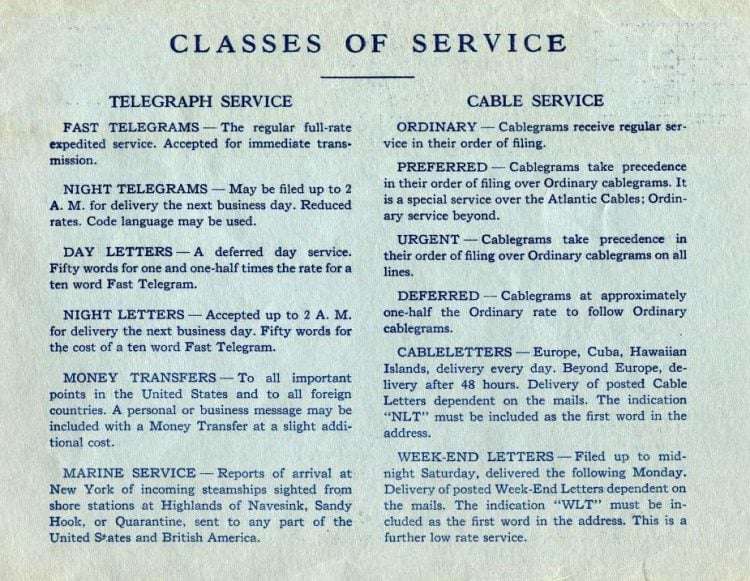 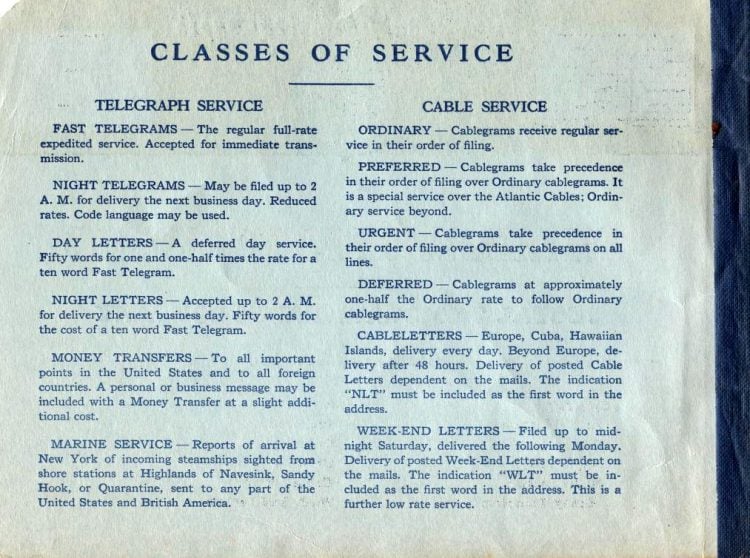 ALSO SEE
Vintage fax machines: When this new tech was poised to conquer all in its path (1989) 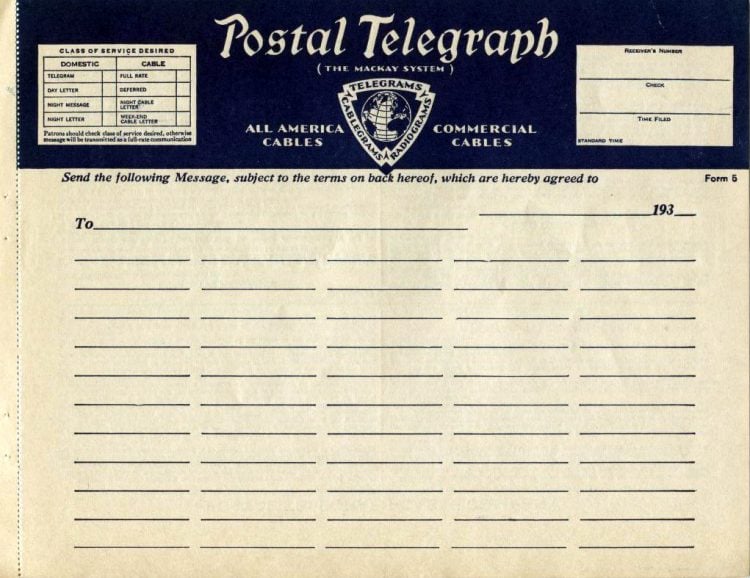 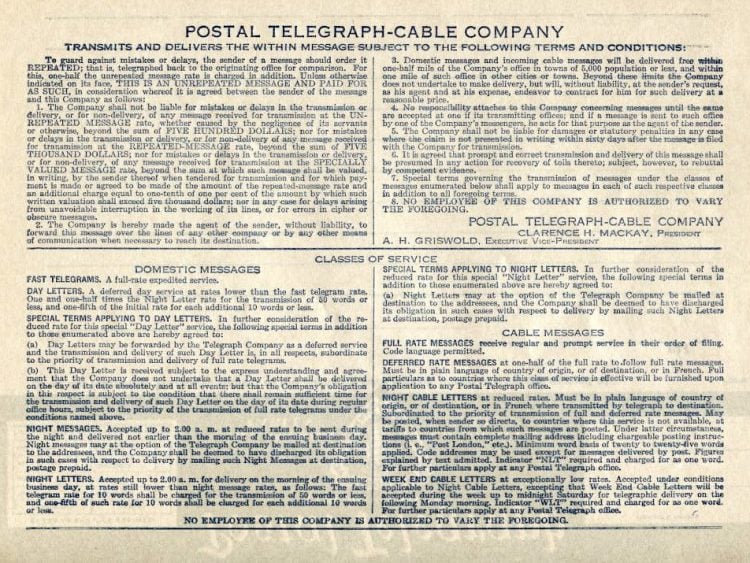 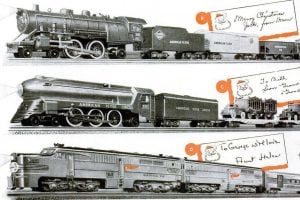