In this adult coloring book, you will find 45 coloring pages with 60 different authentic examples of vintage clothing popular in the early 1920s.

Scroll down to find out more!

The twenties was a decade like no other. Between these covers, you will find 45 coloring pages with 60 different examples of clothes popular in the early 1920s. As you will soon see, the “flapper style” commonly portrayed in movies and on TV really represents just a fraction of what was considered to be in vogue at the time.

While the dress silhouettes were usually sleek, the fabrics and ornamentation used for the clothing often made up for such simplicity.

Patterns — including stripes, stylized florals and other elaborate motifs — adornments like fringe, sequins and other exquisite details were prized. Popular accouterments included parasols, fans, wraps and scarves, feathered headbands and all manner of hats.

It’s time to give these outfits from the Roaring Twenties the color and the verve they have been missing for the better part of a century!

Note: In keeping with the original designs, the pictures are often very intricate, and there are large areas of shading on certain pages. We chose not to over-simplify the artwork because of the tremendous amount of detail (and personality) that would be lost in the process. 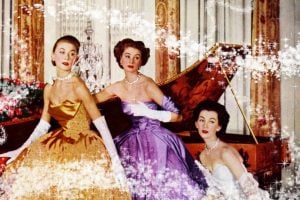