A handsome blond man is running distractedly through the open-air market of an exotic city. Suddenly, he finds himself transported to a tropical river and running over a rope-and-wood bridge as it collapses. He is succored by a woman who wears tribal face paint.

This is rock ‘n’ roll? Well, this Third-World fantasy scene — an abstract conceptual accompaniment to the song “Hungry Like the Wolf” — has been essential in the march toward stardom of the English band Duran Duran. 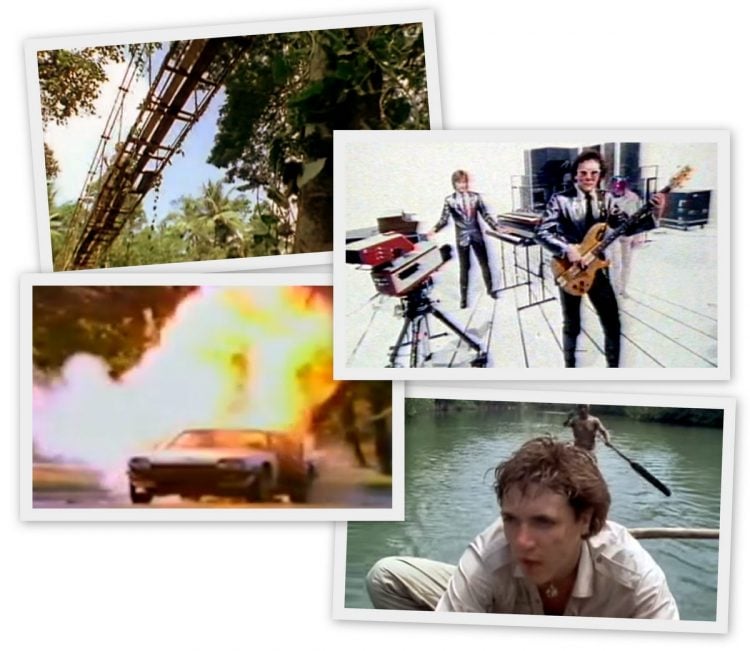 MTV’s viewing audience has grown from 2.5 million to more than 8 million homes on 900 cable systems in its first year and a half.

BUT THIS 24-hour music-and-interview show is only part of the video boom that’s rocking the rock ‘n’ roll business. Rock videos also are shown on pay-TV outlets such as Home Box Office and Showtime. The rock program Night Flight appears to be a programming hit on the USA Cable network. All of these offerings are seen on several of the cable systems on the Suncoast.

Rock videos are shown in music clubs and dance halls, sometimes taking the place of live performers. Music-oriented video discs and video cassettes are now available for the home consumer.

“I believe video’s going to save the record industry,” said Steve Kahn, manager of the audio-visual department at RCA Records. “We have to find new ways to sell records, and I can’t think of a better way than videotapes.”

MTV is essentially a televised radio station. Instead of disc jockeys playing records, MTV has video jocks, or VJs, who appear on camera between visualizations of individual songs. Sometimes, these are simply performance shots or concert footage. But more frequently, artists are opting for elaborate videos that attempt to capture the mood of the song with provocative images.

WITH RECORD companies no longer helping subsidize concert tours by beginning artists, videos have become an essential way of giving the public a visual idea of what’s behind the music.

“It’s the only thing we have that represents us,” said Carole Pope, lead singer of Rough Trade, a Toronto band popular in Canada but little known in the United States. “It’s good to be seen as well as heard.”

Rough Trade made its video for only $5,000 — peanuts as these things go. Guitarist Pat Travers, in his “I’d Rather See You Dead” clip, has a Jaguar sedan blown up.

“The manager had a car he said didn’t work well,” said Ken Walz, a New York filmmaker who directed the video. “He wanted to make a coffee table out of what was left of it, so be donated it. He thought the effect would be spectacular and help his artist.”

Brian Setzer, leader of the suddenly-selling rockabilly group, the Stray Cats, flatly credits MTV with the group’s success (its debut album “Built for Speed” went to No. 2 nationally) after the Long Island band had become hot in England.

SEVERAL MAJOR labels also credit MTV exposure with enhancing the careers of some of their artists.

Later, the band filmed a video clip of a song from the album, “Bringing On the Heartbreak.” A few months ago, said Epand, “MTV put it in its current rotation,” meaning the video clip was getting daily exposure. “This last December, (the 2-year-old album) went gold. It’s over 500,000 and still selling.”

And the video budget for the second album by Duran Duran, mentioned at the beginning of this article, at least matched the amount spent on the recording of the audio disc.

According to one record executive, in the half of Dallas that was wired for cable — which featured MTV and Duran Duran’s two video clips — sales of the group’s second album were significantly higher than in the half without cable.

ALSO SEE
Woodstock: What people said the famous music festival was REALLY like (1969)

Most of the videos telecast on the channel are made by either the artists or the record companies specifically for MTV. None of the video clips are available individually to consumers; MTV pays nothing for using them.

Video or it didn’t happen

Although record companies are not yet in a position to profit from selling rock videos to the consumer, most are willing to spend from $5,000 to more than $100,000 to produce a video for a single song that may help sell an album.

“If you’re not on MTV, or on cable, then to a certain segment of the audience, you don’t exist,” Polygram’s Epand said. “A large share of music consumers are watching these videos as a guide to record purchases.”

Not everyone is thrilled about either the depth of MTV’s programming or the content of the video clips. Last month in Billboard magazine, video editor Laura Foti charged both the video producers and MTV’s programmers with racism and sexism. She declared that the video clips often show “a cavalier disregard for taste, ethics and originality.

“Props such as French maids, mirrors, beds, highly-glossed lips and cheap rip-offs of famous paintings abound, along with violent and sexist themes.”

John Sykes, MTV’s 27-year-old programming director, defended its programming and was philosophical about the content of what is aired. “We don’t play race. We aim at a specific audience — the rock ‘n’ roll music audience.

Looking for a specific audience

“Just because we’re the first (music channel) doesn’t mean that if we put on a potpourri we’d win. We’d lose. You have to focus on a specific audience … A mixed bag won’t work with cable, not when you have 60 to 70 channels.”

Though a number of rock albums (notably the Kinks’ “One From the Road” and Blondie’s “Eat to the Beat”) have been released as video cassettes, sales have been spotty. For one thing, they are expensive — list price for most is around $39.95. More important, the lack of stereo sound on home television is a major deterrent to stimulating the interest of the rock consumer. The advent of stereo televisions may mitigate some of that resistance. 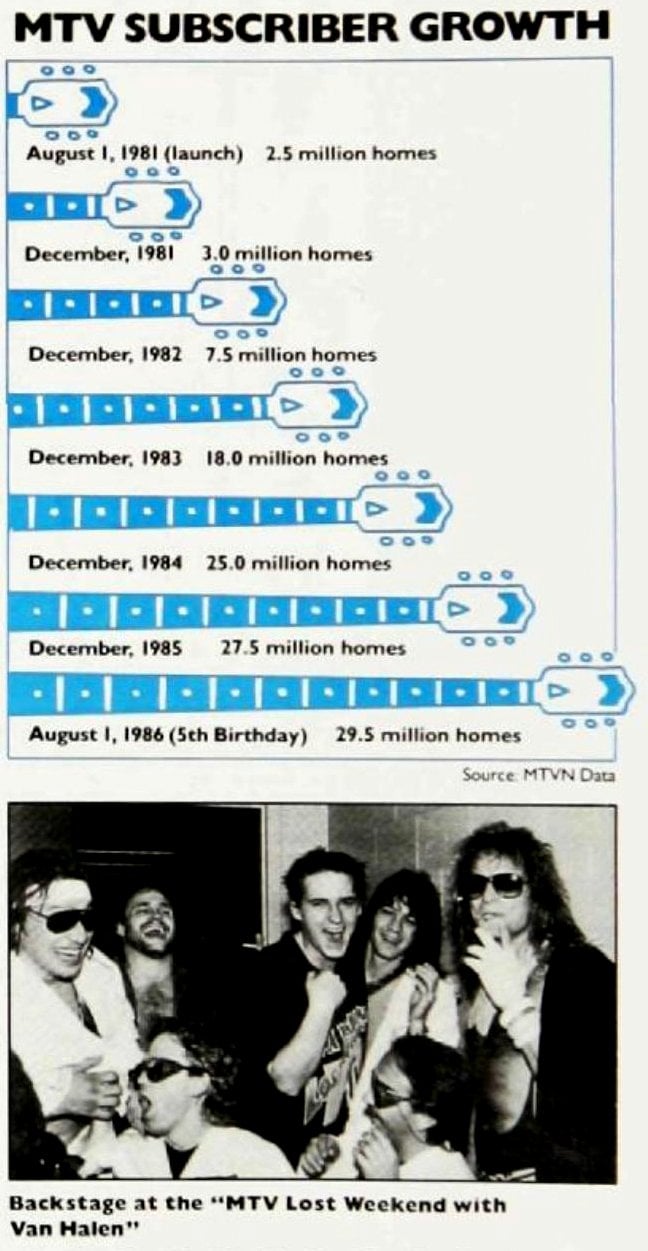 Warner Amex Satellite Entertainment Co., already a pioneer in cable TV with ventures like Nickelodeon, the children’s channel, is breaking new ground with Music Television, an around-the-clock service aimed at the viewer who grew up on rock ‘n’ roll.

Music Television, or MTV, features Video Jockeys as hosts for 24 hours a day of rock videos, concert films, animation, music news and interviews with rock stars. And an inexpensive signal-splitter, wired to the cable input line, will send the picture to the TV screen and the stereo sound through the viewer’s hi-fi amplifier and speakers.

Bob Pittman, vice president for programming for Music Television says he thinks the impact of MTV on television will be as great as the change-over in the 1950s from drama-dominated to music-oriented radio.

“I don’t mean to suggest this will signal the end of traditional television programming,” Pittman says. “But it will have a revolutionary impact on the way the hard-core music fan deals with television.”

Since the advent of FM stereo, people have been listening to their radios all hours of the day. And because audience surveys indicate that the TV is left on seven hours a day in the average household, MTV would seem to be the next logical step — a stereo music channel with a television picture.

Its architects say extensive marketing research was used to determine that the 12-to-34 year-old age group would be the best target for the music channel, which was launched over the weekend.

“We’re not trying to be all things to all people,” says John A Leak, an executive vice president at Warner Amex. “We’re going after the rock audience that grew up on television and music.”

“Rock music is not just a form of entertainment. It also represents a lifestyle, a value system, to that age group,” Pittman adds. “If you’re 50 years, old, you might ask a new acquaintance what church they go to. But if you’re 30, you’d ask what kind of music they like.”

Rock videos — film or tape clips of bands performing their latest recordings — have enjoyed great popularity on European television for several years, and are showing up with increasing frequency on late-night TV in the US. Pittman says the channel will begin with a library of 400 videos, almost twice the number of records on the average radio station’s playlist.

Although MTV will originate some of its own programming, most of the videos will be provided for free by record companies, who will be eager for the prime audience exposure the music channel can provide. The package will be offered to local cable systems, and in turn, the audience, at no extra charge.

Cable systems, who will get promotional stipends and a chance to add two minutes of local advertising an hour, are signing up like crazy, says Pittman.

And advertisers, who will be able to reach the perfect market for stereo components, records and designer jeans at a fraction of the advertising costs of network TV, are signing up, too.

“Times have been hard for the recording industry, but this could issue in a boom period,” Pittman enthuses. “The networks have been scared to death of rock music, but we can do it because we’ve singled out the perfect audience.” 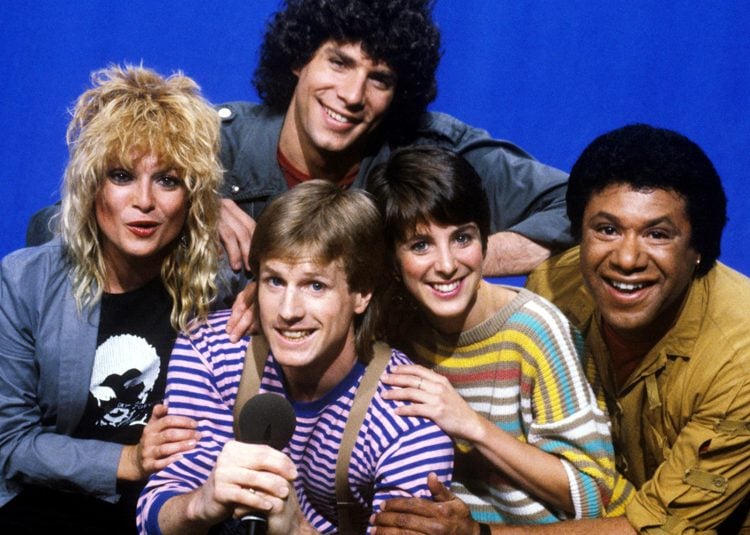 As featured in a special ad section in Billboard magazine – Aug 2, 1986 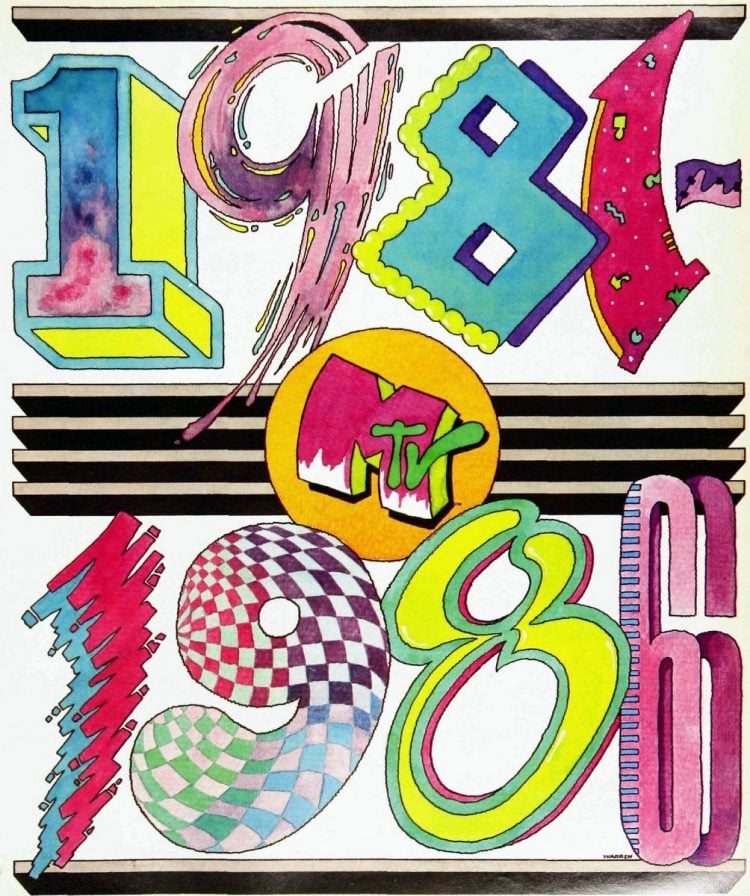 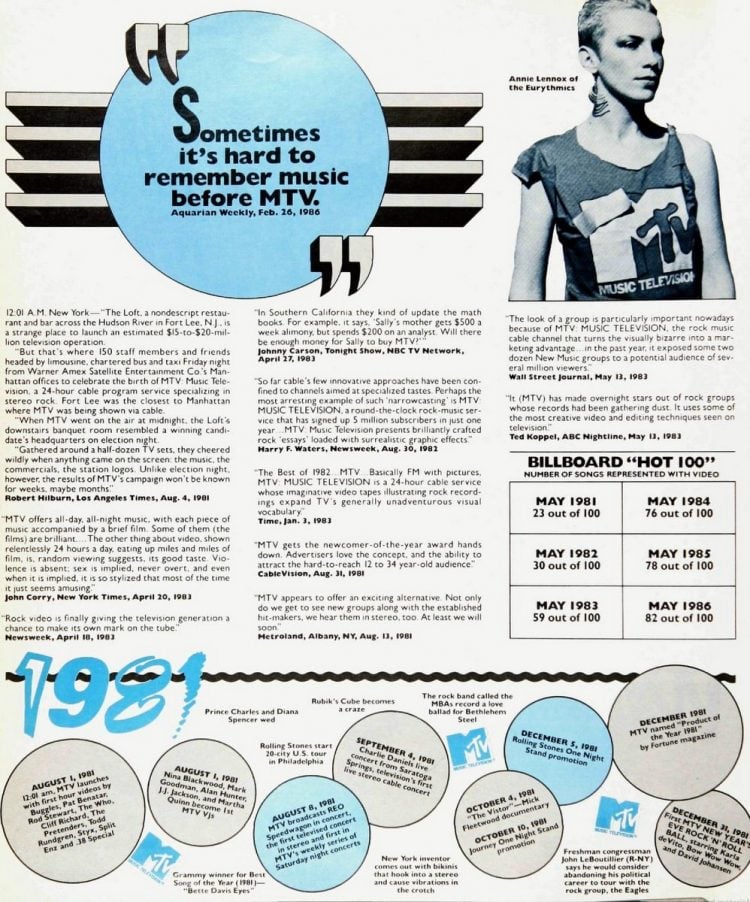 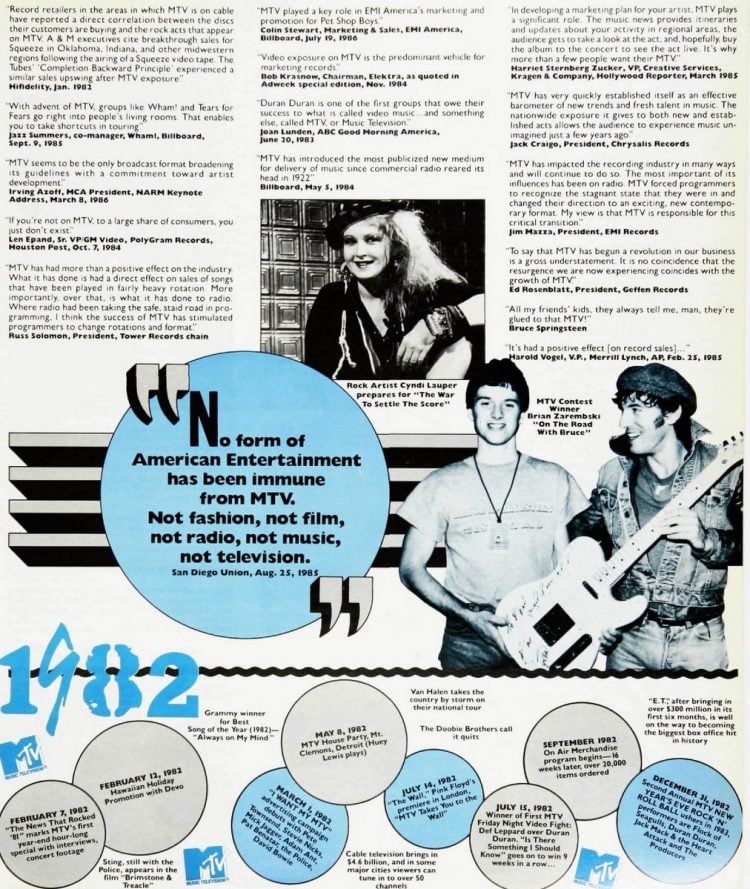 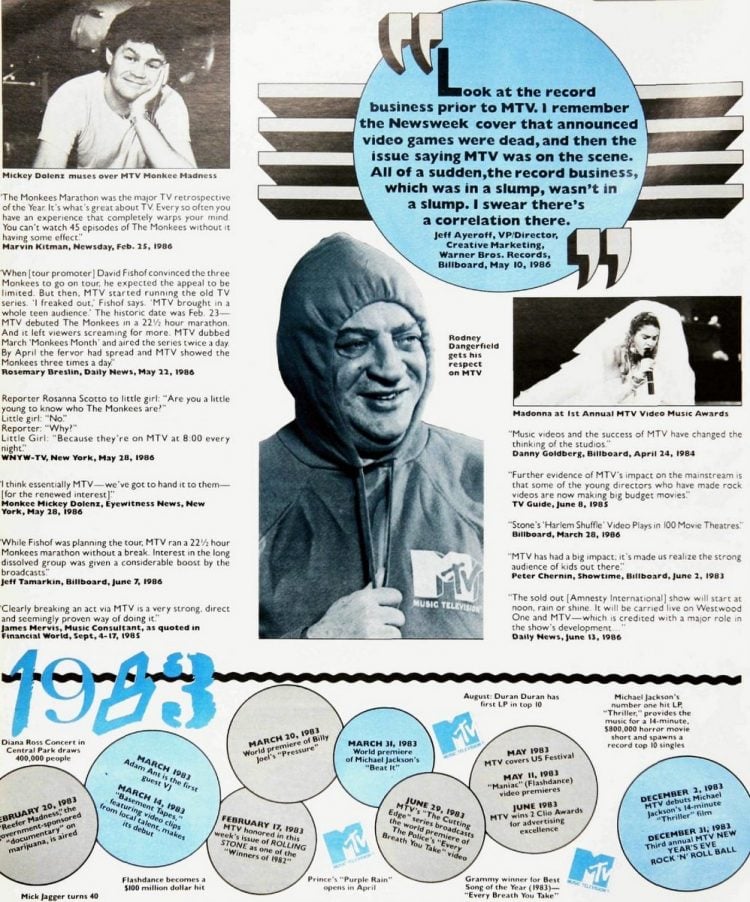 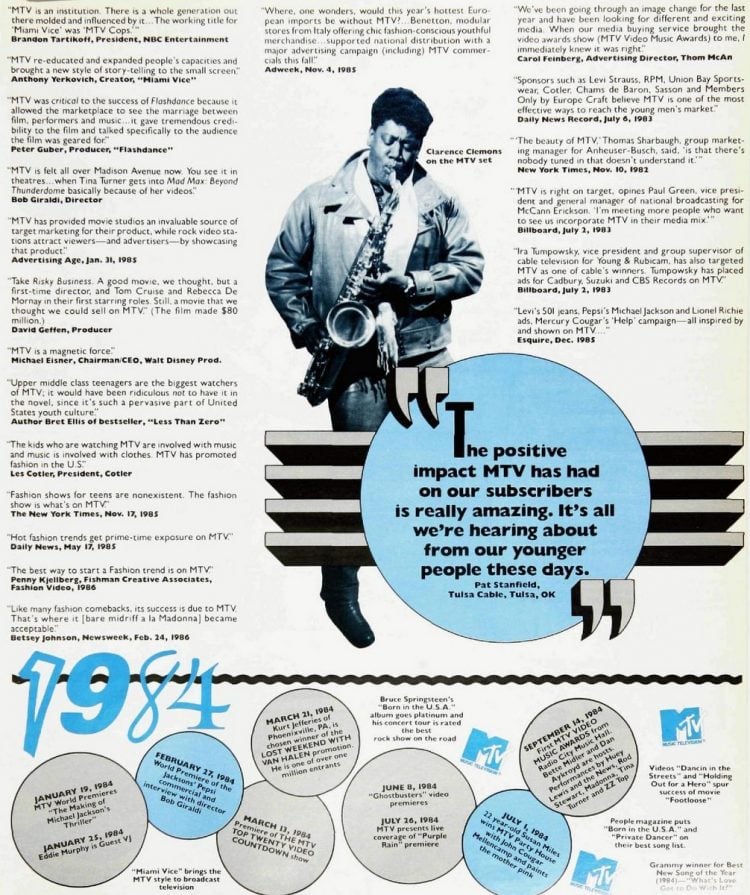 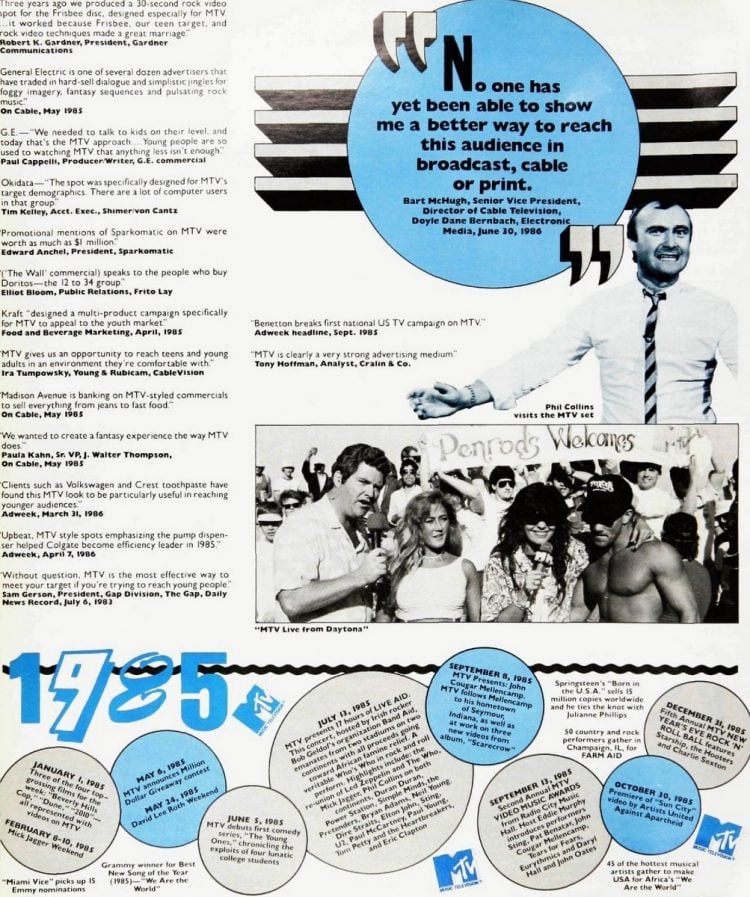 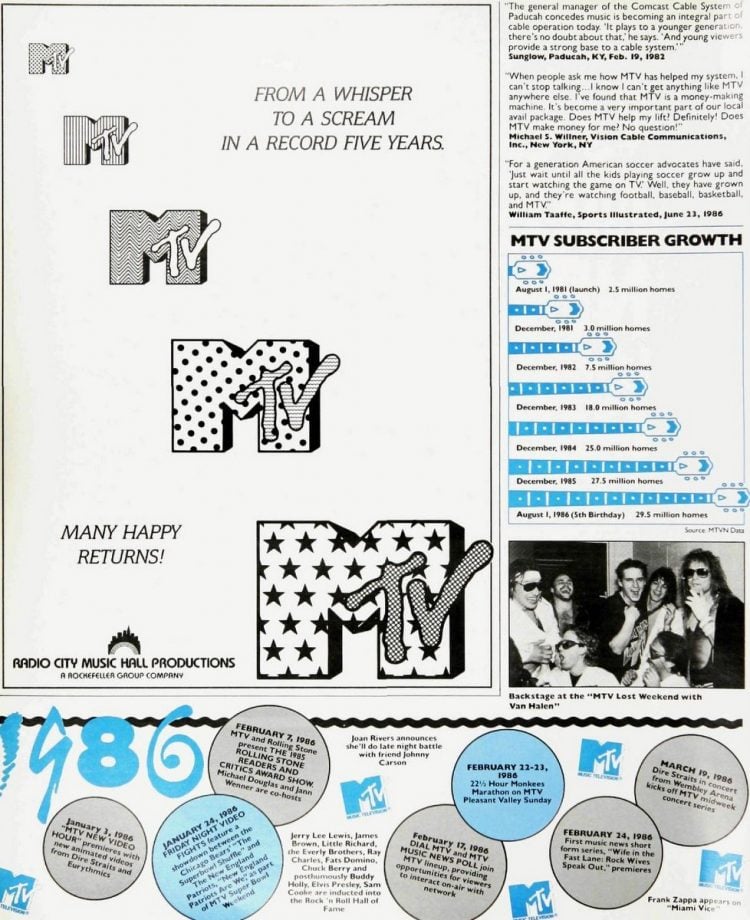 MTV thanks the music industry 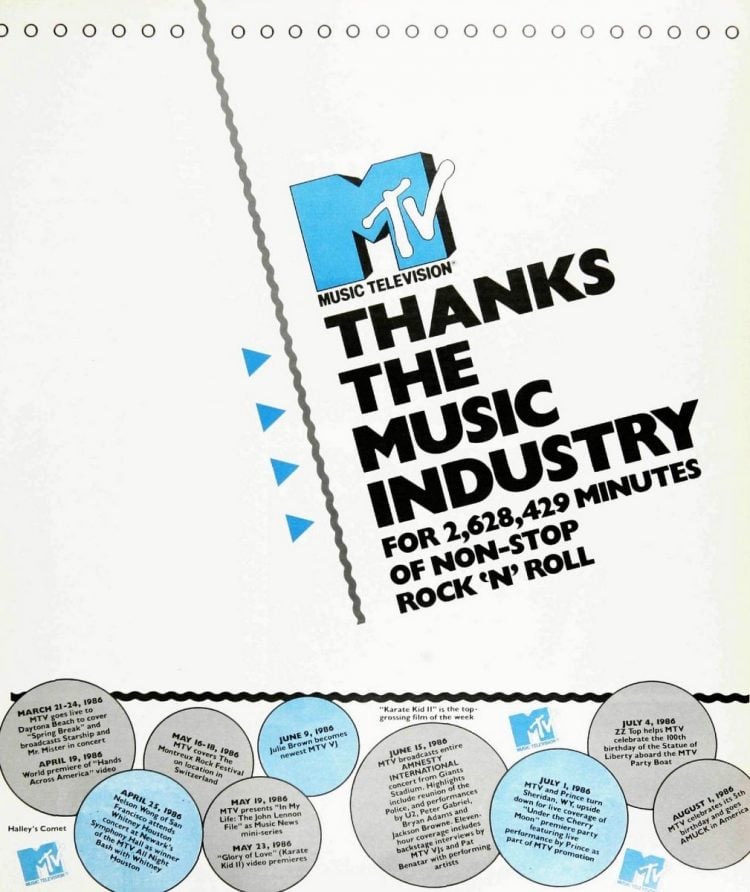 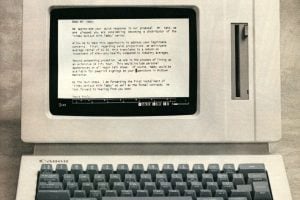 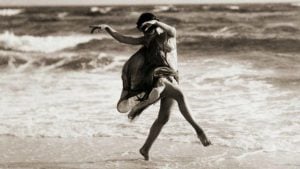 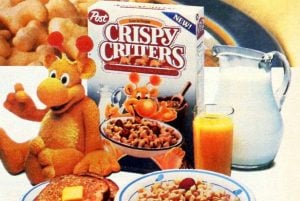