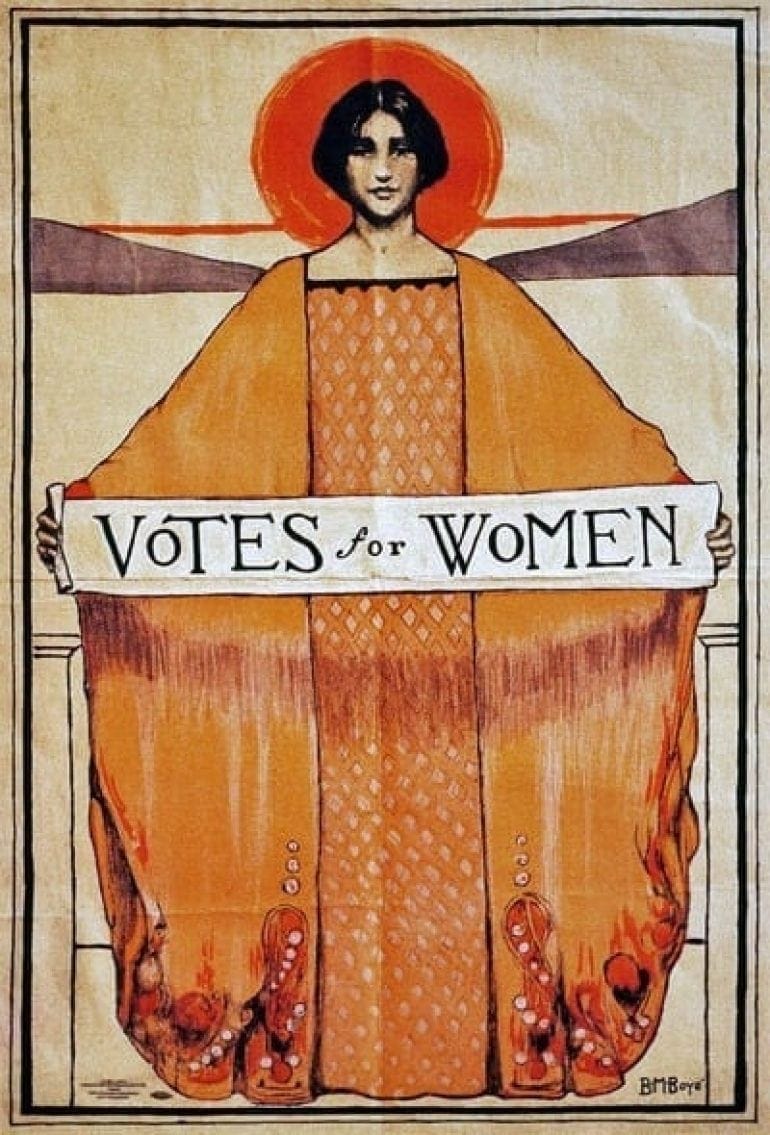 In 1911, The San Francisco Call took a stand on the issue of women’s suffrage — and they weren’t at all on the fence about which side they chose.

Their support of Proposition 4 of 1911 (herein referred to as Senate Constitutional Amendment No. 8) was part of what led California to become the sixth state where a woman’s vote was equal to a man’s — even though it would be another nine years before the 19th amendment assured that right for women across the whole country.

Whatever strength it has, whatever influence upon the citizenship of California, whatever ability to exalt truth and uplift justice, The Call pledges to the support of senate constitutional amendment No. 8 — the amendment whose ratification means the enfranchisement and emancipation of the women of California.

This pledge is no concession, no yielding to popular sentiment. It is given as a matter of duty, of right, of equity. The Call will seek no credit for doing the plain duty of an honest newspaper. It will seek — and it shall have — opportunity so to discharge that obligation as to make its performance of the highest use and widest benefit to the women of California — to all womankind.

It is a simple enough alteration of the state’s organic law that is to bring about this great change. Amendment No. 8 merely takes out of the constitution a sex adjective and puts into it the alternative sex pronoun and so abolishes the anomalous and indefensible distinction between the human rights of the being born male and the being born female.

In form the change is trivial. In effect it is tremendous. A few little words cut out of the law, a few put into it and every California woman is the political peer of every California man. That little change of little words accomplished and California is set squarely in the forefront of civilization with those states that have wiped out the old, absurd, shameful discrimination against the best there is in humanity. 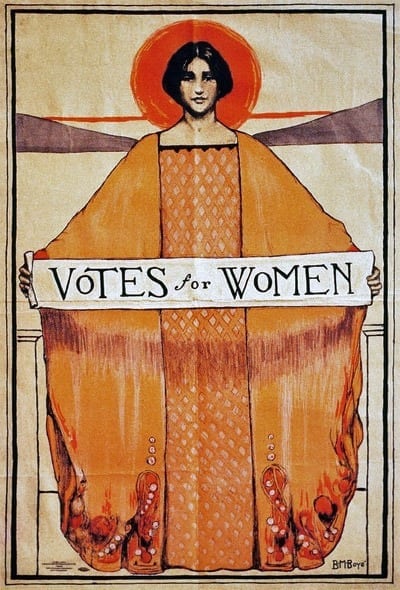 Amendment No. 8 takes California from the dark ages to the light, sets her free from a discreditable tradition of skin-clad, bone gnawing barbarism.

No question fairly arises, no issue may be justly joined as to the political or economic effect of this amendment. The Call has no patience for that sort of argument. If there were lawful room for debate on that score, then the decision must be inevitably and overwhelmingly for the woman. Nobody asks what the effect upon the body politic will be when this or that male or class of males comes into his or their political heritage. Nobody can doubt what the effect will be when womankind comes into its political own, so long and unjustly denied.

There never was a bad cause or wrong principle that had not reason for wanting to keep the woman out, nor was there ever a good cause or right principle that did not want — and get — the help of womanhood. Unfailingly, from the daybreak of history to its noontide, the woman’s influence has been for the good and against the bad in every concern and activity of the race. The woman’s jewels have paid for the discovery of a new world and a new freedom; the woman’s hands have woven the banner of a new civilization, built its temples and kept its altar fires burning; the woman’s mind and soul have inspired every crusade of religion, patriotism and morality since humanity began to walk upright and see God behind the stars.

Frankly, as any right minded man must admit when he is alone with his conscience, the stock arguments against admitting women to the full prerogatives as well as the full obligations of citizenship are sheer sophistry. Especially in this land of the free — free males and females — and this home of the brave — brave males and females — we have glorified Woman, almost deified her. We have made a queen of the traditional squaw; converted her wigwam into a palace; given her servants to chop the wood, chew the buckskin and take care of the papoose; even turned over to her the eagle feathers and the wampum belt — but the tradition of her squawhood as to a voice in the council has curiously persisted. The American woman is empress of the American home, but the ballot box she may not come near — that ark of the masculine covenant.

It is a queer and self-contradictory condition. We cherish our women above all else we have. As mothers they are — and rightly — idealized, idolized; as wives they are our second and better selves; as sisters and daughters their honor is more than our own. We have educated their bodies and their minds until there is no physical or intellectual exercise or employment in which they may not compete with us on even terms. They are fit, and nobly fit, to mother us and teach us, to wive us and to bear us and rear us sons and daughters of our bodies. But when the election bonfire burns and the voting shack is set up — then they revert to squawhood. 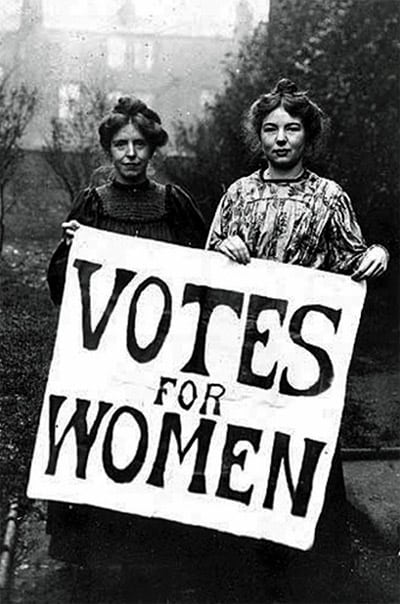 After all, let us admit that there is nothing very difficult about the exercise of the franchise, nothing so very profound in the knowledge that underlies — is supposed to underlie — this supreme privilege and dignity of the male American. What male of us knows, except through his newspaper or his sample ballot, who is running for senator or assemblyman in his district? Any woman can read a newspaper or a sample ballot as intelligently as any man. How many “native male citizens” among us can tell offhand who is lieutenant governor of California now and who held the job last year; who is railroad commissioner for this district; how his senator or assemblyman voted on the eight hours for women bill? These are elementary questions. Is there anything about them or any question like them that the female mind can not grasp as well as the male?

Nor is there anything in the franchise or its exercise to smut the sanctity or detract from the dignity of the most carefully sheltered womanhood — nothing in the ballot or its use inconsistent with the woman’s purity or gentleness or usefulness in any of/her relations or functions. If there were, if the ultimate privilege of citizenship involved rough, dirty work, fit only for the ruder hands of men, then that fact alone would be reason enough for letting the women into the temple for the purposes of house cleaning and decency.

The voter must register and in so doing rub elbows with all manner of men. Women stood in the bread lines of 1906 and kept their white purity unsullied; women stand in the lines at theater and railroad ticket offices and thereby take no harm to their womanhood, lose nothing of womanliness.

The voter must go to the polls and mark and cast his ballot and there meet men he sees at no other time. The woman — the best of women — goes to the grocery store and a good while ago we took the ballot box out of the grocery store because the surroundings were thought unwholesome for our politics.

So all the old barriers raised between woman and the ballot box fall by their own weight, the old arguments reduce themselves to absurdity. There is no escape from the conclusion that woman, bound to obey the laws and support the officers of the law, is entitled to an equal voice in the making of those laws and the selection of those officers. It is impossible to get away from the fact that the being fit to be the mother of “native male citizens” is fit for any privilege her sons may have.

The hour strikes for the liberation of California’s women from a hypocritical helotism. The Call wants a share in the righting of this ancient wrong. To that end it will give its columns daily and freely from now until October 10 — there is no need to set an alternative date — to assist in the ratification of amendment No. 8. It will be ratified, but for the honor and glory of California we want the majority to be enormous — it ought to be a unanimous affirmative vote.

When the California man goes behind the curtain and marks his ballot let him think, as he lifts the stamp over amendment No. 8, that he is voting for or against the woman that bore him, for her freedom or slavery, for the righting or for the perpetuation of an old and cruel injustice upon her and upon the mother of every other man.

Put the cross in the right place — the “Yes” place — and put woman in her right place.